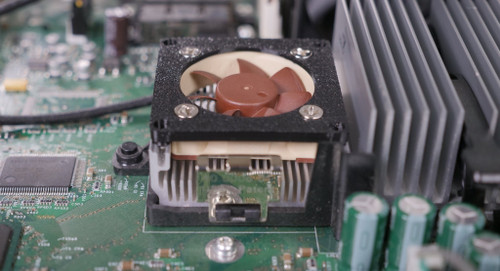 If you have a 1.0 version Xbox and want to replace it's GPU fan with a Noctua, these is what you want. I designed this GPU fan adapter plate for the original Xbox to allow you to use a 40mm fan instead of the loud and proprietary original fan. This will only work on the 1.0 version of the original XBox. If your Xbox is a later model and has the larger GPU heatsink without fan, you can't use this (nor do you need it).

The GPU fan is on the small heatsink to the left of the large CPU heatsink. Remove the 4 screws holding it down and unplug the cable from the motherboard header. Toss the fan in the trashcan but keep the 4 screws as we will reuse those.

Mount a 40mm x10mm thick fan to the bottom of the fan plate. There is a cut out in the plate to provide enough clearance for fan. Use the new fan's supplied fan screws to mount it. Place the plate with fan over the GPU heatsink and it should sit down inside it and the 4 posts will rest overtop the heatsink fins. Use the original 4 screws to secure it down to the heatsink. Plug the fans 3 pin cable into the motherboard header. Reassemble your Xbox and you are done.