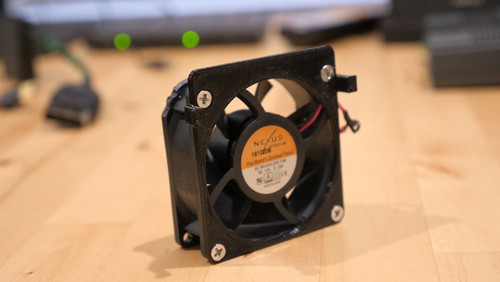 The Nexus 70mm fan seems to be a pretty common cooling upgrade for the original Xbox. The stock fan on the original Xbox is a proprietary 72-ish mm job that has a specific shape and has these tabs that secure it into the back of the console. However there is no normal way to mount a replacement fan back there.

I designed this adapter to mount the Nexus 70mm to it and then it slides into the notches on the back of the case to secure the fan. The fan will still be secured by the two standing tabs in the bottom of the console, however this bracket keeps the fan tight against the back of the case and stops it from moving around.

Be careful when inserting it as you can still break them if you just force it it. With a little care, it will hold up to multiple insertions and removals. Just don't gorilla force it.

Note: You will still need to remove the two rear mounting ears on the Nexus fan to clear the plastic hard drive tray/duct in the Xbox. This bracket just gives you a way to properly secure the fan. The bracket mounts to the fan with standard fan screws.

On Sale! Out of Stock