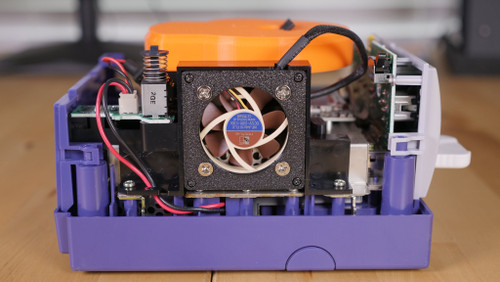 Are you looking for the ULTIMATE Gamecube Noctua fan mod? Well, you came to the right place. I designed this fan adapter plate for the Gamecube to allow you to use a 40mm fan instead of the loud and proprietary original fan. The Ideal fan is a Noctua 40mm (not included).

Remove the 4 Gamebit screws (4.5mm) from the bottom of the Gamecube. Lift the top of the Cube off and place to the side. The stock fan can be removed by removing it's 4 screws and unplugging it's cable. Set the screws aside as you will need those later.

Take the 40mm fan plate and attach a 40mm x10 thick fan to the rear of it in between the standoffs. Use the screws supplied with the fan to attach it to the plate. I would position the fan in a way where as the fan cable is on the top side.

Place the plate in the Gamecube fan opening and secure it using the 4 original screws that you removed from original fan. Route the fan cable up and through the slot in the top of the fan shroud. Use the supplied fan adapter to plug into the new fan's 3 pin connector and then plug it back into the Gamecube power board. Reassemble the Cube and you are done.