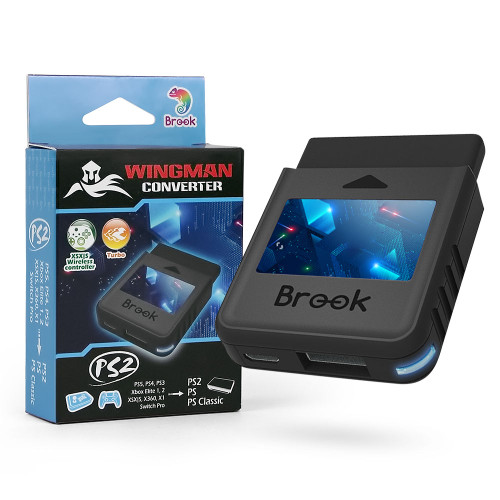 Advanced features such as Turbo and Remap functions are included to enhance your Playstation game playing experience!

OVER 125 WIRED AND WIRELESS CONTROLLERS SUPPORTED!

The miniature, almost memory card sized adapter packs a massive feature set.  The included USB A port on the Wingman PS2's body will accept wired gamepads and arcade sticks from a wide variety of modern consoles and generations: Playstation 3, 4, and 5; Xbox Series X|S, Xbox One and Xbox 360; Nintendo Switch.  For those who prefer wireless control, you can connect your modern wireless controller to the Super Converter via Bluetooth.

There were hundreds of titles on Playstation 2 that utilized vibration for special effects during gameplay.  You can have the same experience on any supported PS3/PS4 gamepads thanks to the Wingman's vibration support. Looking for auto-fire games in didn't originally support it? Wingman also covers this with five turbo levels!

For those who often play on PC, the Wingman PS2 Super Converter features a mini USB output.  You can connect a mini USB cable to your computer and utilize the converter's Xinput support to control modern titles.  Additionally the PC connection is used to upgrade firmware when necessary.

The Brooks Super Converter has several convenient features to improve the control experience.

In addition, the Brook Super Converter is firmware upgradeable, which can be used to improve functionality, and add new features.  Firmware updates are performed by attaching your device to a Windows PC, or Mac with Boot Camp partition or Parallels Virtual PC software.

The Brook Super Converter comes in its own professionally designed box.  In the box is the device; instructions are accessible via QR code on back of the box.