Filling in the blanks

And then there were four. Four shelves is all I have left to work with, but it’s also all I have left to do before it’s done. It’s strange, I’ve had my whole life to plan for these shelves, and now that they're here I’m spending an absurd amount of time figuring out what’s actually going to go on them. It really is nuts to think of all the little details that go unnoticed when your stuff is all boxed up. That some Super NES games have the text upside down, some have the 4 button icon on the spine, it’s crazy how there wasn’t an actual standard. The only thing it seems was really a necessity when creating a box for an older platform was that it be the right shape and size. Everything else was just “eh, do your best.”

Anyway, like I said I have four shelves left, and Nintendo 64 and the Game Boys to display. So let’s get right to work on Nintendo 64.

I like N64, but it’s no secret it’s my least favorite Nintendo console. However, I loved their box design, and they look amazing when they’re all lined up. I decided I should go with the blue side because blue is my favorite color, and since I don’t have a gigantic CIB N64 collection, it shouldn’t be too hard to just get my favorites up there and move on.

But like everything else, there’s a freaking wrench in the monkey works. Zelda. 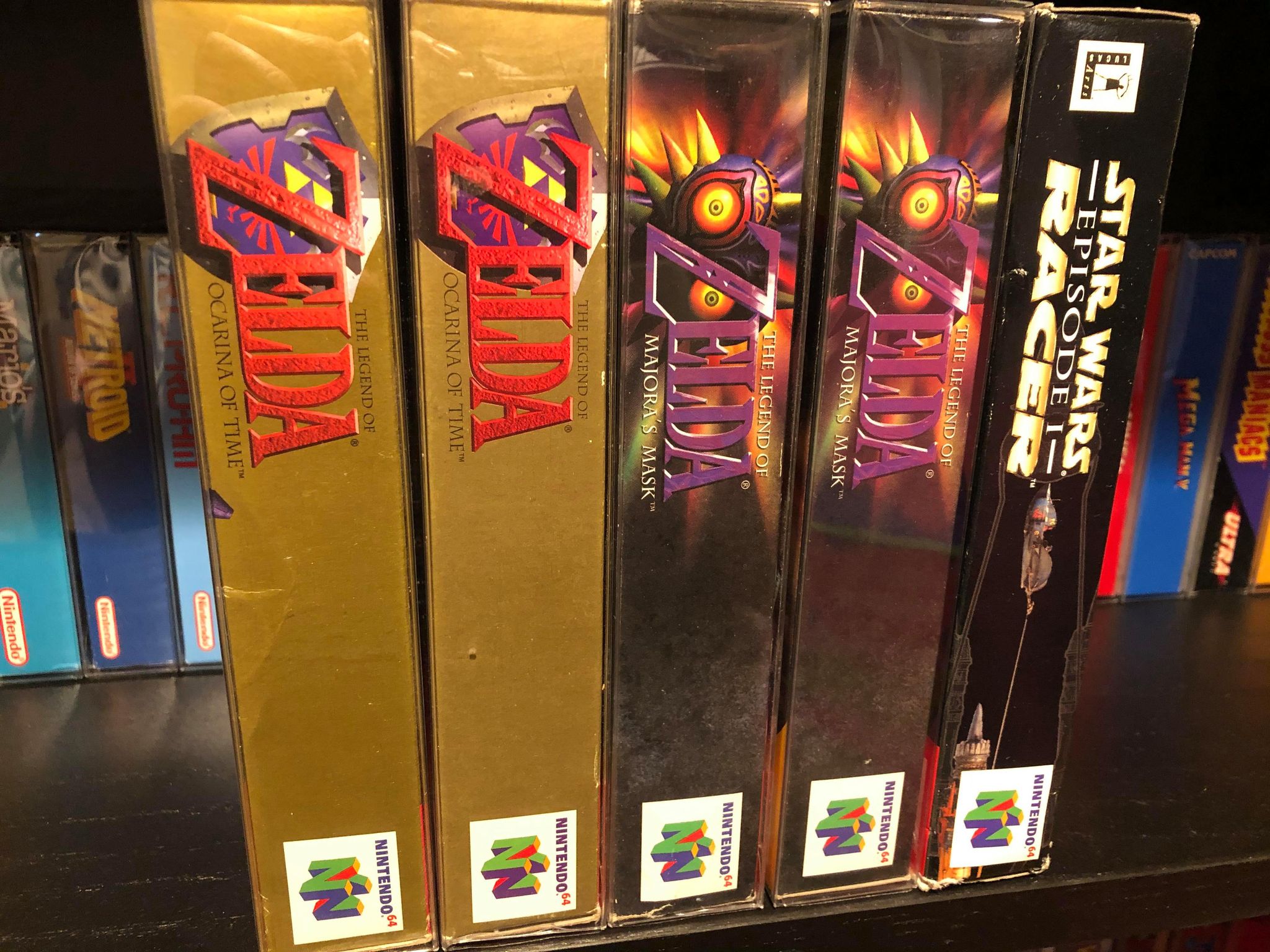 Ocarina of Time and Majora’s Mask completely ignore the standard N64 box color scheme, because of course they do, and there’s simply no way to make them look nice on the shelf. Not even placed at the end. They look awful. Same goes for Star Wars Episode I Racer, but I’m hardly heartbroken over that one. Zelda though, that kinda stings.

Zelda is my favorite game franchise, and my Zelda collection is something I’m quite proud of. (I believe I have every unique US Zelda release with the exception of the Zelda Mini Classic LCD handheld, but that’s more or less just a recreation of the original Zelda Game & Watch so I’m not too broken up about not having it since I have the Game & Watch. Still, it’s a thing and I don’t have it…) The point here is, it’s a bummer to me that Ocarina of Time, a game I genuinely love, just doesn’t work on my display. I’ll have to figure something else out.

Anyway, this left me a few extra spaces to work with, and unfortunately still just a few paces shy of getting everything I wanted on the shelf. It’s definitely not enough for 2 shelves, and even if it was there’s way too much Game Boy stuff that I want to display more, so some tough choices were made. I think it’s a nice representation of my taste in N64 games. It’s games I like, games I love, and games I’m fascinated by, which explains how the genuinely bad Earthworm Jim 3D made it up there. That game is just so intensely bizarre. 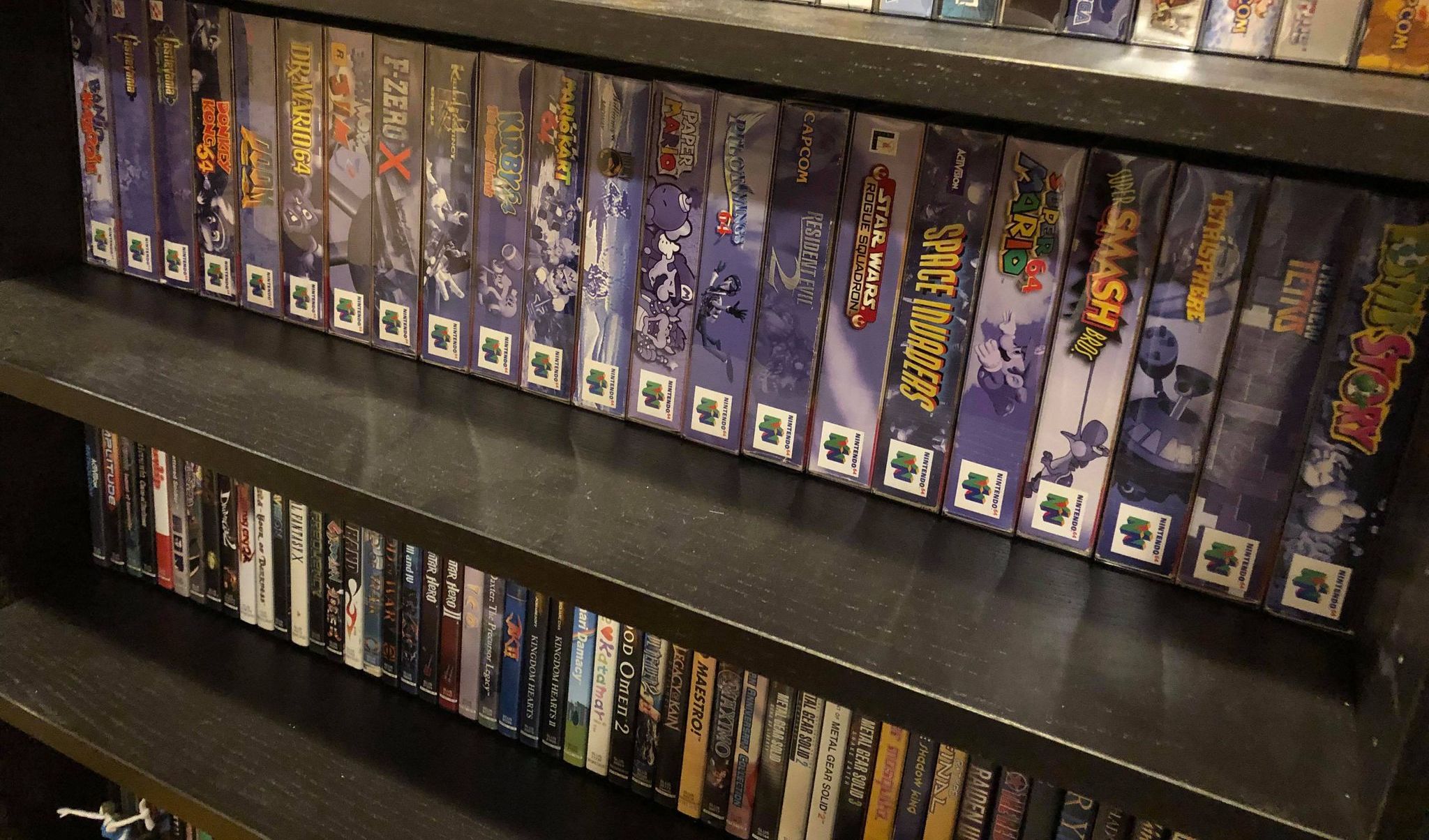 So at last, we have arrived at the last three shelves. It’s time to start making sense of my Game Boy stuff.

I love Game Boy. I love it so freaking much. I’ve always been more of a console gamer than a handheld one, but the games on the Game Boy are fascinating and often overlooked pieces of franchise history. Kid Icarus: Of Myths and Monsters, Balloon KId, Donkey Kong Land, the list goes on and on. There are so many incredibly impressive and fun games on these platforms, and not only that, the box art is some of the best of all time. So paring this down to the bare essentials was going to require some serious thought, (or so I thought).

There are four platforms here I feel strongly about representing, Game Boy, Game Boy Color, Game Boy Advance, and Virtual Boy. I have a full US set of Virtual Boy games (Nester’s Funky Bowling and Mario’s Tennis have repro boxes, but other than that all 14 are CIB) and while that sort of messes up my whole thing about only having one platform per shelf, it’s a hardline stance I’m not willing to cave on. Virtual Boy is one of those things I have an irrational love and fascination with, and it will be on display. 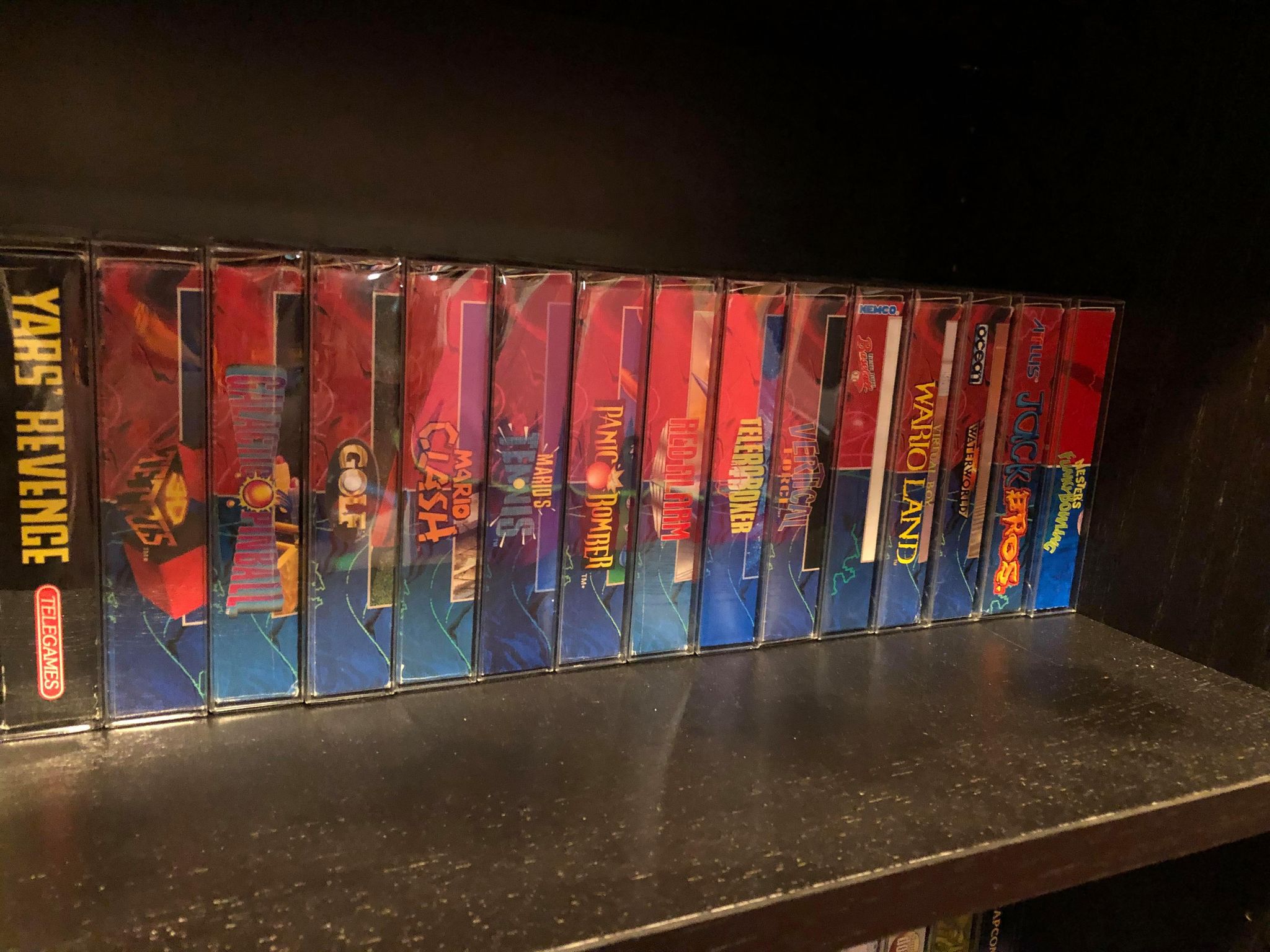 The good news is, the numbers on the remaining platforms really helped this work out. Top row is all Game Boy, and mostly stuff published by Nintendo. Like the other Nintendo platforms, their stuff lines up brilliantly and makes for a beautiful colorful presentation. The remaining space on the shelf goes to my favorite third party offerings, which sadly includes very little in the way of Castlevania and Mega Man because whoo boy, finding boxes for those games is EXPENSIVE. I’m leaving a lot of stuff packed away here, but I’m happy with what’s here. 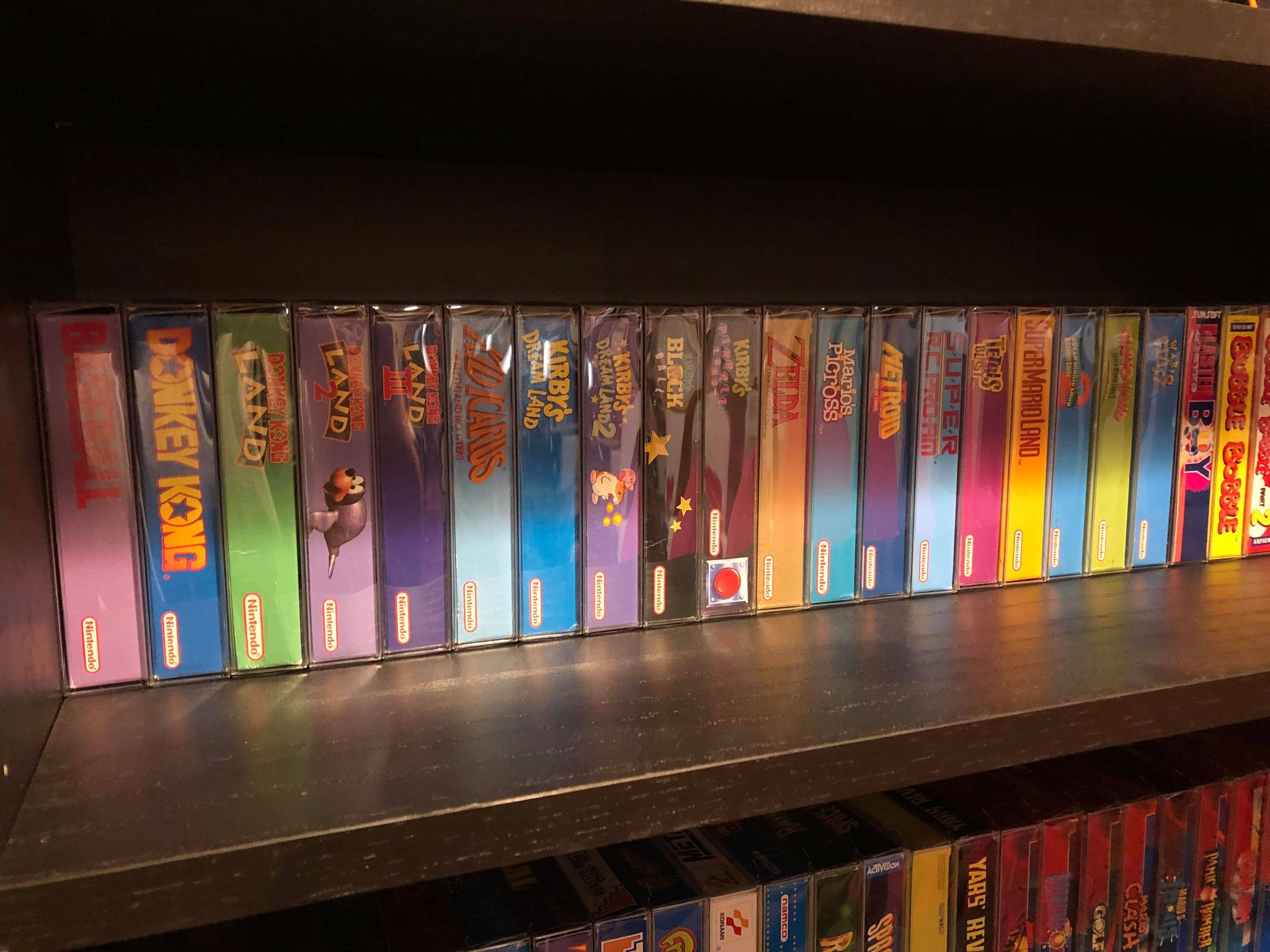 The next row gets Game Boy Color and Virtual Boy. I don’t have an abundance of CIB Game Boy Color games, so I really didn’t have to leave much of anything of consequence behind. I do with the spine on Blaster Master: Enemy Below wasn’t quite so ugly, but whatever. 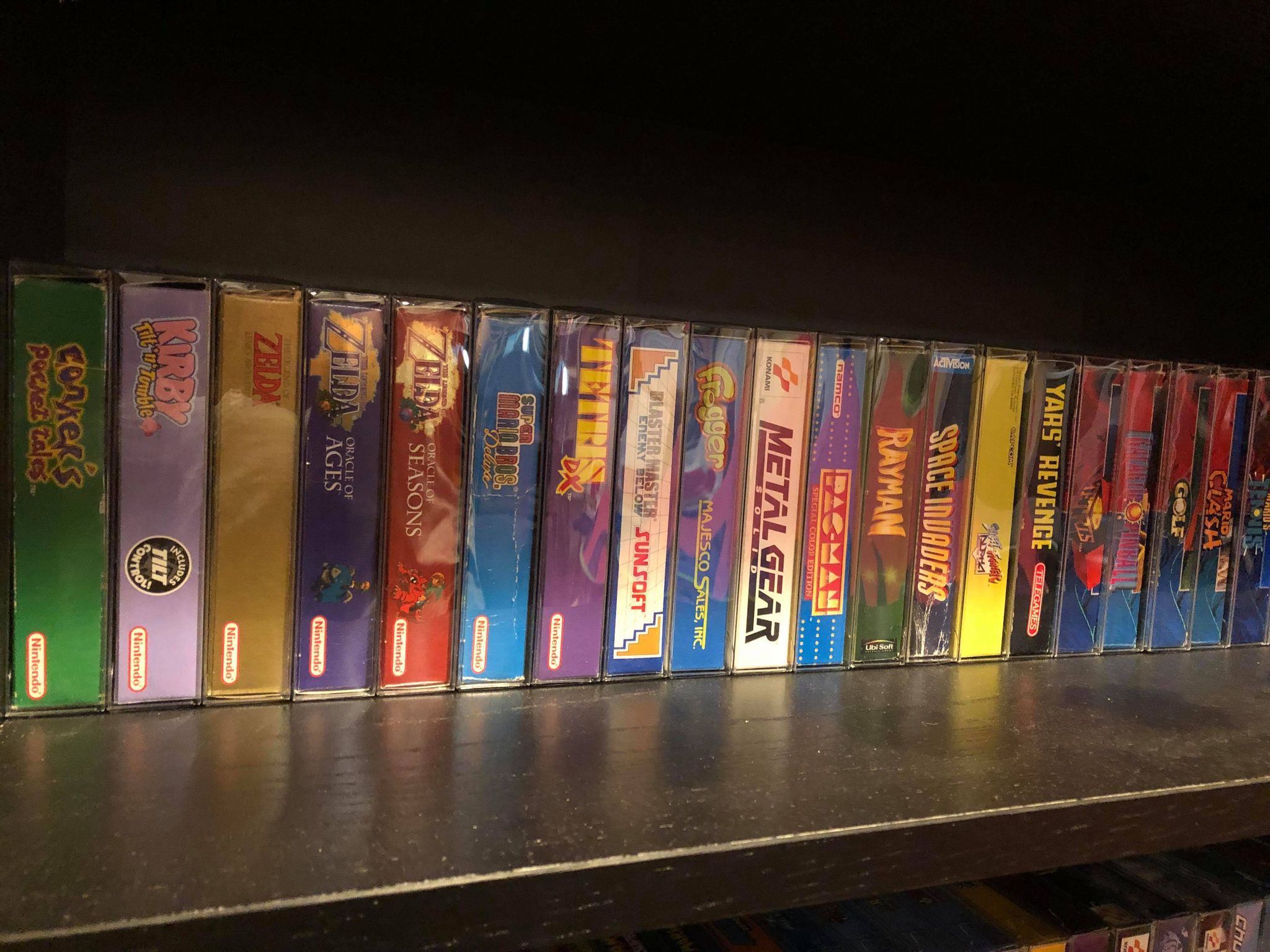 Finally, we have Game Boy Advance. Another platform that I keep forgetting how much I actually love. Once again, keeping all the Nintendo stuff together was a good look, and I really didn’t have to leave much aside since I don’t have quite as much boxed GBA stuff as I thought.

Honestly, I can’t believe how well that worked out. I really thought that was going to be a heck of a lot tougher. 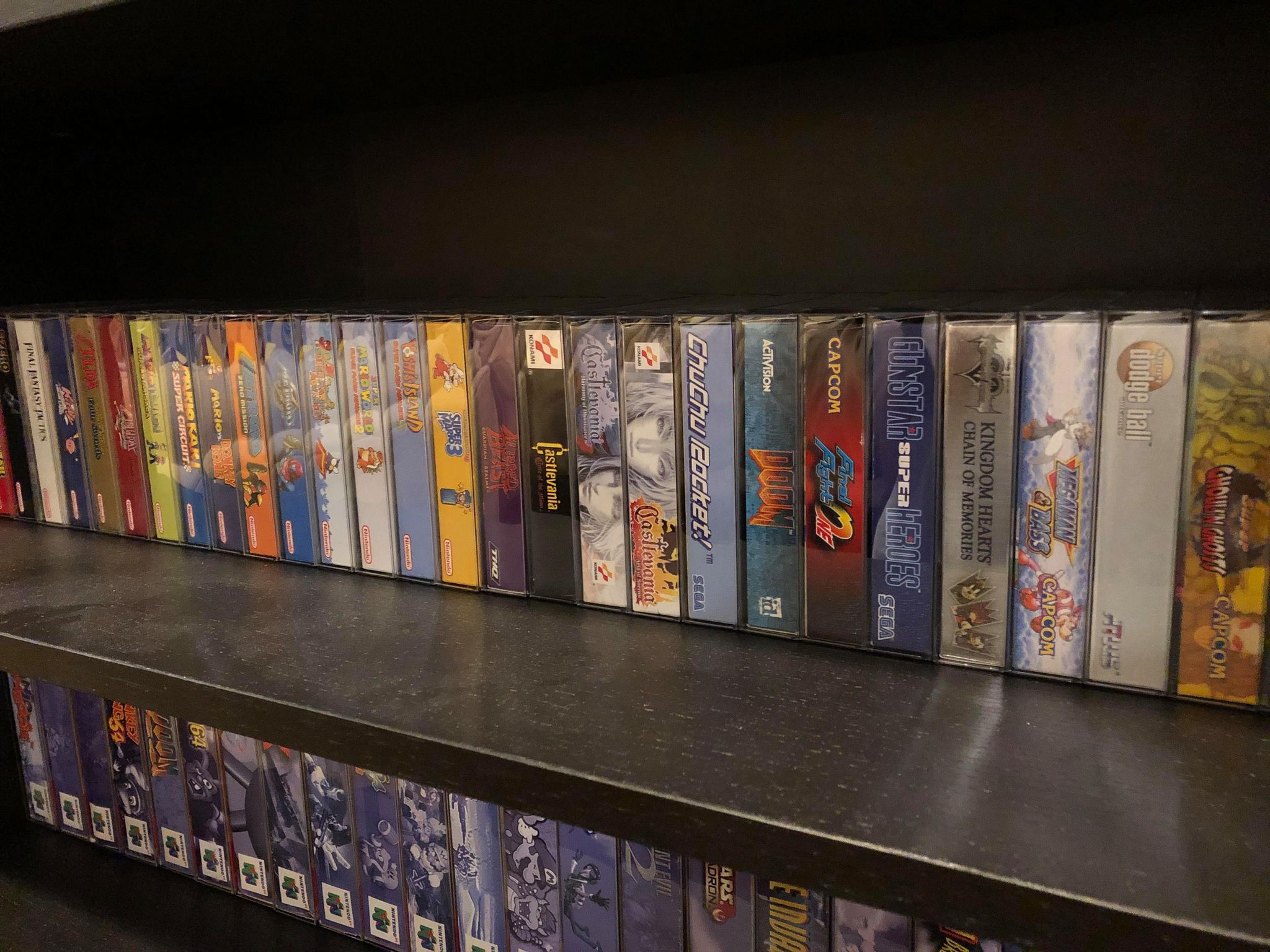 And there you have it, my library on display. I’m really happy with the way it came out, but there’s still much to be done. Before I get around to covering these bad boys with amiibo, I want to get my consoles all sorted. If the shelves I bought look half as good as I’m imagining they will, this is going to be great.