A Nintendo Wii U Story...

The Wii U's issues are many, and they're all very well documented. From the terrible messaging, the flat-out stupid name, the 3rd party woes, to the giant noose that was the expensive Gamepad, there isn't much to be said about the Wii U that hasn't been said to death. The majority of folks who actually own one love it, but while it's honestly home to some of the best games released this generation, it never caught on with the gaming community at large. In fact, it's Nintendo's worst-selling home console to date. So, why in the world is it one of my favorite game systems of all time? 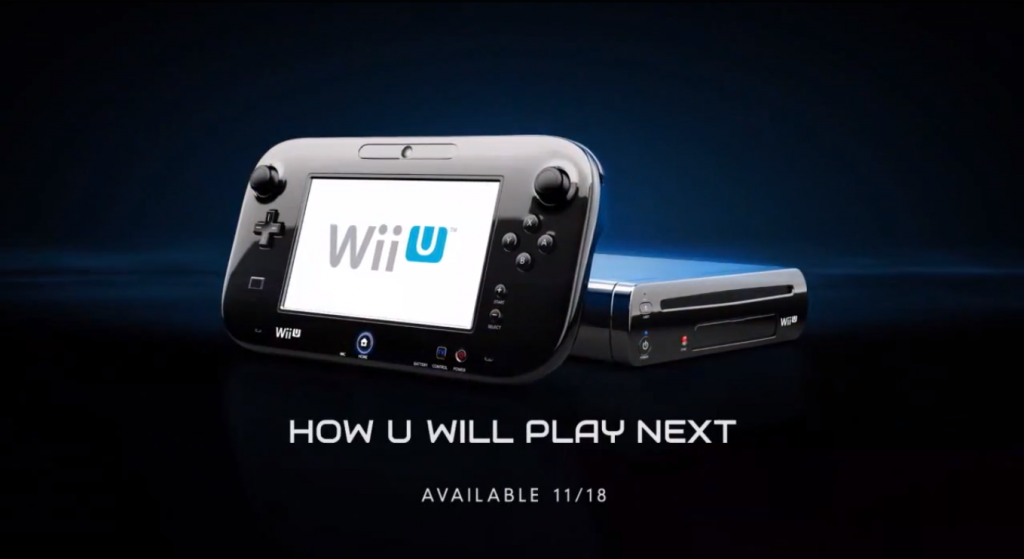 It was, in fact, how I played next.

It all comes down to the story.

As you may recall, it was through an unbelievable stroke of luck that I wound up with a 3DS to call my own, but when it came time to start preparing for the Wii U's launch, I couldn't expect one to just fall into my lap like last time. If I was going to get one on launch day, I would need to figure out how to make it happen myself, but life found some ways to make that somewhat difficult. Besides our finances still not being stellar, my wife Karen and I had started talking seriously about having kids, and if that was going to be our new reality, tossing $350 at a new video game console simply wasn't a responsible thing to do.

But where I was more or less okay with holding off on the 3DS, the Wii U was something else entirely. Nintendo games were finally going to be in HD. A new Smash Bros was on the way. Runner 2 was on the way. There were games coming both at launch and down the pipeline that I was very, very excited to try. I thought the Gamepad showed remarkable potential, and I was absolutely pumped for the system's release. But I tried my best to keep that to myself, because every time I thought about adding a kid to our lives, there didn't seem to be room for a new video game system too.

After mulling it over, I made the decision to not get one at launch. I was going to wait until after the whole kid thing happened and then figure out how to fit a Wii U into our budget. I had plenty of old video games to keep me busy, and it was the responsible thing to do. I told my wife my plan, and that was that. It was a decision I was proud to make, but as the launch date grew closer, it certainly wasn't the easiest one to live with.

However, I should never underestimate the awesomeness of my wife. What I didn't know that was almost immediately after I told Karen about my decision to not buy a Wii U, she decided that that was not okay. Without me knowing, she hopped on Facebook and sent out this message to a group of my closest friends.

"Gentlemen, we have a problem.

Today, the launch date and pricing were announced for Nintendo's new console, the WiiU. Due to our financial constraints, Kris has made his peace with the fact that, not only is this the first Nintendo console in a long while that he won't be getting on launch day, but he believes he won't be getting one at all.

Frankly, this is ridiculous and cannot stand.

I want to make sure that there is a shiny new WiiU under the Christmas tree for this guy. He works really hard and few things would make him happier. So I'm asking, if you were planning on finding a Christmas gift for him, buy him a WiiU.

OK just kidding:) I'm taking up a collection. Whatever you want to give. You can slip me cash next time I see you or you can paypal me. I will be sure to let him know every single person who contributed to the gift and you can all expect big sloppy manhugs from him after Christmas. I'm aiming at getting the deluxe 32GB model, which is $350. Whatever I collect in donations is great and I'll make up the rest any way I can. Except prostitution. I'm pretty sure he doesn't want one that badly :) The great thing about this plan is that we have 3 months to come up with the dough.

If you can't contribute, I understand completely. Times are rough, we know it as well as anyone else. But even if you can't give, do me a favor and don't mention it to him. It's been a while since I was able to give him a good surprise and I'd like to keep it that way.

Gentlemen, thank you for your time.

PS If you know of anyone else who might want in on this, feel free to include them. I only wanted to send this to the people I felt comfortable asking for money, but maybe you know someone who wants to help that I don't."

Funds quickly came in to cover the console, and the decision was made to change it from a Christmas present to launch day because they thought I might just break down and impulse-buy it myself, citing "It's Nintendo, and it's Kris, that's a dangerous combination." After lots of planning, preordering, money-gathering, and keeping me off the scent, the deed was done. The console and a few games were in-hand, and it was time to melt my brain with kindness.

I worked my shift at the comic book store on launch day with a cloud of sadness around me the whole time. All I could think about all day was how much I would rather be at some sort of launch party, or sitting on my couch playing the new Mario game, but instead I was working. I knew in my heart I was doing the right thing, but I was bummed for sure. I got in my car and headed home knowing that at least I had an awesome taco dinner to look forward to, and prepared for an evening of not obsessing over the fact that I didn't get a Wii U. Nothing seemed out of the ordinary when I pulled into my driveway, since my friends all parked away from my house as not to arouse any suspicion.

When I opened my door, I saw several of my friends sitting on my couch and I was completely surprised. I immediately put together that my wife, in an effort to cheer me up about not getting a Wii U, had arranged a game night with my friends. That was quickly confirmed by my friend Mauricio who suggested we play some Smash Bros., Four Swords Adventures, or whatever I want. Then my friend Tony said "or we could play this." and he pulled a brand new Wii U out of a bag he had next to him. 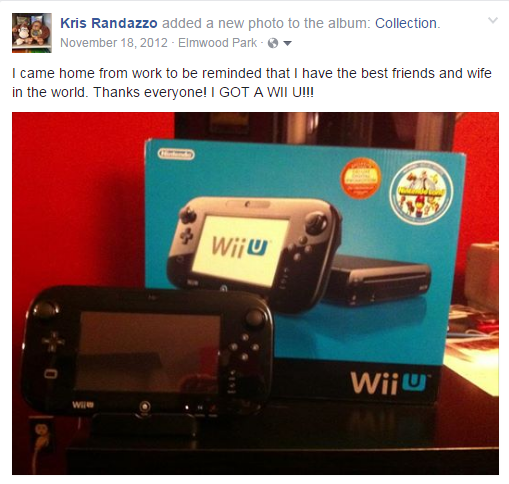 I lost my mind. I don't even remember what I said or did for the next few minutes because in my head I was the Nintendo 64 kid. I was overwhelmed. I still can't believe it happened. They got me a Wii U deluxe model with Nintendo Land, New Super Mario Bros. U, Scribblenauts, and ZombiU. We played Nintendo Land until we physically couldn't anymore. We played some Mario too, and it was glorious. Seriously though, Nintendo Land does not get the credit it deserves. That game is an absolute blast and still one of the best local multiplayer games I've ever played.

I still remember that night as one of the best of my life. I don't know what I did to deserve friends as good as these, but I will never forget that incredible act of kindness. 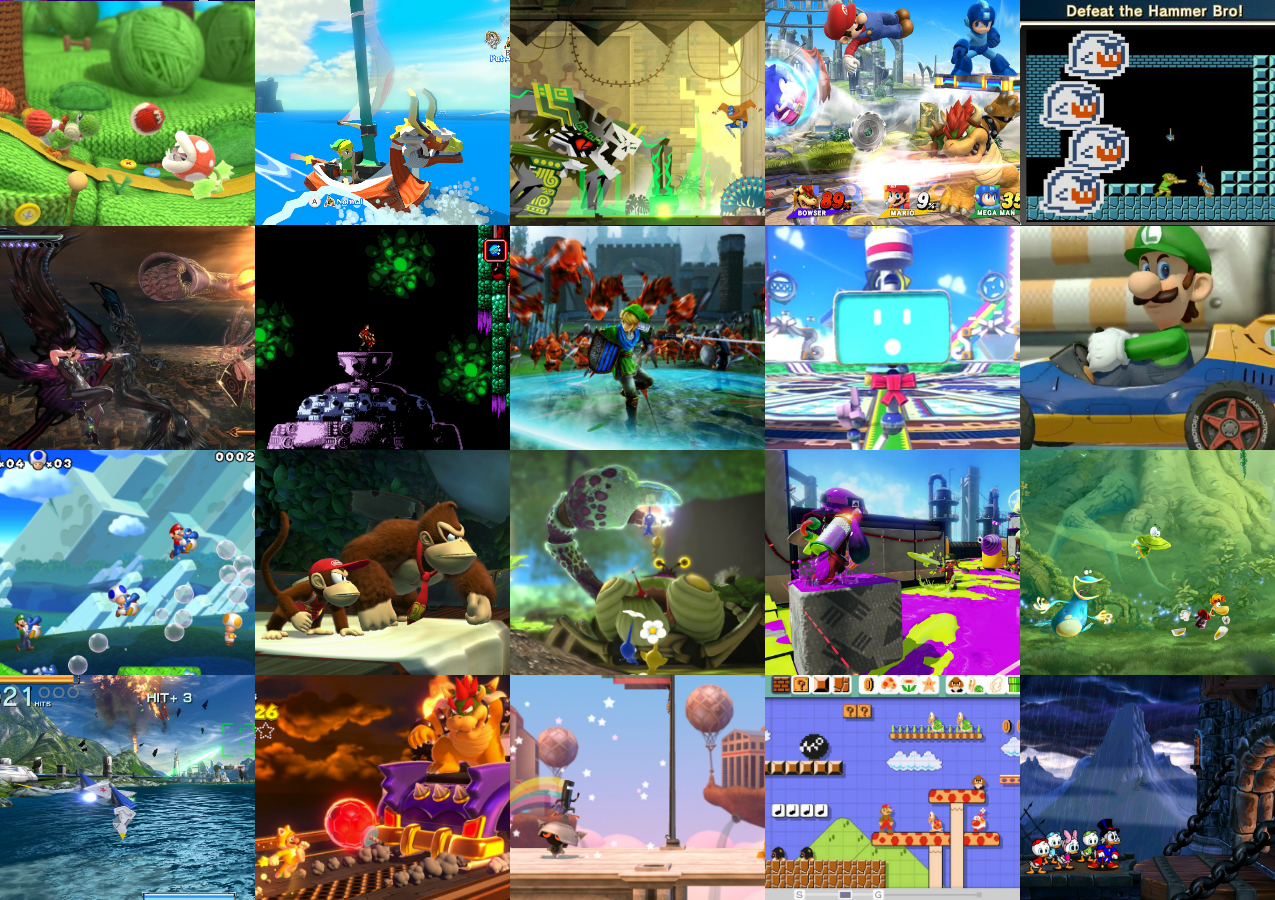 A small but brilliant library

So why do I love my Nintendo Wii U? I could talk about all the amazing games I played on it, all the fantastic local multiplayer parties I had over the last few years, but honestly, it's that story. That there were so many people willing to pitch in so that I could get the new Nintendo system on launch day, it's one of the nicest things anyone has ever done for me. In the grand scheme of things, it's just a video game console, but if I've illustrated anything from writing all these posts it's that Nintendo games mean a lot to me, and thanks to this story, the Wii U will always be one of my absolute favorite game systems.

To anybody who took the time to read these posts, thanks for doing so. It was a fun trip down memory lane for me, and hearing some of your stories too has been a real treat. This Friday I'm going to have a brand new story to tell with the launch of the Switch. It's going to be a good time, but honestly, my Wii U story is going to be a tough one to beat.

What’s your Nintendo Wii U story?