The status quo for Nintendo home consoles had been off for a while. The Nintendo 64 may have technically been twice as powerful as the 32-bit consoles on the market, but that point never really managed to come across in the games. Low resolution textures and blocky characters were the order of the day, and thanks to Nintendo's clinging to the cartridge format, 3rd parties fled their platform in droves in favor of the immensely popular and easy to develop for PlayStation. The only other "console" we had from Nintendo at the time was the Virtual Boy, and that was, well, what it was.

But time marched on, and when the Sega Dreamcast hit, it opened the door for 3D games that didn't look like garbage, and my mind immediately started imagining what Nintendo's next generation console would look like. I was not disappointed. 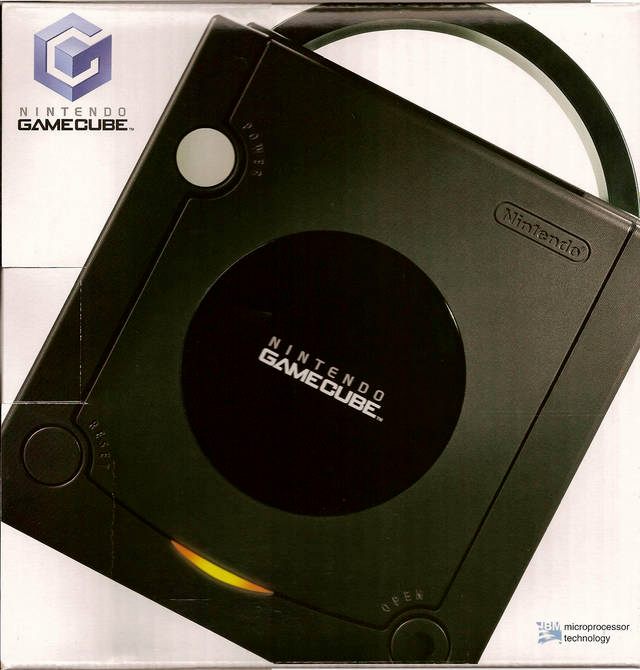 I first started hearing about the "Dolphin" not long after the Dreamcast came out. But at that point, all I had to go on was imagination. It really was an exciting time because thanks to my newfound appreciation for non-Nintendo platforms, I was able to fully appreciate what everyone was doing, and even if it wasn't all for me, it all looked pretty fantastic. The PlayStation 2 was looking like an absolute beast, so much so that even the mere hype of the PS2 was enough to cause a drop in Dreamcast sales, and Microsoft was getting ready to toss their hat into the ring with a behemoth of a system that was going to play host to the next Oddworld chapter (a big deal to me at the time). However, more than anything else, I couldn't wait to see what Nintendo was going to have in store. Then, in 2000, Nintendo hosted their annual Spaceworld event, and they showed off this demo reel.


I didn't see this footage when it first came out. The only thing weaker than my internet prowess back then was my paltry internet speed. I was barely aware of what the "information superhighway" had to offer, and I was certainly not aware of websites dedicated to video game news. Like I said in my Game Boy Advance post, it was that promotional poster I got at FuncoLand that gave me my first glimpses at these games. But one day, I went on a trip to transfer some inventory to a neighboring Funco in my district and I saw something strange sitting on their counter. It was a GameCube, except it was made out of paper.

I asked the guy behind the counter where he got it and he told me he printed it off of a website called cube.ign.com. This was the first time I heard of IGN, and when I got home later that day, I learned just how incredible the internet could be for learning about upcoming video games. I fired up my trusty dial-up modem and hunkered down for the excruciatingly long wait to download the GameCube sizzle reel. As amazing as those still shots on that poster were, seeing them in motion was mind-blowing. Luigi was getting his own game? They were making Metroid again, and it looks like THAT??? THAT LINK/GANONDORF FIGHT?!?!???!? My mind nearly exploded thinking of what the rest of those games might actually look like. 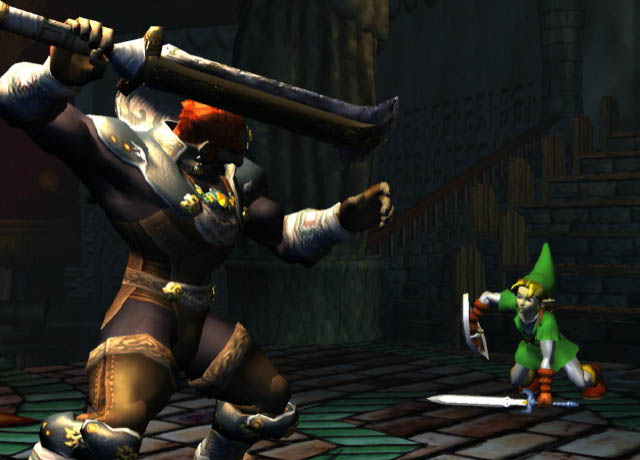 I've worked in game stores for a number of console launches, and they've all gone pretty differently. The Dreamcast was a gigantic party. Everyone who wanted one got one, and everyone bought a short stack of games and accessories to go with it. The PlayStation 2 launch was the saddest day I've ever worked in a game store. Our store got a whole 2 units, and one of them went to a guy who only wanted to resell it immediately. The other guy looked at the wall of launch games and said "I'll take Madden, and uhh... I guess... Tekken?" Nobody was excited about anything, nobody got what they wanted, everyone was sad or mad, and while the PS2 eventually became one of the best gaming platforms in the history of the universe, that launch day was just pathetic.

The GameCube launch day though, was a lot more like the Dreamcast. We got a ton of units, most of which were preordered, but there was a small number for walk-ins as well. We had folks lined up out the door, and everyone was just incredibly happy to be there. Some got purple systems, others got black, most people bought Luigi's Mansion, and just about everyone bought Rogue Squadron II. After we closed, I bought my system with one extra controller, a memory card, Luigi's Mansion, Star Wars: Rogue Squadron II, Super Monkey Ball, and WaveRace: Blue Storm.

I had more than enough to keep me plenty busy on day 1, I knew online play was coming thanks to the announced modem adapters (LOL), I knew Metroid was finally happening again, Smash Bros was right around the corner, and finally, Nintendo was technologically on equal footing with the competition again. Unlike the Nintendo 64, 3rd party games looked comparable with their counterparts on other systems, but most importantly, Nintendo games were no longer ugly. Between this and the Game Boy Advance, I was a happy Nintendo fan again. 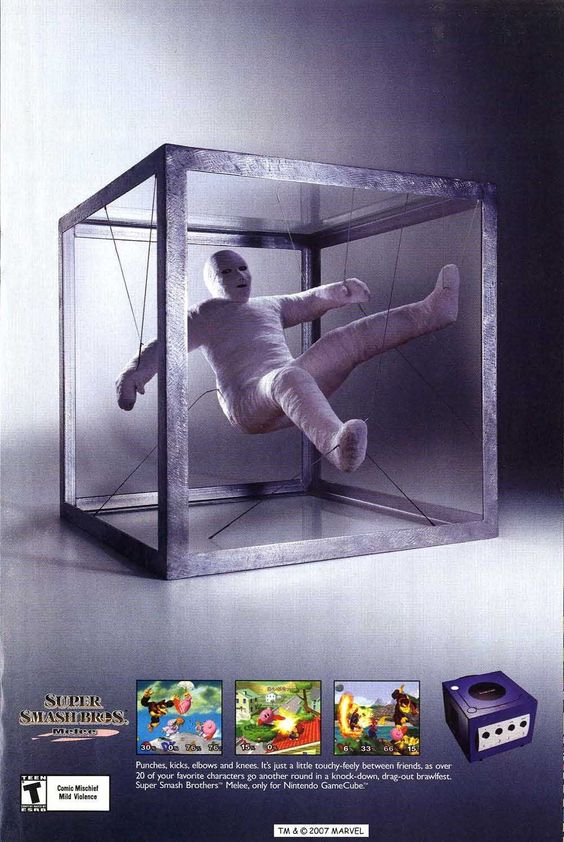 The GameCube's ad campaign was... weird...

Of course, things didn't go exactly as I had hoped in the long run. Nintendo had burned some serious 3rd party bridges with the Nintendo 64, and the GameCube's mini disc format forced some devastating compression issues on developers. In America, the GameCube came in 3rd that generation behind the Xbox and PlayStation 2 respectively, thanks in no small part to the system's lack of DVD playback and said tiny discs. But even as a 3rd place console, it was still fantastic, and provided me with more than my fair share of incredible games that I sunk inordinate amounts of time into.

It brought me the weirdness of Cubivore, the addictiveness of Animal Crossing, the awesomeness of Viewtiful Joe, and a taste of what the other consoles were enjoying with games like Beyond Good & Evil and Prince of Persia: The Sands of Time. Super Smash Bros. Melee and Mario Kart: Double Dash provided me with some of the best multiplayer experiences I'd ever had, and The Legend of Zelda: Four Swords Adventures, once I got around to finding enough people and accessories to properly pull it off, was on a level all its own. Eternal Darkness messed with my mind, The Twin Snakes brought Metal Gear back to Nintendo, and Link joined the cast of Soul Calibur II. Its library may not have been able to stand up against the downright mythical PS2 library, but I rarely wanted more while I had my Cube.

I also had a PS2 and Xbox during this generation, but I absolutely played more GameCube than the other 2. Of course, my PS2 got tons of use (and honestly, my Xbox kinda just sat there looking gigantic. No offense, just a lot of its library wasn't for me) but I was a proud Nintendo fan again, and that felt really good. 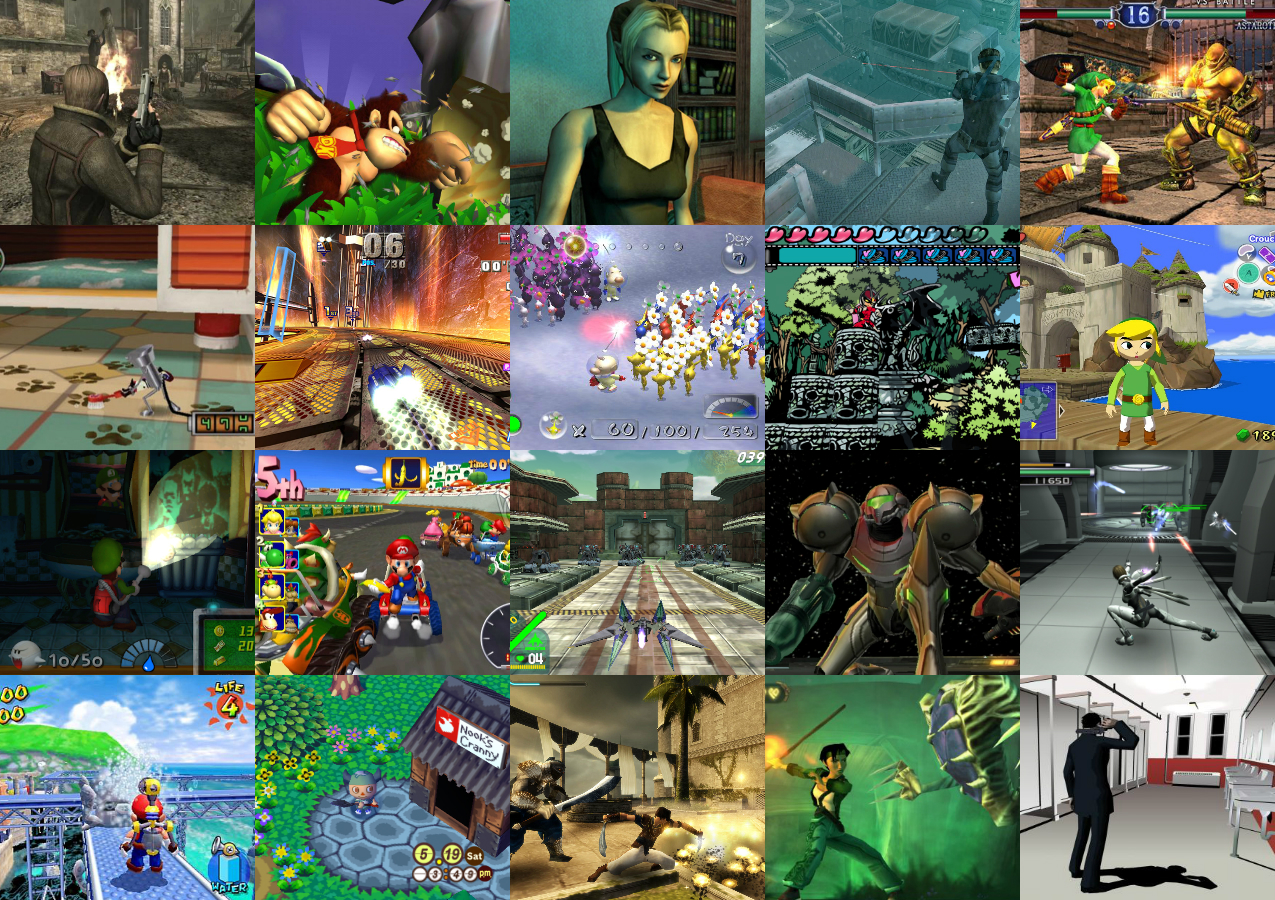 So why do I love my GameCube? More than anything, it's because it taught me a lesson I've tried to bear in mind as often as possible. It taught me that no matter how bleak things may seem, never count Nintendo out. There was a point during the GameCube's life cycle when I had really started losing hope for Nintendo as a company. We were finally getting a proper Mario game on the system, but it was about spraying water at things. We were finally getting a new Metroid game, but it was a first person shooter being made by an unproven American developer. And then there was this piece of garbage.

I still stand by this as being one of my least favorite trailers I've ever seen. Even judging it on its own without my initial bias, it's extremely childish. I've got nothing against games with a sense of wonder and fun, but when you've got Link actually winking at the screen, you've lost me. Then, if you take into consideration the Link fighting Ganondorf fight scene from Spaceworld 2000, going from that to this was just a tremendous disappointment. In fact, if you look at issue 148 of Electronic Gaming Monthly, I'm the letter of the month guy who is asking the fine folks at EGM to help me see a bright future for the company I loved in light of what I considered recent seemingly unbelievably bad decisions.

And you know what happened then? I wound up loving Super Mario Sunshine. Metroid Prime was nothing short of a masterpiece. And as for Zelda? The Wind Waker to this day is my favorite video game of all-time. At first I thought it was Looney Tunes, but when I played it, I realized it was Samurai Jack. When these games were announced, I was sure beyond a shadow of a doubt that Nintendo had lost its mind. They had become so completely out of touch with what gamers actually wanted that there was absolutely no chance that they would be able to continue competing in the console space. They were going to wind up going the way of Sega, and that would be a very sad day indeed.

Does any of this doom and gloom talk sound familiar? If you listen to the Stone Age Gamer Podcast, it might. I've been more than a little vocal about how I think Nintendo has put itself in a dreadful position with the Switch, but if the GameCube has taught me anything, it's to trust that the Big N usually knows what they're doing.

Of course, I can't really talk about the GameCube and not mention E3 2004. This presentation was Nintendo at their best, and we've rarely seen them in such fine a form since. They opened the show with a sizzle reel proclaiming "We make games that make games worth playing." They followed it up with Reggie's first time on stage as Nintendo of America's frontman, and then they gave us trailers for Metroid Prime 2: Echoes, Star Fox Assault, and the mind-blowing Resident Evil 4. They showed off Minish Cap for GBA, unveiled the Nintendo DS to the world, and even took a few potshots at their competition while they were at it. But nothing, and I mean nothing, compares to what many people (myself included) remember as the best moment to ever come out of E3.

Do you hear that crowd? That's the sound people make when Nintendo gives them exactly what they've always wanted. That trailer delivered on the promise of that original Link/Ganondorf fight from Spaceworld 2000, and it's since been known as the trailer that made grown men cry. And I have no shame in admitting that I was one of them. I was sitting in my roommate's bedroom in my apartment in Brooklyn. His computer was the one connected to the internet at the time (long story). I had worked all that day and didn't have any information on what was being announced at E3. I came home with the apartment to myself, and I watched the whole presentation from beginning to end.

I can't even begin to put into words the sounds I was making when I saw that trailer. The best I can do is say that it was a combination of disbelief, shock, and unbridled joy. Twilight Princess may not have turned out to be my favorite Zelda game by any stretch of the imagination, but at E3 2004, it was everything. It stole the show, proving to me again that even when things look the worst for the company, when they really want to, Nintendo can make magic.

It may have come in third during its generation, but in my house, the GameCube came in first.