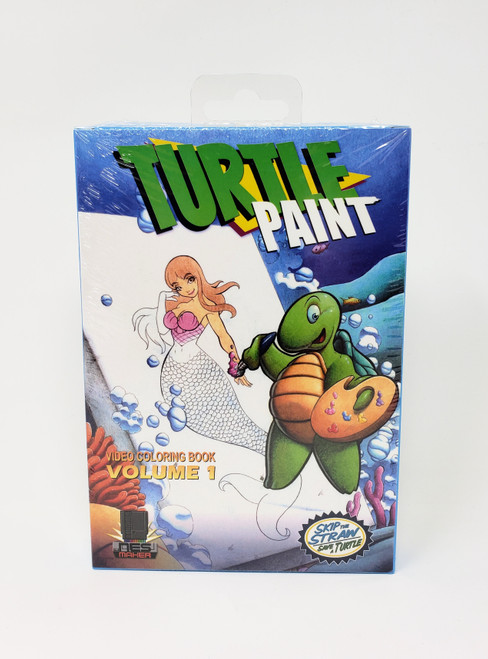 Turtle Paint is a new coloring program for your NES game system. Which begs the question: "Why a coloring program?"  Turtle Paint was born as a submission to the 2020 Byte-Off game jam. Inspired by the adult coloring book craze, the creator wanted to develop a similar relaxing, creative and even therapeutic experience for the classic NES. Surely no one has thought to do that before, right? (Spoiler Alert: They have!)

Actually, it is wrong to call this a game. There is no winning nor losing. The goal was to take the stress out of the player's mind and allow them to sit back, relax and create! There is no wrong way to play! 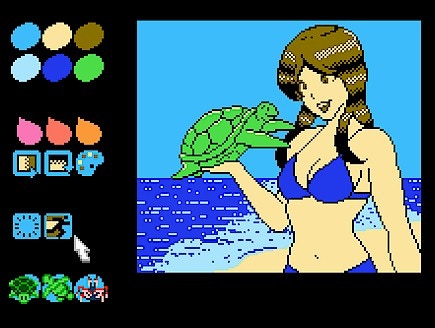 Typical in-game layout. Menu buttons to the left, artwork to be colored on the right.

The player simply colors one of twenty possible pages of artwork any way they wish. In addition to coloring, there is a color cycling feature called Colormotion. This brings the colors to life, such as making it appear the waves are moving behind the beach beauty! The player also can place stickers anywhere on the artwork featuring characters from the Turtle Rescue family of games. For extra creativity, some pages allow you to modify the artwork itself by painting with preset tiles. For example, you can place spaceships around the planet Earth.

When Turtle Paint was submitted to the 2020 Byte-Off competition, more than one person commented that it was even better than a certain dinosaur coloring game. I honestly did not know of that title when I created Turtle Paint. I researched it and learned that Virgin Games did indeed publish an official coloring program for the NES in 1993. Sadly, Virgin's game was poorly received. Not because of bad coding, but rather, it was a very limited program.

Turtle Paint has achieved its goal in being the most fun coloring program it can be, and some of the limitations of its predecessor were overcome. Below are the number comparisons to the aforementioned official coloring program. 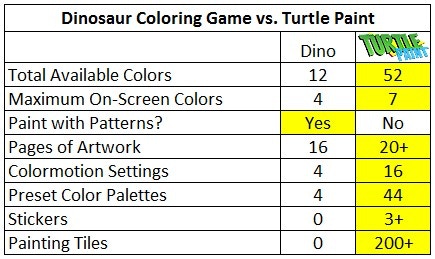 Why the pluses in the chart? Maybe there is more to discover...

But that is only part of the story. In creating content, a conscious decision was made to have a variety of artwork styles. Some pages are normal coloring book fare, while others are abstract and up to the user to decide how to approach. This helps to create an enduring and appealing art program.