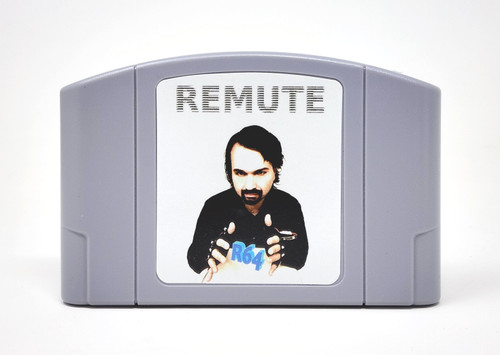 After releasing highly acclaimed cartridge music albums for the Sega Genesis, SNES, PC Engine and Gameboy, the german musician Remute is now once again coming up with a true novelty:
R64 is the first ever music album released as a Nintendo 64 cartridge!
It is Remute's most diverse and playful album so far and contains 15 brandnew songs ranging from ultra-catchy electro pop reminiscent of Yello, Kraftwerk or Yellow Magic Orchestra to sinister techno and house excursions beaming you right back to foggy 90s warehouse raves.
A worthy step forward into the shiny 64-bit world!

No tricks - this is not an embedded MP3-player, terribly compressed WAV-files on a microSD-card or other cheating: as with all previous Remute cartridge albums the sound on this cartridge gets generated and played back in realtime and it's all happening within meager 8 Megabytes of ROM! With R64 the Nintendo 64 console is your very own synthesizer and happy to serve you every time you turn it on and press play! 93,75 MHz, baby!
For this wizardry Remute cooperated with genius Nintendo 64 dev Rasky, who is not only responsible for the sound engine and player-GUI, but also managed to put together an amazingly trippy 3D-experience accompanying Remute's music.

The cartridges are region free and will fit and play flawlessly on all models of the Nintendo 64 console - no matter if NTSC-U, PAL or NTSC-J.
Just turn ON/OFF your console, R64 will auto-detect the region and you're ready to go!