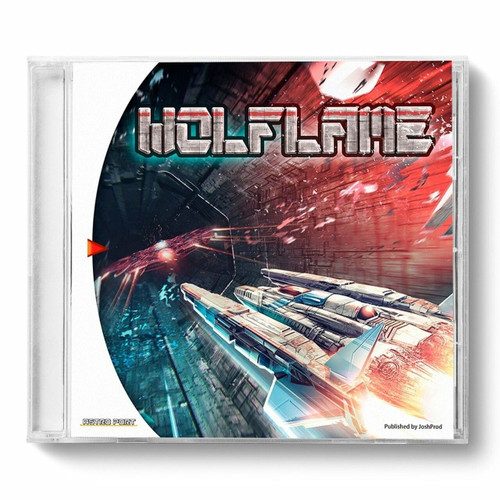 In the year 2005 AD, the Terran colony on planet Sig Fildonia was attacked by an alien race known as the Adorians. The offensive was swift and effective. Within days, the Adorians had destroyed the TDF fleet stationed in orbit, and commandeered the colony facilities, rapidly transforming the planet surface into a sprawling military base. With support ships sent from Earth unable to penetrate the Andorian blockade, the sparse TDF forces that remain on-planet must rally to counter the enemy invasion. They name their desperate resistance “Operation WOLFLAME”.
10 stages of vertical shooting action! Signature ASTRO PORT giant bosses to take down! 4 difficulty levels from Easy to Insane! Forward shot, plasma bombs, triple threat attack satellites! Supports HDMI & VGA Cables REGION FREE

PLEASE NOTE: This is a produced on MIL-CD media (like all professional Dreamcast indie games) and might not be compatible with some Dreamcast consoles built after November 2000. Please check the manufacture date on the label on the bottom of your console before purchasing.