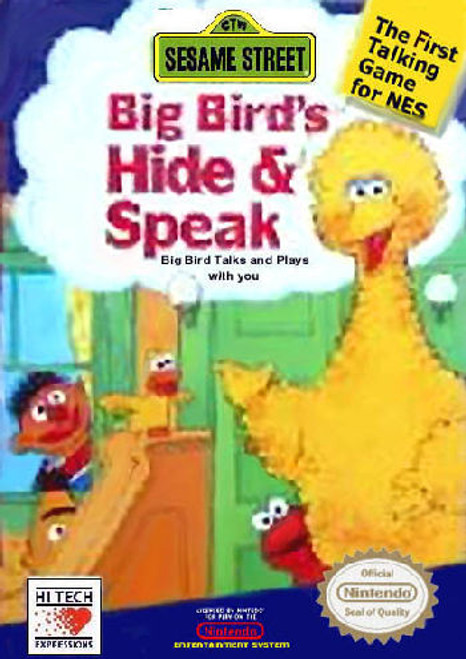 Sesame Street: Big Bird's Hide and Speak is a game for the Nintendo Entertainment System. It was one of the simplest-to-play NES games ever released commercially. This game stars Big Bird and co-stars Little Bird, and features Bert, Ernie, The Count, Grover, and Elmo. This game was developed by RSP Inc. and published by Hi Tech Expressions. All 4 sides of the D-pad move little bird to the next window clockwise; A and B Buttons both choose a window. The center buttons (Start and Select) exit to the game select screen. The game's objective was to choose the correct character or letter, with six different levels. The first two levels are based on simply choosing the window instructed by Big Bird, while the next two needed memorizing since the windows close. In the fifth level the player had to spell the three-letter word instructed by choosing the right letters and the last level the player must attempt to spell the most number of different words before a time limit, the letters in the windows changing after a new word is created.

*USED* Sesame Street A B C