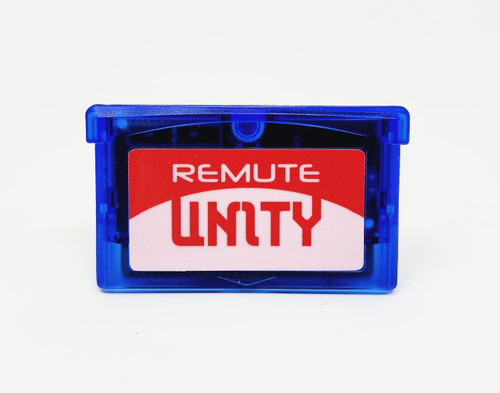 Right after R64, the first Nintendo 64 cartridge music album ever made, Remute is back with his next album:
Unity comes as a Gameboy Advance cartridge and features 15 brandnew songs about unification, division and trust.
Remute surprises with slightly odd yet always highly (techn)optimistic songwriting adventures here, but never negates his deep roots in ecstatic techno, electro and house music of the 90s. Being a self-proclaimed 'born geek' there are a lot of erratic visions and theories Remute has in mind nowadays. You are invited to get your minds twisted and your bodies too. Just have your handhelds ready!

"If your inner world is disrupted and confused, don't lose hope:
There's another place where all the dots get connected and Unity prevails.
Slide and glide into the incomputable beauty of the multiverses.
Let's integrate and then disperse!" - Remute

It's gonna be a hot, philosophical summer and we'll all get united.
Pop this 32 MB cart into your GBA, GBA SP, Gameboy Micro, Nintendo DS (lite) or Analogue Pocket and then turn on, tune in, drop out!
No region locks or incompabitilities. It just runs.
As with all Remute cartridge albums the entire music on Unity gets generated in realtime, so no ugly compressed WAV files or other cheap tricks here!
Besides a flawless audio-engine, which was achieved by the demoscene and GBA coder HorstBaerbel, Unity also features a neat GUI and even a fully fledged 3D animated video-clip made by the artist and gamedev Blue G!

Music programmed by Remute.
Code by HorstBaerbel.
Graphics and video by Blue G.
Trust in Remute.
×
Out of Stock