Vampires have taken on many forms over the years. There's your traditional Castlevania types, your sparkly Twilight types, and even your Sesame Street Count types. In June 1994, Bullet Proof Software thought Super NES owners could use a new type of vampire: the adorable, tomato juice drinking, magic trick enthusiast type. In a market already flooded with mascot characters with names like Bubsy the Bobcat, Awesome Possum, and Aero the Acrobat, the folks at BPS took a chance on Red Entertainment's little vampire prince named Spike McFang, and the SNES library is just a little more charming because of it. 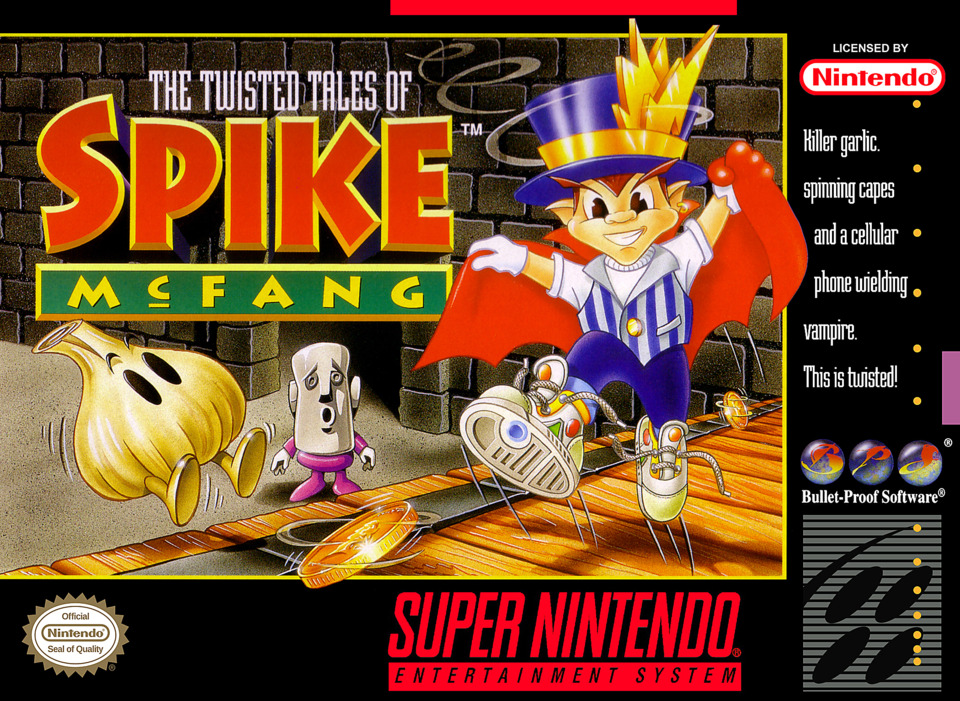 On the surface, the Twisted Tales of Spike McFang looks like a fairly forgettable title. Just look at that character on the box. He's wearing colorful sneakers, jeans paired with his traditional vampire cape, and has the ridiculous "attitude" filled smirk that was all too prevalent in the 90's. Fortunately for us all, once you actually play the game you'll find that the box art is quite misleading, especially in relation to the main character.

Not as Twisted as You'd Think

Spike isn't a dude with a 'tude. He's an adorable prince of a vampire kingdom where instead of drinking blood, vampires love tomatoes. He's also a big fan of magic, and as such wears a top hat and cape, which double as his primary weapons. Where the box art depicts Spike as something of a troublemaker, in reality (and I use that term loosely) he's a wide-eyed youth who just wants to make his father proud, and become a master magician. That might seem like a pretty common archetype, but after having the video game market flooded with attitude-filled mascot characters back in the 16-bit heyday, Spike's adorable good guy-ness turned out to be a nice breath of fresh air. 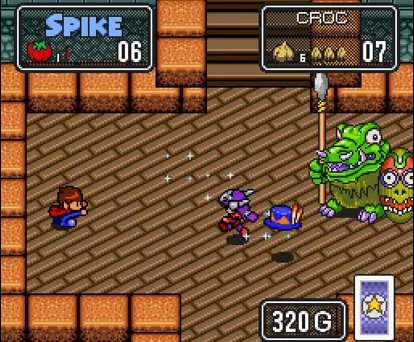 Then there's the world in which the game takes place. There's cards, spells, and garlic monsters everywhere (that’s right. The vampire fights adorable little garlic monsters), and after a few minutes in this charming world, it's nigh impossible not to fall in love.

Unbeknownst to many here in the US, this isn’t even the world’s first adventure starring this little guy and his tomato-loving kingdom. While this was the first and only game in the series to hit the US, this is actually a follow up to a PC Engine game called Makai Prince Dorabocchan. That game was a cool little platformer that again put you in control of Spike as you fought garlic monsters, did cool magic tricks with your hat, all set to catchy music and some pretty nice looking graphics. 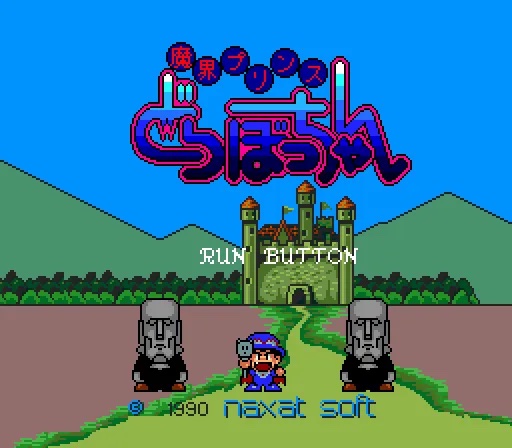 Spike McFang though plays more like a Zelda-style game. It’s got the whole top-down perspective thing going on, some light exploratory elements, and even some RPG leveling mechanics. Your cape acts as your primary weapon. Spike spins around and somehow the spinning cape does damage. It’s a great attack because it acts a lot like Link’s sword in A Link to the Past. The attack is effective on an arc instead of something with a straight ahead stab. It only works at a short distance though, and it also has a penalty for being used too much. If you spin around too many times in a row without stopping, Spike will spin out of control creating a much larger attack all around him that will push back nearby enemies but also leave him dizzy for a few seconds.

Your hat works as your ranged weapon. You hold the button to make it levitate over your head, and let go to throw. This becomes a very useful attack the more you level it up. Eventually it will travel further, curve, and more. Finally, cards work as your magic items. It’s a fun battle system that matches the overall polish of the game’s presentation.

You won’t be traveling alone either. You do occasionally meet other NPCs who will decide to join you on your adventure, and they actually help you fight monsters when they’re around. It would have been cool if there was an option to have a second player control them like in Secret of Mana, but it’s still a nice addition that adds to the adventure. And what an adventure it is. The story isn’t exactly the most complicated thing out there, but it’s really quite charming and just brimming with personality. There are these weird stone-headed dudes all over the place, wacky enemy designs, fun locales, it’s really got it all.

Just like its PC Engine predecessor, the music is great, the graphics are vibrant and colorful, the controls feel tight, it's the picture of what a Super NES game should be. Sadly, I think that might have also been one of the game's biggest problems. There was no shortage of quality titles on the SNES around Spike McFang’s release, and as a result, a lot of greats simply fell through the cracks. In the months surrounding its US release, the SNES also saw the likes of Super Metroid, Super Street Fighter II, Breath of Fire, Illusion of Gaia, Mortal Kombat II, Super Punch-Out!!, and Earthworm Jim, with juggernauts Final Fantasy III and Donkey Kong Country right around the corner that same year. Poor Spike never stood a chance against all that, which is unfortunate, but the bright side is that hidden gems like this help give console libraries their charm. 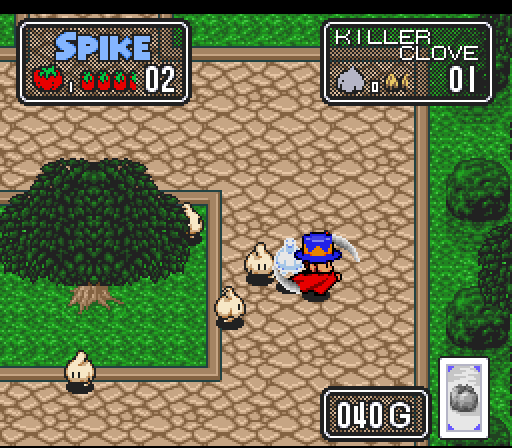 If there is one other major flaw with this game, that would have to be its length. As fun as it can be, there just isn't enough of it. If you decide to grind, you'll hit the level cap very early. Just when the story gets going, it all comes to an end before the world really cracks open. Short and sweet usually isn't really a problem, but in this game, it’s hard not to want more. But don't let that deter you! Even though it's a little stunted, what's there is some truly high-quality SNES gaming.

The Twisted Tales of Spike McFang is just about the perfect picture of a game that's lost in time. A sequel to a Japan-only platformer, a developer that's changed ownership a half dozen times, nebulous rights issues, and little to no fans clamoring for a sequel. It's a perfect storm. As you can probably imagine, it’s never been ported to any modern download services or collected in any compilations, and the same goes for its prequel. It’s also become prohibitively expensive on the aftermarket. Good thing alternate methods of playing games exist, eh?

If you're looking for something charming, fun, and slightly off the beaten path, give this twisted tale a try. Especially if you like beating up garlic.