As a kid getting in on the ground floor of being a Nintendo fan, it was pretty clear up front who the stars were. The Mario characters were the kings of the hill, and then you had Donkey Kong, Link from Legend of Zelda, Samus from Metroid, and of course, Pit from Kid Icarus. From the get go, these were the characters to know, and the games to play. I mean, just look at this. 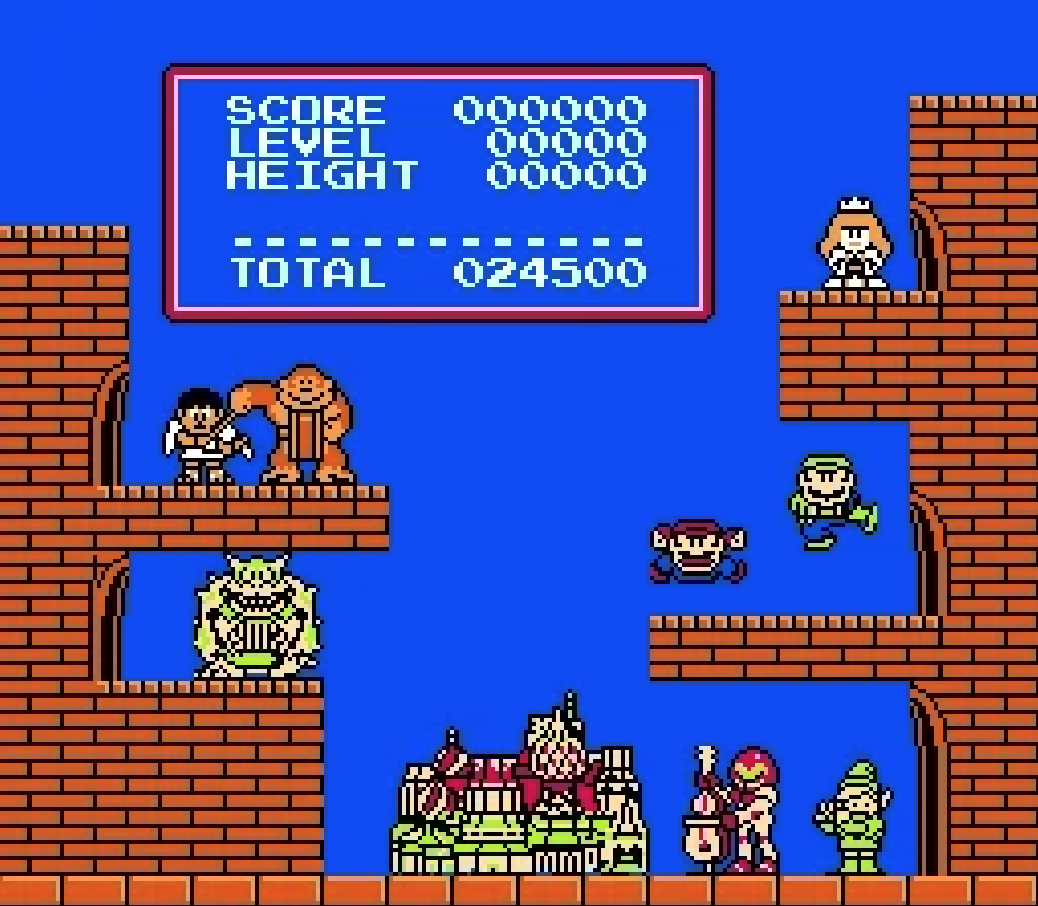 There he is playing a violin next to Donkey Kong in Tetris. 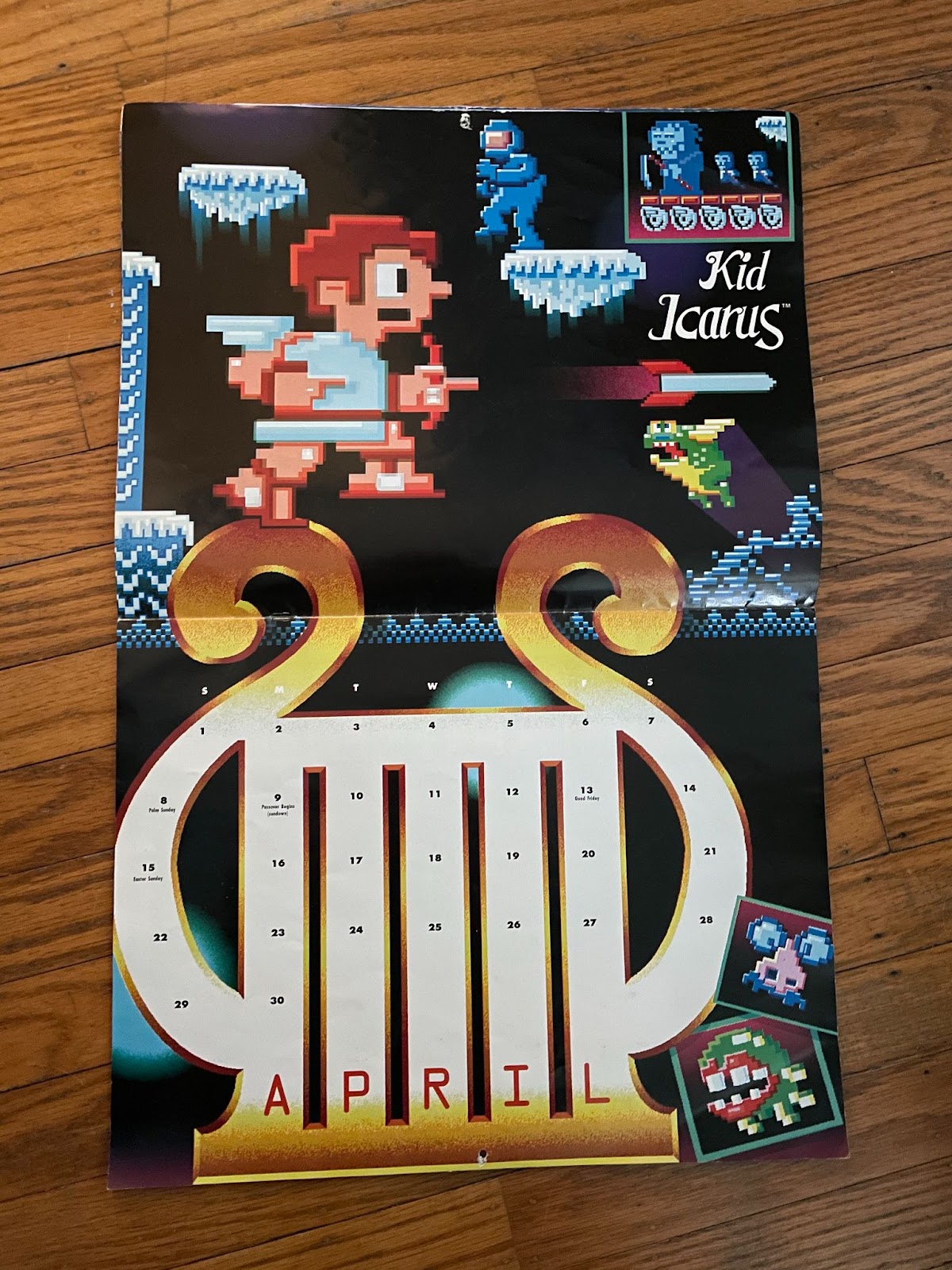 Here is April from the 1990 Nintendo Power Game Calendar. 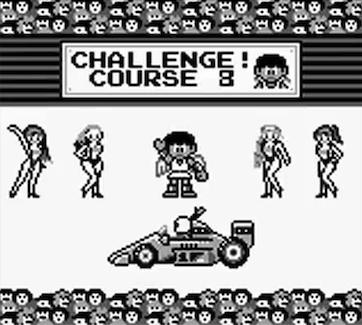 There he is congratulating winners in F-1 Race for Game Boy. 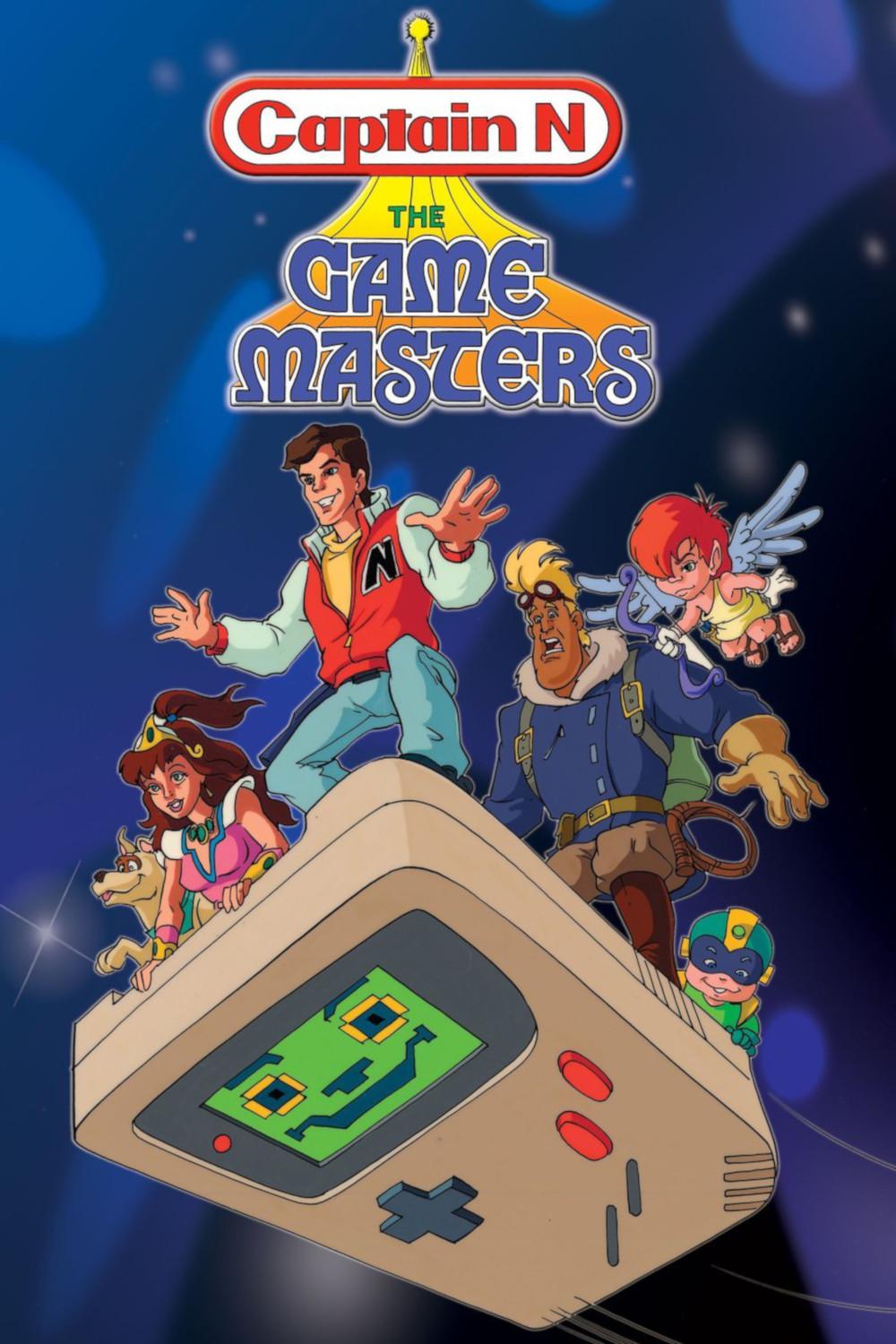 And let’s not forget, he was one of the main characters in both the Captain N animated series and comic books.

Pit was one of Nintendo’s star players, and his games followed a similar trajectory as Metroid, which back then could very much be considered its sister series. The two games were developed together, with some development actually crossing over, so much so that Metroids appeared in Kid Icarus as Komaytos.

Also similar to Metroid, the original NES Kid Icarus is pretty rough around the edges. It was massively influential and downright revolutionary at the time of its release (a bit less so in Kid Icarus’s case than Metroid) and both games earned their place as classics in the Nintendo pantheon. Both games also never received sequels on the NES. That honor fell to the Game Boy, and similar to Metroid II: Return of Samus, Kid Icarus: Of Myths and Monsters took the basics set up by the original game and expanded on them intelligently, while greatly enriching the franchise’s lore.

In the original Kid Icarus, one of its early defining features was the way you navigate most of the game’s levels. The first few stages are purely vertical affairs, and just to make things even harder, they’re ratchet scrolling vertical stages. Ratchet scrolling means that once you progress forward, you can’t go back. Now, in a game like Super Mario Bros., this presents a certain degree of challenge, but it isn’t too bad because it’s just an inability to go left. In Kid Icarus, this means that if you try to jump to a platform above you and miss, it’s insta-death.

In addition to that, Kid Icarus also was one of those games where if you walk off one side of the screen, you appeared on the other. Think the arcade Mario Bros. game, or Ice Climber.

With these two mechanics in place, the first couple of levels in Kid Icarus were easily some of the hardest in the whole game. Later stages would become dungeon crawlers, side scrollers, and even scrolling shooters, but those first few vertical stages were brutal, and turned a lot of players off.

So for Kid Icarus 2 (which is what I'll be calling it going forward because I don’t feel like typing Of Myths and Monsters over and over) they gave the game a much more natural difficulty curve. Gone is the ratchet scrolling, and in its place is the ability to fall all the way back down to the beginning of the level if you so choose. This didn’t just make not falling to your death all but disappear, but it allowed you to explore things you may have missed too.

What’s a bit stranger and not immediately obvious is how they handled the edges of the screen. Technically, the levels still work the same way, but it takes a minute to notice because they’re presented as a continuous scroll. You can keep moving to the right or left and the screen will keep moving with you, but instead of reaching the edge, the background will just repeat itself like a Hanna Barbera cartoon.

This isn’t just an infinitely looping world though, it’s almost as if the game is presenting itself inside a round structure. Enemies and powerups are persistent, so you aren’t just going to an infinitely repeating area that just looks the same, you’re actually moving in a circle. It takes a minute to get used to, but it works rather well.

Similarly to how they handled Samus in Metroid II, Pit’s new sprite is larger and more detailed. His sprite in Kid Icarus 2 is actually really great. He’s got a very cool look to him that matches the personality in all the key art quite well. This does mean that there’s less actual screen real estate to play in at any given time, but unlike in Metroid II, it doesn't hurt Kid Icarus 2, and in fact it kind of makes things better. 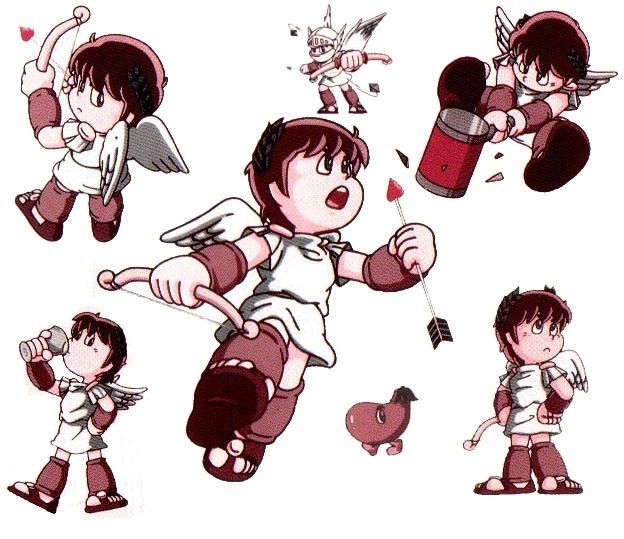 Where its most noticeable is in the labyrinth stages. In the NES game, these levels were all presented as single screen areas, similar to how dungeons worked in The Legend of Zelda. In the Game Boy game, the screen scrolls to keep the scale the same, but the visuals zoomed in so they’re easier to see on the tiny Game Boy screen. It works out quite nicely because it makes everything seem so much bigger.

Then you have the story. Back in the beginning of all these franchises, there was no such thing as a recurring villain because there weren’t enough entries to really give us stalwarts outside of Castlevania always having you fight Dracula and Mega Man always pitting you against Dr. Wily. Mario fought Bowser, then Wart, then Tatanga. Link fought Ganon and then prevented his resurrection. Samus fought Mother Brain and the Space Pirates and then faced off against the Metroid species and their queen on SR388. Pit fought Medusa in the first game, and Kid Icarus 2 introduces an all new villain in the form of the monstrous Orcos.

All new bosses and enemies littered the stages (with a few returning classics like the Eggplant Wizards) but there was nary a mention of Medusa and her underworld army. It was a whole new world, which was great.

Orcos was about as interesting a villain as you could possibly have in these kinds of games back then, and the final boss fight was a multi screen giant affair, which was honestly really impressive back in its day. 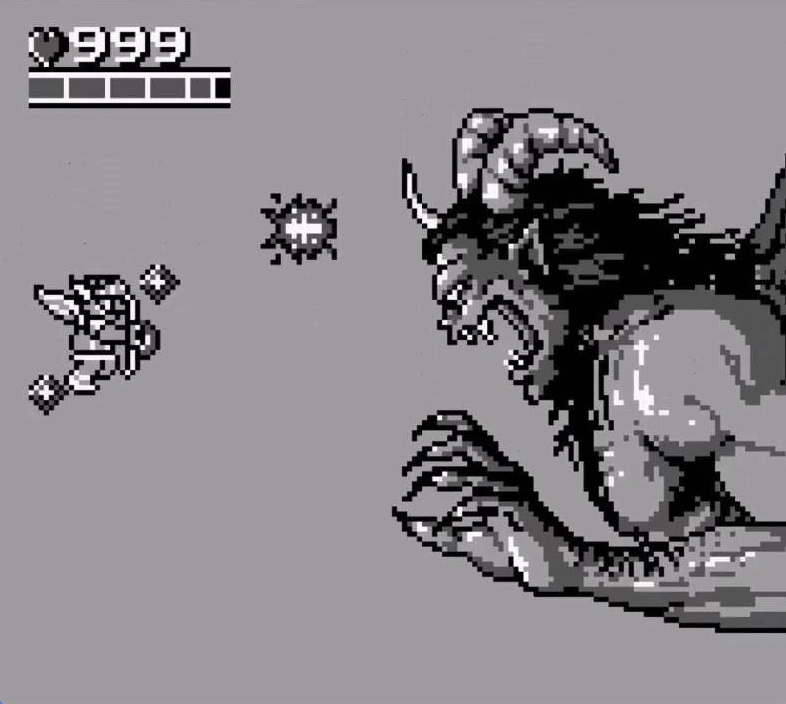 Unfortunately, there wasn’t much of a lasting legacy with this one because we didn’t get a proper Kid Icarus sequel until 2012, which was a killer wait for fans of the property. When all the greats were getting their 16 bit masterpieces like Donkey Kong Country, Super Mario World, A Link to the Past, Super Metroid, Super Castlevania IV, and Mega Man X, Pit was stuck in limbo, the only character presented as one of Nintendo’s major stars to be completely left behind for future generations. Even as Metroid disappeared for the entire 32/64 bit generation, Samus at least appeared in the original Super Smash Bros., where Pit didn’t make an appearance in the game until its third entry. The Ice Climbers made into Smash before Pit. What’s that about?

But when Kid Icarus Uprising eventually did release on 3DS, what a release it was. The game was spectacular, and took a very interesting approach to making Kid Icarus work in 3D, placing a major focus on the previous games’ flying segments. 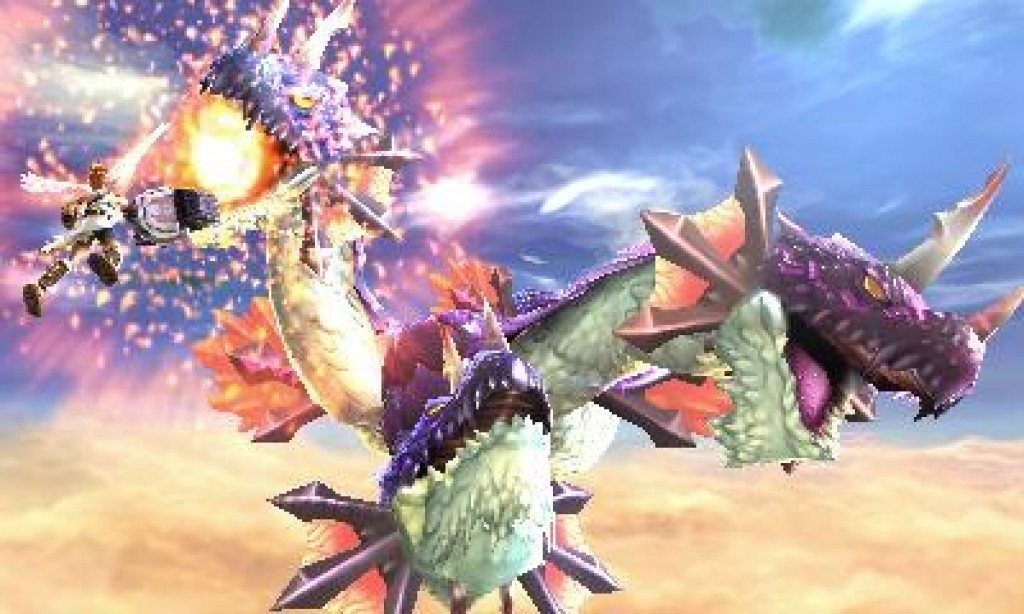 However, the events of Kid Icarus 2 were never mentioned in Uprising. It’s true that they weren’t really all that relevant, but even a passing mention of Orcos would have been neat, but the likely reason for this omission was the fact that this game was never released in Japan during the life cycle of the Game Boy. The first time Japanese players had a chance to play this wonderful game was on the 3DS Virtual Console. So considering Uprising was a Japanese game, it stands to reason Kid Icarus 2 was overlooked in its reference material because none of the developers had ever played the darn thing.

Which is a real shame. I have no idea why Nintendo chose to leave this game off its Japanese release schedule, but that decision likely is the reason we never got a continuation of the series for so darn long.

Pit deserved better, but at least his return came in grand form. Now let’s hope we don't have to wait another 20 years for a follow up.

Join us next time when we head to the wonderful world of sporting events and a pair of Game Boy sequels that did their best to make their NES counterparts work on the smaller screen.