The Art of Portable Sport

Sports games are an inevitability, and they have been since the advent of video games themselves. Just look at how many ads were centered around how Intellivision had more realistic sports sims than Atari back in the day. Even the earliest examples of video games themselves revolve around Tennis. That or space, but we aren’t talking galactic stuff today. Today is all about sports!

It’s not hard to argue that the sports genre hit a very specific stride during the NES era that hasn’t been replicated since. The 16-bit era had hits like NBA Jam that scratched the itch, and Nintendo 64 and PlayStation came close with stuff like NFL Blitz and so on, but there’s nothing quite like the simplicity of classic sports titles like Ice Hockey and Tecmo Bowl.

Konami got in on that game big time, and made possibly the finest examples of simple, accessible NES sports games ever conceived. With hits like Track & Field and even Jack Nicklaus Golf under their belts, it’s not hard to imagine how they managed to nail the sports of Basketball and Hockey as well as they did, but no NES library is complete without the likes of Double Dribble and Blades of Steel in them.

Sports fan or no, these two games were phenomenal examples of how to make a game centered around a complex real world sport, boil it down to its essence and make it fun for everyone. Both games have lived on as icons among Nintendo fans from that era, and both games got fascinating Game Boy sequels. 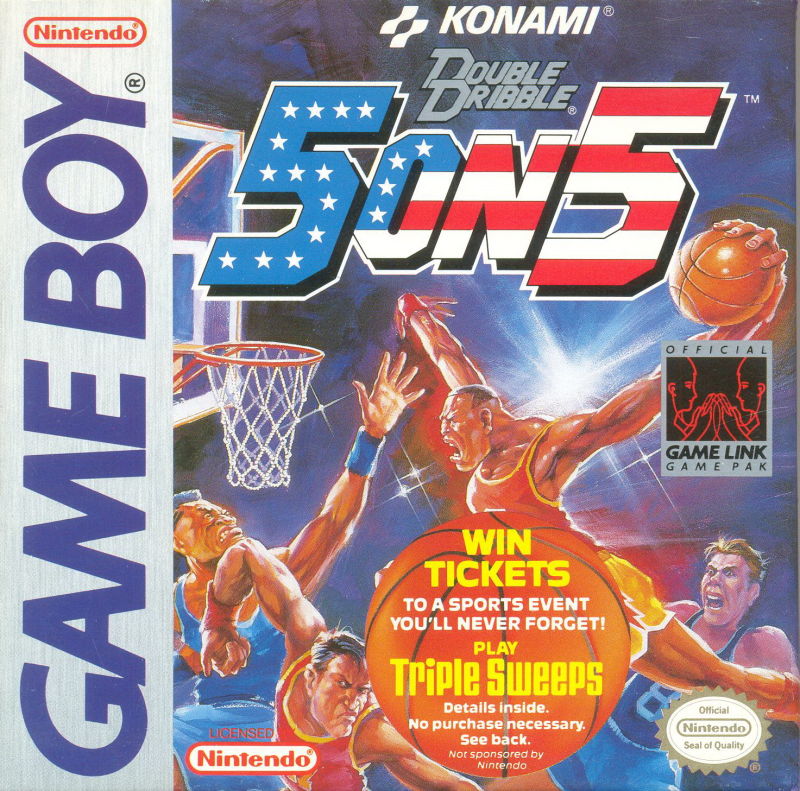 Let’s start with Double Dribble, since that one came first. With the success of the Game Boy platform, it’s no surprise that Konami wanted to get their sports brands on there ASAP, but with the Game Boy being what it was, any sort of port was going to have to involve limitations. Fortunately for us, Konami was pretty smart about things when it came to Double Dribble: 5 on 5.

Just like how they boiled the sport of Basketball down to its basics to make it fun to play on something as simple as an NES, Konami applied the same theory to creating a Game Boy port, focusing on what was necessary to make it work, and what wasn’t. The game runs at a slightly less smooth framerate, and everything is a bit slower overall, which makes sense because of the Game Boy’s screen. 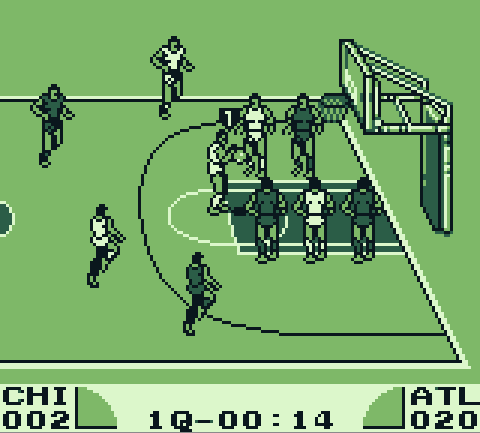 Those concessions aside though, 5 on 5 actually had a slight advantage over its NES counterpart because it came out about 4 years later. So with that extra time working wonders with the platform, Konami was able to add extra stuff like more teams, and even in-game music, a feature the NES game lacked. And of course, those super sweet slam dunk animations made the cut as well. 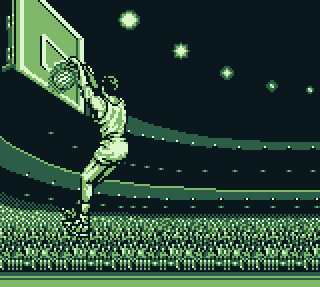 As for what Double Dribble: 5 on 5 did to change the course of the franchise, well… not that much. In fact, there wasn’t much in terms of Double Dribble releases after this one. So why bring it up here? Well, it stands as an excellent example of a developer taking the Game Boy’s limitations into consideration when porting and managing to pull off something incredibly impressive. The game is fun not just because it has the features of its console big brother, but because it feels good to play, and that’s not something a large number of other Game Sports games can boast. It really is an impressive little package, and speaking of which... 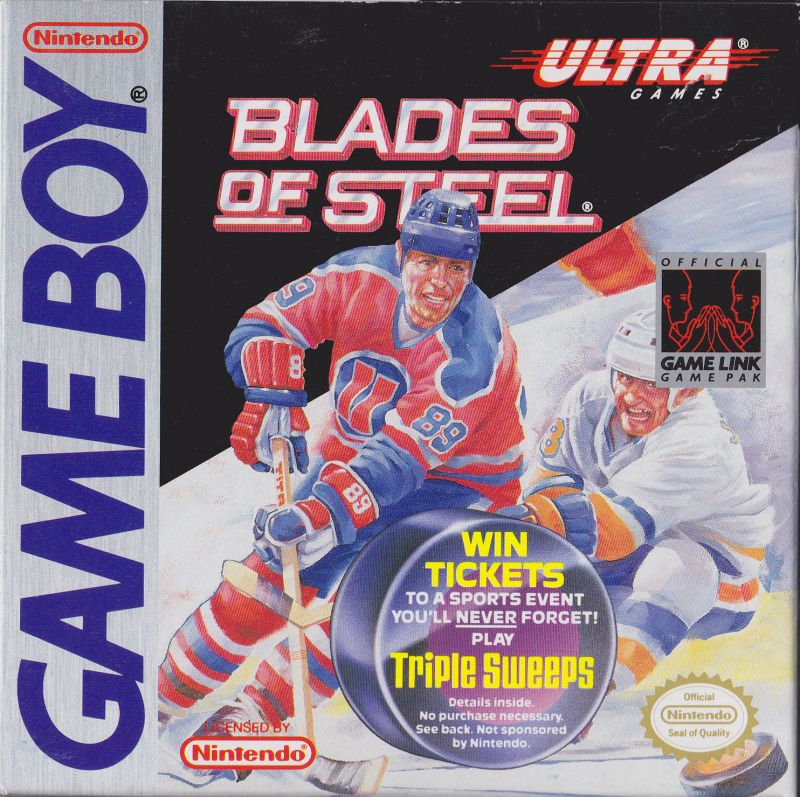 Blades of Steel for NES has perhaps an even bolder reputation than Double Dribble. It looks, sounds, and plays fantastic to this day, and is easily one of the best sports games made for the NES. So when it came time to port the game to Game Boy, they could have kept it simple. They didn’t need to go as hard as they did, but Game Boy fans were sure as heck glad that was the direction they took.

Unlike 5 on 5, Blades of Steel doesn’t have a different title, but even more so than Double Dribble, this feels like a sequel to the NES original. Like 5 on 5 there’s an in-game soundtrack and it absolutely rocks. Where the NES game let the sounds of hockey and the “Makes the pass!” announcer take the reigns in the sound department, the Game Boy game takes the sound design in a much more intense direction with this outstanding music. Just listen to this! 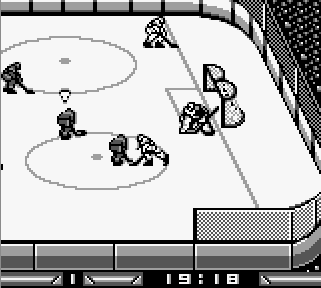 Another page it takes from the Double Dribble playbook is the introduction of super cool cutscenes whenever a team scores. The NES game simply had your team celebrate, but this game does the Double Dribble style slide show looking closeup look at the puck actually flying into the net, and it is remarkably cool to see.

Honestly, the only thing this game is missing is the Gradius mini game in between periods, but at the end of the day, that’s not the most tragic loss of all time. Sure, they were cool, but hockey is what we’re here for, and it’s as smooth and fun to play as it ever was.

Oh, and the fighting is here too, and in full giant character glory. It’s even got its own cutscene to kick the fights off too! 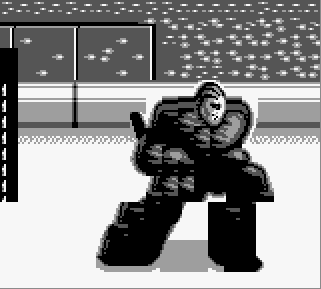 Sometimes just doing a good thing better is all you need. When it comes to old school sports games on the Game Boy, simplicity was key. That and link cable compatibility (which both of these games offered). And unlike a lot of modern sports games, these two are just as fun to play today as they were back when they first came around. That classic Konami music is nothing to turn your nose up at either.

Join us in a few weeks when we help celebrate gaming’s first ape’s 40th anniversary with one of the absolute finest Game Boy games ever created. See you then!