A Monkey in your Pocket

Some say it was Donkey Kong Country that signaled the end of the 16-bit console wars. The game was a massive success for Nintendo and helped move the needle to eventually sell more units than Sega.

Donkey Kong Country was a huge moment in gaming, and its success hinged in no small part on the game’s incredible graphics and sound. The visuals in Donkey Kong Country looked like they came from a much more powerful console than the SNES, and the sound seemed (at least at the time) like it was coming out of something powered by a CD-ROM drive. Of course, the fact that it was a recognizable brand like Donkey Kong on the box and the game was very fun and well-made didn’t hurt either. Donkey Kong Country was the total package. So naturally, sequels were the next step. 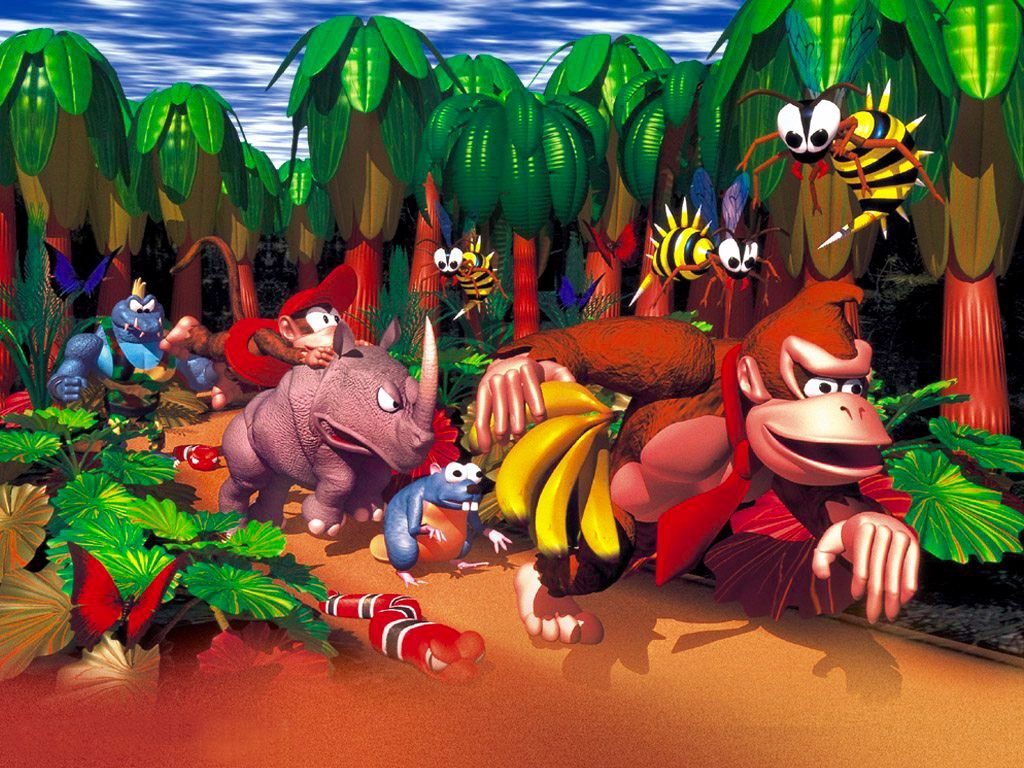 A proper sequel on the Super NES was the most likely scenario, but what about the Game Boy? There must be a way to capitalize on this hot new franchise on handheld, right? The trouble was, the Game Boy was extremely dated hardware, even by that point. It couldn’t display in color, so how could it possibly handle anything even remotely resembling what the Super NES was doing? The graphics and sound were kind of the point, after all.

Nintendo and Rare came up with a solution, and it was sort of brilliant. What if the massive technological downgrade was the actual plot of the game?

One of the more entertaining bits in Donkey Kong Country was Cranky Kong. The exact lineage there is a bit muddy, but no matter the specific relation between him and the other Kongs, Cranky is the original Donkey Kong from the 1981 arcade game. Why he has aged while Mario hasn’t is just one of the many mysteries surrounding the character, but whatever. It was a solid gag.

During Donkey Kong Country, Cranky would berate Donkey and Diddy about their game having all these fancy graphics while back in his day he had 3 frames of animation and he was happy to have that! The personality of this new Donkey Kong world had fourth wall breaking baked in from the start, which came in handy for the game’s first sequel, Donkey Kong Land for Game Boy. 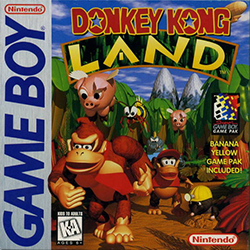 Following the similar Super Mario naming convention with Land seemingly notating that it was a portable adventure that was clearly going to be different, DKL’s instruction manual detailed one of the silliest and most brilliant game plots ever conceived.

Following their adventures in Donkey Kong Country, Cranky Kong begrudgingly admitted that the game was a bit more successful than he thought it would be. Then again, it was probably only successful because of the fancy graphics and sounds. Donkey and Diddy took issue with that, claiming that the game was a success because it was fun, so Cranky issued a challenge.

He would call King K Rool up on the phone (as you do) and tell him to steal Kong’s banana hoard again. This time he’d bring some new bad guys along, hide the bananas in new places across the island, and it would all be done on the hideously underpowered 8-bit black & white Game Boy.

Climbing in the Right Direction

Donkey and Diddy accepted the challenge, and thus a new Donkey Kong adventure began, and it wasn’t just a retread of Donkey Kong Country. Just like the story suggests, this takes place after Country, and it’s absolutely reflected in the game’s world. You start back in the jungle, but right by K Rool’s ship, which serves as the fourth stage in the game. This is where you start to see some of the small evolutions that would eventually be expanded upon in Donkey Kong Country 2: Diddy’s Kong Quest, like climbing ropes. It doesn’t work exactly the same way as in DKC2 since you can only hold onto one rope at a time, but you can easily transfer from one rope to the next similar to how it worked in Donkey Kong Jr. 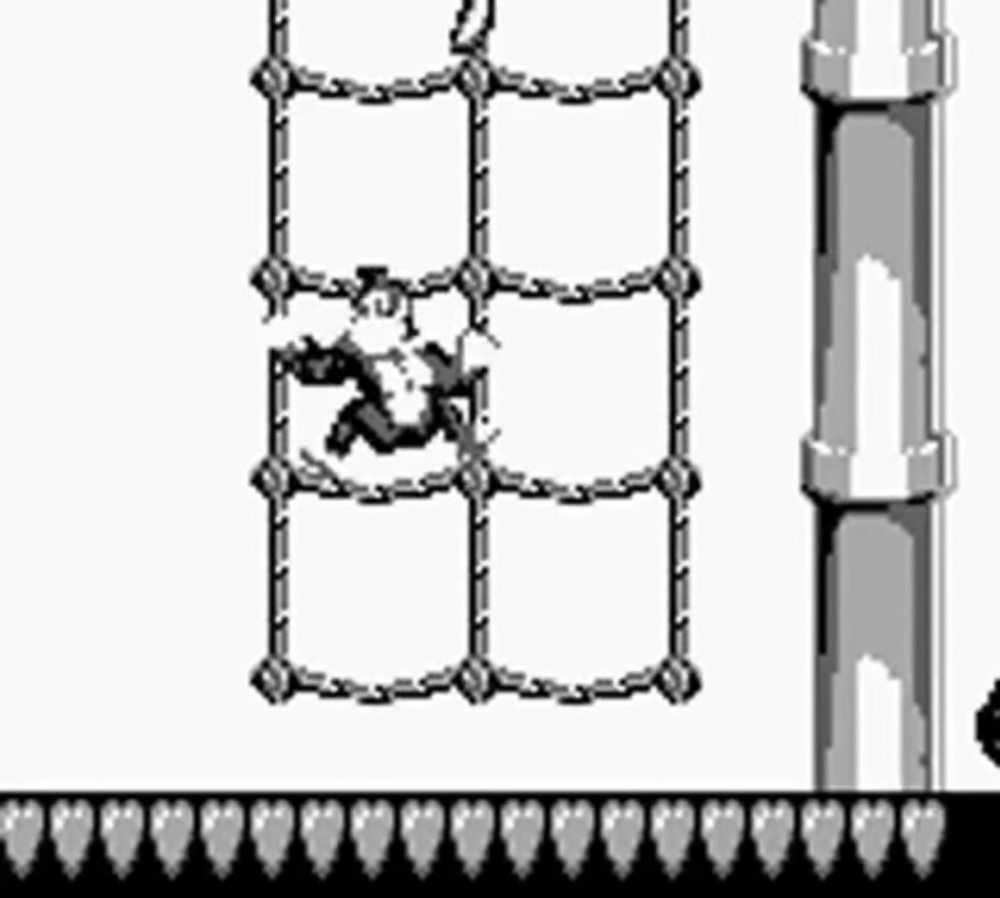 Naturally, a lot of sacrifices had to be made to make this game work on the Game Boy. The screen real estate is considerably smaller, so you can’t see ahead of yourself very well which can lead to a lot of cheap deaths. The graphics aren’t quite as hideous as you might expect, but this game isn’t exactly a looker. You can more or less tell what’s supposed to be what, but it isn’t super easy, especially if you were playing on the original model of the Game Boy.

The physics were pretty different too, meaning the characters don’t move nearly as smoothly as they did on SNES, and your secondary character doesn’t remain on the screen following you around like they did on SNES, instead flying straight into the sky when you crack open a DK barrel and appearing in a tornado when one gets hit.

The music took a hit too, but only in terms of instrumentation. The compositions themselves are actually fantastic, and very reminiscent of classic 8-bit Rare games like Wizards & Warriors and Battletoads.

Despite these issues, the game worked, and more than that, it was actually pretty fun. It takes some serious getting used to, but in a lot of ways it’s a better sequel to Donkey Kong Country than Diddy’s Kong Quest was. No, it isn't a better game than DKC2, not by a longshot, but you can actually play as Donkey Kong, which maintains a very important thing about the first game that was sorely missed in the 16-bit followup, the duo of a heavy and light character.

The new locations the game takes you to are great, including construction sites that connect the game to the original Donkey Kong arcade game. There are flying pigs too, and who doesn’t love flying pigs?

It was naturally a lot more fun to play on the Super Game Boy where things could be seen a lot better, but no matter where you’re playing, Donkey Kong Land was a real sequel. Sadly, its own sequels wouldn’t follow this same creative format with Donkey Kong Land 2 and 3 playing out more or less like rearranged ports of Country 2 and 3, but the first Land showed the kind of innovation that made the console sequels so special, and expanded on the basic gameplay mechanics of the first game in ways that would carry on through the sequels.

Join us next time when we look at a handheld sequel to a co-op NES classic that ditches the co-op, but still manages to live up to its namesake.