The EverDrive N8 Pro is HERE!

That’s right, you can now purchase the EverDrive N8 Pro from Stone Age Gamer, and we’ve done everything we can to make sure it’s the best flash cart the Nintendo Entertainment System has ever seen.

What’s the difference between the N8 and the N8 Pro?

On the surface, the changes may seem subtle, but the EverDrive N8 Pro is actually one heck of an improvement over the original model.

Here’s a quick look at a coupe of the bigger ones. 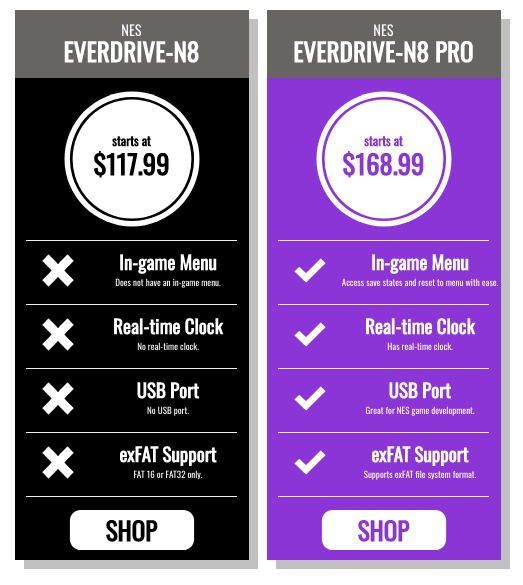 So what exactly does all this mean? Let’s break it down step by step, with a few other new features to boot.

This is possibly the change that will mean the most to a lot of players. When you load up a game on the original EverDrive N8, that’s the game you’re playing. If you get tired of blowing up underground mutants in Blaster Master and you want to switch over to a refreshing game of Ice Hockey, you would need to return to your EverDrive’s main menu. In order to do that, you’d have to reset your NES console, which means getting up off the couch and pressing the reset button.

True, if you’re going for the authentic retro experience, that’s technically a more accurate way to go about it. Changing games back in the old days did require you to get up and put a new cartridge in, but we aren’t living in the 90s anymore. Walking across the room to press the reset button is a thing of the past!

The new N8 Pro now offers an in-game menu. By pressing and holding the Start button and down on the D-pad, a mini menu screen can be accessed at any point in any game, allowing you to create a save state, load a save state, or even return to the main menu without having to get up and reset your console!

If you’re the type of person who likes to run through several NES games in one sitting, this is a real game changer… literally!

Speaking of save states, accessing them via an in-game menu isn’t the only change. The original N8 featured only one save state slot. The N8 Pro now offers a whopping 99 save state slots! Now you can save your progress at multiple points in multiple games.

These aren’t just great for finally reaching the ending of tough games like Ninja Gaiden either. Save States are excellent for perfecting strategies in games like Mike Tyson’s Punch-Out!!, so you can restart at any point in a fight as many times as you like, or even practicing speed running techniques without having to start from scratch every time. 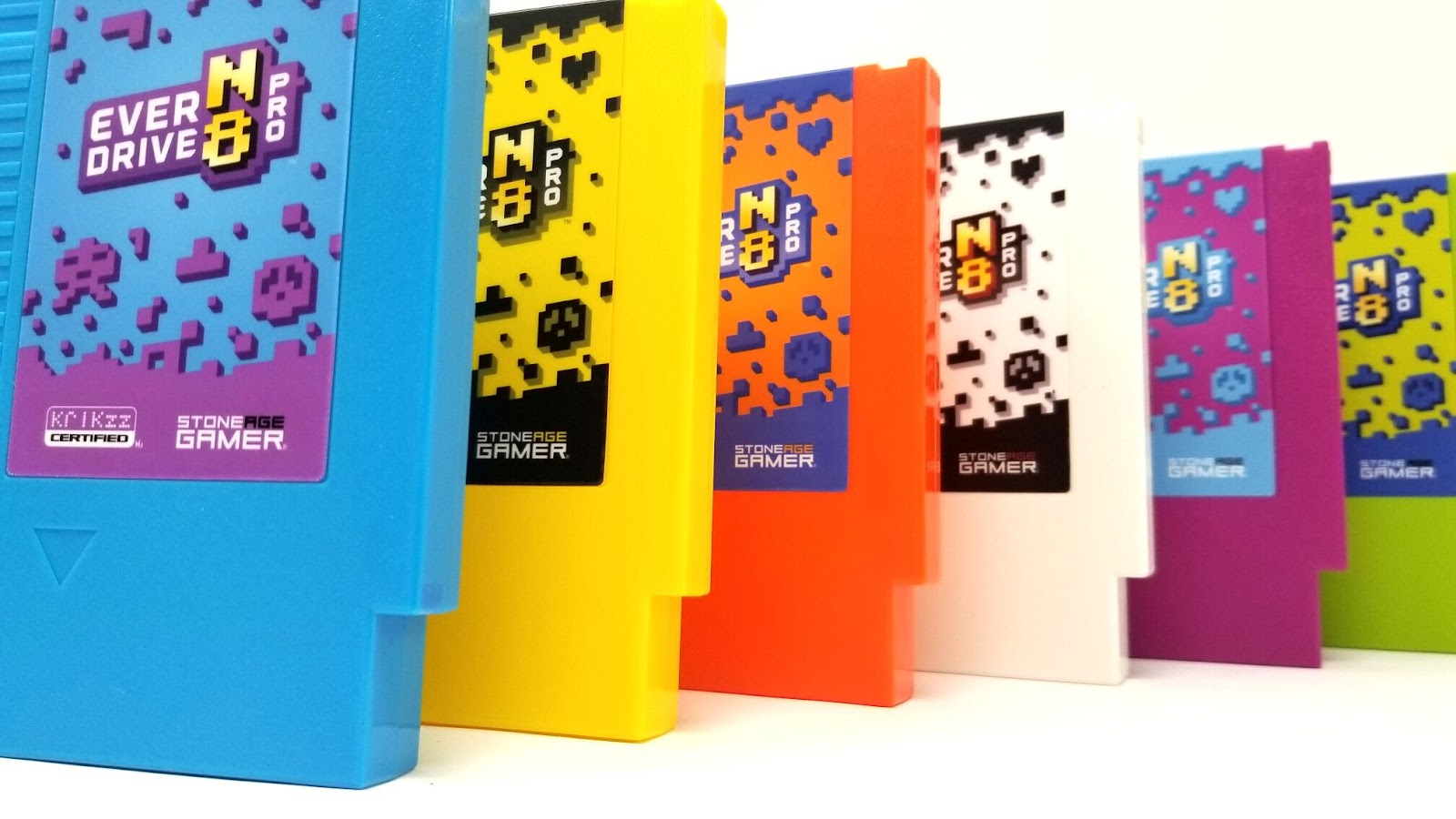 Want to know the date and time you added different ROMs to your EverDrive? Well, the EverDrive N8 Pro has a real-time clock built in, so you can keep track of when you did what. How convenient!

Speaking of your files, the EverDrive N8 Pro loads them up considerably faster than the original EverDrive N8. Granted, the N8 isn’t exactly slow, especially considering the average file size of an NES game, but still, jumping in and out of multiple games in a single session becomes much less tedious when things are moving more quickly.

While we’re still on the topic of files, the N8 Pro now supports much larger file sizes. This may not seem like much when you consider that the original N8 handled pretty much every officially licensed NES with no issues, but what’s so great about flash carts is that they can do more than just play the old classics you know and love.

With increased file size capabilities, you can use your EverDrive N8 Pro to play many more homebrews, mods, and fan translations on your original hardware than ever before. And don’t worry, folder sizes have been expanded too, so you can be extra organized.

Speaking of homebrews, the EverDrive N8 Pro features a USB port. So if you’re the type of person who likes to create your own mods, fan translations, or even original NES games, this could definitely make your life easier.

As great as all that stuff on the inside is, the first thing you’ll notice about the EverDrive N8 Pro is its new design. Much like the original EverDrive N8, we’re offering a multitude of color options for the Pro, featuring several different color variations of our new label design.

First, we have the Base Red series. These carts come in a translucent red cart and your choice of label variants. There’s the basic black if you just want to keep things simple, or if perhaps you want to go for a more “Legend of Zelda” vibe you can steer towards the gold variant.

Or maybe you want to stick with something a little more in line with your existing NES carts. If that’s the case, we have the Classic styles. These standard gray or solid black carts come with the basic black label or the full color red/blue option.

If you’re looking for something a bit more bold, have a look at the Black Series. These come in our solid black NES carts, but they feature some more individual color-centric designs, including gold and silver, which you can get a look at here.

Of course, the main event is the Premium Styles line. These carts come in a striking variety of colors, both solid and translucent. The label variants are all over the map too, with colors galore to match the carts themselves. There’s something for everybody!

You better believe there is! If you go to the EverDrive N8 page on our site, you’ll not just see more colors than we have pictured here, but a more detailed list of the Pro’s new features. And oh yeah, there’s a Famicom version too! 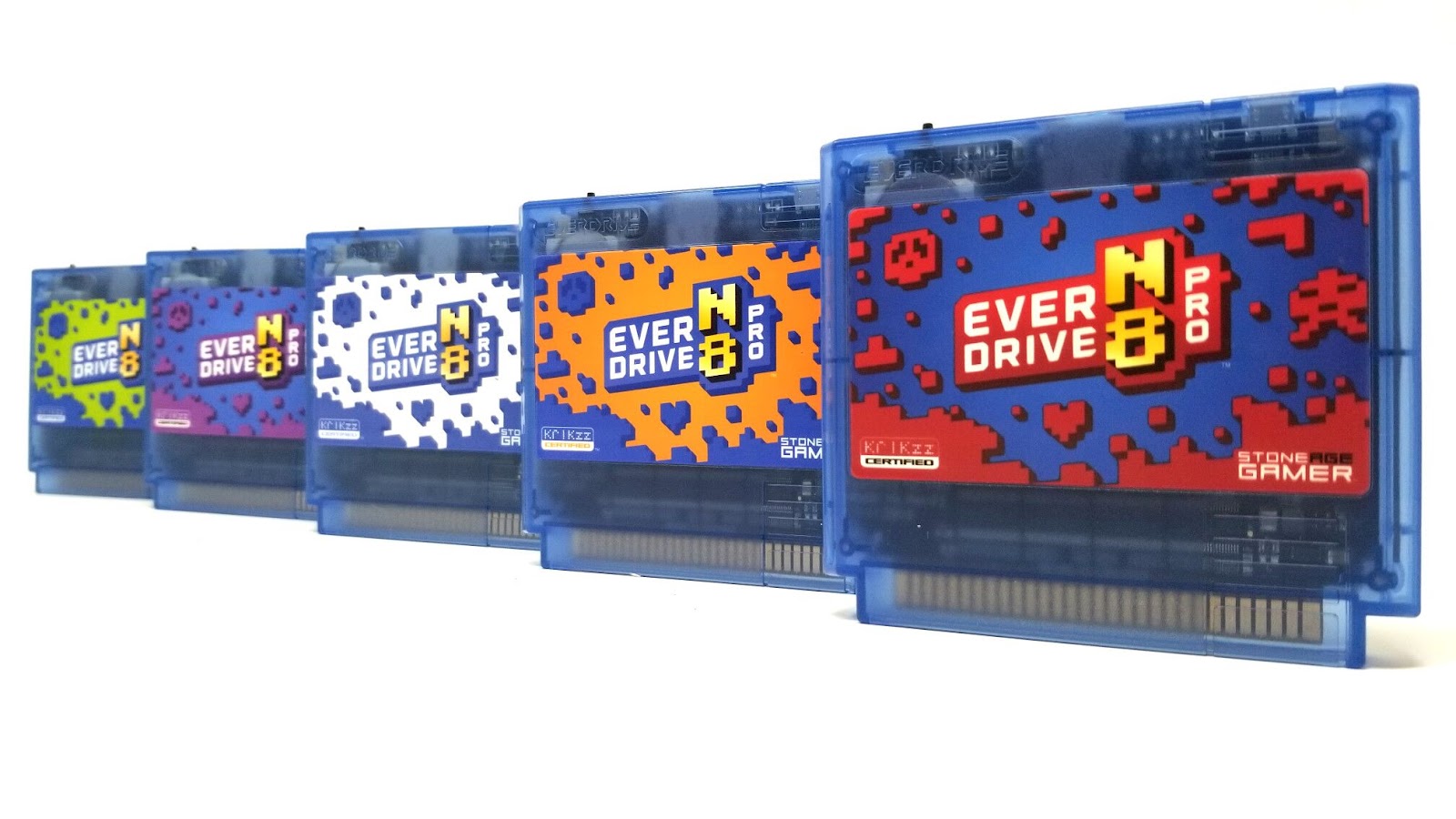 Of course, if you have any more questions about the EverDrive N8 Pro, or any of our products, don’t hesitate to reach out to us on any of our social media platforms, or shoot us an email at support@stoneagegamer.com

So what are you waiting for? Get yourself an EverDrive N8 Pro and share a picture so we know which one you went with!