I can’t believe it myself, but there’s a new Willow TV series out in the world! Like, a real live action show with a budget, Warwick Davis, the whole nine yards. I used to love Willow as a kid, so finally seeing an expansion of that world is pretty dang exciting. One thing I completely missed out on though was Willow video games.

There have been three video games based on the Willow license as far as I can tell, and I only knew about two of them before doing research for this article. I knew about the NES game from my time working in video game stores, and I found out about the arcade game when I dipped my toes in emulation a few years back, but the PC game was a complete mystery to me. (I’m better off, apparently). These games are all interesting for different reasons though, so let’s dive in for a closer look. 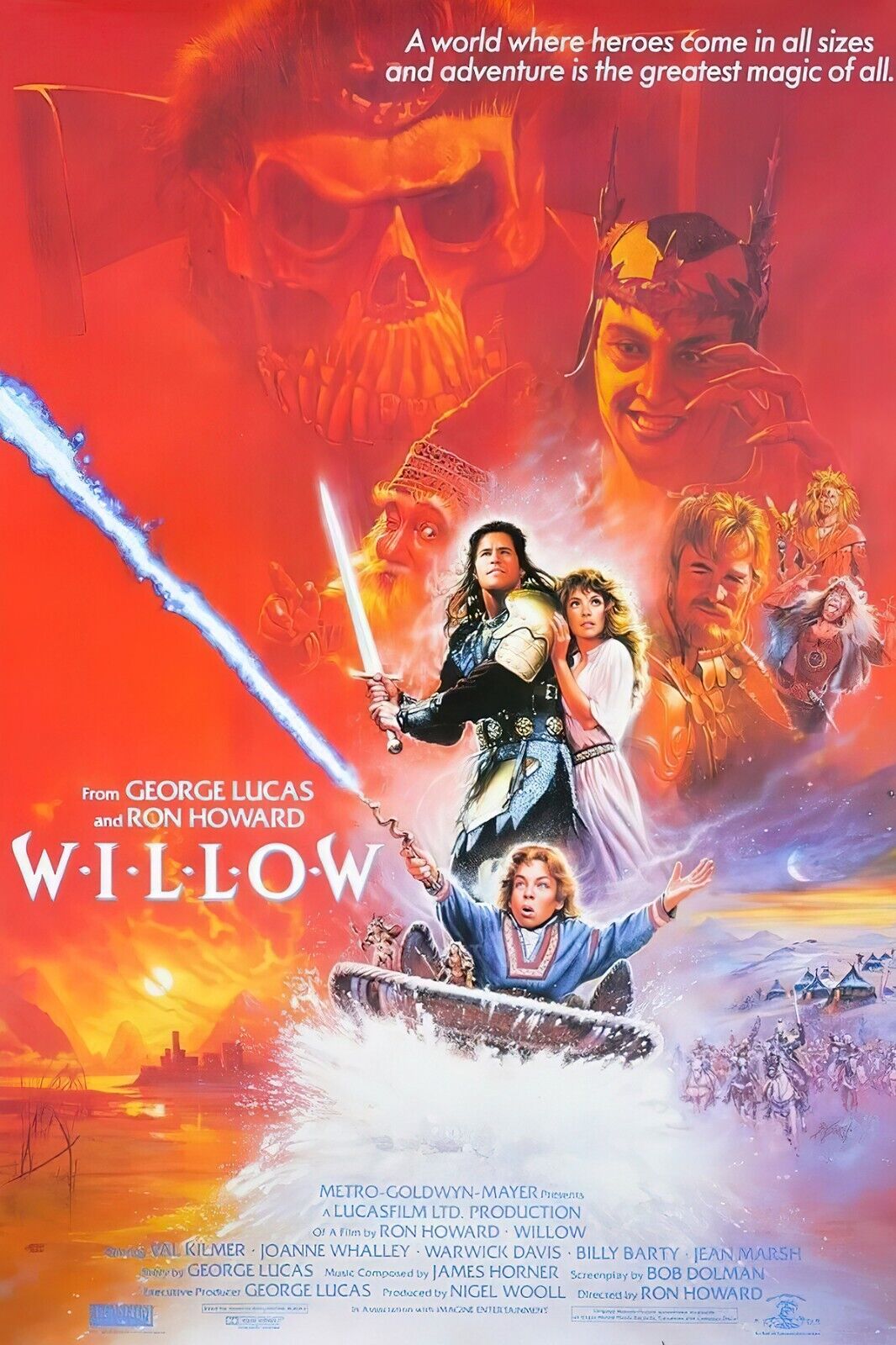 First, I guess I should explain what Willow is because I’ve come to learn that there are a fair few folks out in the world who aren’t familiar with the property much, if at all.

Lucasfilm is most widely known for Star Wars and Indiana Jones, but they did a couple other movies as well, including Willow. It’s a fantasy flick starring Warwick Davis as an aspiring sorcerer named Willow Ufgood. An evil sorceress named Queen Bavmorda tries to stop a prophecy from being fulfilled by a baby, but that baby winds up in Willow’s village, and adventure ensues. Along the way he meets some tiny people called Brownies, all sorts of monsters, and of course a lovable mercenary named Madmartigan played by Val Kilmer.

It’s a fairly by the numbers movie that was filled to the brim with the latest in visual effects technology. It was directed by Ron Howard, the story was by George Lucas, and while critics were pretty split on it at the time, kids in 1988 loved it. It was ultimately moderately successful, but not quite enough to be turned into a franchise. Still, it’s got its following of fans, and has definitely left its mark on pop culture.

The day this article posts, November 30, 2022, a sequel series also titled Willow is premiering on Disney+, marking the first time in a very long time that fans have had much of anything new in this franchise to sink their teeth into besides a couple of books (which I haven’t read, but I’d like to!) Back when the movie came out though, the powers that be knew they needed to go after the nerd crowd, and thus three video games were created based on the license. 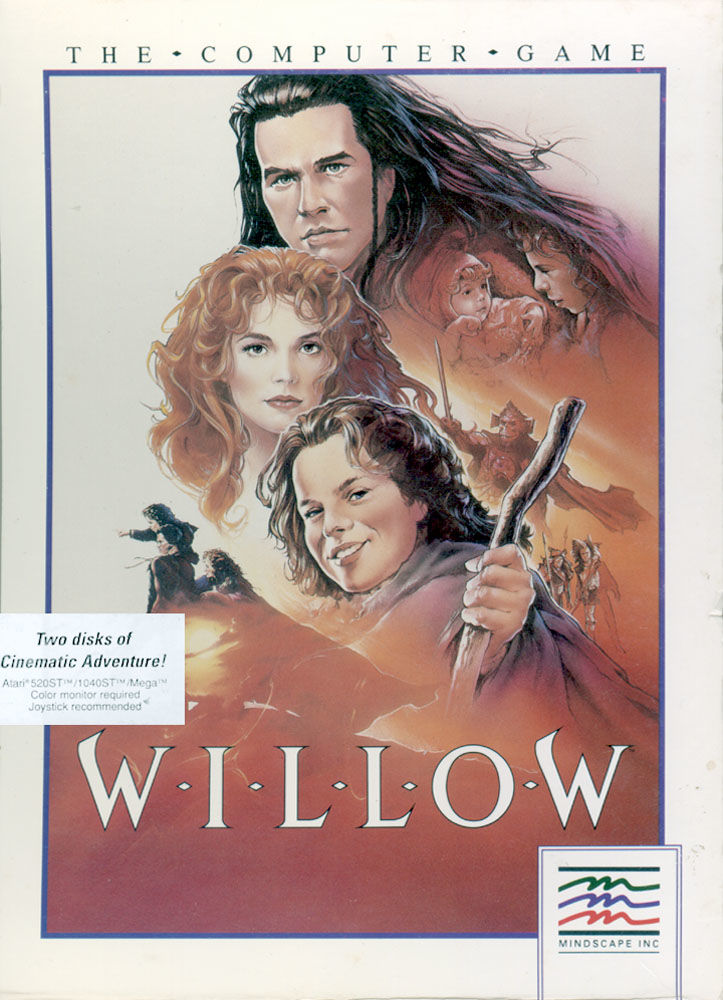 The first game to spring from the Willow well was 1988’s Willow for MS-DOS and Atari ST developed by Brian A. Rice, Inc. and published by Mindscape. This was the same year the movie was released in theaters, and it’s umm… not very good. It was also ported to the Amiga and Commodore 64 the following year, but those versions are equally bad, if not worse.

From what I can gather, the game plays like a long, semi-interactive scroll. There’s this giant piece of paper with the story written on it, and you can click on various words to “play” segments from the movie. There are some nice-looking digital stills from the film itself, but they’re followed by these nigh incomprehensible segments of “gameplay” that range from a first person dungeon crawl to sledding down a tunnel of ice. 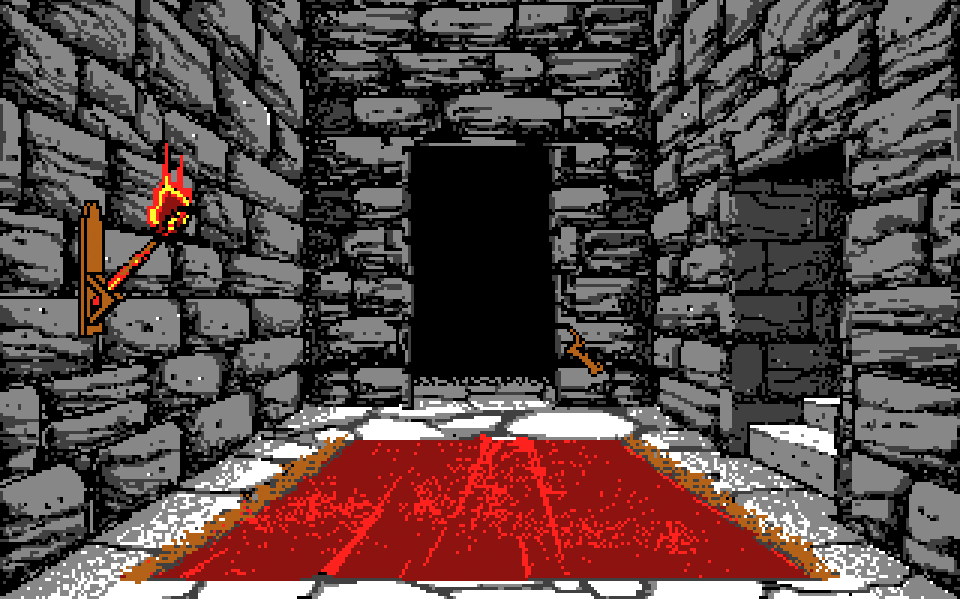 It’s all pretty neat-looking I guess, but one thing it doesn’t look like is “fun.” Reviews from the time seem to echo this sentiment. This excerpt from a Computer and Video Games review from March 1989 says:

“The programmers have tried to recreate the key scenes from the film with little success. There is such a dependence on luck on every part of the game (even the swordfight!) that it just isn't enjoyable to play.” 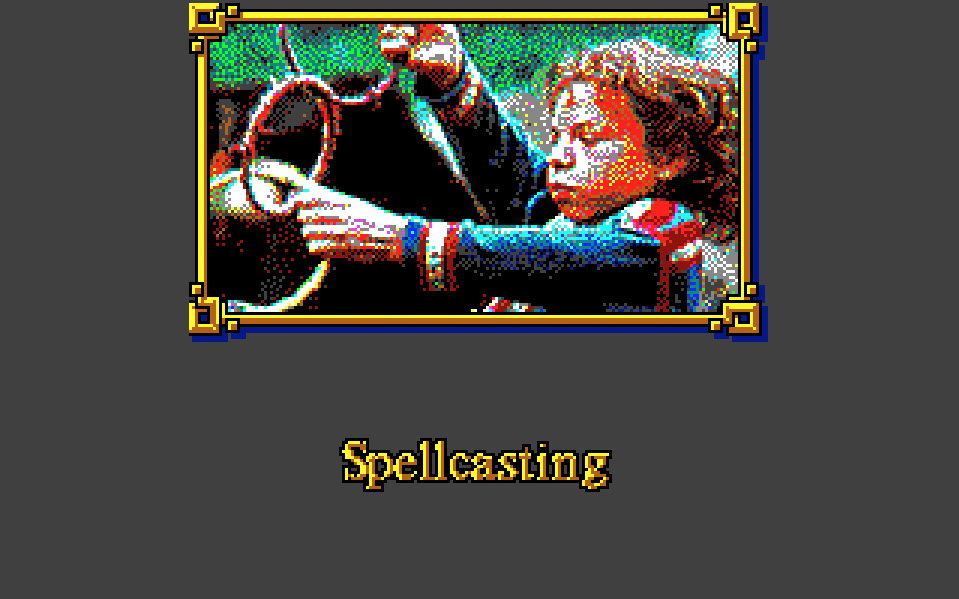 This is the only one of the three Willow games that I didn’t have direct access to play, but after watching some videos and reading a handful of reviews, I think I’m better off. 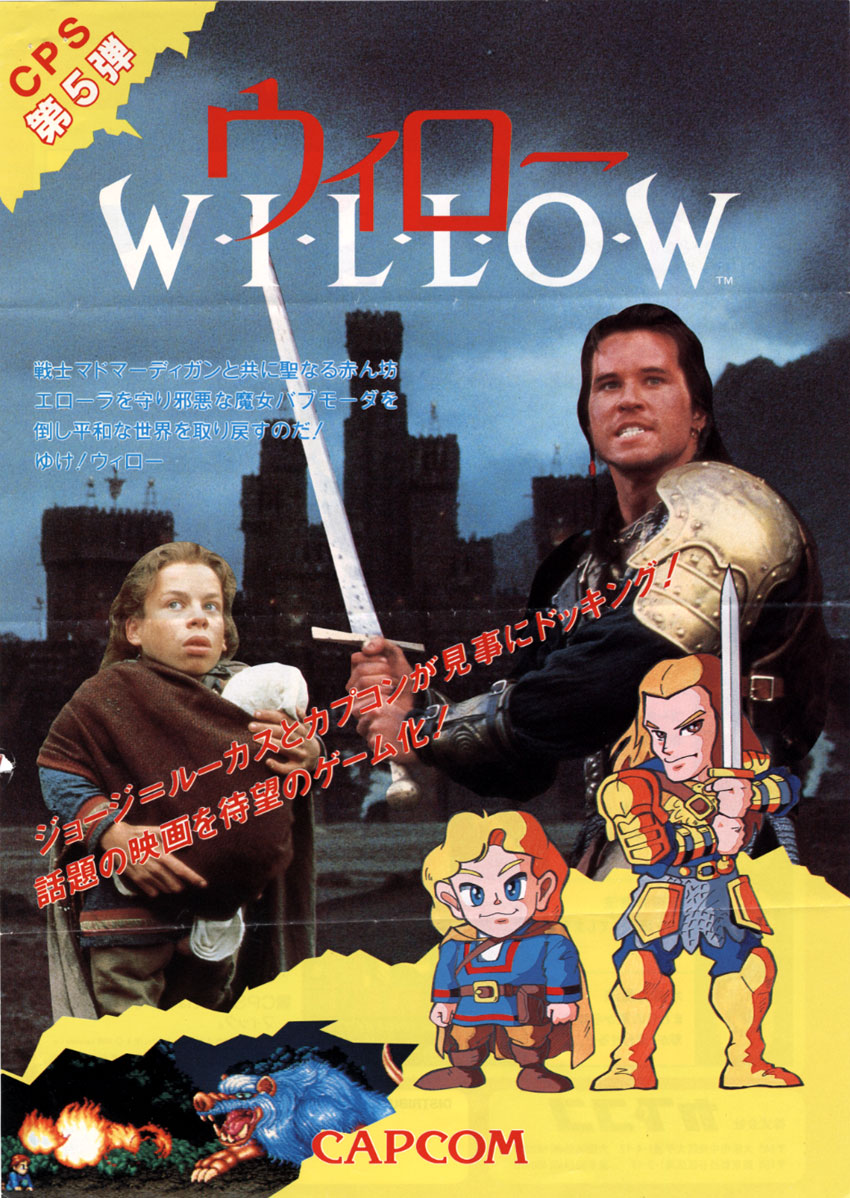 The second Willow game was an enormous step up in quality. Willow the arcade game was developed and published by Capcom, who didn’t exactly have a habit of making bad games back in those days. It showed up in 1989, and it’s kind of awesome. It’s a side-scrolling action game where you control Willow or Madmartigan through a series of levels with lots of nooks and crannies to explore. It’s hardly what I’d consider vast, but it’s really charming and fun. There are caves with shops, treasure chests everywhere, and it’s just good old fashioned Capcom arcade action fun. 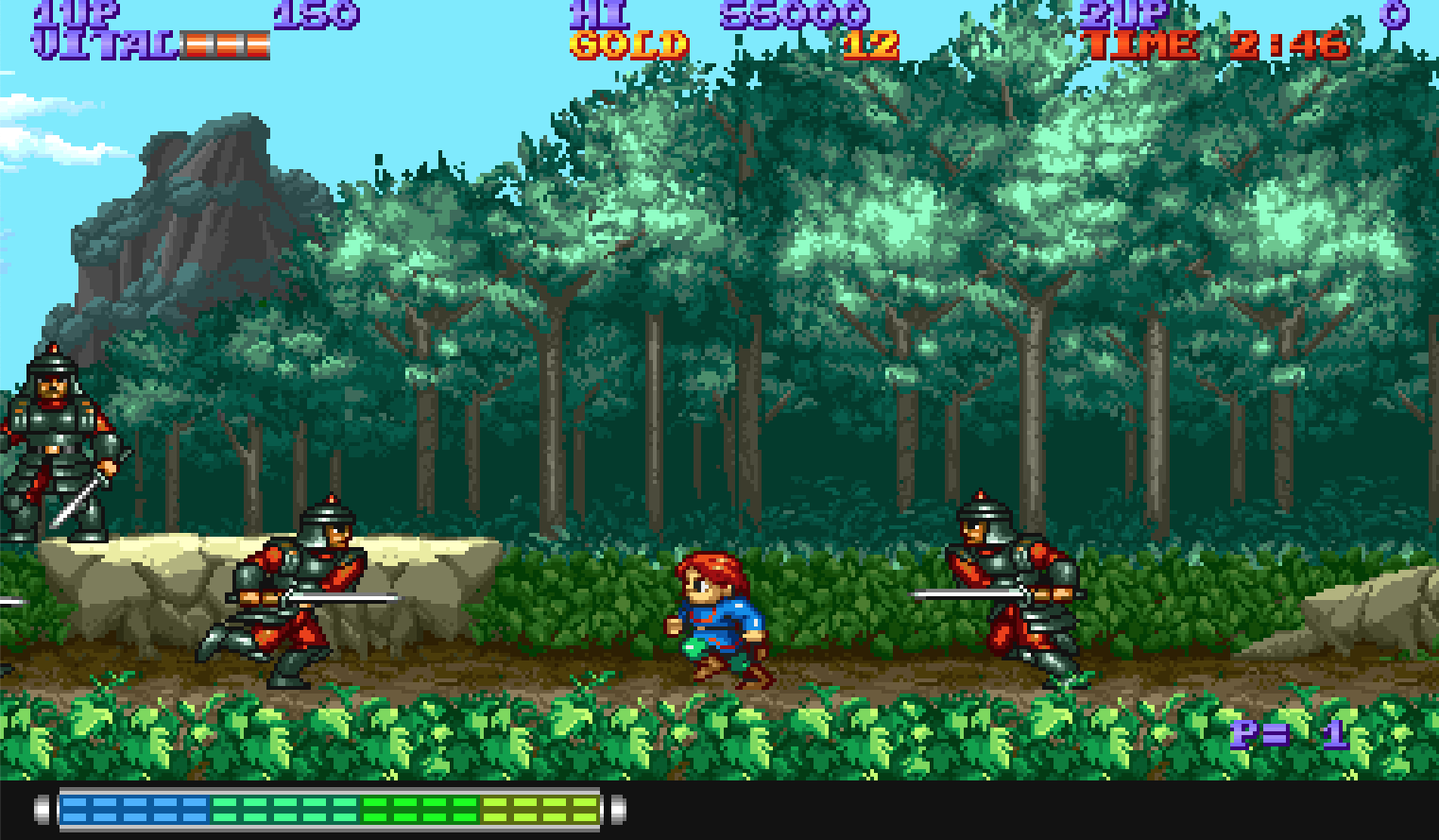 Both Willow and Madmartigan control pretty similarly. You move left and right pretty quickly, and your standard jump is let’s say higher than Mario in Donkey Kong, but not quite as crazy as Mario in Super Mario Bros. You can augment your jump by holding up on the joystick, similar to Altered Beast, and you can then grab ledges to explore new areas. The major differences between the two come in their size and attacks. Obviously Willow is a lot smaller than Madmartigan, but Willow has a much better reach as his attack is a little magic fireball thing while Madmartigan swings a sword that has understandably less distance. 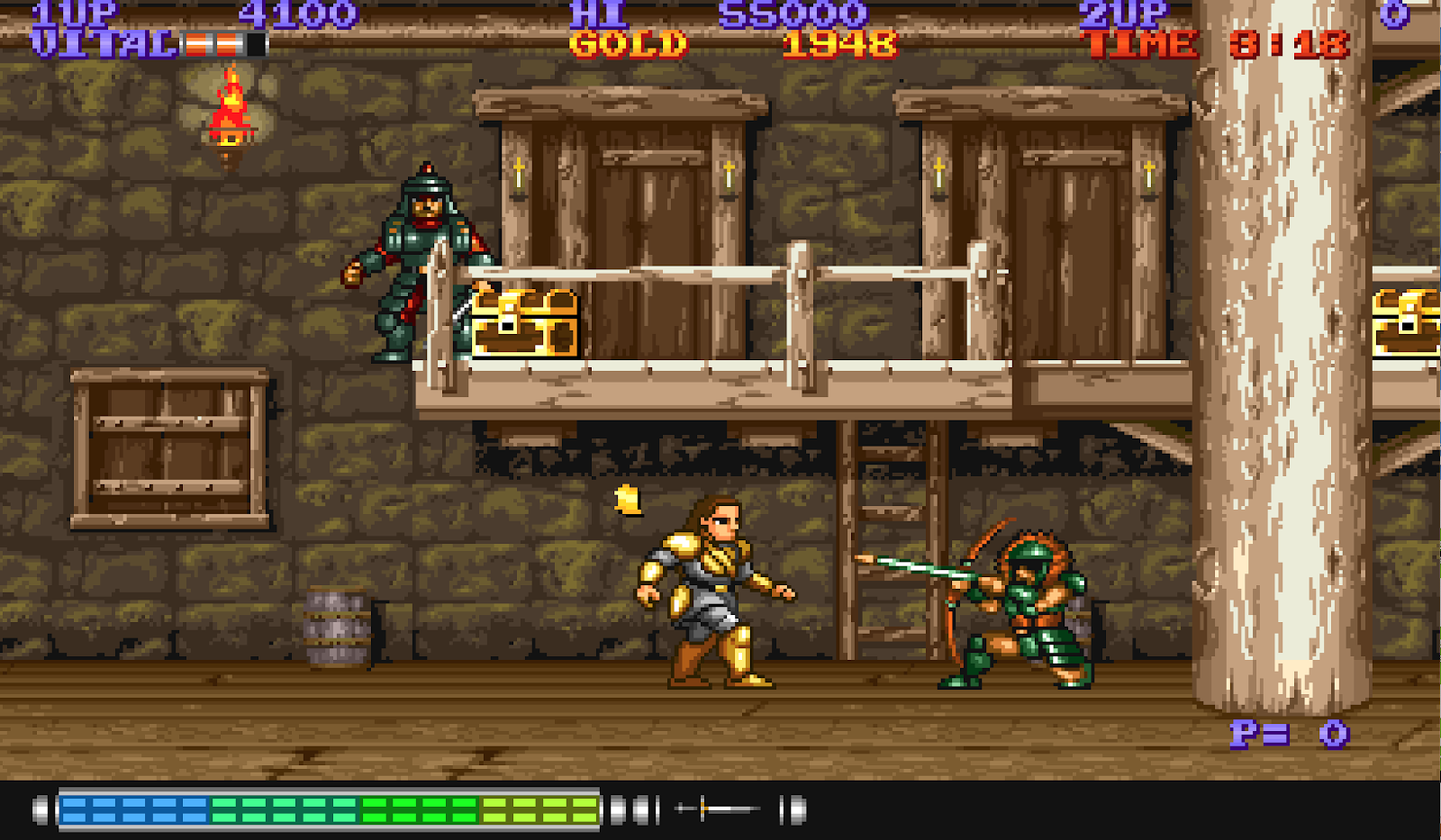 No matter which character you’re using though, this game is a blast. It’s not very long, and it’s pretty cheaply difficult at times because well, it’s an arcade game that wants your quarters, but the graphics and sound are top notch classic Capcom fare. Absolutely well worth your time. 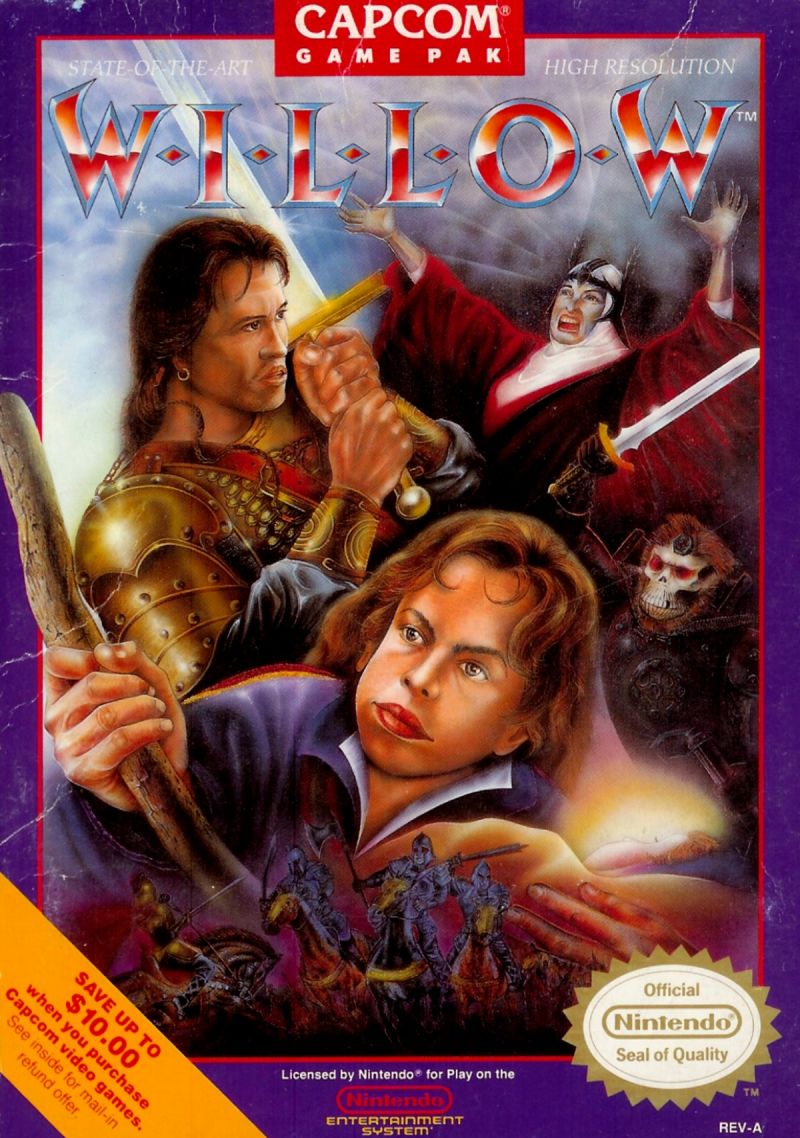 Finally, we have Willow for NES. This one was released in late 1989, and also hails from Capcom on both the development and publishing sides. This was one of those NES games with the purple border on it, which is already a great sign of its contents. This game is a lot more complex than its arcade counterpart opting for a more Zelda-esque top down action RPG angle. You control Willow as you set out on a quest to loosely follow the events of the movie. It’s not super obvious at first exactly what you’re supposed to do or where to go, but once you get the hang of things, it’s a really good time. You walk around town and get some magic acorns, and a sword for melee attacks and then you’re off to adventure! 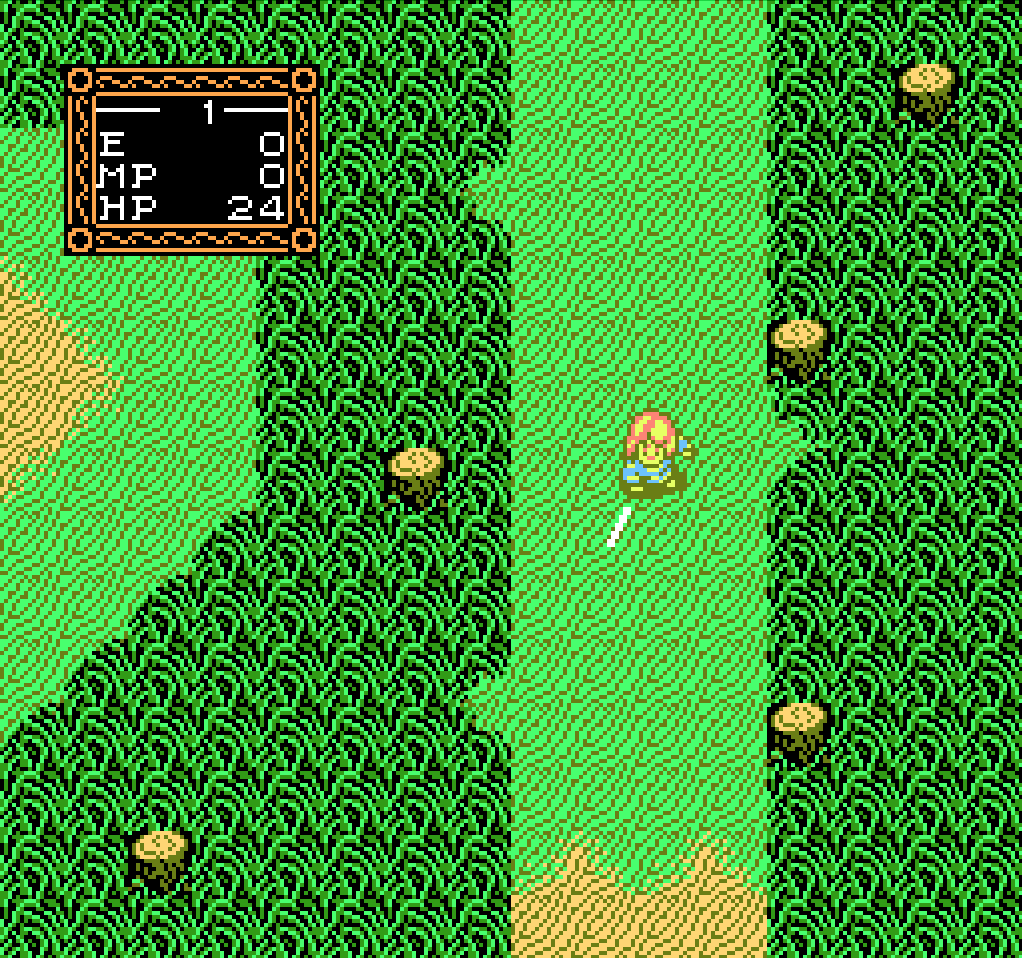 Sword swinging takes some getting used to because it’s WAY slower than you expect it to be. The game actually warns you about this though, so it’s obvious this isn’t some bad design decision, but more something you have to work your way around. Don’t worry, It gets faster as the game progresses and you continue to level up your character.

Like The Legend of Zelda on NES, Willow plays out one screen at a time. It does something pretty interesting with the sound design though where the music changes when danger approaches, sort of like in a turn based RPG, or more like the later 3D Zelda games. It’s really pretty cool because the environment starts animating wildly too like there’s a bunch of wind blowing through. 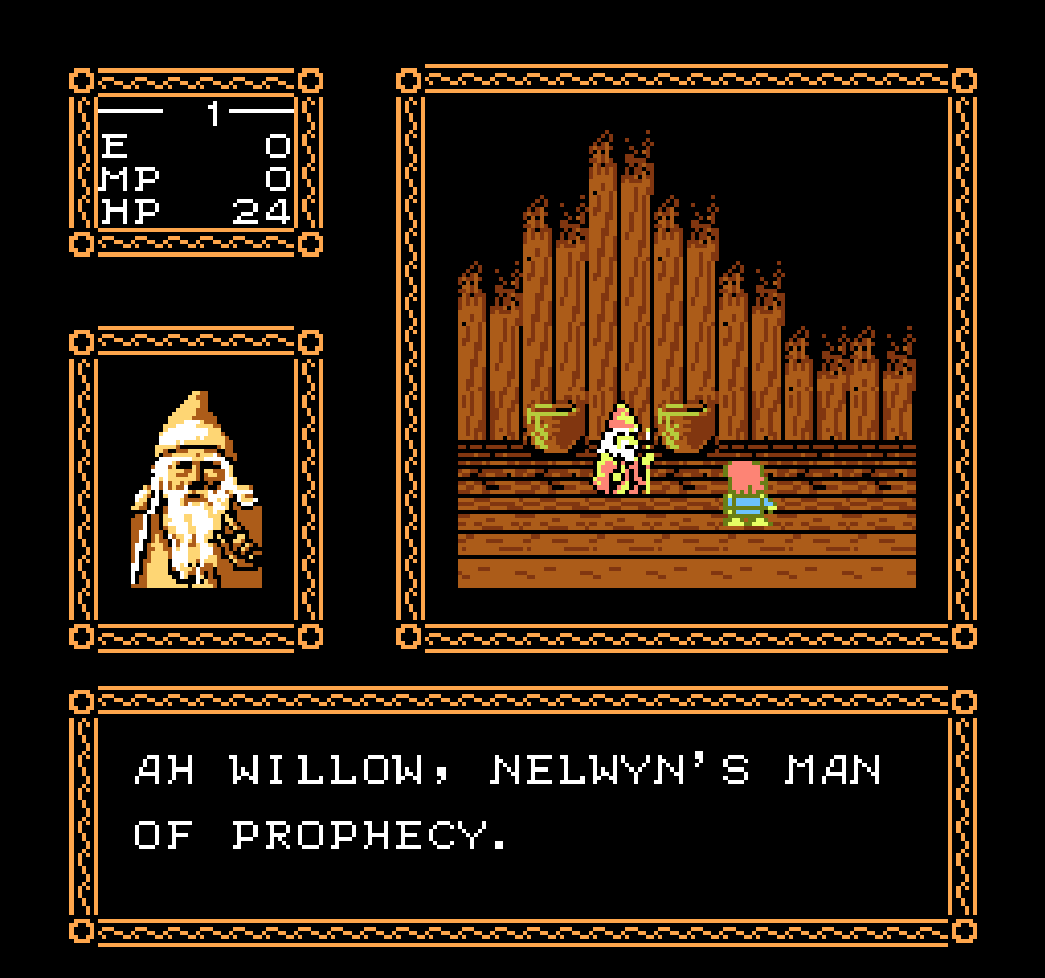 The visuals aren’t the best on the platform, but they’re nice enough to look at, and the music is pretty wonderful overall. It’s classic Capcom NES stuff, so there’s a lot to love here.

I haven’t spent a ton of time with this one, but what I have I’ve enjoyed. I’d love to really dive into this one someday because it’s got a lot going for it. I’m certain that had I played this game as a kid it would have been one of my favorites, what with my love of Capcom, NES games, and the movie it’s based on.

So there you have it. One movie, and 2 video games that are well worth your time. Maybe some books too, but I can’t really speak to them, and since the show is starting today I haven’t seen any of it yet, but I have a good feeling about it.

Will we see any sort of revival of these classic games? Difficult to say. I sure would love to see some sort of re-release on modern platforms, and maybe if this new Willow show is successful that will happen. I’m not holding my breath, but I am happy I discovered them regardless. And with Willow being a bit more in the spotlight these days, maybe more people will too.