Ahh, CDs. At one point in time they were the future of storage, and video game companies couldn’t wait to ditch expensive cartridges in favor of this amazing new medium. So much so that just about every big name in the industry decided to create a series of weird half-measure consoles to upgrade their current hardware instead of waiting for their next generation iterations. It seemed like a great idea at the time, right? Why create a whole new system and have to go through the process of fostering a new audience when you have a built-in customer base already?

The answer to that is complicated, and there's a reason you don’t see add-ons like this anymore. Well, besides the fact that physical media isn’t what it used to be. But it was a fun time to be a gamer for sure because boy were these systems wild. Let’s take a look at who did what. 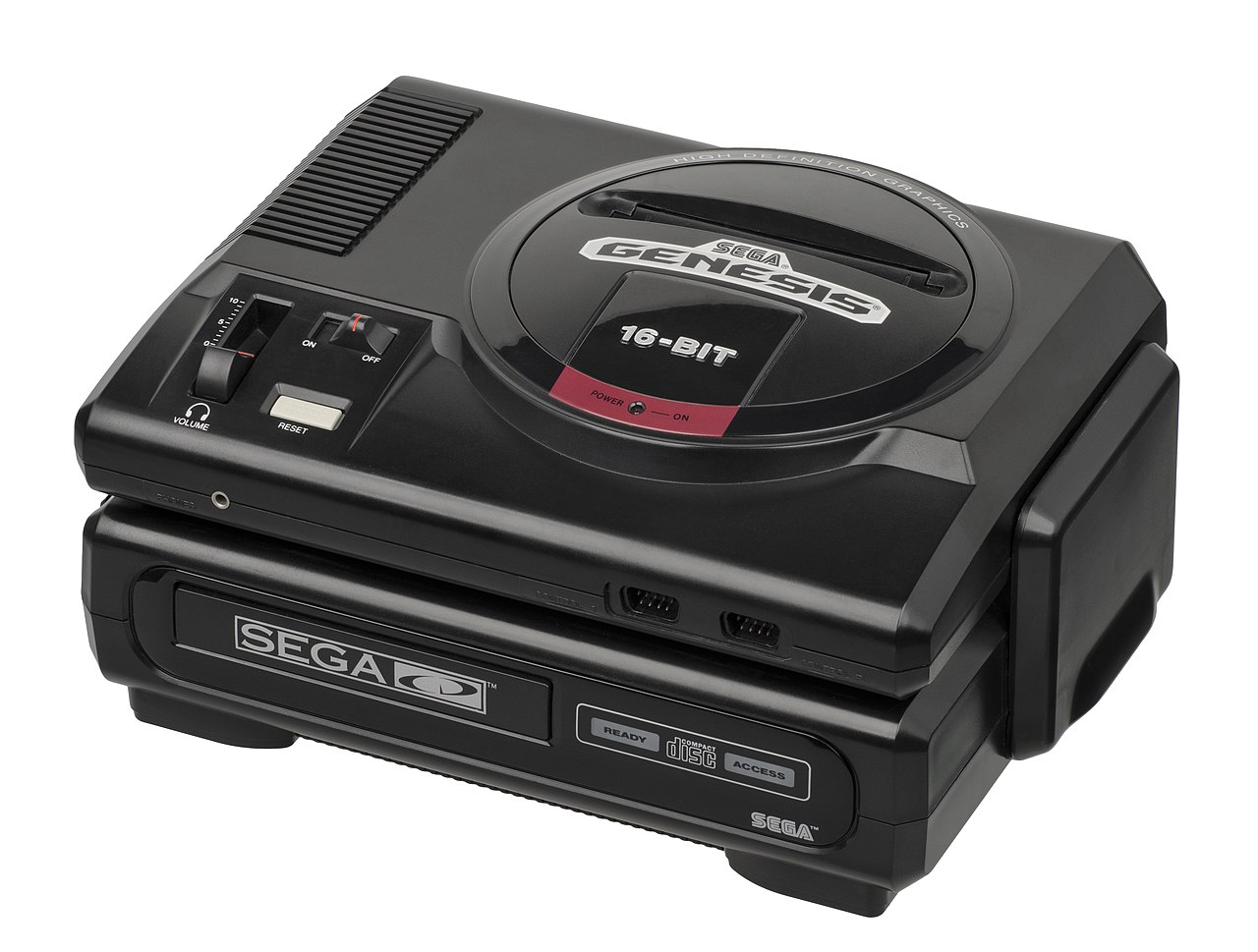 Sega was probably the most successful at this CD transition because everyone knew what the Sega CD was. Not everybody saw the appeal and certainly not everyone who owned a Sega Genesis bought one, but Sega supported the heck out of this technology, so much so that the Sega CD saw several revisions. Their first version attached to the bottom of their original Genesis models and had one of those motorized doors. When they redesigned the Sega Genesis to be smaller, they made a new version of the Sega CD to fit next to that system that had a flip top tray instead of a motorized drive. The coolest version was without a doubt the CDX though, a literal portable CD player that doubled as a Sega Genesis/Sega CD combo that you could plug into a TV. That thing was wild.

As for the game library, well that’s a bit of a mixed bag. There were plenty of great games released for it like Snatcher and Sonic CD, but the system’s lasting legacy is without a doubt the endless parade of FMV games like Night Trap and Sewer Shark. Hours of grainy live-action “playable” video game cutscenes were all the rage. They looked disgusting back then too, but there was still something quite impressive about them at the time, and they're not without their charm today. Of course, Sega followed the Sega CD up with the notoriously poorly performing 32X, before moving on to their true next generation platform the Saturn, but by then the damage was done. Sega CD though, is looked back on fondly, and that’s not nothing.

SNK took a radically different approach to CD technology. Their system, the NeoGeo, had quite a reputation. It was true arcade technology in a home console, but it was EXPENSIVE. Prohibitively so for the vast majority of gamers in its day, and as a result there were very few units in homes here in North America. What SNK decided to do instead of creating a CD add-on for their existing hardware that nobody owned, was to create a whole new system… sort of.

The NeoGeo CD isn’t so much a new system as a new version of their existing system with a CD drive instead of a massive cartridge slot. This meant re-releasing many of their existing games on CDs, but they were considerably less expensive to produce, which meant they were considerably less expensive for consumers to buy. And when your games average around $300 a piece, that’s a heck of a thing.

The problem was the timing, especially in the US. In other parts of the world there was a little more leeway, but by the time the NeoGeo CD hit the US in 1996, the PlayStation and Saturn were already on the market, and in terms of raw power, those platforms absolutely blew the NeoGeo CD out of the water. Even at a lower price point, there was no way that system was ever going to be able to compete in a market that was full of CD-based systems like the CD-i, 3DO, PlayStation, and Saturn. Even Nintendo’s clunky cartridges left NeoGeo in the dust.

Still, there were some great games made for the platform, some of which never made it onto traditional NeoGeo cartridges. Loading times were absolutely awful on the system, but thanks to new aftermarket technologies, that can be made into a thing of the past. This is one CD platform that has truly gotten better with age. 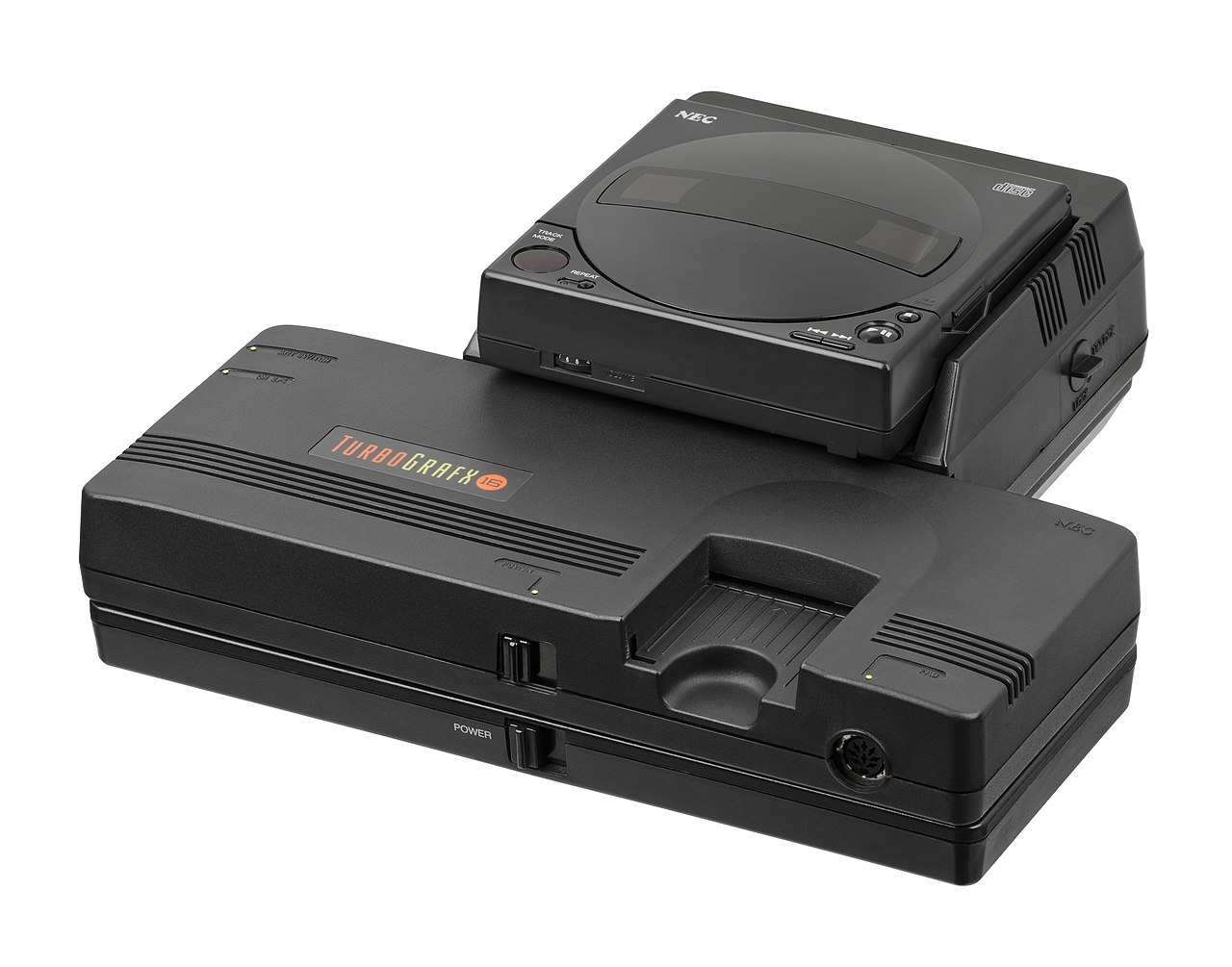 NEC’s TurboGrafx-16 system never really caught on in the US, but that didn’t stop them from trying their best to keep up with the competition. Like Sega, this was an add-on for its existing hardware, but believe it or not this thing beat Sega to market by quite a surprising amount of time. The TurboGrafx-CD launched in North America in November 1989. The Sega Genesis itself launched in North America just a few months prior in August, and the Sega CD didn’t show up until October 1992. That’s absolutely bonkers when you think about it.

Head start or no, the system wasn’t much of a success in North America and as such a lot of people missed out on a lot of great games, especially ones that never saw localization in the West. Probably the most famous of these was an exclusive Castlevania game released for the PC Engine CD system (the Japan equivalent of the TurboGrafx-16) which is lauded as one of the best entries in the series. Rondo of Blood eventually got re-released on more modern platforms, but for a very long time the only way to play this game was on NEC’s wacky little CD add-on.

I say wacky because it seems like there was a serious lack of thought given to this console’s physical footprint. The CD add-on connected to the back of the already T-shaped system, and only proved to make it deeper and more unwieldy on your shelf. 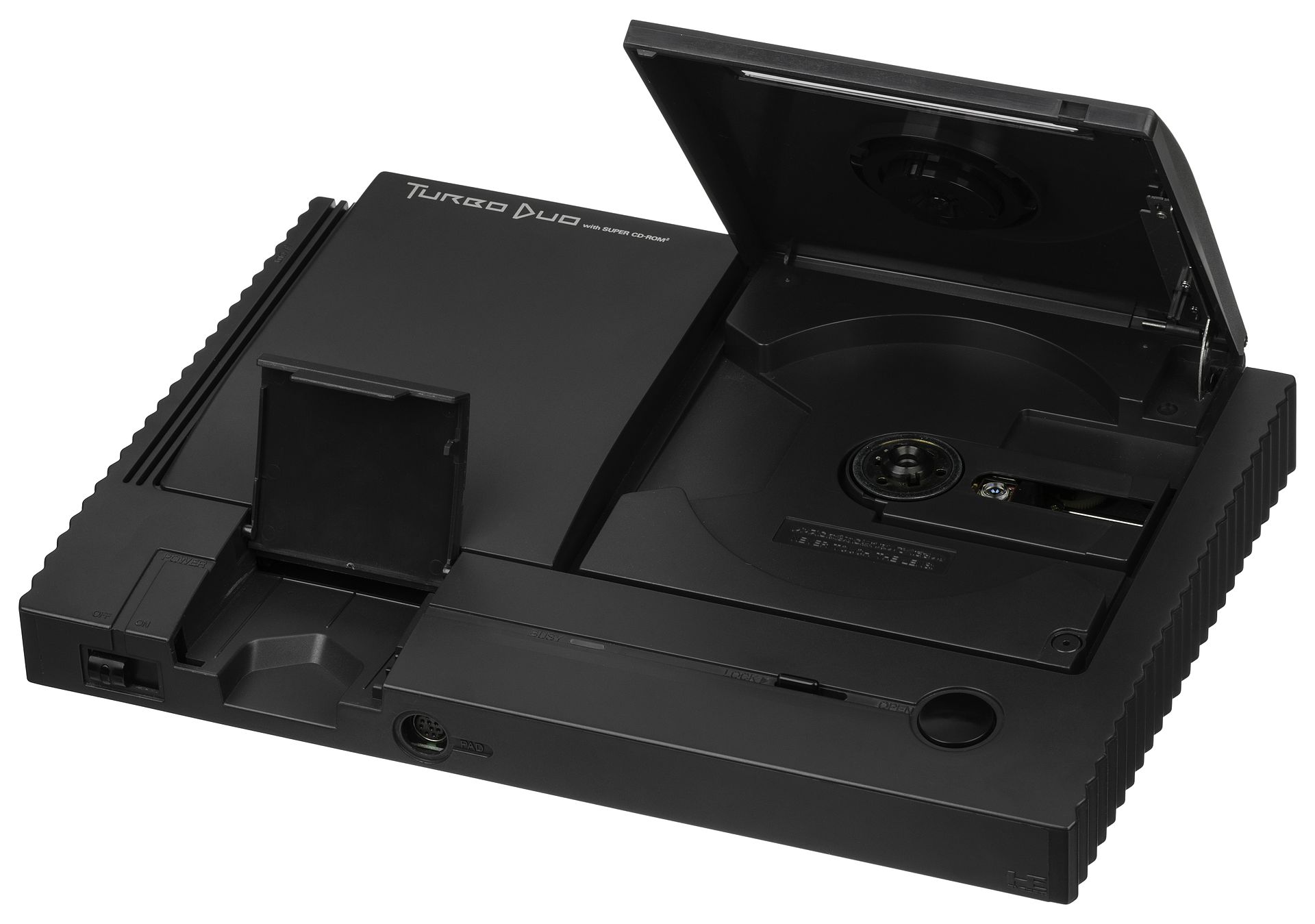 These things are crazy expensive today, probably because they’re legitimately uncommon since nobody bought them. Fortunately there are modern solutions that allow for Turbo CD games to be played without having to track down one of these relics. Eventually NEC made a combo system called the Turbo Duo that functioned as an all-in-one unit that thankfully wasn't shaped like a T, but that's another bank breaker to track down today. 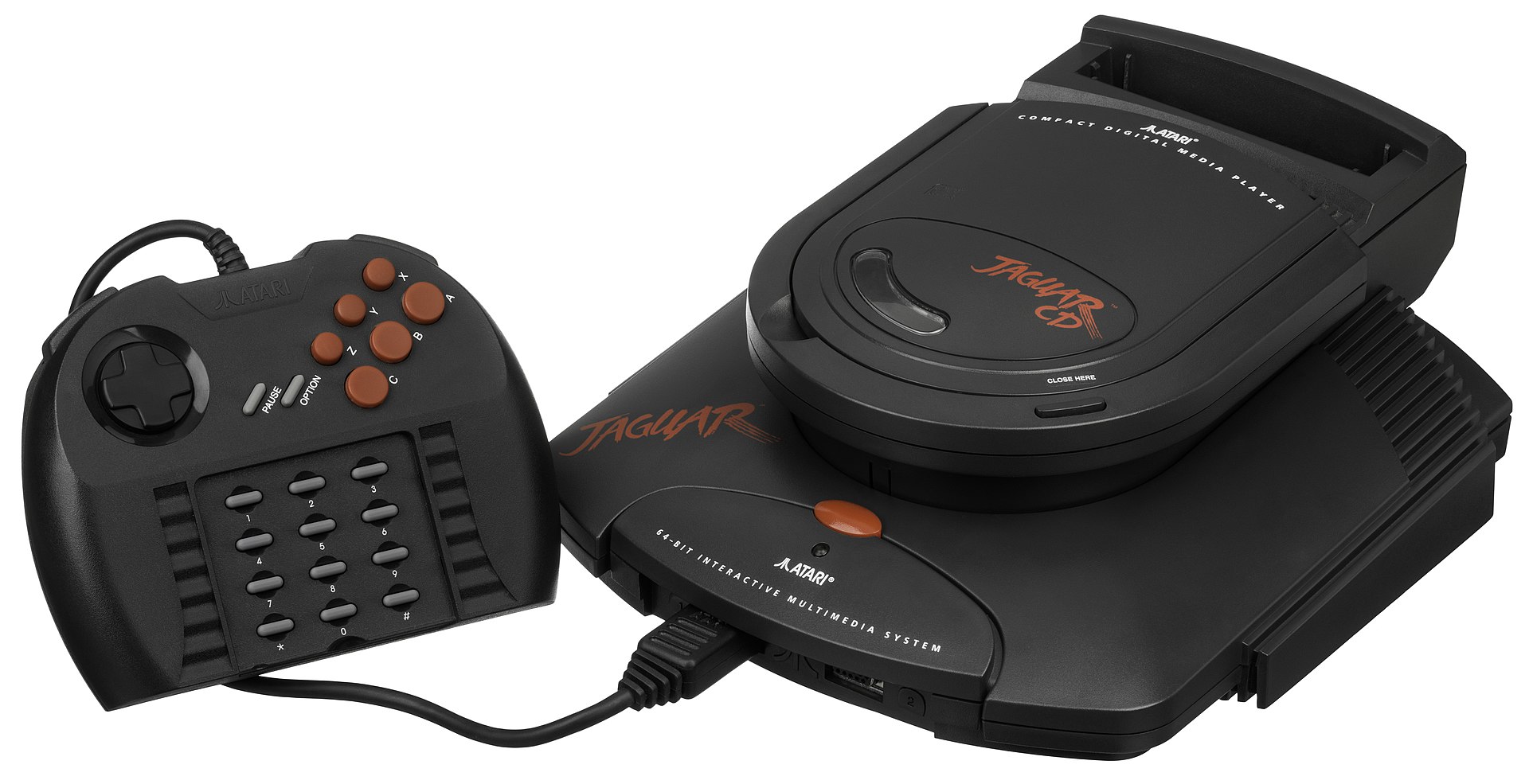 Speaking of systems that failed to gain traction, Atari’s Jaguar was engaged in a near constant struggle to stay alive in the mid 90s. When it launched it claimed to be 64-bit technology, which if you did the math was a MUCH higher number than 16 or even 32-bit systems. The thing was, while they technically weren’t lying, very few were able to actually coax anything resembling games that looked and played better than what the Super NES and Sega Genesis were offering at the time. Thus the Jaguar sat on store shelves, waiting for that killer app that showed off what the system was capable of.

But in 1995, Atari launched a last ditch effort to compete in the form of the ill-fated Jaguar CD. A whopping 13 games saw release before it was discontinued, losing out to even the Virtual Boy in terms of total game count (the Virtual Boy saw 14 US releases). The units were also plagued with defects, making the aftermarket a real challenge these days. Finding a Jaguar CD unit is hard enough, but finding a working one is nigh impossible.

Still, there’s a fairly active homebrew community out there making games for the Jaguar CD, and digging up unreleased official games to see what could have been. Word is there might even be a way to play these Jaguar CD games without the use of an actual Jaguar CD unit with the use of the Jaguar Game Drive! 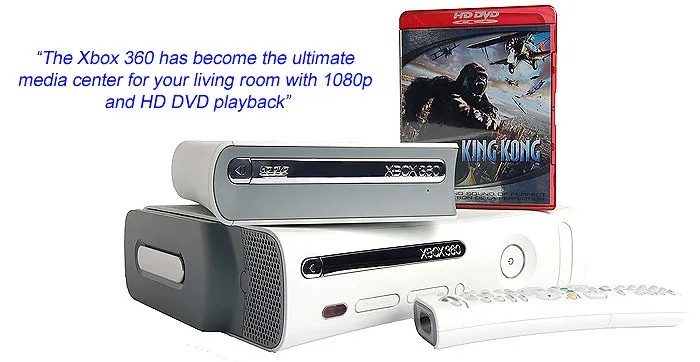 Have you ever seen the Xbox 360 HD-DVD Player? Yeah, I know this isn’t a CD add-on, but it’s so wacky I had to include it. It’s a disc drive add-on for a system with a disc drive! Just look at this thing! I love it so much.

The outlier in this department was without a doubt Nintendo. They famously had a deal with Sony to create a CD add-on for the Super NES, and when that fell through they created the PlayStation instead. Nintendo wasn’t immune to creating add-on devices though, they just suck with discs instead of CDs. Way back on the Famicom they created the Famicom Disk System which was where classics like Metroid, The Legend of Zelda, Kid Icarus, and even Castlevania made their debuts, but once people figured out how to include different expansion chips in their Famicom cartridges the Disk Drive’s usefulness more or less vanished.

During the Nintendo 64 era they tried again with the 64DD, a new high capacity disk drive add-on that never made it out of Japan thanks to poor sales. That’s a pretty wild system to look into as well as it includes a number of cool exclusive games.

CDs hold the largest legacy in terms of console add-ons though. They were such an exciting technology at the time that they disrupted the entire industry in incredibly interesting ways. Will we ever see something similar again? There was the whole motion controls craze when Nintendo launched the Wii and then Microsoft and Sony brought out Kinect and Move shortly after, so who knows? Time will tell.