A  few more of Nintendo's best

Promo posters are fun no matter what game company they’re from, but for me, the most interesting stuff always came from Nintendo. That’s why we’re swinging back around to take a look at some of the cool stuff I missed the first time around.

I had a look through my giant box of instruction manuals and whatnot and pulled out a handful of fantastic vintage Nintendo salesmanship. Let’s have a look!

Let’s start with this weird little doodad. I don’t think this one came in an actual game box, but rather, showed up as a sort of giveaway in stores or something, but I could be wrong. Either way, it’s aggressively horizontal. 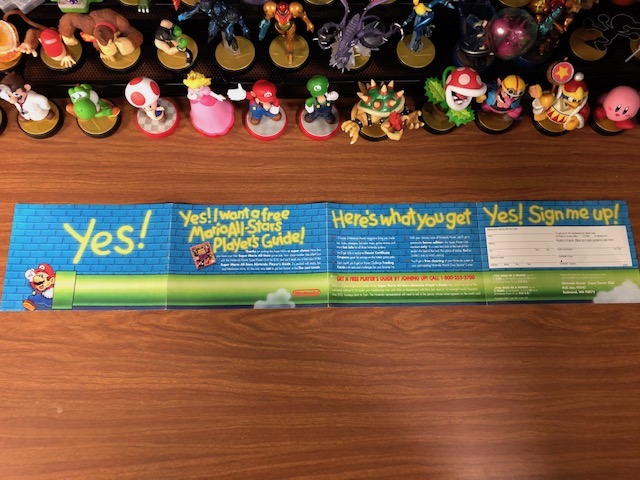 The first side isn’t really all that remarkable. Mario’s jumping out of a pipe and telling you to subscribe to Nintendo Power to get strategy guides. Fun, right? What’s kind of weird though is that the whole thing is set on a backdrop of blue bricks, with the text mostly displayed as neon yellow spray paint. How odd. Let’s flip it over, shall we? 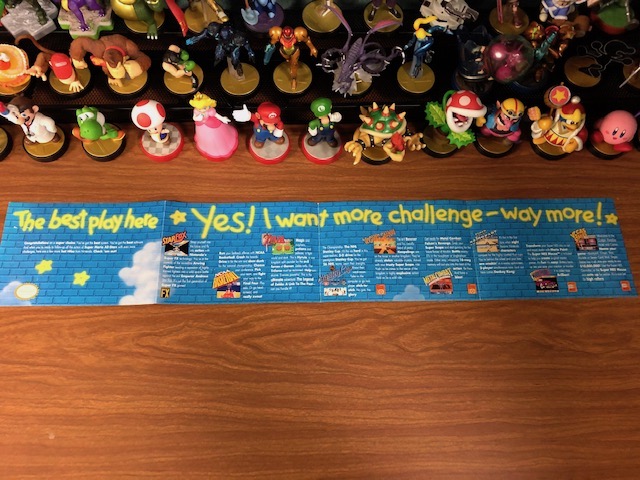 One thing I love about Nintendo is their willingness to keep some of their older games in the limelight alongside their newer ones. They’ve got their second wave of Super Scope titles, Mario Paint, and their hot new hit Star Fox, but they also have Zelda chilling right there with them. SNES games are awesome.

Fast forward a couple of years and we come across Nintendo’s “Play it Loud” period. In response to Sega taking a chunk out of their market share by presenting themselves as the “cool” option, Nintendo tried their hand at being "cool" themselves for a time. 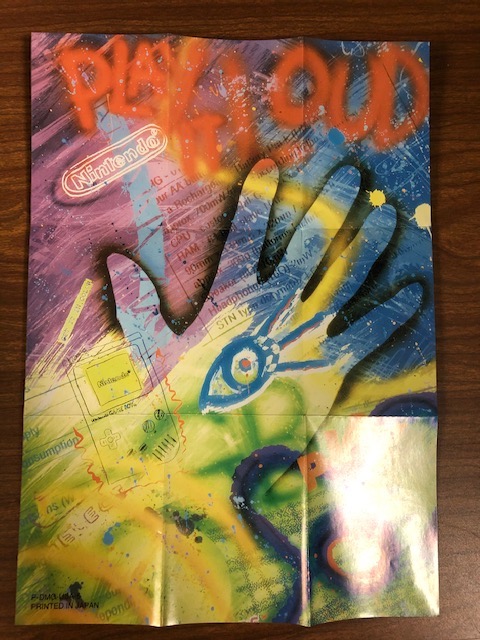 The results were mixed, but some stuff wound up being legitimately great to look at. This Play it Loud poster here is weird, but it’s also a pretty nice-looking piece of art. It doesn’t make me want to pick up a Game Boy, but it isn’t outwardly stupid, and that has to count for something, right? Anyway, the back is where the real goods are. 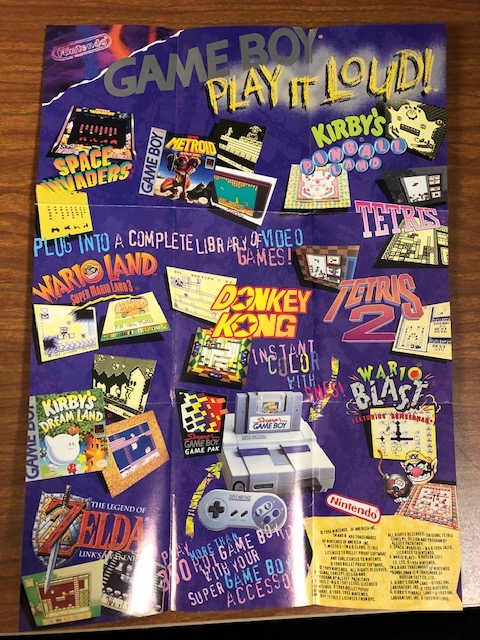 So, around this time they were really pushing the Super Game Boy and its ability to add “color” to Game Boy games. The Super NES was doing pretty well, but adding an entire second library of games to its repertoire was a great selling point against the Genesis.

As far as design is concerned, this thing is fantastic. Everything is staggered in a very eye-catching way, the full color logos keep the poster from looking too bland thanks to the Game Boy’s monochromatic display, and it’s visually super informative. Each game has a Game Boy and Super Game Boy screen shot, which makes an excellent case for the peripheral.

More than anything though, look at that diverse lineup! Sometimes I forget just how many absolutely great games the original Game Boy had. This is a glimpse of some of their best stuff and it doesn't include any Mario games. (Unless you count Donkey Kong)

Sticking with the Game Boy, here's some all-time classic stuff. Harkening back to Nintendo’s “Now you’re paying with Power” slogan, this was, to my knowledge, the first Game Boy promo poster, stuffing the word “portable” in the tag line to great effect. 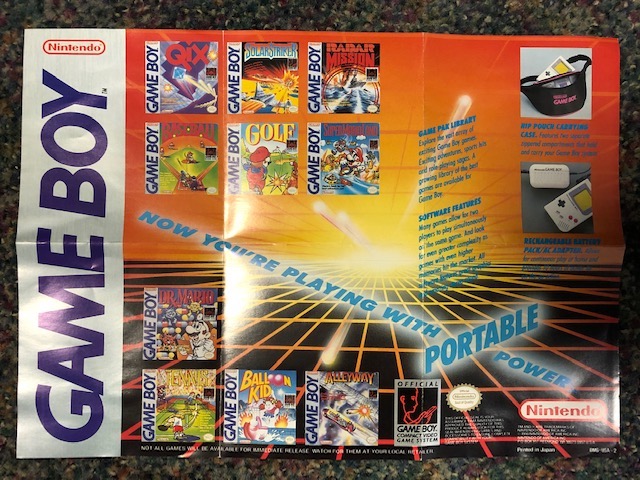 I’ve always loved this old look, with the beams of light zapping past the black and orange grid lines. The first few years of the Game Boy also featured some of my favorite box art ever, which is looking mighty fine here.

While we’re still playing with power, here’s an alternate version of the classic gray exploding Playing with Power poster. I think this was the last NES one that used that slogan, and it’s a pretty nice looking one. Nintendo had transitioned to a sleek dark blue/space theme for their NES stuff by this point, and they had these great bold red icons made for the different “series” of games they had. 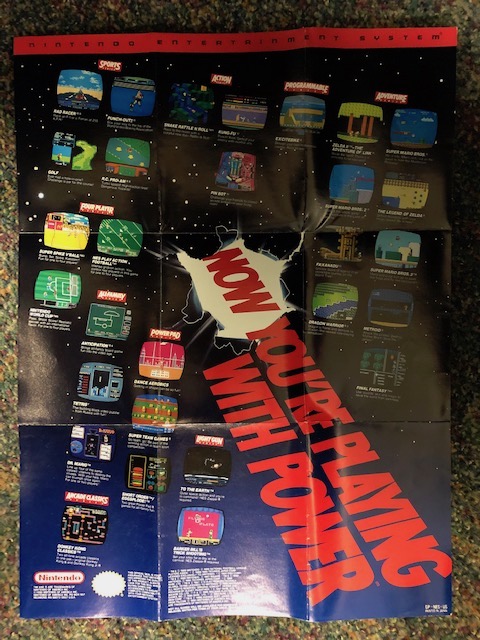 Here we see Rare’s work on full display, with Anticipation and Snake Rattle n Roll looking nice. Both Square and Enix got to show off Final Fantasy and Dragon Warrior respectively next to Nintendo’s Metroid, and the second wave of Power Pad games were coming around, featuring the excellent Short Order/Eggsplode.

This was also the era of some of my favorite NES box art, with the solid red bar across the top of the box unifying the brand for the most part. A great look that they kept up through the end of the console’s life, and added that extra layer of cool to this poster. 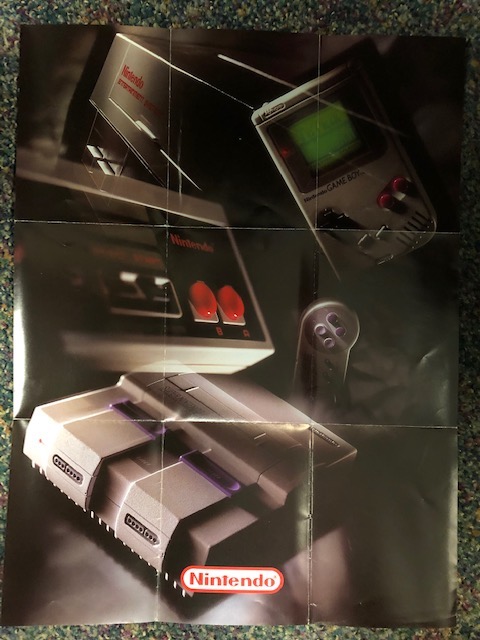 Sticking with the same branding, this great little poster here was from later in the NES’s life, and it’s just one of the prettiest images a Nintendo fanboy could have hoped for as a kid. This was my absolute favorite era in all of gaming right here (the transition between 8 and 16 bit), and few images sum up my love of it more than this. Glamor shots of game consoles rule.

Let's have a look at the other side. 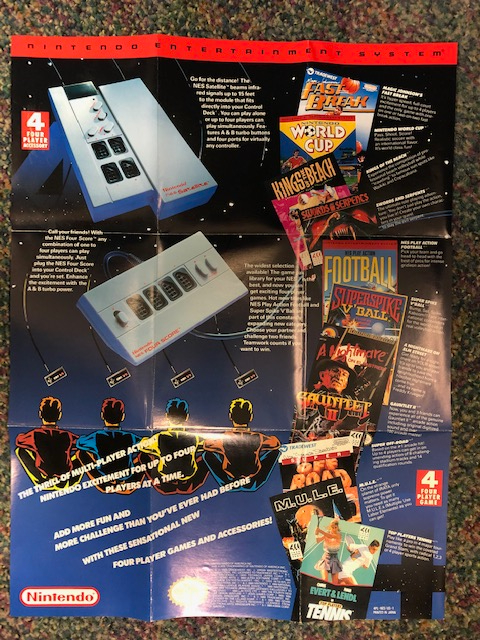 Still with the red bar and blue space branding, this one is focused on their new 4-player stuff, which was something the 16-bit big kids hadn’t gotten a handle on yet. There are some all-time greats shown off here too, like Super Off-Road and Super Spike V-Ball. The illustration of 4 identical kids in different colors is a little weird, but it’s still a pretty effective poster.

But can we talk about the Satellite for a second? What a weird little thing, right? A wireless multitap. I was rarely able to get the thing working right. Someone always pulled their controller and moved the satellite out of its line of sight. Four Score for the win. 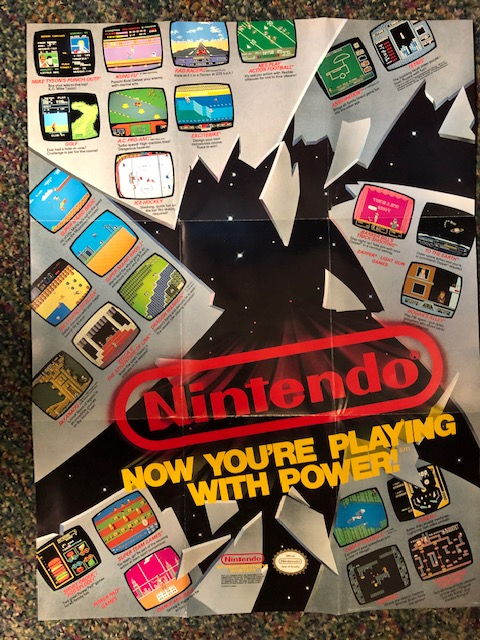 And that just about does it. Just to leave things off on a classic, here’s the other version of the old exploding gray one we talked about a few weeks ago. I feel confident this poster is the reason most people even know what a Faxanadu is. I know it’s the reason I sought it out.

Come back next week for the last entry in this promo-loving series. We’re going to be taking a 2-part deep dive into some of the coolest stuff I have, promotional PAMPHLETS! Because who doesn’t love a good pamphlet? In the meantime, if these old images have you feeling the itch to jump in and play any of these classics, we’ve got some excellent ways to do so available right now. 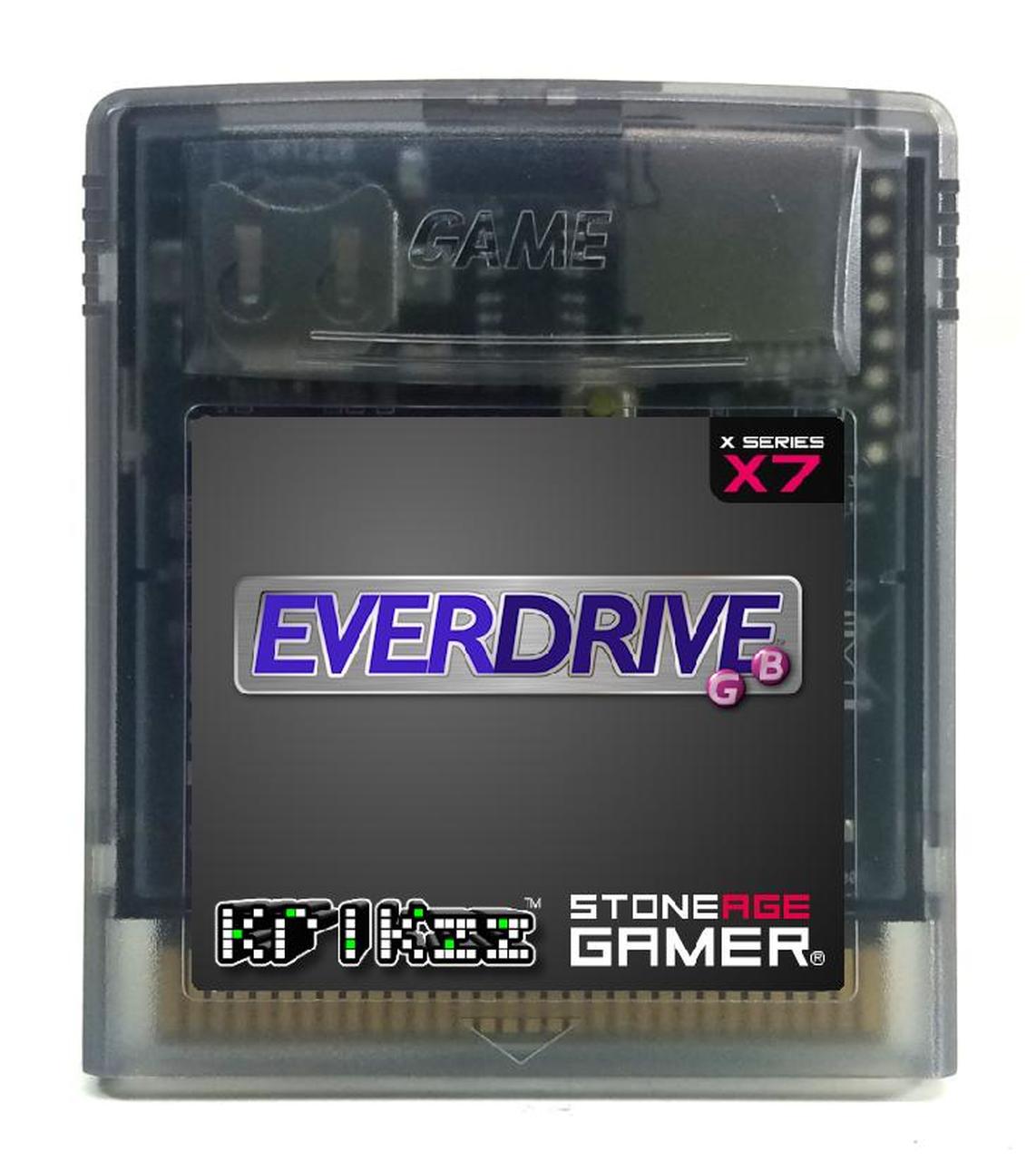 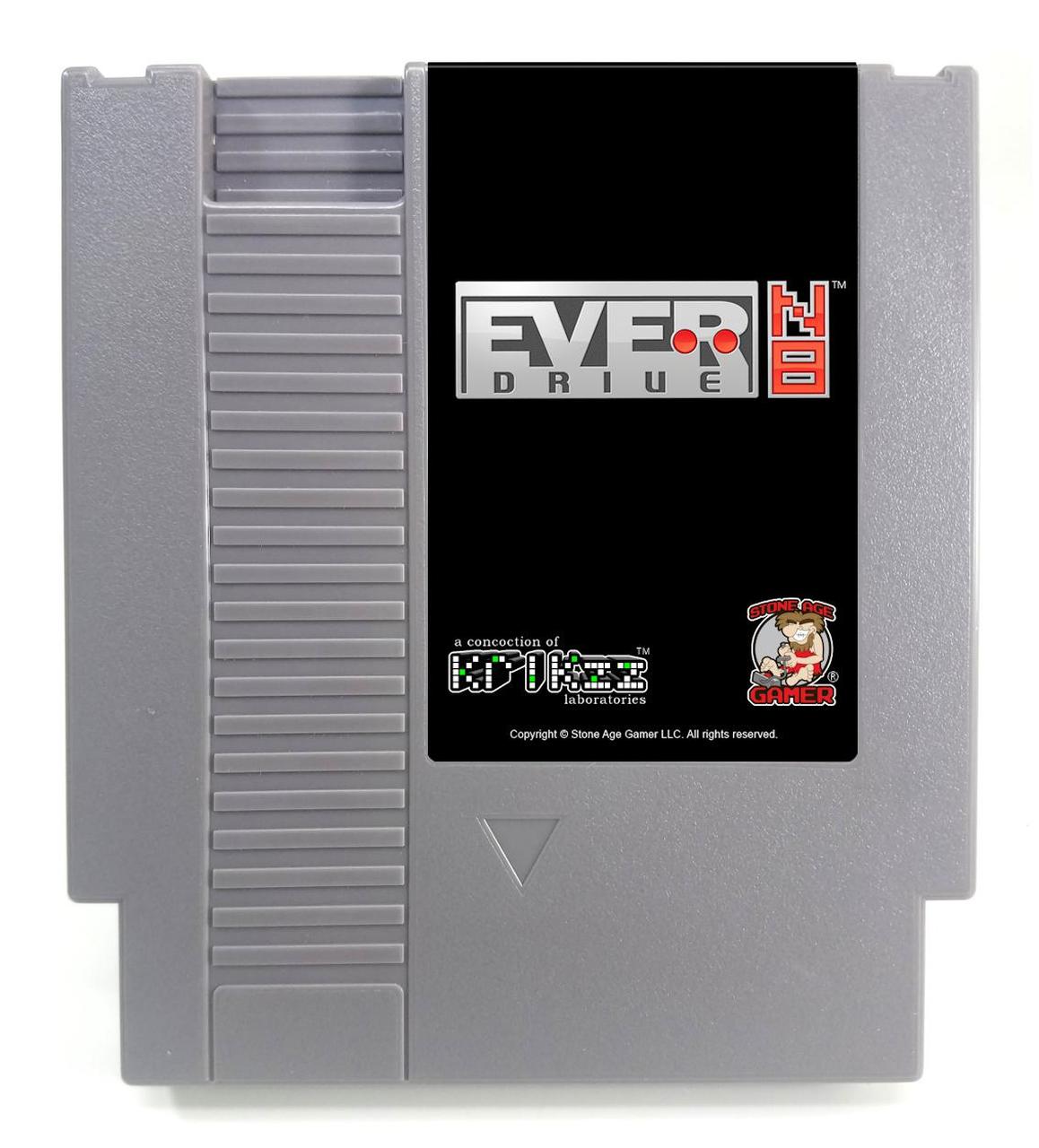 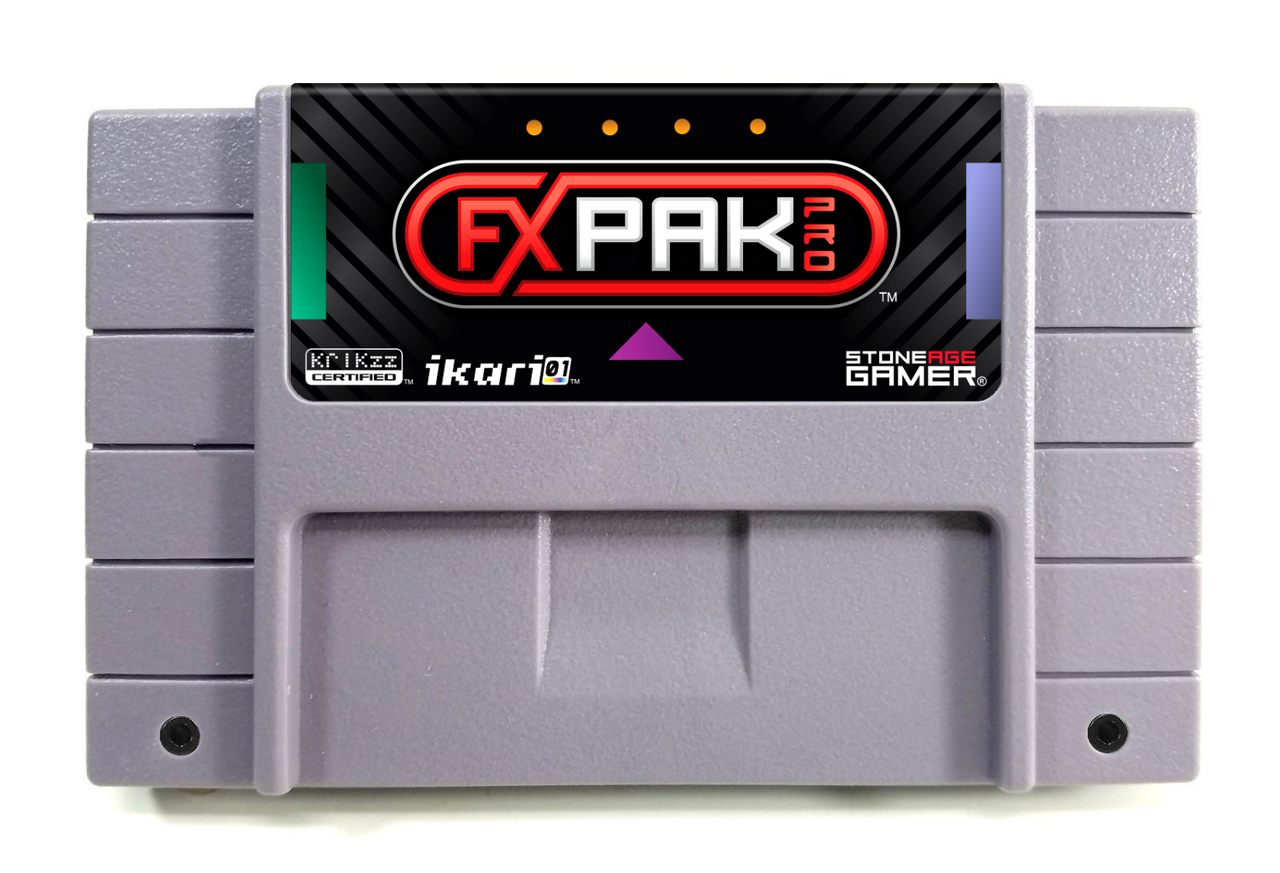 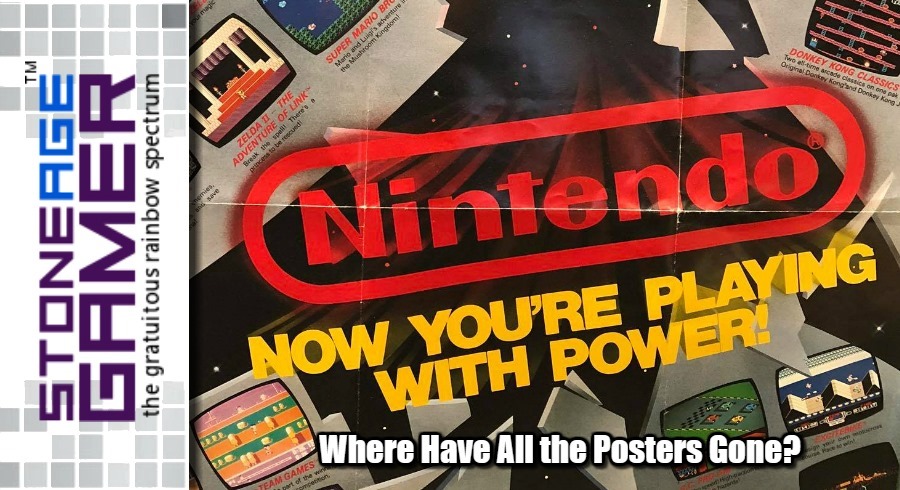 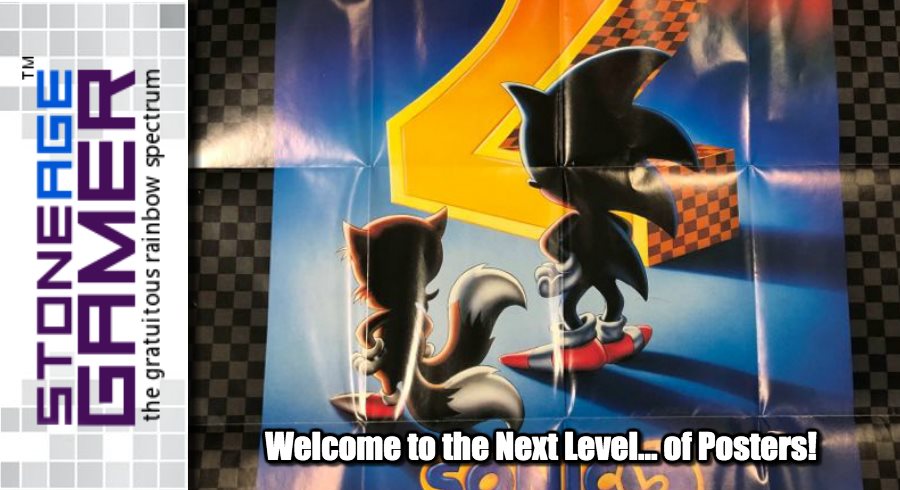 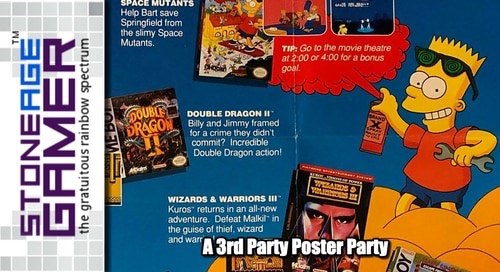 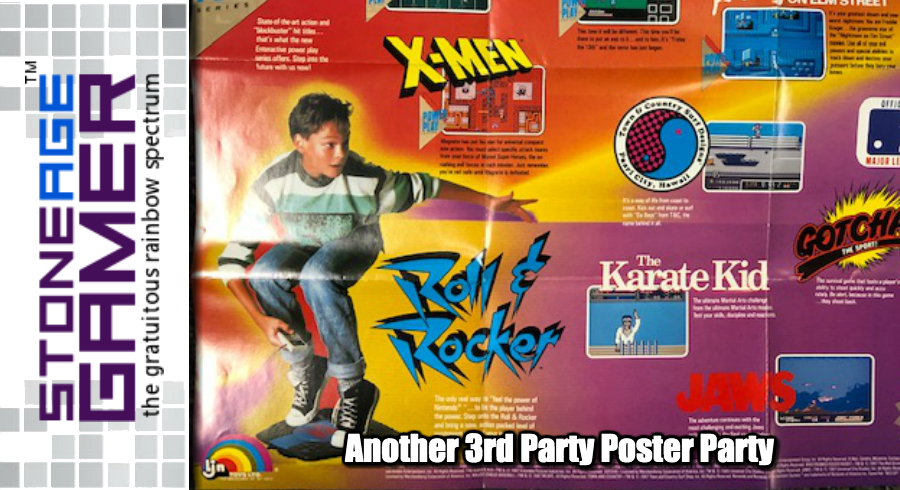