The Grass is Always Greener

A few years ago, I wrote a piece about the things Genesis did that Nintendidn’t that made me, a Nintendo super fan, pretty jealous in my youth. I’ve thankfully grown out of my idiotic “console wars” state of mind so that I can enjoy and appreciate games existing on all platforms, but back then, I wouldn’t allow myself to outwardly let Sega score any points in the all-important battle between the Super NES and Sega Genesis.

Now that Sega Genesis games have come to the Nintendo Switch, it got my mind wandering about the things that made me secretly wish I had a Genesis sitting next to my Super NES once again. I went back and looked at that old post from a few years ago and realized that while yes, those were indeed my top 5 reasons I wished I owned a Genesis during its heyday, there were still so many more. 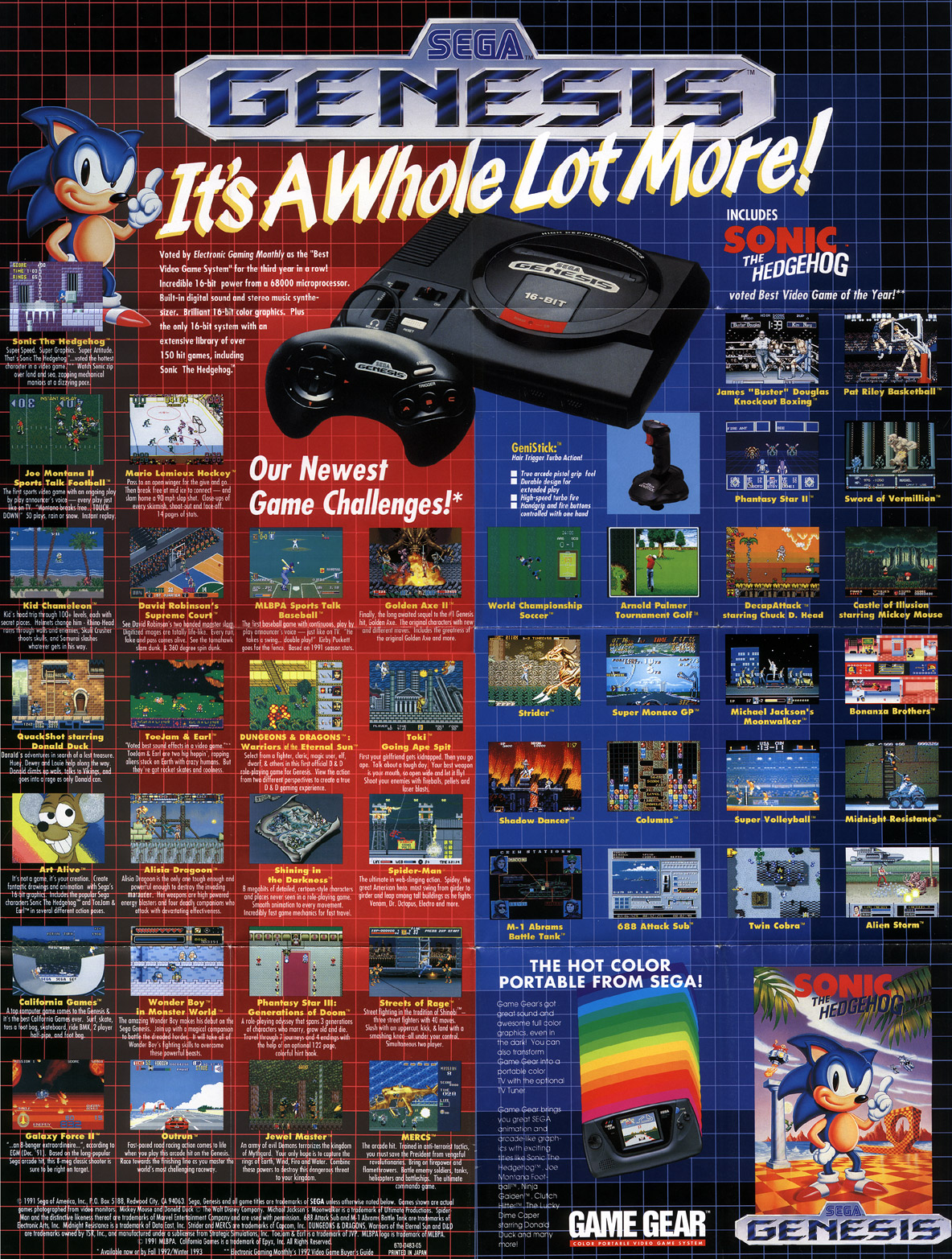 If you weren’t there, it’s hard to overstate just how much those console wars were the stuff of legend in my young mind, and having exclusives like Donkey Kong Country and Chrono Trigger made me confident in my claims that the Genesis was trash and the SNES was the only console that mattered! But, and I can not stress this enough, that’s pure idiocy, and it cost me dozens of great gaming experiences that I should have been enjoying all along.

I still ultimately prefer the Super NES to the Genesis by a very wide margin, but I’ve since grown to respect and admire everything that was accomplished with Sega’s 16-bit wonder. So here’s another 5 things that made this Nintendo kid secretly jealous of his Genesis-owning friends.

A Possum, a Jetpack, and a Sword

Rocket Knight Adventures is one of the very best 16-bit action games ever created. It does just about everything it could possibly do right. It’s got a fantastic main character design, incredibly memorable and effective music, and unbelievable graphics for the time.

Take Sparkster himself. He’s a possum in a suit of armor with a jetpack and sword that shoots lasers. He’s also adorable. I love everything about this design, but the great art doesn’t stop there. Everyone in the game from the other Rocket Knight character to the evil pigs are fantastically expressive and gorgeously drawn. There were some crazy cool bosses too that were so impressive they wouldn’t have felt out of place in a Contra game. 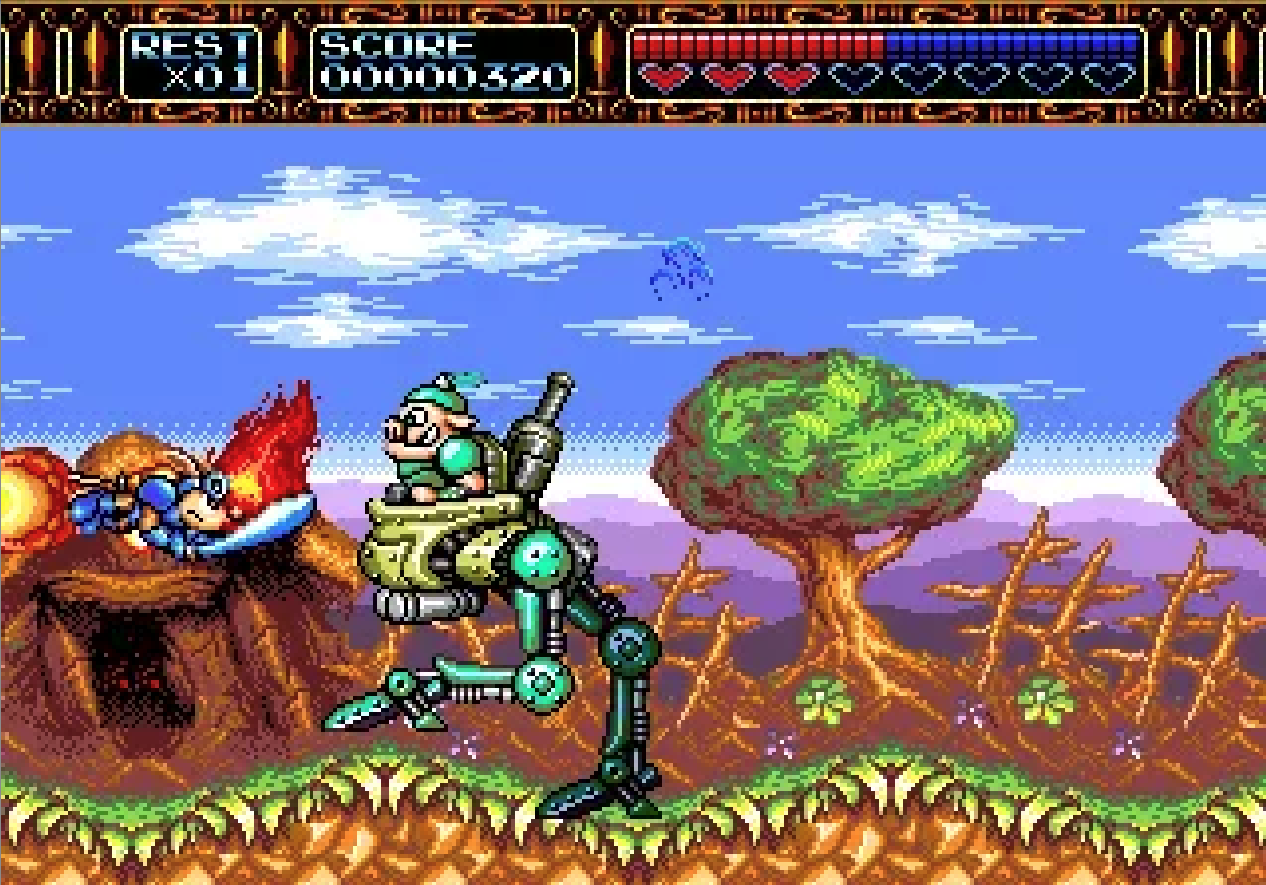 Then there’s the music, which is completely insane. Genesis music is a weird animal sometimes, but when folks nailed its usage, it could create some true masterpieces, and this game has plenty of them. Yes, some of the tunes don't necessarily fit the stages they’re placed in, but on the whole this soundtrack is absolutely top notch. It also features some of the best boss music I’ve ever heard.

Finally, those graphics. Some of these tricks were employed in Castlevania Bloodlines too, but there’s a stage with this jaw-dropping reflective lava in it, another where the whole screen distorts and fire comes shooting out everywhere, the whole thing is just full to the brim with incredible effects. The game is stunning, and it’s never left the Sega Genesis, not even in any sort of modern re-release.

A Base of Power

The Master System can’t really hold a candle to the NES in my mind, but it isn’t without merit as a console. In fact, it’s got some really awesome games on it. Before the Genesis came out, I had spent plenty of time with my uncle’s Master System and I came to really love the thing.

When the Super NES launched, as excited as I was to play all the new games, I was admittedly bummed that there was no kind of backwards compatibility. 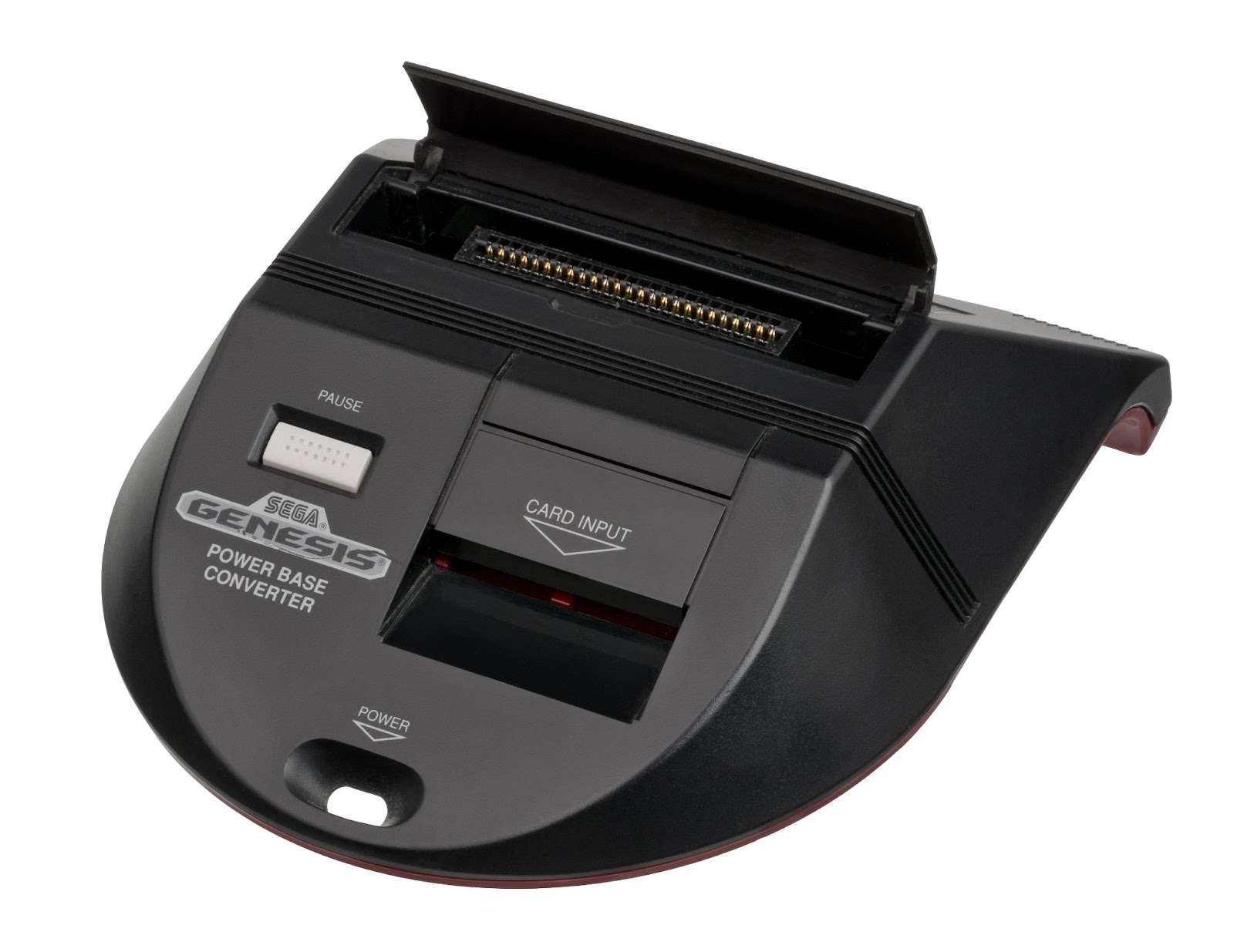 Sega, on the other hand, brought it to the Genesis. You could actually buy this weird monstrosity that allowed you to play Sega Master System games on your Sega Genesis console. Unreal!

I still loved my NES, but playing the thing had become a real hassle. The screen would blink, games would crash partway through playing, it was a mess. But if I were a Sega fan, I would have been able to pop all my old Master System carts and cards into my Genesis with ease.

The Super NES would eventually top this marvel with the Super Game Boy, but before that happened, I was jealous of the Power Base Converter for sure, even if it did have a rather silly name.

Genesis on the Go 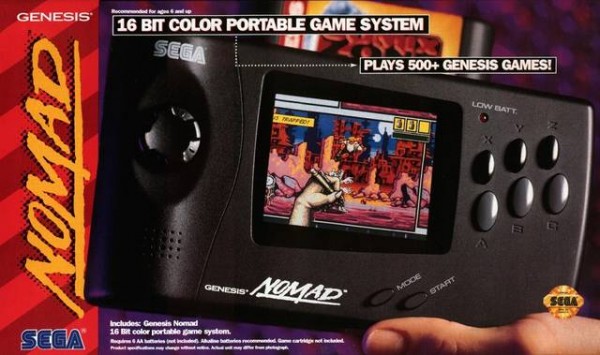 I remember playing Samurai Shodown on this thing at a friend’s house and being completely floored. There were absolutely no drawbacks. No sacrifices. It had a great d-pad and 6 face buttons so even games like Street Fighter II which were better on SNES now had a distinct Sega advantage. The thing even had a controller port for 2-player games and AV output so you could just use it as a Genesis if you wanted.

It’s crazy how much the Nomad has in common with the Switch, especially considering its age. Truly ahead of its time.

I will never get over just how incredible this game looks and sounds. I booted it up just last night on the Switch and I had to stop and marvel at its beauty.

Back when it came out, I played it at my friend Greg’s house and I couldn’t believe my eyes. It’s got such an incredible art style and its use of color is striking to say the least. And that music, wow! Like I said about Rocket Knight, I don’t usually like Genesis music all that much, but sometimes folks really managed to nail it and this is absolutely one of those cases. 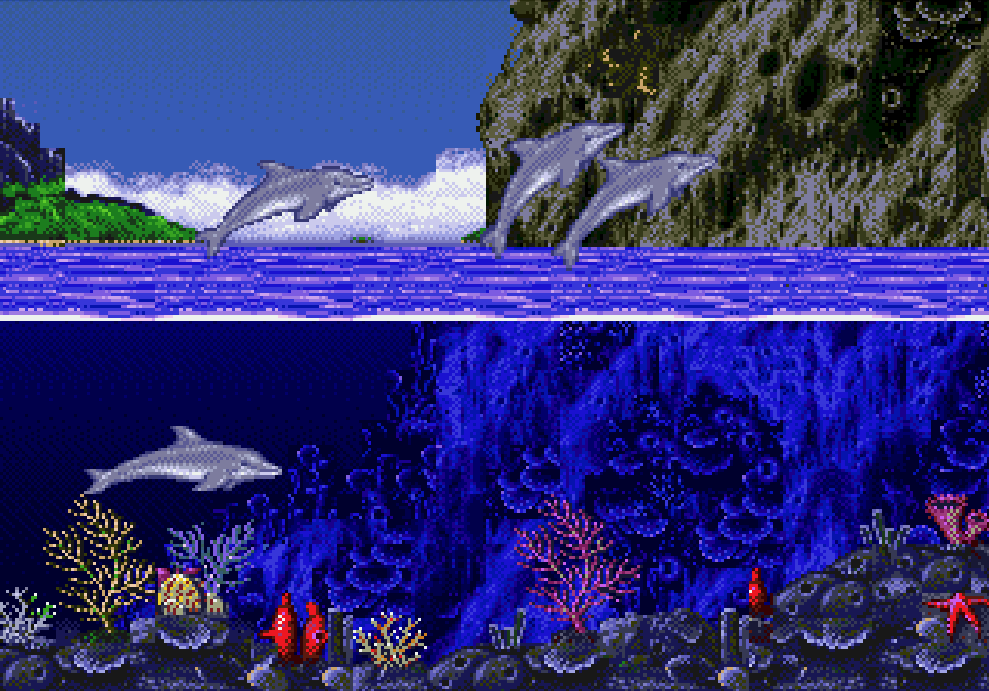 And to this day, there still isn’t really anything quite like it. Back in those days, there certainly wasn’t anything comparable on the SNES, that’s for sure. The islands in the background, the way the lighting gets darker the deeper into the ocean you go, the incredible sense of atmosphere the music created, it was a gaming experience like no other.

Of course the game itself is, let’s say flawed, and the story is completely bananas, but especially at the beginning before you realize just how crazy things are about to get, there’s this wonderful sense of mystery permeating the entire experience. I will always love this game, and it will always impress me.

Super Mario All-Stars was one of my favorite SNES games. I loved seeing my favorite NES games transformed into 16-bit adventures. The new graphics and sound applied to the pitch perfect gameplay of those classics just played to my sensibilities perfectly.

Then Sega launched The Sega Channel, which I’m not sure I still completely understand to this day, but I knew I wanted it as soon as I saw one of the games available exclusively on the service was Mega Man: The Wily Wars.

Here we had a Super Mario All-Stars style take on the first three Mega Man games with new content to boot. 16-bit Mega Man 1-3! I couldn't believe my eyes! 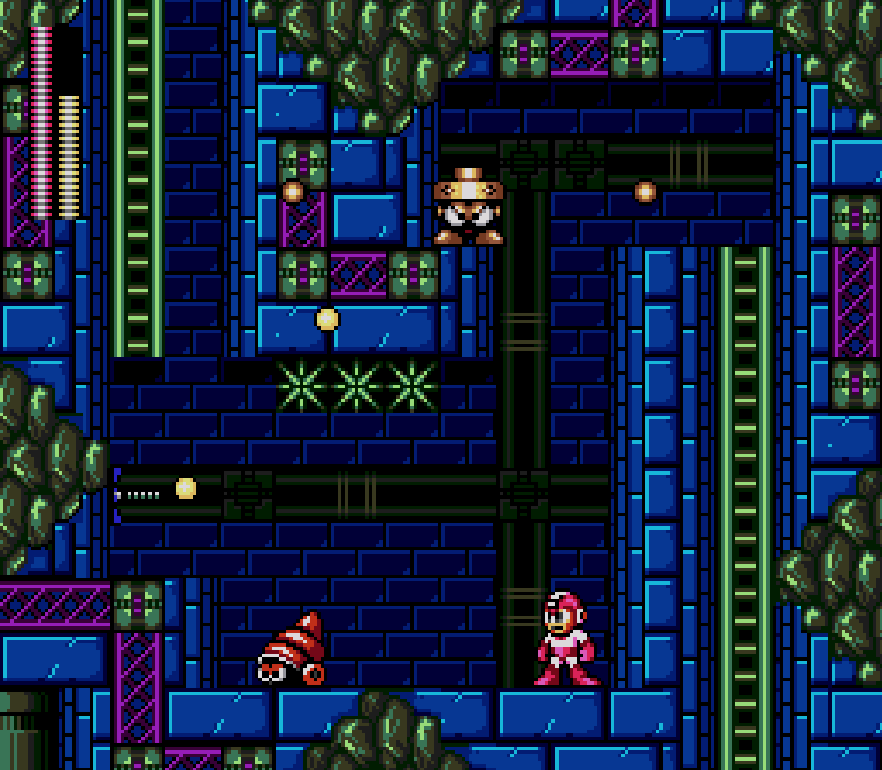 The more I looked into the Sega Channel, the more interested I became in the service as well. How cool would it have been to actually have that thing running in my house? As futuristic as the SNES was, the Sega Channel felt like a true leap forward, and while Nintendo did have a similar system running in Japan with the BSX Satellaview, I wouldn’t know about that for a very long time. The Sega Channel was very, very impressive.

That service coupled with Mega Man: The Wily Wars was infuriatingly cool. Having finally played Wily Wars thanks to the miracle of modern technology (and a Mega EverDrive) I can say that I would have flipped my lid back then, had I the chance to do so. It’s weird as heck and feels VERY different from its NES counterparts, but it’s a fascinating curiosity that I hope becomes more available in the future.

That should wrap this topic up, but I’d love to hear more from anyone out there reading this. What were the things that made you want a Sega Genesis? Or maybe you were the opposite and you secretly wanted SNES games? Let me know!