The Most Delicious Time of the Year

Thanksgiving is almost here, and as such, turkey has been on my mind a lot lately. But as video games are also often on my mind, I’m reminded that turkeys tend to show up an awful lot in the classics. Older video games have a habit of leaving loose bits of meat hanging out in unsuspecting places that restore health. It doesn’t really make a lick of sense, but it got me thinking, if I were to come across any of these meats on my own, would I eat them? I do love a good hunk of meat, but the circumstances surrounding its preparation and storage certainly play a role in how appetizing said meats are. Let’s take a look. 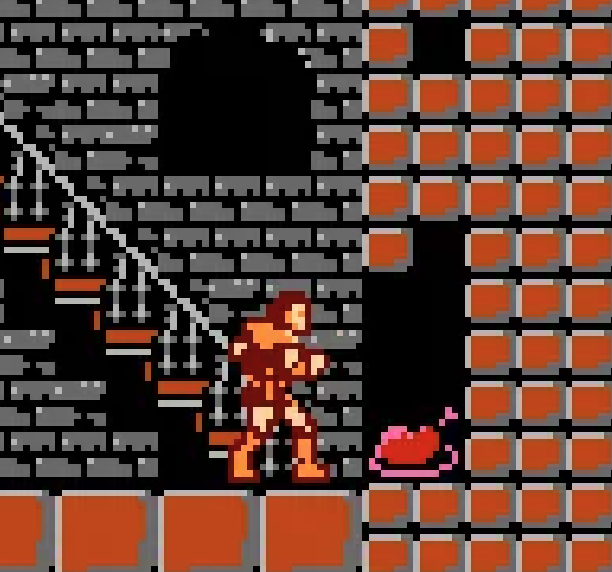 Probably the most famous of all the video game meats, wall meat from Castlevania has a lot going for it. A wise man once said “hunger is the best spice” and that goes a long way in Castlevania. This game is tough, and these meatwads are a hot commodity especially in the later stages. Still, I have no idea what kind of meat this actually is. I’ve seen it referred to as a pork chop before, and if that’s the case its bright red color certainly makes it a dangerous meal regardless of its instant gratification. Eating raw pork is rarely what I’d consider a good idea. But let’s assume it’s turkey or beef, that color still leaves a lot of questions. It doesn’t look so much like raw beef as something that’s blood soaked, and eww.

I do have to give it points for presentation though. Considering that this stuff is literally hidden in the walls, it’s not a bad-looking meal. How exactly it manages to stay on the plate when being broken out of what looks to be a stone wall there is beyond me, which implies a degree of magic is involved. Magic or no though, I think this one is going to have to be a hard pass from me.

Would I eat it? Absolutely not.

Even if the meat itself isn’t tainted on its own, it’s got to be covered in chunks of wall at this point. And do we really think Dracula’s castle is up to code? There’s probably all sorts of asbestos in there. No thank you.

Pocket meat from Castlevania: Symphony of the Night 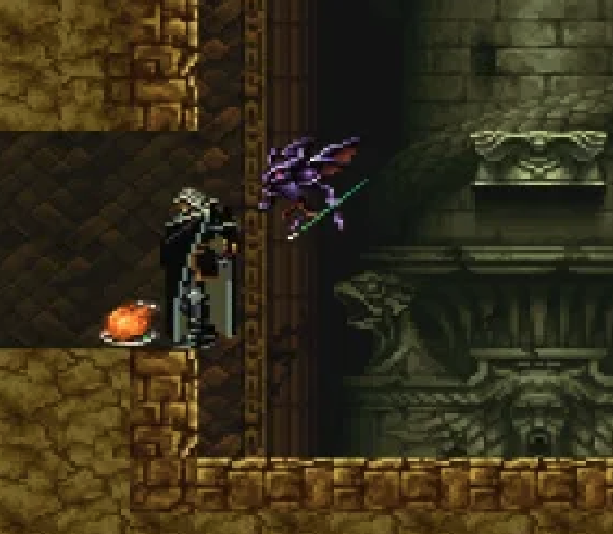 Sticking with the Castlevania motif, let’s look at Alucard’s pocket meat from Symphony of the Night. This is regularly found in the same manner as the original game’s wall meat, buried in various walls in Dracula’s Castle. The big difference here is its apparent sanitizing agents at work. This meat doesn’t just sit in the walls. You can actually take this fully cooked, delicious looking turkey or pot roast or what have you and KEEP IT IN YOUR POCKET FOR LATER. It isn’t the same gross blood red color, it’s still on a plate with a touch of green which says to me there might even be some small portion of vegetables involved here, and it’s portable!

Would I eat it? Heck yes.

I’m a sucker for convenience, and the ability to keep a fully cooked turkey dinner in my pocket safely and securely is a pretty big selling point. I imagine whatever magic at work here is just good enough for me to not think about how horrible this stuff actually is. 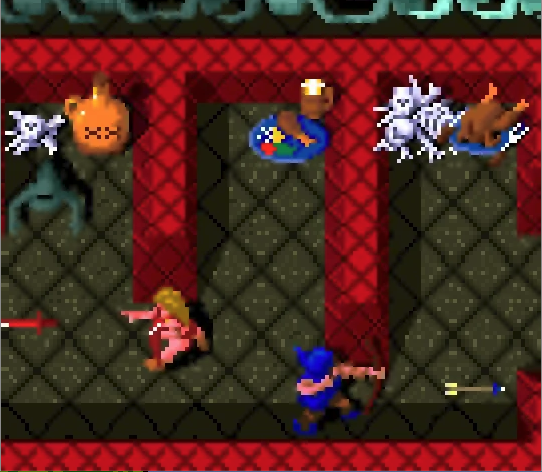 This is another tough one. In Gauntlet 2 in particular, there isn't just a whole oven-roasted turkey laying around, but a plate of food with turkey and… I have no idea what else. Wash it down with a tall glass of XX and you have yourself the makings of a lovely meal. However, this has been sitting out for who knows how long. Unlike wall meat that has at least a degree of insulation involved from being either in a wall or your own pocket, this stuff is just kind of sitting out. And not on a table! It’s just there on the floor. Next to A PILE OF CORPSES!

Would I eat it? Absolutely not.

Okay, “absolutely” might be harsh because who knows what I’d do if I had just killed an army of ghosts and stuff? I could theoretically become hungry enough to eat this, but fancy blue plates just aren’t enough for me to trust it, even under these circumstances. 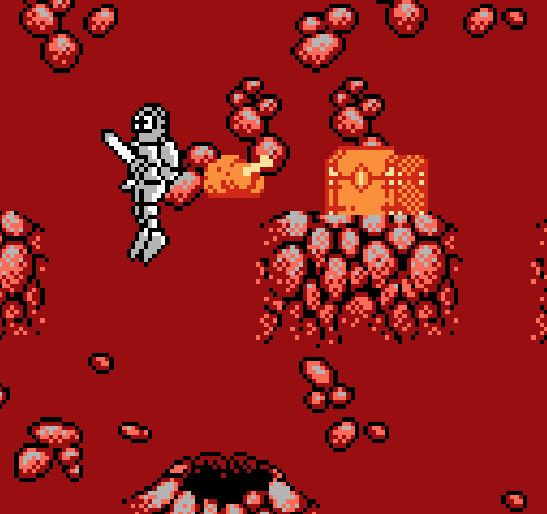 Meat in Iron Sword shows up in a couple of locations, but at least two of them are mountains, which gives me a degree of confidence. The first stage has this meat laying around on a freezing cold mountain. Refrigeration! It also isn’t on a plate or anything. This is just magically cooked and prepared meat laying about. I appreciate that level of brazenness. I don’t know who put it there, but I respect it.

There’s also that same meat laying around on a volcano. Surely it’s fully cooked enough to have gotten rid of any nasty bacteria and such on the side of a freaking volcano, right?

But the biggest selling point for this meat is that it’s regularly sold in stores. If the shopkeeper is willing to put a price tag on this very same mystery meat and sell it to his customers, I say it’s good enough for me. This guy’s shops have no signage, and are found in completely insane locations. I refuse to believe this guy can stay in business like this if his wares aren’t absolutely top notch.

Would I eat it? No question.

I don’t know why it looks as delicious as it does, but that’s some tasty-looking meat. It even often defies the laws of gravity. Gravity defying free mountain meat? That’s my kind of stupid.

Trash can meat from Final Fight 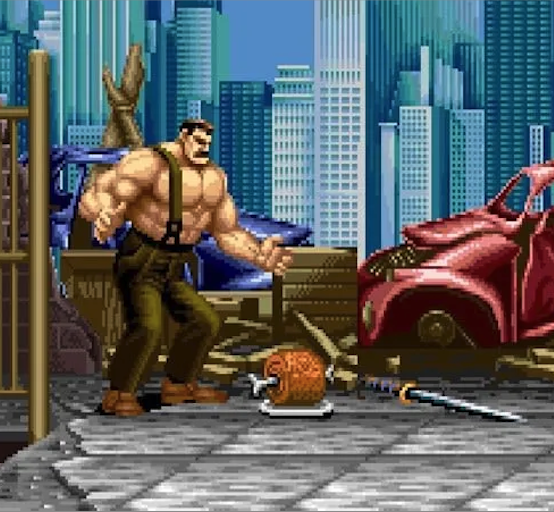 Look at this majestic hunk of flesh right here. And he’s staring right at a delicious piece of meat he just busted out of a trash can! This is a tough one because when it comes to presentation, this is a real winner. The fact that it can more than occasionally be found in the same trash can as a fully functional sword is a bonus too. Using a sword to chop up meat is a little over the top, but as the old saying goes, there’s no kill like overkill!

It looks fantastic, but perhaps a bit too good to be true. Of course, this is the same game where you get a full health refill from eating another guy’s chewed gum, so who knows? Maybe it’s the best meat ever. I still think I’d keep walking.

Mysterious meat from The Secret of Monkey Island 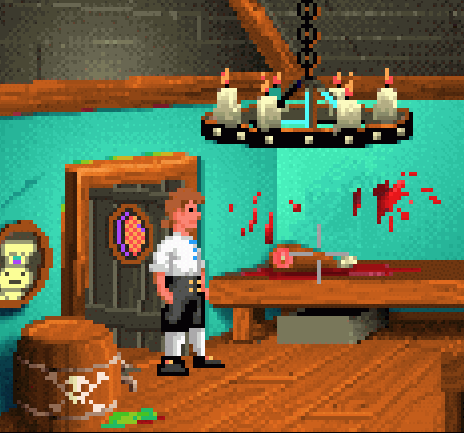 When you come across this… thing, Guybrush says “It’s some sort of meat or meatlike substance.” If you can’t even tell if it’s actually meat by looking at it, I’m not sure this would be a good idea to ingest.

However, you can cook it. And when you cook it, it turns brown. Just like real meat! The stewed meat only takes a few seconds to become cooked, but it is cooked, and that’s not nothing. It’s also found in an actual kitchen, which is more than I can say for all of the other meats on this list.

Would I eat it? I’d think about it.

This would really all come down to the smell test for me. If I stewed the meat and it still smelled funky, I’d pass. It it smelled delicious, I’d go for it. It does look nice, after all.

“Food” from The Legend of Zelda 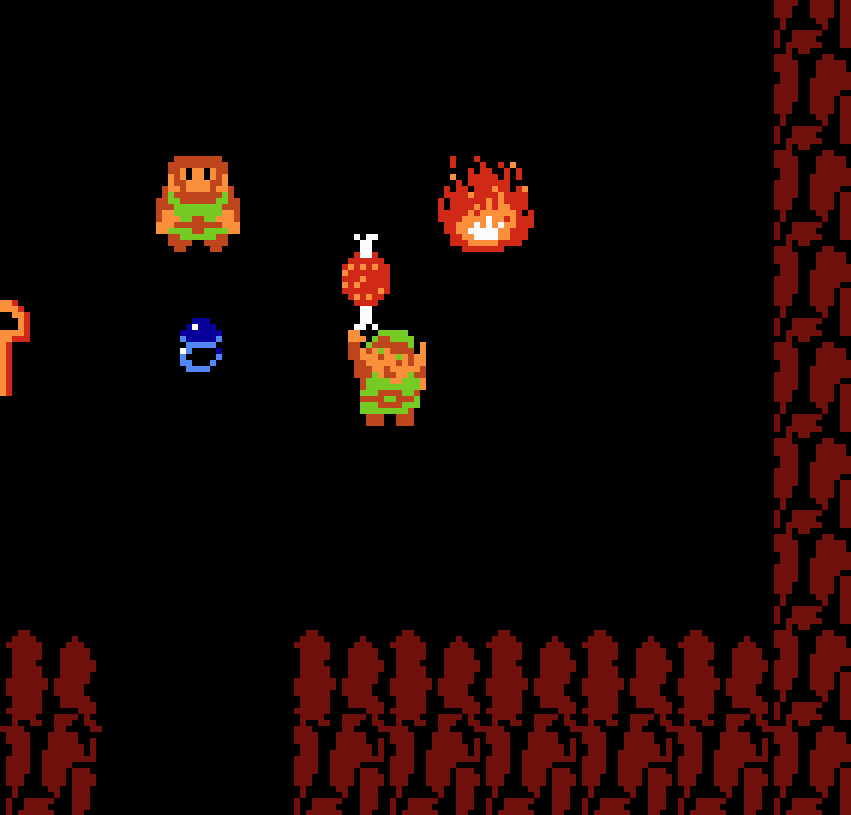 What is it? I don’t know. And you know what? I don’t care. This dude is selling it off the floor of his cave shop, and it looks delicious. What kind of meat even sits on a bone like that? Scratch that. I don’t care. I would eat the heck out of this stuff.

Would I eat it? You bet your green tunic I would.

Ever since I was a kid I’ve wondered what this meat tastes like. Octorocks seem to love it, and Link can carry it around in his pocket. But the biggest win here is that it’s infinitely replenishable! You can slap some meat on the ground, walk away, then wipe out another meat hunk a few feet away with no repercussions. Infinite dinner? Even if it doesn’t taste great, that’s a hard value proposition to turn down.

Well, that’s how I feel about various video game meats. (This is easily one of the stupidest things I’ve ever written, so thanks for sticking around). What about you? Is there any classic video game meat that you’d proudly put on your Thanksgiving Day dinner table? Let us know!

Have a happy and safe holiday, everyone!