Use Your PS4 Controller on You Sega Genesis

The PS4 controller is often considered one of the best ever made. It strikes a perfect balance between form and function, and has earned its reputation as one of the finest controller options out there. Similar things can be said about Sega’s legendary Genesis console. Easily one of the most beloved retro game systems out there, the Sega Genesis/Mega Drive is home to a fantastic game library that’s just as fun now as it was in the 90s. Playing those games today on their original hardware can be a bit of a chore though, especially in terms of controllers. The original Sega Genesis controllers only had 3 face buttons and incredibly short cables. Later games on the system supported the more modern 6-button controller, but even those still required the managing of pesky wires that can easily be tripped over, especially when sitting back on your couch to play on your modern HDTV.

So then, what can you do? Wouldn’t it be great if you could use your wireless PlayStation 4 controller on your Sega Genesis? You wouldn’t be the first person to ask that question, and thankfully there’s an answer. With the Brook Super Converter Sega Genesis controller adapter, you can! 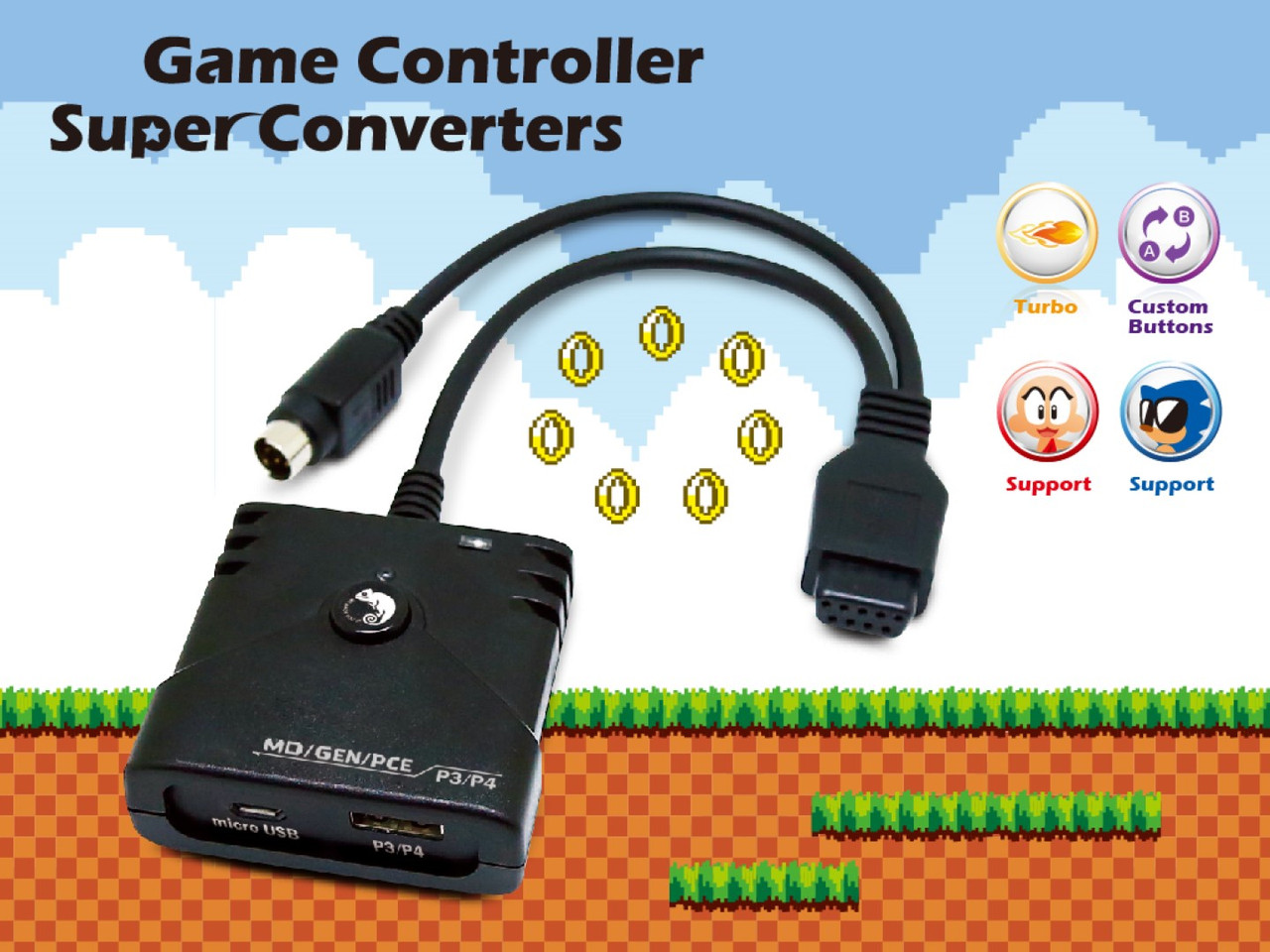 What will I need?

The next thing you should have is the Brook Super Converter. This is how your modern controller is going to communicate with your retro Sega hardware. That can be purchased here:  https://sag.rocks/3CTjpLk

Finally, you’ll need the actual Sega Genesis or Mega Drive console, which is where things can get a little more complicated. There were several iterations of the Sega Genesis as well as various add-on hardware options like the Sega CD, Sega 32X, and Power Base Converter. Fortunately in this instance, all revisions of the Sega Genesis are compatible with the Brook Super Converter, so no matter which version of the platform you have, you shouldn’t have any issues connecting your PS3 or PS4 controller to it. That includes the Sega Nomad and Sega CDX units as well. That said, if you’re dusting your Sega Genesis system off for the first time in a long time, you might find that connecting it to a modern TV is a bit more difficult than it was back in the 90s.

Most modern TVs no longer have an RF or standard yellow, white, and red AV connection available. The good news here is that a number of options exist to help connect your old systems directly to your new television with little to no fuss. The simplest option is the LevelHike HD Cable. This plugs directly into your Sega Genesis console and allows you to use any standard HDMI cable to connect to your TV. If you’re looking for a higher quality picture, you might want to also consider something like the RetroTink 2X Pro. Either choice should get your Sega Genesis displaying on your new TV with ease.

Other components like power cables can also be purchased at Stone Age Gamer.

How does it work?

Now that you have all the necessary parts, it’s time to get your gaming setup up and running.

This Sega Genesis controller adapter is pretty simple, and requires little more than “plug and play.”

It really is that simple. Once your controller is paired with the Super Converter, you’re good to go.

What about using it on my PC? 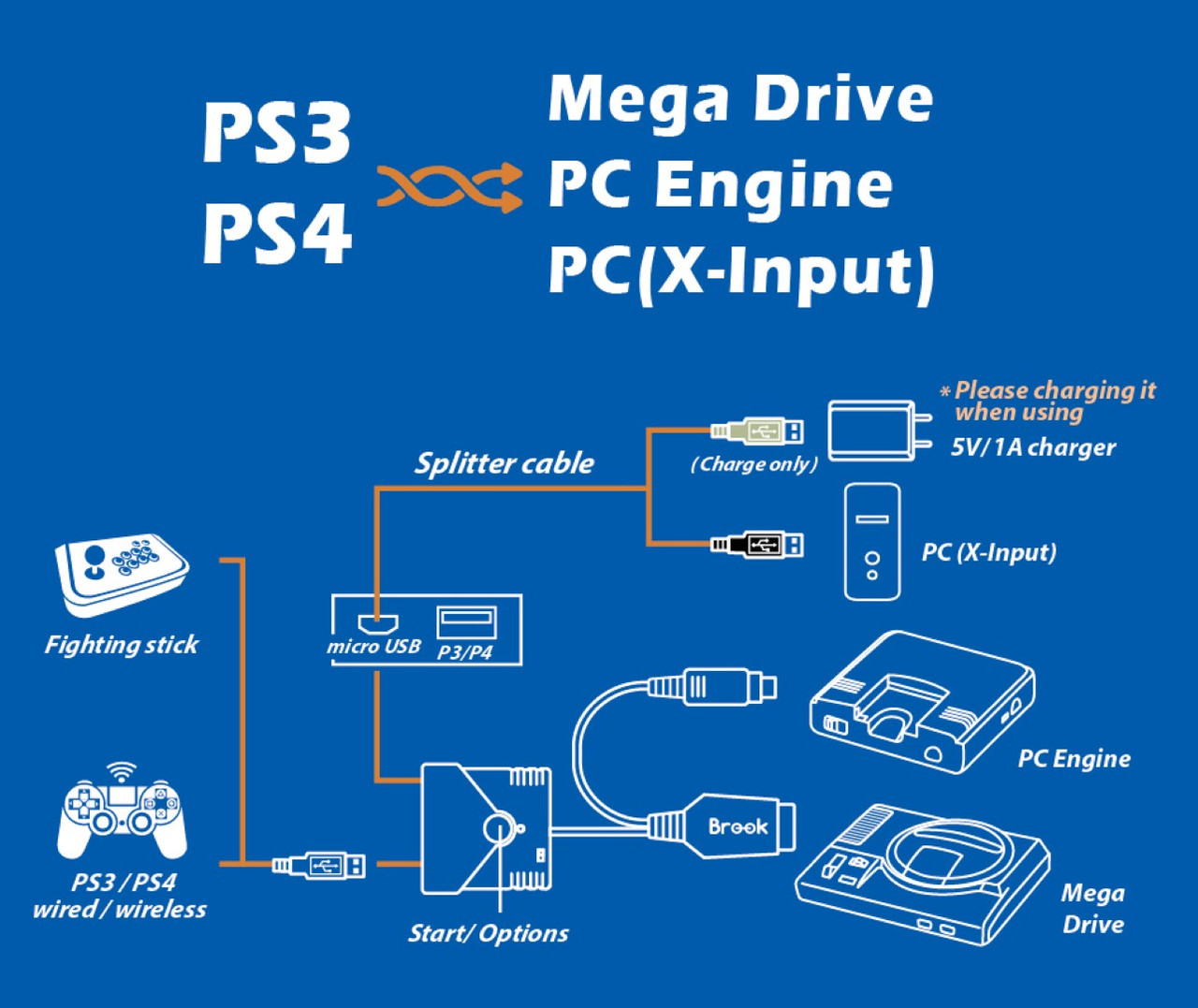 What else does it do?

Do you have a PC Engine? The Brook Super Converter can also be connected to the PC Engine with the same functionality as the Mega Drive/Genesis. What about fight sticks? Absolutely! The Super Converter can also be used as a fight stick converter. Connecting a PS3/PS4 compatible wireless fight stick works exactly the same way as connecting a PS3/PS4 controller, so you can play all your favorite 16-bit fighters with arcade accuracy.

Plus, with the latest firmware update, the Brook Super Converter can be paired with a Nintendo Switch Pro Controller as well, so if you prefer that to a PS4 controller, that’s now an option too!

What about other game platforms?

While this specific Super Converter is only for the Sega Genesis, Mega Drive, PC Engine, and PC, Brook actually offers a number of other Super Converters for various other platforms including PlayStation 2, Neo-Geo, Xbox One, Wii, and more. We carry many of them on our site.

If you want to get the most out of your Sega Genesis system, the Super Converter from Brook is the way to go. It offers all the comfort and freedom of a modern PlayStation controller with the authentic Sega Genesis experience. Welcome to the Next Level. Grab yours here: https://sag.rocks/3CTjpLk