I think I missed the boat on the original Zaxxon. It probably has a lot to do with when I actually got around to playing it. From what I’ve gathered, it was the game’s isometric 3D perspective that really made it special in the first place, but I didn’t come across a Zaxxon cabinet until well into the NES’s life cycle. Having already spent countless hours with games like RC Pro Am, Snake Rattle n’ Roll, Marble Madness, and Cobra Triangle, playing things from this perspective wasn’t exactly anything new to me. Don’t get me wrong, the game’s fun, but I didn’t leave my experience with it ultimately impressed.

With this in mind, it makes sense that I didn’t go into playing the board game adaptation with an abundance of excitement. 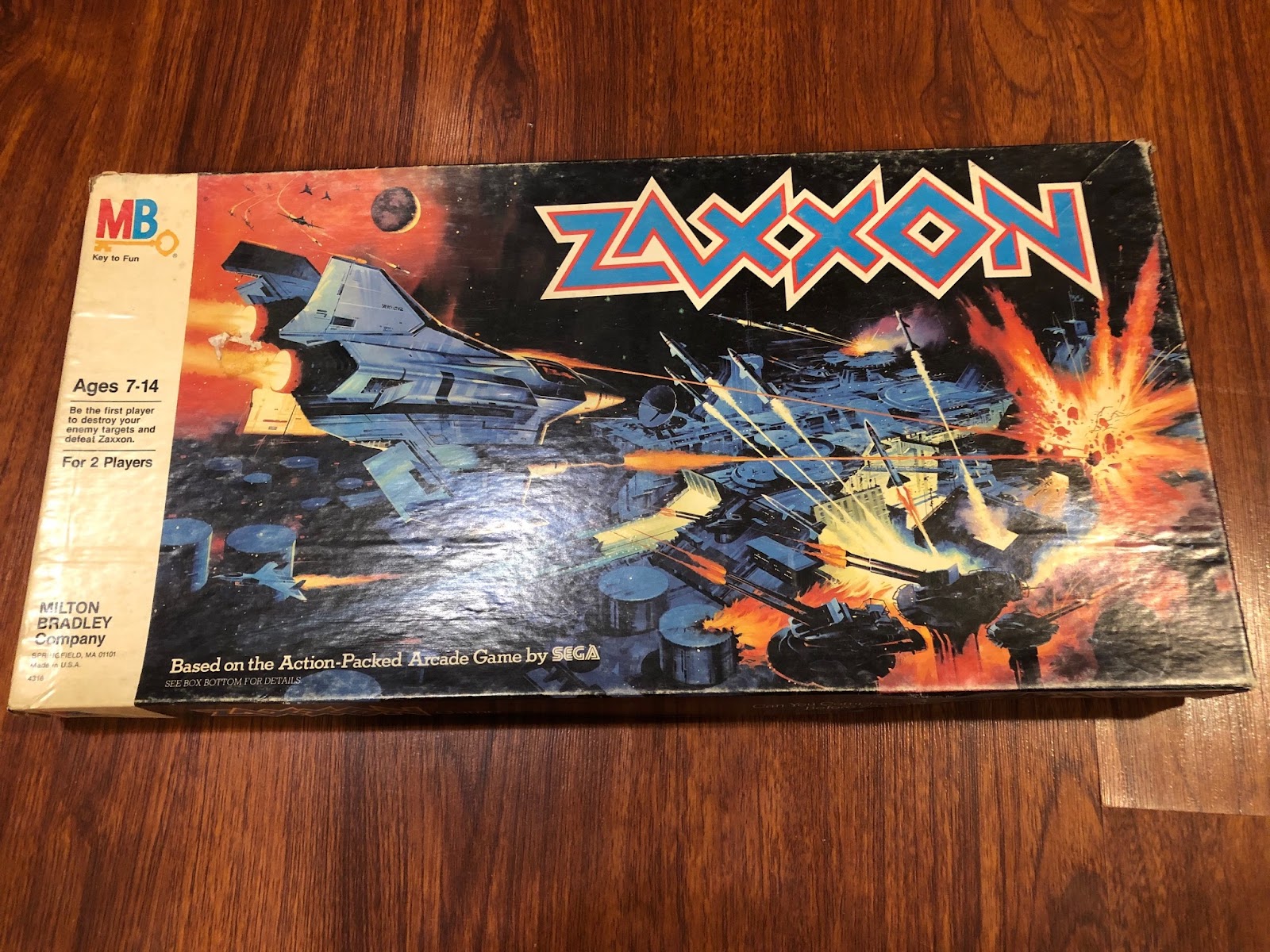 I thought Centipede was an odd choice for board game adaptation, but Zaxxon is way weirder. At least Centipede took place on a single screen. Zaxxon is a scrolling shooter about flying over and under things. The question isn’t so much how they adapted that into a board game, but why someone thought it was necessary. I don’t think Zaxxon was ever one of those household name-level popular arcade titles, but what do I know? I still haven’t figured out why this game exists, but how they made it work is actually pretty impressive.

Zaxxon is easily the most complicated game in my collection, which really put me off when I first opened it. As I mentioned in previous posts, I’ve been going through these games with my 5 year old son, so a super-complex game with lots of small pieces and rules isn’t exactly my idea of a good time with the boy. When I opened the box and saw the giant honeycomb pattern all over the game board, my heart sank. Getting through this one wasn’t going to be easy.

My instincts were exactly right, because the further I got into the box, the more little plastic pieces I found. There’s fuel cells, gun turrets, a big ol’ computer, walls, and more. I can’t say I remember the rules of this one in exact detail because we didn’t spend a ton of time learning them. There’s obviously a lot going on in the game, so we more or less played a simplified version that allowed him to have fun moving his ship. So with that in mind, here’s how it seems to go. 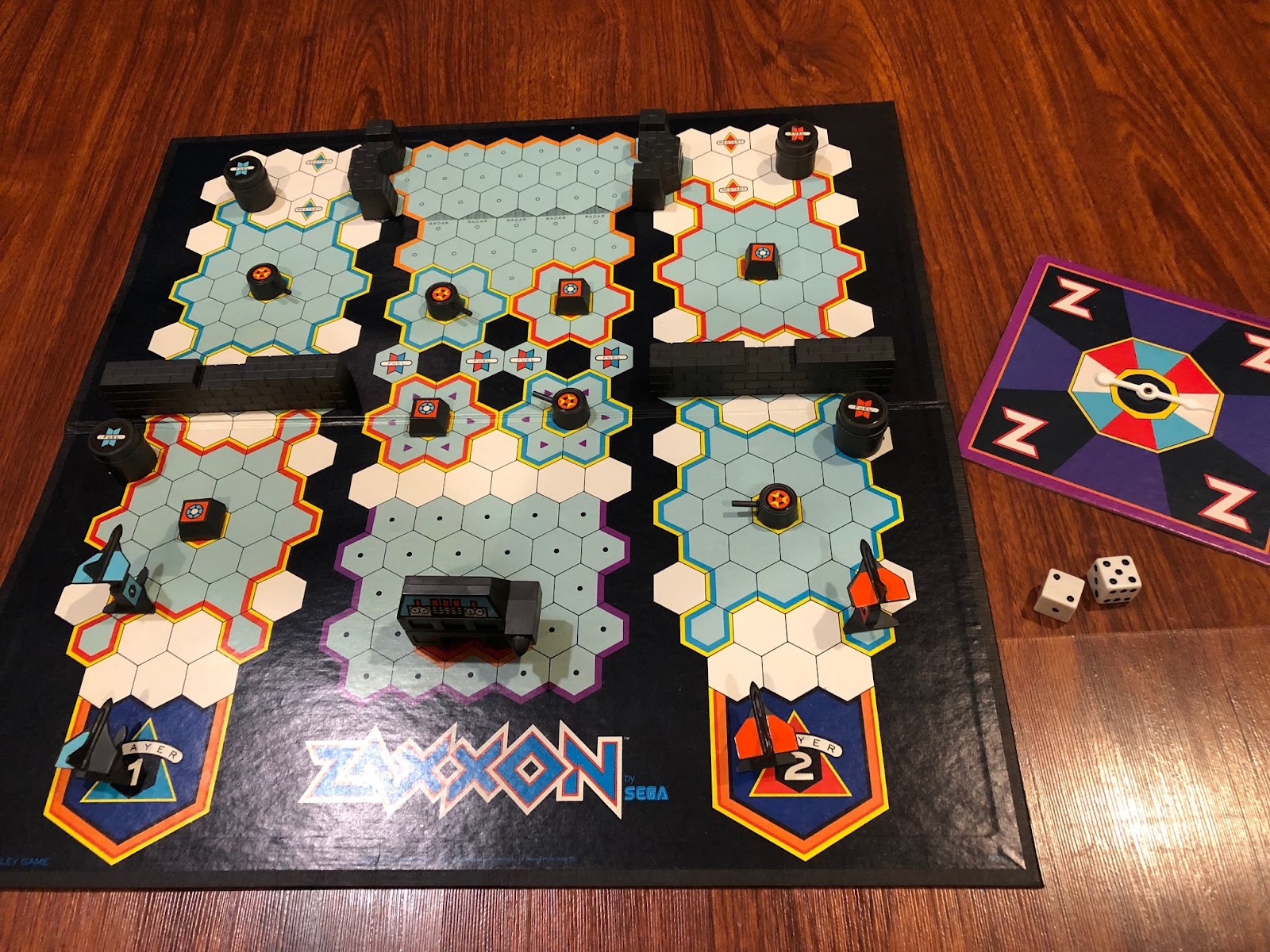 Two players have two ships each on opposite sides of the game board. Each player takes turns moving one of their ships after rolling the dice and spinning the Zaxxon spinner thingy. I believe the dice determine how your ship’s movements and the spinner dictates how the game moves. More on that in a bit. Your ships are allowed to travel freely around the board, but there are some barriers in the way that must be overcome before moving on. How you do this is by either shooting them or flying past them without getting shot down. The different colored zones on the board indicate what kind of danger you’re in. The plain white spaces are safe, and the blue ones with the different colored borders mean you’re probably getting shot at. Say you’re in an area with a missile silo, and the spinner lands on red. That means you get shot down and have to return to your starting point. If you’re in a blue zone with a gun turret and the spinner lands on blue, you’re shot down. Pretty simple, really. You basically want to hope you don’t spin the same color as the area you’re in or you get shot down. Or you can hope to spin a white, because that leaves everyone safe. 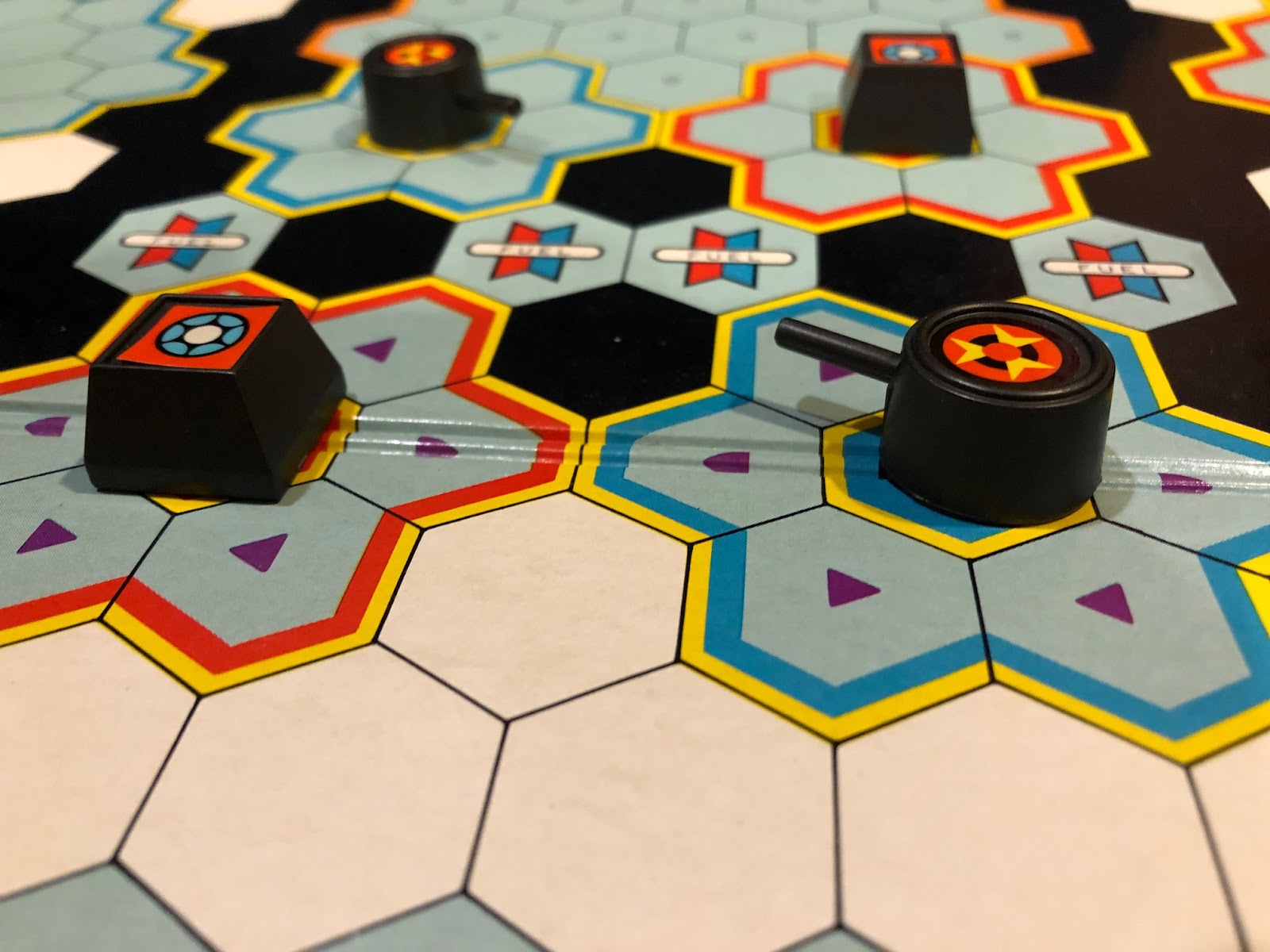 The way the dice work are a little weird. Instead of telling you how many spaces you can move, they instead tell you how many moves you can make. Shooting one space costs you one move, so if there’s something you want to move 4 spaces away, that costs you 4 moves. Moving your ship one space in any direction costs you one move. And most relevant to the arcade game, changing altitude costs you one move. So it’s all about movement management, and I have to admit, the altitude aspect really impressed me. The arcade game had a lot to do with changing altitude to do certain things like shoot stuff and fly over walls, and the way they incorporated that into this game is pretty clever. 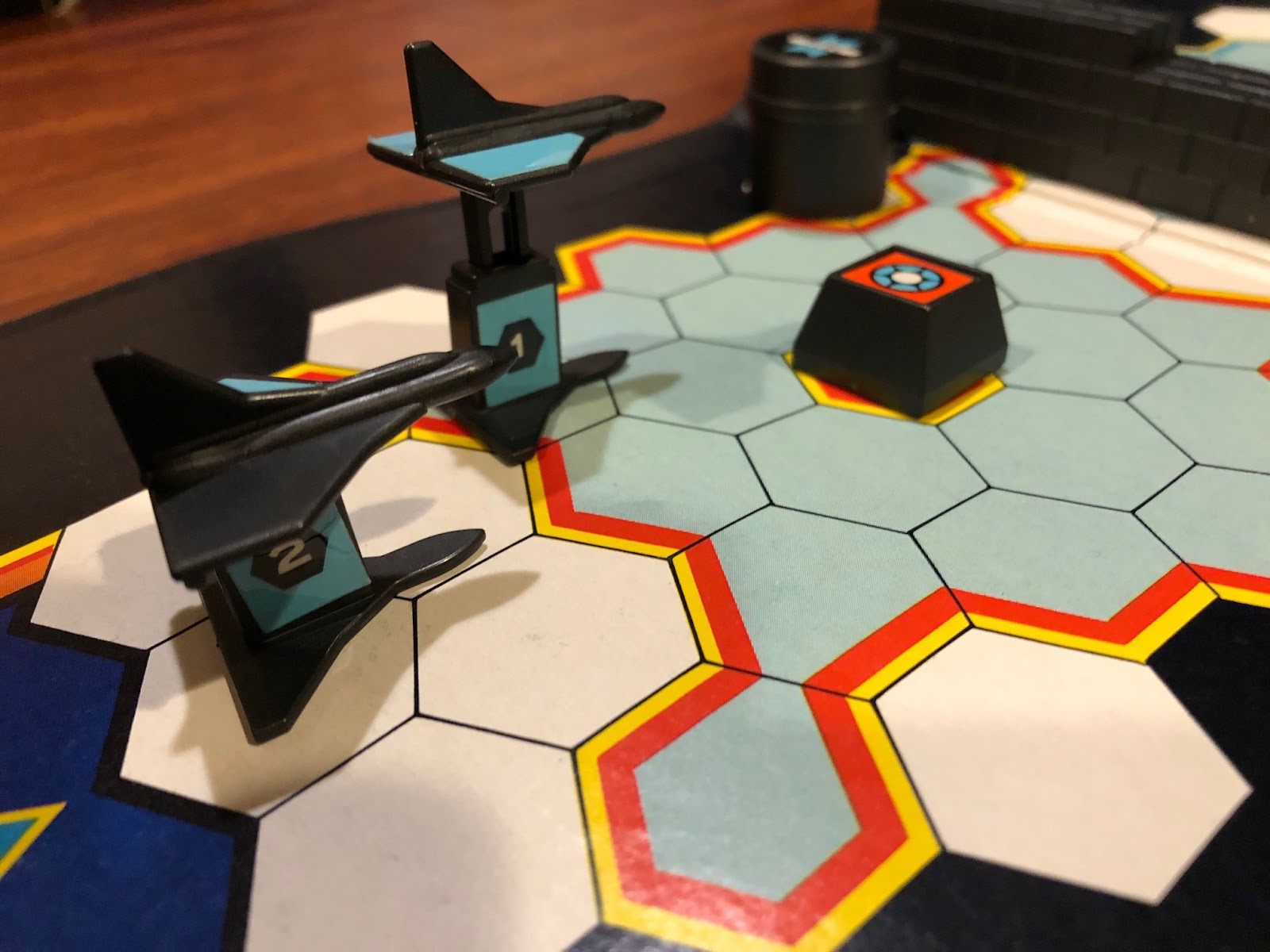 The ship pieces are on these little stands that allow your ship to fly at two different altitudes. In order to shoot targets, you have to be at low altitude. To fly over walls, you have to be at high altitude. It’s a little touch, but it really helps make this weird little game feel a little more like Zaxxon.

Anyway, once you’ve made it past the first run of missile silos and gun turrets, you get to what the game refers to as the Inner Fortress. At the top of the area is a place where the two players can shoot each other down if they want. That seemed fun, but I didn’t feel like explaining that to my son, so we more or less ignored it. But basically, you can choose to attack the other player the same way you attack gun turrets and such. Once you get past that, you have a few more turrets and silos to go through, and finally you get to the big computer Zaxxon. I had no idea the game was named after a flying computer. Learn something new every day, I suppose. I’ll admit I’m still a little fuzzy on the particulars of this part of the game, but if I understand it right, once someone has gotten to the area covered by Zaxxon’s radar, the spinner now also controls Zaxxon’s movements. The thing can fly all around its designated area and shoot down your ships so you have to start over again. I can’t say I’ve ever played a board game with a final boss before, but it’s actually kind of a cool concept.

There’s a whole bit with fuel tanks too, but I can’t for the life of me remember what the heck they do, and I’m not going to lie, I don't feel like looking it up. They don’t really have much of a bearing on my overall feelings on the game anyway, so just know that they’re there, and that they do something. 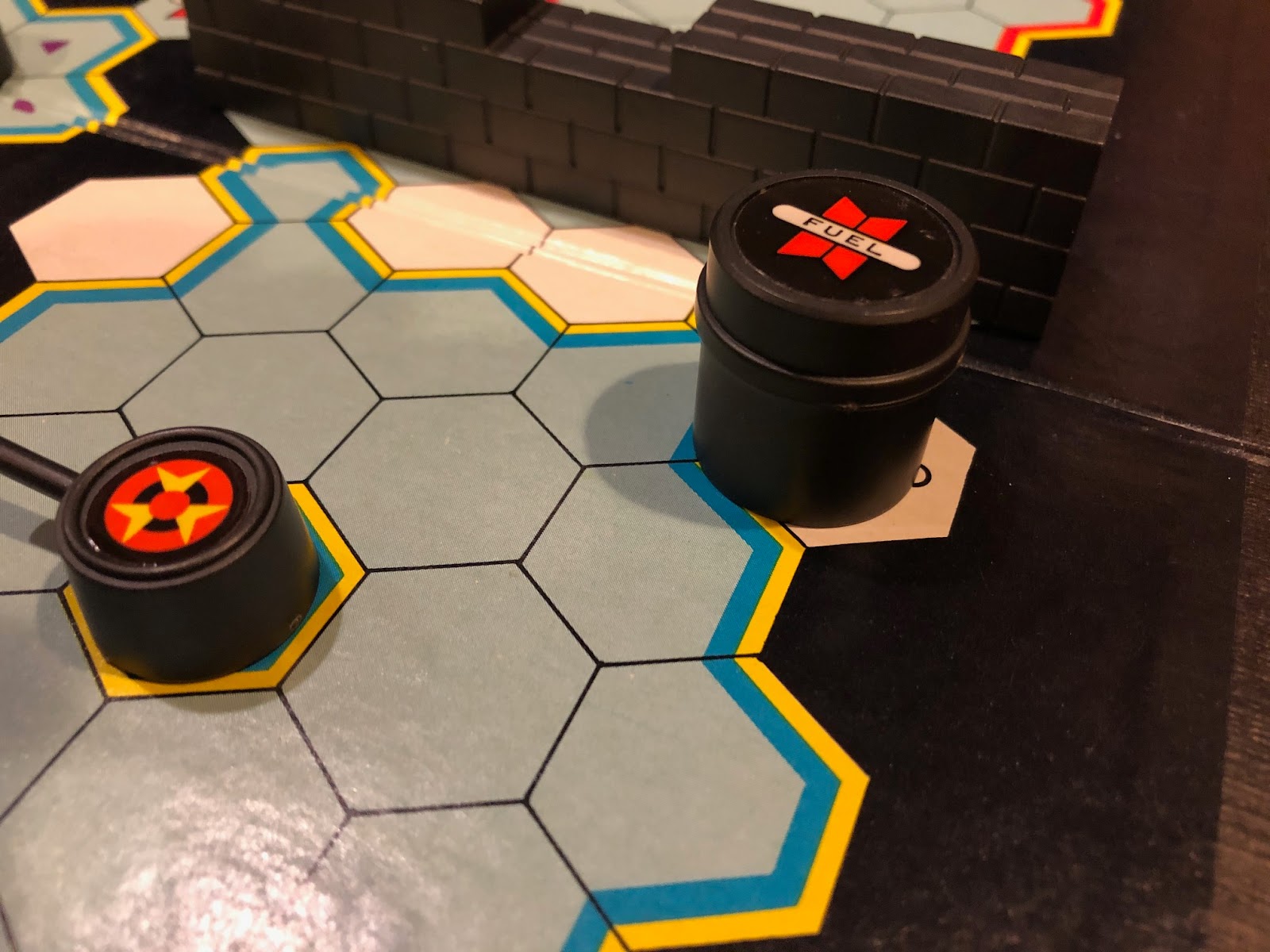 Honestly, this game is kinda nuts, but I imagine if you’ve got two non-small children together to play it, there’s the potential to have a lot of fun. Not having much of an attachment to the source material, I’m sure a lot of the game’s charm is lost on me, but I can definitely appreciate how much effort went into making it. That has to count for something, right?

I doubt I’ll be attempting to play this game again until my son is a few years older. He’s moved on to other games anyway. But I’m still glad I have it. It’s a very curious piece of video game history, and I do love weird stuff.

Next time, I’ll be diving into the first of two NES game adaptations I have, and they’re both pretty fun to play. In the meantime, have you ever played Zaxxon? What are your thoughts on this game?