With Super Mario 3D All-Stars out in the world, a lot of people are rediscovering their love for Nintendo 64 games. It was a major turning point in Nintendo’s history, that’s for sure, but it’s well loved for a reason. This generation was the birth of 3D gaming, and it’s not hard to argue that the Nintendo 64 was the pioneer in 3D movement with their revolutionary, if a bit weird, controller.

The Nintendo 64 was the first mainstream home console to include a controller with an analog stick right out of the box. Coupled with the amazing free movement of Super Mario 64, the N64 felt like it was the true future of gaming way more than its competitors at the time. Of course, that didn’t really turn out to be the case, and while the Nintendo 64 was ultimately a successful machine, its competitors (specifically the PlayStation) had more than a few things to say about shaping the future of the gaming industry.

That doesn’t take anything away from the Nintendo 64’s controller though, which is what we’re here to focus on today. When it was first shown off, people like myself were rightfully mystified. It looked completely insane, but also completely fascinating. At first glance, it seems to be designed for people with three hands, and even when you figure out how it’s supposed to be held, it’s never exactly been a beacon of comfort. 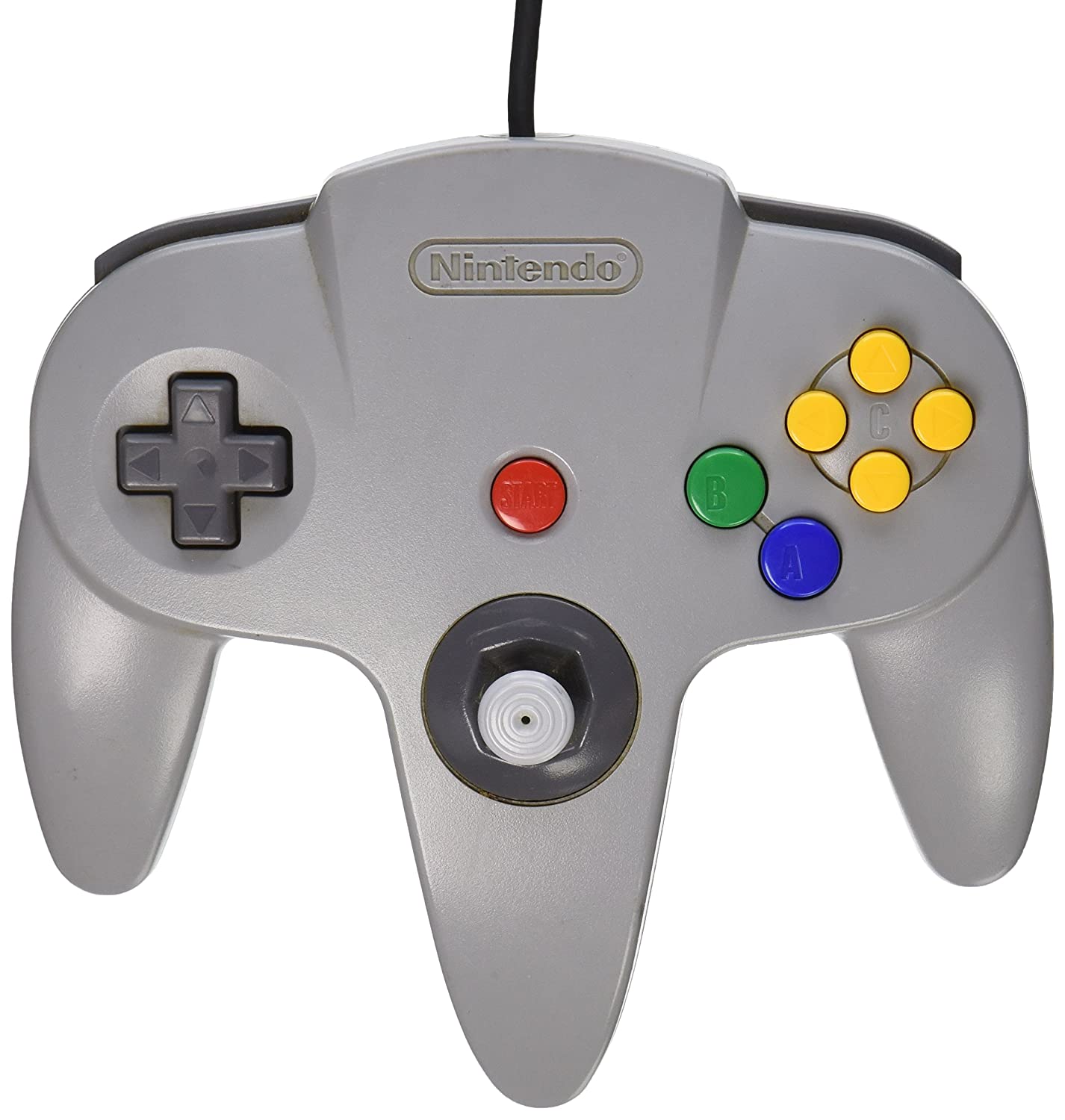 Our friends at Retro Fighters have a solution, though. It’s a bit late to the party, having only released a few years ago, but it’s simple, elegant, and just about everything you’ve ever wanted your Nintendo 64 controller to be. It's called the Brawler64, and it's pretty gosh darn cool. If you want to have a look at it, here's where you can get it.

It’s been years since the Nintendo 64 launched, and 3rd parties have been trying to perfect Nintendo 64 controls from day one. Early 3rd party controllers were typically a bit of a mess. Weirdly shaped experiments like the Thrustmaster littered FuncoLand shelves for ages, collecting dust while waiting for the next poor soul to decide saving a few bucks was worth holding something so weird.

There was one controller in particular that caught my eye back in the old days. The Super Pad 64 from InterAct. This thing had the brilliant idea to ditch the trident design and take a swing at fitting the D-pad and analog stick on a more standard shaped controller. 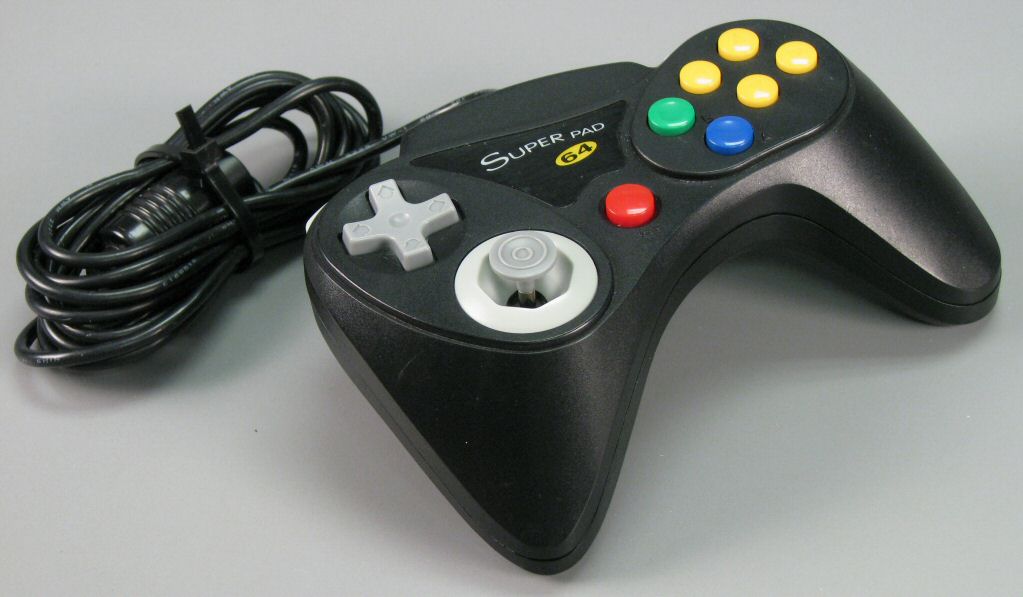 It wasn’t perfect, but I remember being really impressed by this thing. It was a step in the right direction. Unfortunately, the D-pad was kinda crappy, and the left side of the controller was way too bulky.

Enter the Brawler64 from Retro Fighters. This thing is a beauty.

Unlike Nintendo’s controller, the Brawler 64 is shaped like the standard controllers of today. As such, it’s much more comfortable to hold than any other Nintendo 64 controller I’ve ever used. Your fingers naturally fit in all the grooves and on the shoulder buttons, and the giant expansion slot doesn’t get in the way at all. It’s got a pretty nice weight to it too. Even with an Expansion pak plugged it, the controller isn’t too light or too heavy. It’s just right.

If there’s a drawback to this shape, it’s that controllers that look like this come with a certain degree of muscle memory these days. While I was playing with the thing, I kept reaching for a second analog stick that wasn’t there. Granted, that’s hardly the controller’s fault, but it’s a weird little hurdle I had to overcome. Maybe having a second stick that was mapped to the yellow buttons could have been implemented, but that may have left things a little crowded. Not a dealbreaker in the least, but something worth noting. 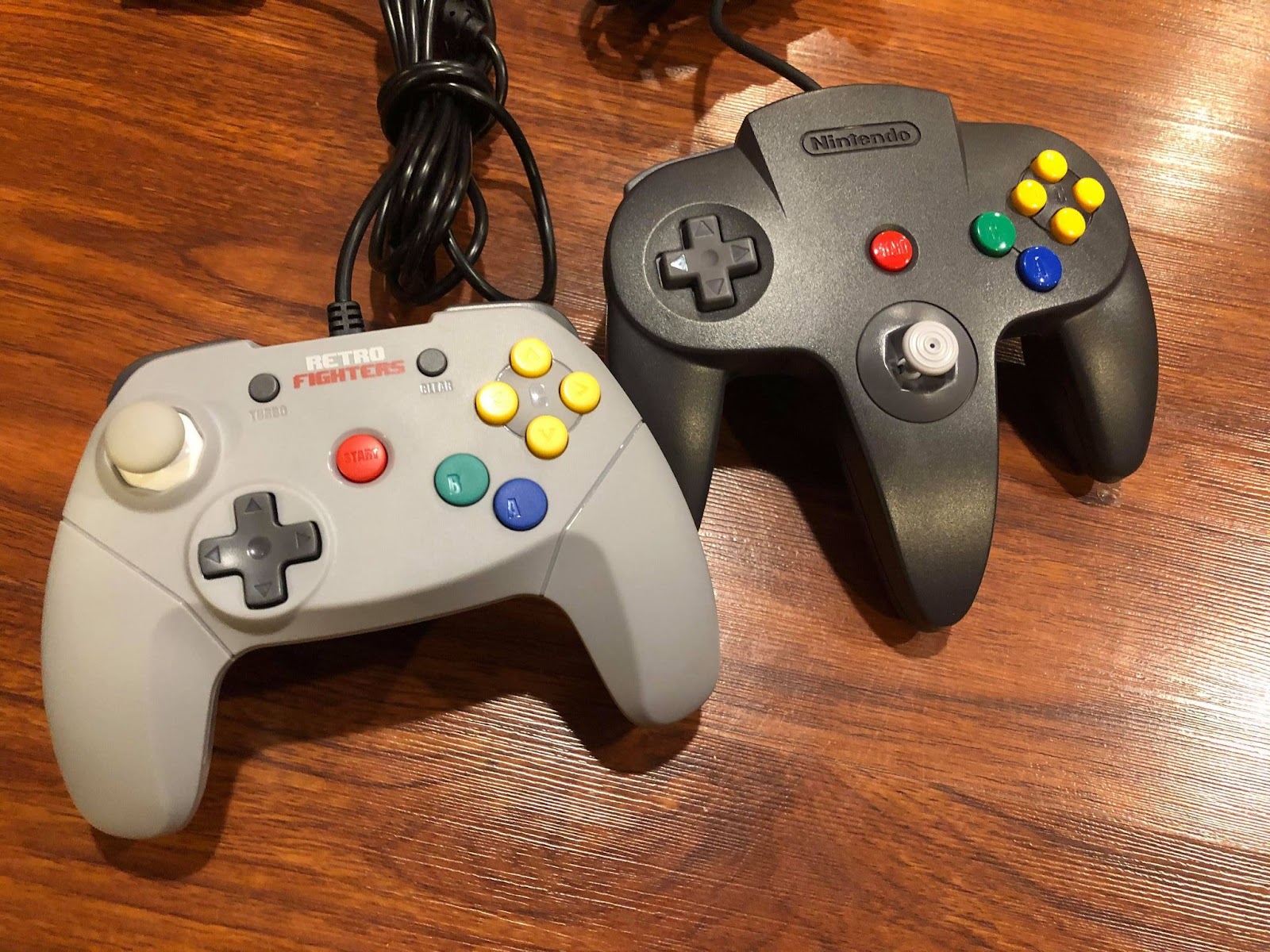 Probably the most important part of the Nintendo 64 controller is the analog stick, and this is easily the biggest improvement Retro Fighters made over the original design. This stick feels absolutely wonderful. It has the perfect amount of resistance, it’s buttery smooth, and it looks like it can stand up to the rigors of Mario Party with ease.

If I have one complaint, it’s that it still sits in an octagon like the original. I’m sure there’s some sort of reason the stick isn’t placed in a perfect circle, but if there is, I’ve never understood it. The only thing I’ve ever found that shape to be good for is making fun clicky noises when spinning the stick around. It does help maintain a level of authenticity, but I’m not a fan.

That’s more of a personal preference though. Hardly a legitimate strike against the controller itself.

I was initially a bit worried about the stick because I already have the Striker DC (Retro Fighters’ Dreamcast controller) and the analog stick is a pretty strange animal on that one. I love it, and it’s great for Dreamcast, but it’s extremely loose feeling, and while that works for Dreamcast games, it’s not ideal for Nintendo 64 gaming. Thankfully, those fears were unwarranted. Good job, guys!

I tested this out with Super Smash Bros., Super Mario 64, Mario Kart 64, Yoshi’s Story, and Donkey Kong 64. The stick felt fantastic in each one of them. 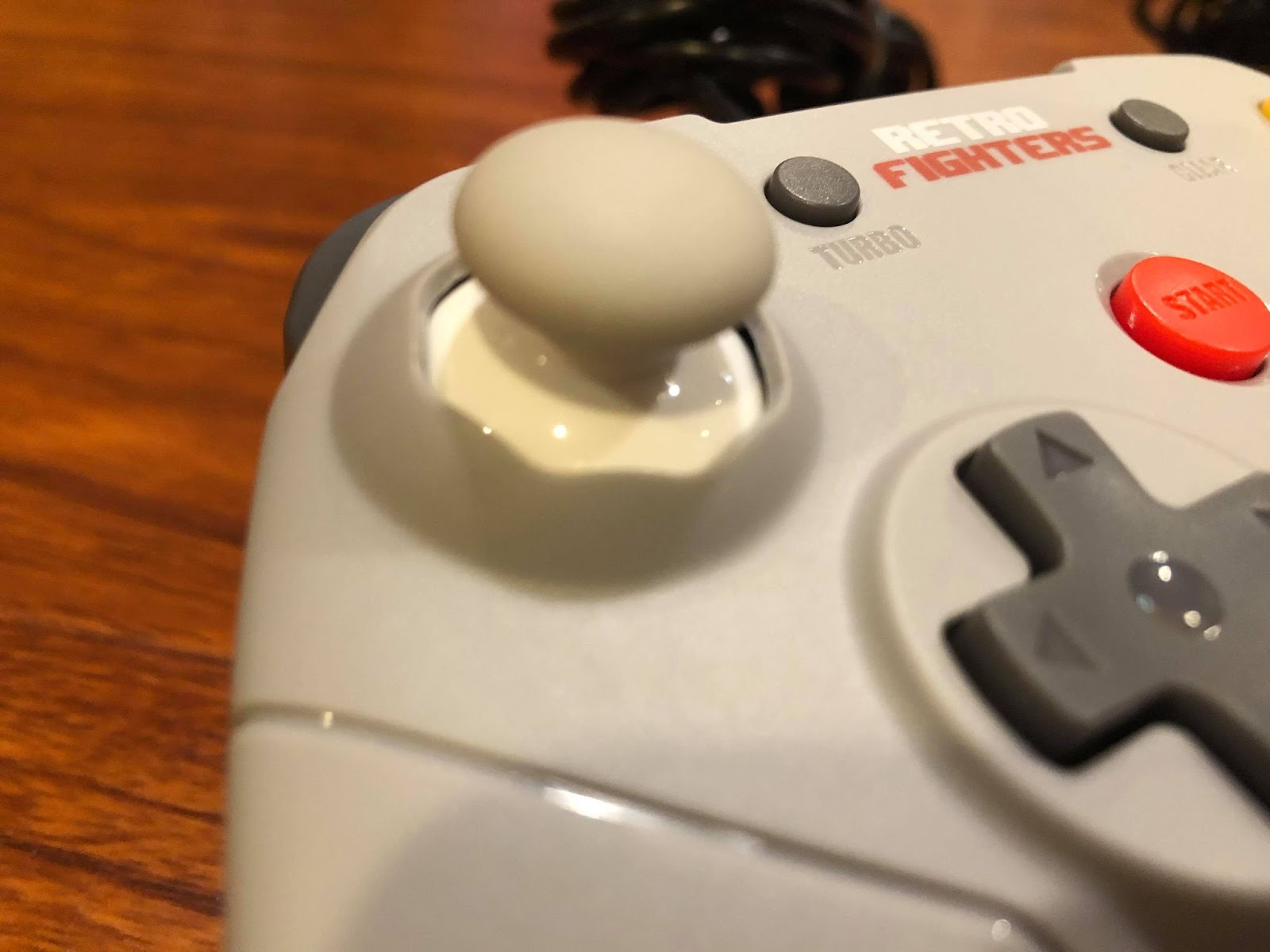 When most people think of the Nintendo 64, they think of the games I mentioned above, or stuff like Banjo-Kazooie, Ocarina of Time, GoldenEye 007, etc. For me, it’s all about two games in particular: The New Tetris and Dr. Mario 64. With the exception of maybe Ocarina of Time, there are no other games on the platform that I spent more time with, and they rely heavily on a responsive D-pad.

This one was a BIG win for this thing. The D-pad is darn near perfection. It doesn’t sit too high or too low, it doesn’t feel squishy, it’s responsive as all heck, and it doesnt’ have any sharp corners. The only way it could be better would be for it to be the exact same D-pad that's on Nintendo’s own 64 controller (which is the same one they used on SNES and is the most perfect D-pad ever conceived by man.)

But you don’t play Tetris with a D-pad alone. You need buttons too, and that’s where the trouble comes in... 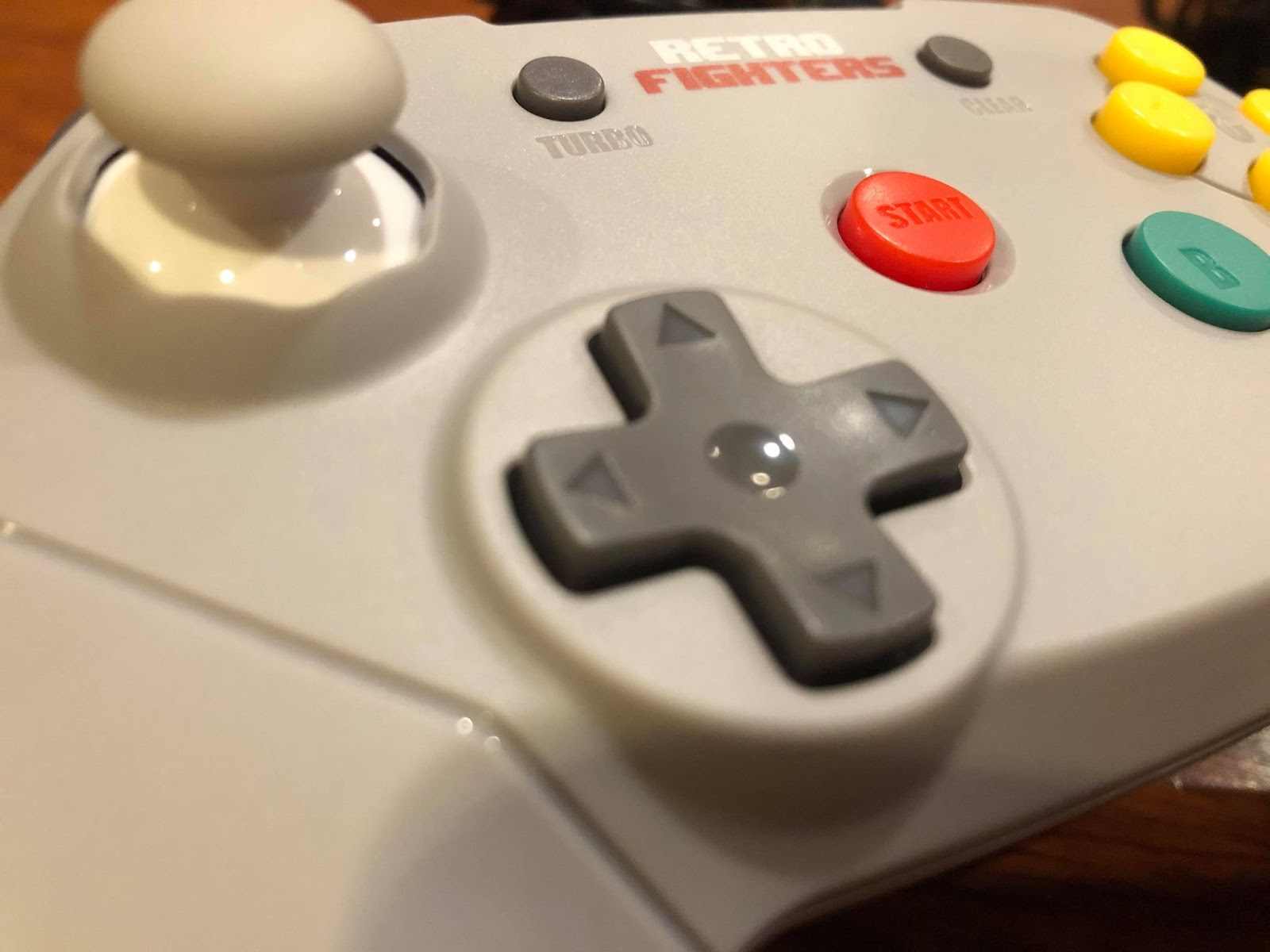 This is the only area where this controller falters. The C-buttons are great. The start button is great. The triggers and shoulder buttons they used to replace the Z button are excellent. That all works like a charm.

The A and B buttons though, aren’t so great.

This is by no means a complete deal breaker. I still feel that the controller is an overall improvement over Nintendo’s wacky design, but these two buttons are where the vast majority of gameplay is actually done, so having them be anything less than perfect is a pretty big strike against it.

These two buttons have way too much give. They push all the way into the controller as opposed to only going down about halfway on the N64 pad. This wouldn’t be as big of a problem if they weren’t as tall as they are, but they are and it is. As a result, the buttons don’t feel responsive, even though they actually are. There’s simply way too much movement involved in every simple button press, and it’s a pretty big hairy deal.

On the left, you can see me pressing down an original N64 button, and on the right that’s me pressing the Brawler one. The buttons sit at about the same height. The N64 ones are a little taller, but not by much. The amount they move though, is night and day.

They were so close to perfection. It really is hard to fault them for it. Overall, this is the best 3rd party N64 controller I’ve ever held. There’s an impressive amount of quality and care put into its design. The A and B buttons being the way they are is a massive point of confusion, but it doesn’t take long to get used to. It’s not unplayable, but it doesn’t feel quite right either.

Still, when literally everything else about the controller is a major upgrade, it’s pretty easy to get past that one flaw. It’s got a longer cord, it’s comfortable, and it feels good to play Tetris with. What more do you need?

One more time, because links are fun, here's where you can get your own Brawler64.