Retro Fighters made something of a name for themselves when they released the Brawler64 Nintendo 64 controller. Many 3rd party N64 controllers have come and gone over the years, but this one looked special. Playing Nintendo 64 games without Nintendo’s bizarre trident-shaped controller was certainly something there’s a demand for, and for many, the Brawler 64 was just the ticket.

They were right, and the controller was a big success.

So, the fine folks at Retro Fighters have now turned their attention to another beloved classic gaming system in need of a controller refresh, and the results are the StrikerDC for Sega Dreamcast. It isn’t perfect, but I can safely say it’s the best Dreamcast controller I’ve ever used.

Evolution can be weird 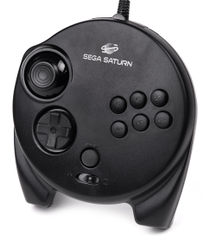 Looking back at the evolution of Sega’s controller design is almost as wild as looking at Nintendo’s. I say “almost,” because Nintendo is clearly insane, but Sega isn’t too far behind them. Starting with the Master System, their first major controller looked almost exactly like its NES counterpart, except without the Start and Select buttons and one of the weirdest D-pads I’ve ever seen. The Genesis started off a bit chunky, but by the end of its life cycle found its way into a marvelous controller that felt great, had an amazing D-pad, and a whopping fully functional 6 face buttons. Saturn followed that up with a slightly clunky misfire at first, but eventually landed on one of the most perfect controllers ever designed.

After that is where things got… rounder. With the release of NiGHTS on Saturn, Sega also launched their 3D controller, which included a pretty neat little analog stick. Well, more of an analog ball really, but the basic principle was the same. The weird thing about it though was just how round it was. To heck with ergonomics, let’s just make the controller a giant circle!

I’m not saying it was a bad controller to use, but it really felt like a step back from the perfection they had achieved before.

And that leads us to the Dreamcast controller. A pointy, bulky, round mess that provides some incredibly cool functionality, but is ultimately about as fun to use as a Brillo pad.

The VMU stuff was incredible, and was the first time I had ever seen a controller with a secondary screen in it. The analog stick was also pretty nice, especially for those of us who spent a lot of time with the N64’s pointy stick of doom. Outside of that, though, the official Dreamcast controller had some major flaws. 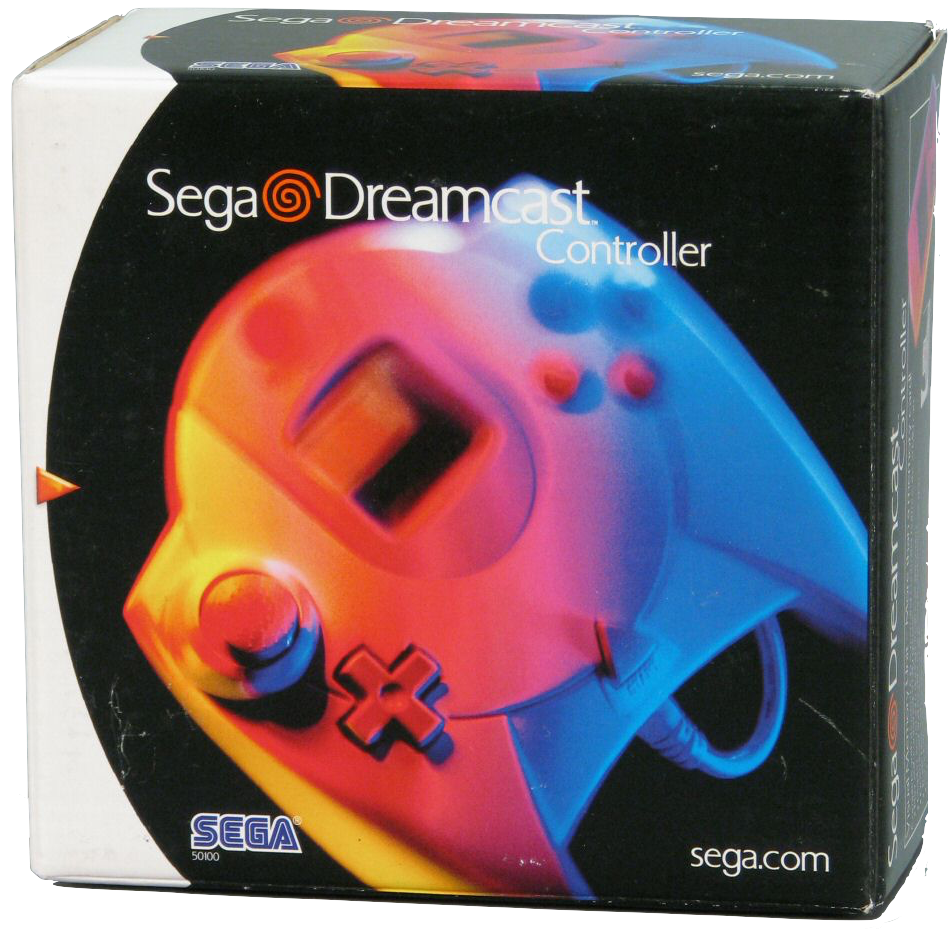 First, it only has 4 face buttons. This is still the standard on most modern controllers today, but after nailing the 6 face button design on the Saturn, only having 4 on the Dreamcast felt problematic, especially considering how the shoulder buttons worked.

Instead of what other controllers had at the time, the Dreamcast’s shoulder buttons were triggers. For playing racing games or shooters, this is actually kind of cool. For playing fighting games, something the Saturn and Dreamcast were pretty well known for, using those triggers was pretty miserable.

Speaking of fighting games, the Dreamcast has one of the most mean-spirited D-pads ever created. Playing games like Street Fighter where you have to input complex commands on the thing just plain hurt. It was made of a pretty hard plastic, and the edges weren’t rounded off very well. Those corners may not have seemed sharp at first glance, but after a couple hours of King of Fighters or Marvel vs. Capcom, things got pretty blister-y.

Finally, there’s the cord. This is without a doubt one of the Dreamcast controller’s worst design flaws. In case you forgot or have never had the privilege of holding an actual Dreamcast controller before, the cable for this thing comes out of the bottom of the controller, which is absurd. It was obviously placed that way because of the openings at the top for the VMU, and Sega definitely realized this was an issue because they included a “fix.”

There’s a small slot you can clip the cord into which makes it seem more like the cable is coming out of the top of the unit. It’s mostly a perfectly functional solution, except for the fact that this takes a good 6 inches off the cable’s usable length, making it just a bit too tight for most TV setups.

Also, why they couldn’t have just hardwired the controller to have the cable come out at the clipping point is beyond me, but I’m sure they had a reason. Not necessarily a “good” reason, mind you, but a reason nonetheless.

Retro Fighters to the Rescue

The first thing I noticed then I got the StrikerDC was how snazzy the box itself is. I remember boxes for 3rd party controllers back when the Dreamcast was on the market, and none of them were this nice. This could just be the way 3rd parties do things these days, but regardless, this is a really nice-feeling box.

When I opened it up I was greeted with some instructions, stickers, and a very well packaged controller. As excited as I was to wrap my hands around the controller itself, my curiosity was immediately piqued by a blue slip of paper labelled FAQ.

Right at the top, the first question was about the analog stick’s feeling of light resistance. I thought this was a good question to have an answer for right at the top of everything, especially for anyone who hasn't used their Dreamcast controller in quite a while. They answered it with a bunch of technical stuff, but honestly, the Dreamcst’s analog stick was always pretty light on the resistance, especially when compared to its competition. So I was glad that they seemed to be keeping up with the overall feel of that stick, which was wonderful in my opinion.

It’s all about the feel

Onto the controller itself. It’s ever so slightly wider than the original DC pad, but it doesn't feel bulky. It actually feels less so than the original because it isn’t a big circle. The first thing I checked was how the D-pad felt, and I was immediately very happy. It’s impossible to tell this kind of thing from a picture or video, but it’s made of the right kind of plastic. It doesn’t feel like the old “Performance” brand controllers they sold at FuncoLand. This thing feels solid and well made. 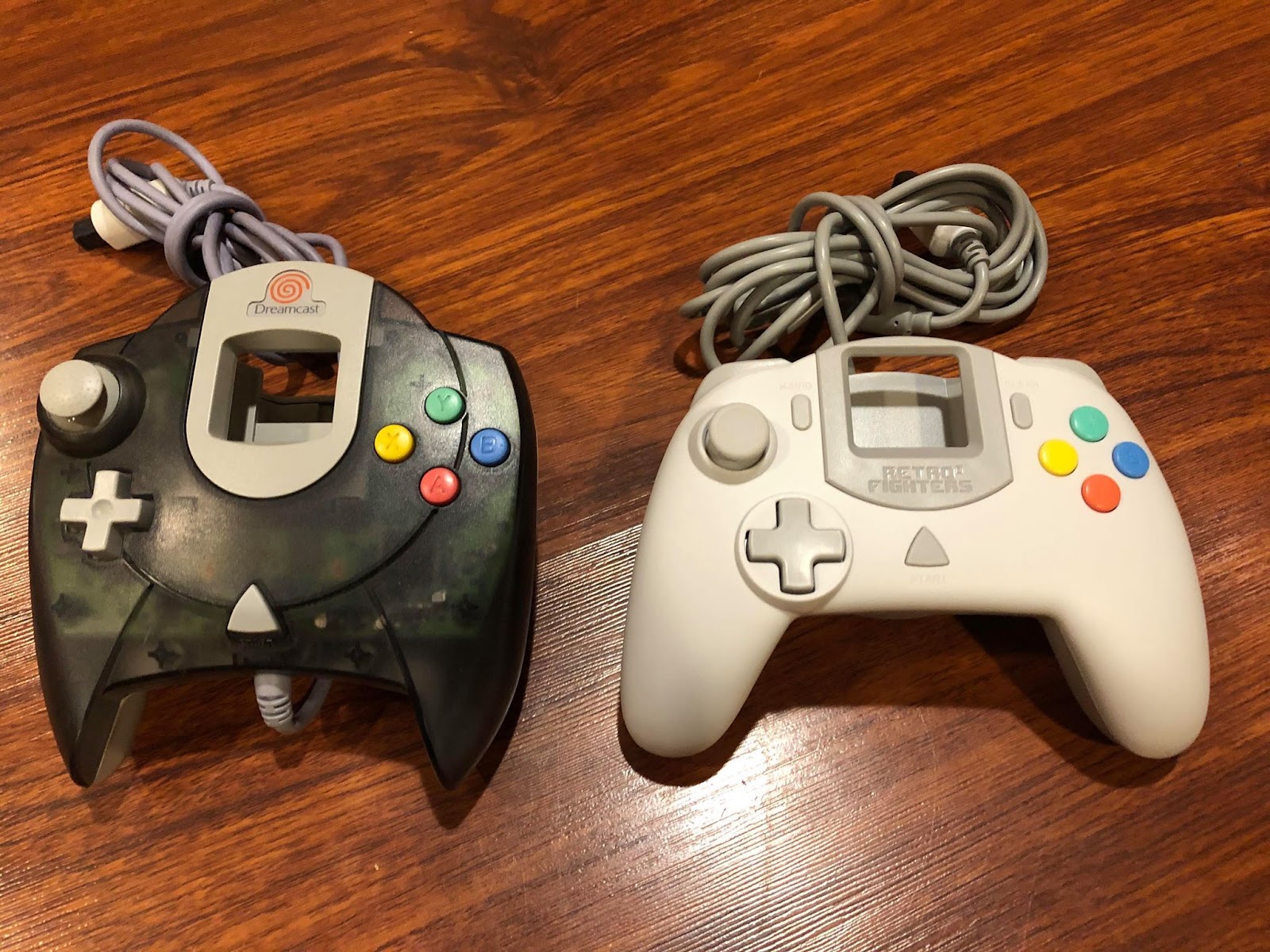 The next thing I had to look at was the way the cord comes out of the back, and it’s a perfectly elegant solution. It’s facing upward so you don’t have to clip anything down yourself, and it doesn’t get in the way of anything at all. 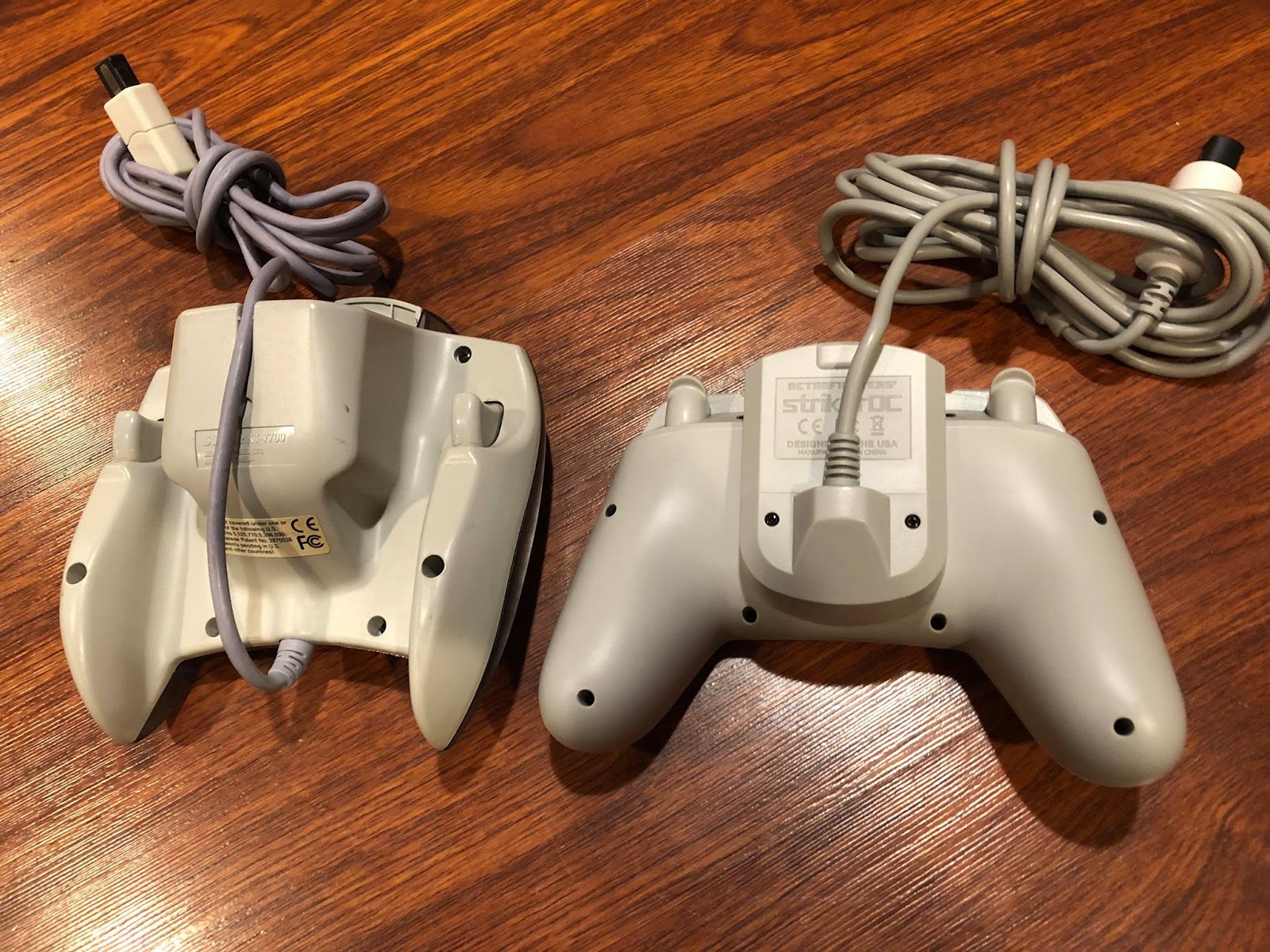 So, it’s shaped right, it’s comfortable to hold, and it feels like a quality product. But all of that doesn’t mean anything if it doesn’t work the way it should. So we got right into the testing.

Earlier that morning, I ran through playing a handful of Dreamcast games with the original controller to remind myself of how it feels to use. It had been a while since I had used one for more than a couple of minutes, so a refresher for comparison was necessary. I primarily played Toy commander to test the analog stick and triggers, and Street Fighter III:Double Impact for the d-pad.

The first game I tried with the StrikerDC was Toy Commander. I really wanted to mess with that D-pad, but Toy Commander is my favorite Dreamcast game, and it’s a great place to test out the VMU and analog stick. Also, my 6-year old son wandered downstairs when I was about to start testing and he requested it. 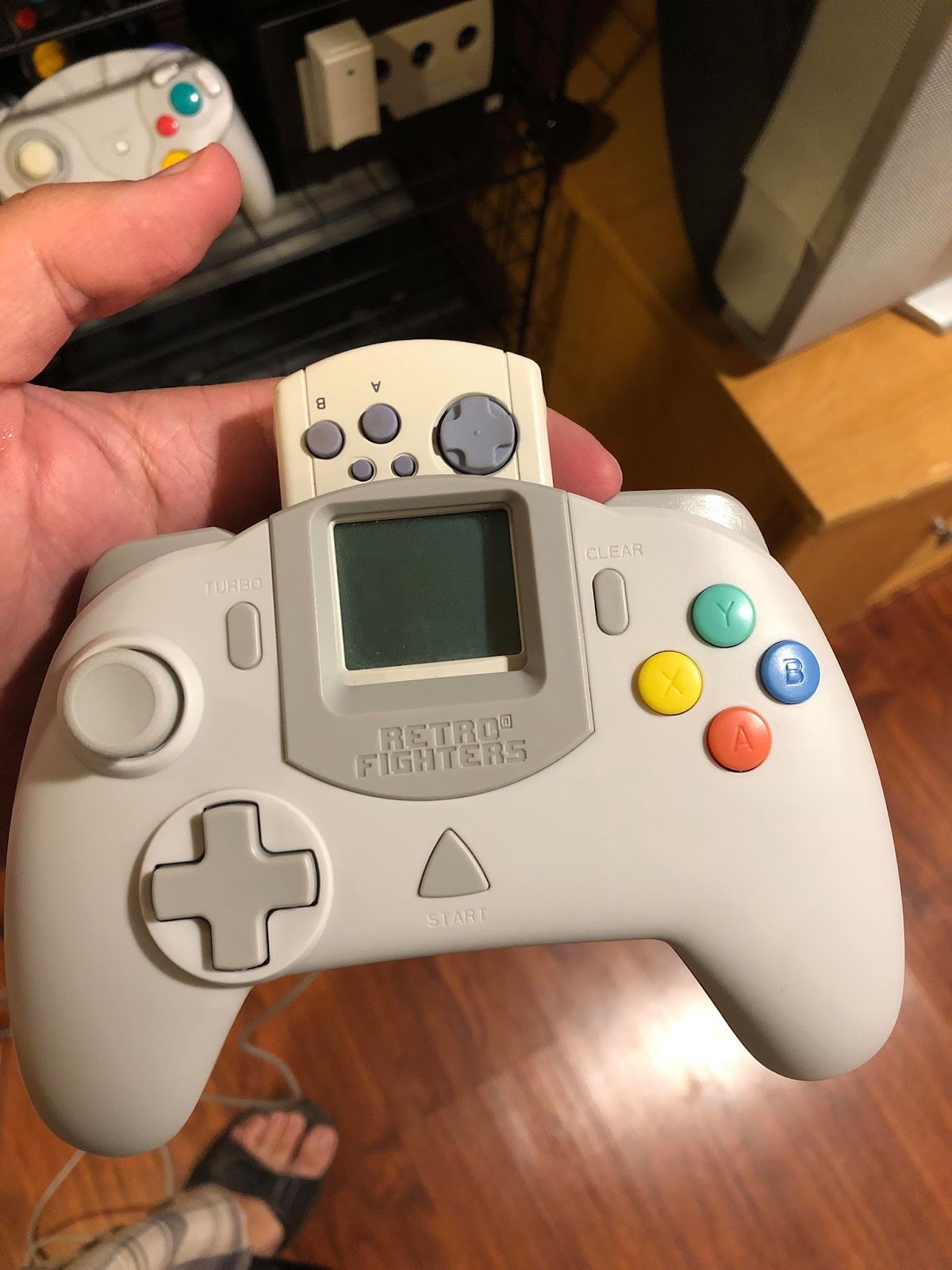 First thing’s first, I wanted to put my VMU in to continue where I had left off that morning. The VMU slot is a bit more snug than I’m used to. It’s also kind of sharp. I’m not saying it’s actually dangerous or anything, but I did scratch myself when trying to get the VMU out. The edges on the original pad are ever so slightly rounded off, where on the StrikerDC they come to a sharp edge. A SUPER minor complaint, but it is something to be aware of.

It also sticks out of the top a bit, but I suppose that was unavoidable.

Anyway, once the game booted up, I got a good feel for the analog stick, and it feels pretty great. It’s a vast improvement over Sega’s controller. I don’t hate the original DC pad, but it’s far from my favorite, and the StrikerDC made playing Toy Commander feel better than it ever had before.

I also noticed that there were 2 sets of shoulder buttons, which somehow slipped my notice at first glance. They mention this on the FAQ as well, and it’s pretty cool. The double set of shoulder buttons means you can use the analog triggers for stuff like racing games (or Toy Commander) and you don’t have to do the whole trigger pulling thing for games like Street Fighter, which is most welcome.

Speaking of Street Fighter, my next game was Street Fighter III: Double Impact. I could have sworn I owned 3rd Strike, but I couldn’t find it in with my games. Bummer.

Anyway, this was the real test to me. If that D-pad worked as well as it felt like it would, it was going to be great, and it didn’t disappoint. It’s not the 100% most perfect D-pad solution ever designed, but it’s such a monumental improvement over the original it’s not even funny. It sticks out about as much as a Super NES D-pad does, and it has just the right amount of resistance and click to its movements. I was able to pull off almost every move I tried to do, which was great. 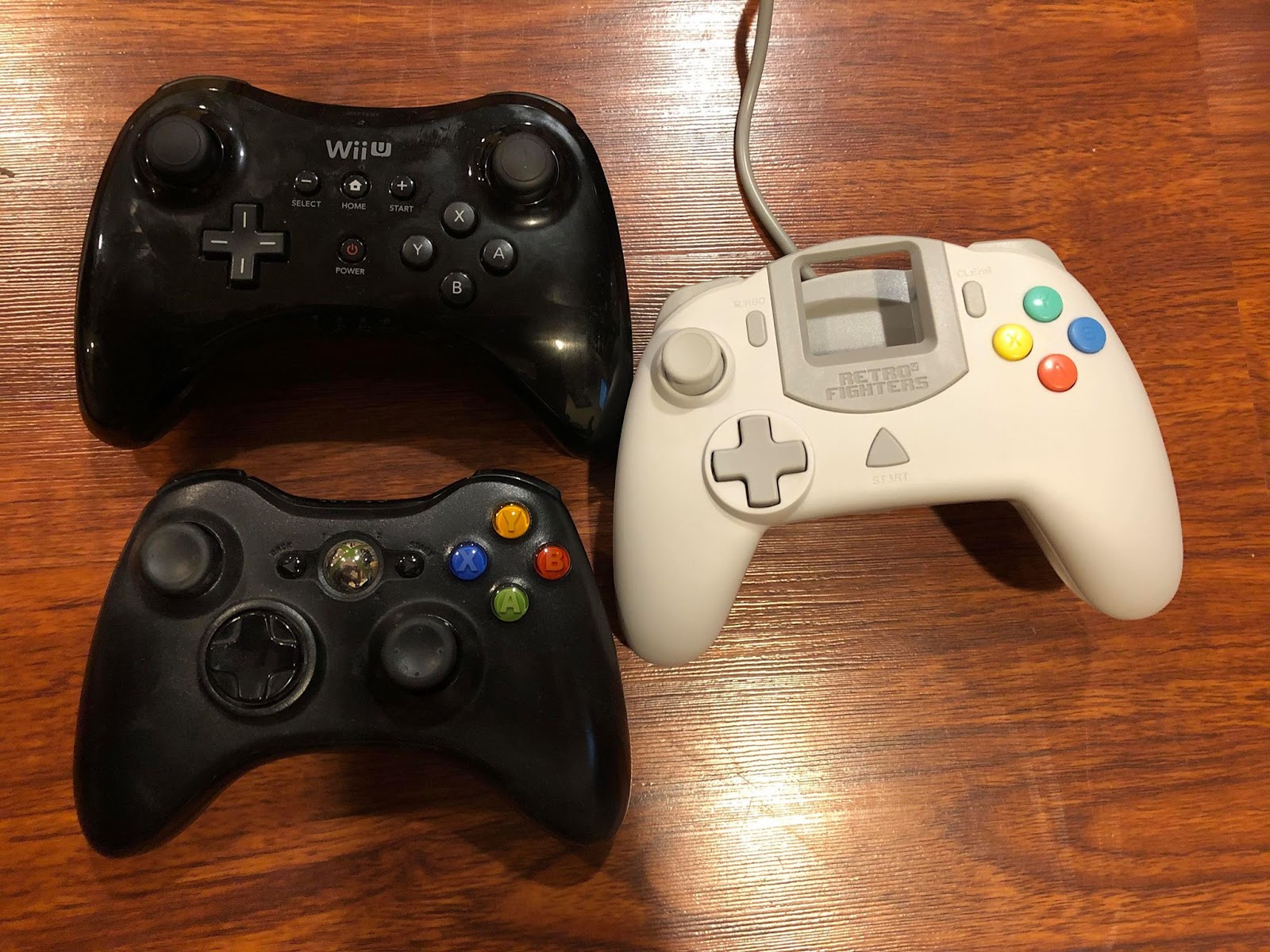 It does feel a little too close to the bottom of the controller though. Not that I ever felt like my thumb was going to slide off the bottom or anything, but where on something like the Xbox 360 controller you have a couple centimetres of controller under the D-pad, this thing is right up against the bottom. It by no means ruined my experience, but it was something that didn’t quite feel right.

I do have one major issue with the StrikerDC though, and it’s about the face buttons. The buttons themselves are fantastic. They have a great feel and they’re perfectly clicky. I love them. But there’s only 4 of them.

Why, when making a controller that’s designed to feel good for playing fighting games, they didn’t design it to have 6 face buttons, is completely beyond me. I understand the desire to make it more like the authentic Dreamcast experience, but in all honesty, if you’ve already gone so far as to add a pair of shoulder buttons, why not go that extra step and give us 6 face buttons? The Dreamcast is home to some of the best fighting games ever made, and to have a controller that comes this close to near perfection only to stumble those extra few feet is slightly maddening.

But focusing on what it isn’t doesn’t do the StrikerDC the justice it deserves, because what’s here is by far the best Dreamcast controller I’ve ever held. I don’t imagine I’ll be going back to my original anytime soon. It doesn’t have the same personality as Sega’s controller, but it’s all about functionality, and the StrikerDC has it where it counts. I can’t recommend it enough.

If that all sounds god to you, buy yours here!