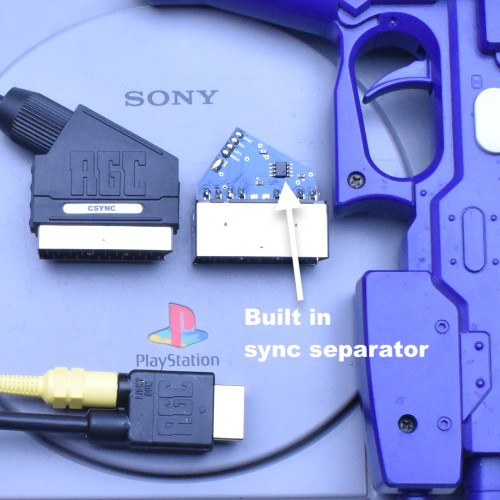 Level up with an RGB SCART! This cable supplies an RGB video signal and stereo sound from your Sony Playstation 1 which is far superior than the original video cable. This cable is screened to minimise interference and is wired for composite sync (CSYNC). Please see comparison pictures using the Retro Gaming Cables RGB SCART compared to a regular composite video cable. It also benefits from internal capacitors connected in series with each RGB video line to remove any direct current (DC) signals, which may impede the true alternating current signal used in signal transmissions.  This cable is wired for CSYNC also known as composite sync,  which has a built in video sync separator circuit and is powered directly by the Playstation console.

CSYNC will also work on most regular modern television sets. (This cable is for a CRT only if you want to use a lightgun). For further information on CSYNC please our Demystifying RGB Sync guide.

Q. Is this PlayStation SCART cable compatible with all console regions?
A. Yes, this cable works with all PlayStations 1 & 2 consoles released world wide, including PAL and NTSC versions. However we do supply separate cables for the PS1 and PS2, as the PS1 doesn't have the 200uF capacitors between the video encoder and the A/V output socket inside the console but the PS2 does, therefore,  our PS1 cables have capacitors inside the SCART plug and our PS2 cables does not. This is to ensure maximum electrical compatibility for each console,

Q. What is the CSYNC version for?
A. Mainly for up-scalers like the Framemeister XRGB-mini and professional monitors, like the range of Sony PVM and BVM’s, but will work with regular SCART TV’s and SCART to HDMI up-scaling boxes.

Q. Does the Light gun port on this cable allow you to play on Modern Flatscreen TV like, LCD, plasmas etc?
A. No, as light guns for the PlayStation only work on the old style CRT televisions and not the modern flat screens.