Games on rails have always been some of my favorites. Whether they’re light gun shooters like House of the Dead or Virtua Cop, scrolling shooters like R-Type or Stinger, or even more 3D fare like Sin & Punishment or Panzer Dragoon, games that take care of some of the movement for you can be a blast (no pun intended). This type of game, however, has fallen on some pretty hard times. Light gun games saw a small resurgence around the Wii era thanks to the Wii Remote’s similarity to a light gun, but that has since died down. Scrolling shooters still come out from time to time, but they seem to have been relegated to super-difficult fare that while can still be really good, can also be really frustrating. Finally, games like Panzer Dragoon are few and far between, with the last big title of that style I can remember being the ill-fated Star Fox Zero, which had more than its fair share of problems. With a dearth of new games to scratch this particular kind of itch, I find myself going delving back into the classics for some on-rails good times. One of those classics is a Super NES gem I absolutely adore that I also never seem to hear anyone besides me talk about. That game is TinStar. 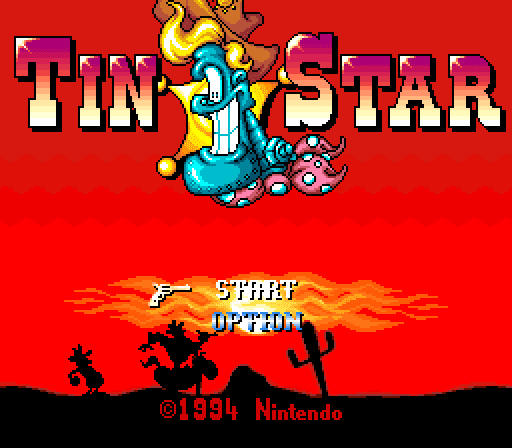 TinStar is completely absurd. The game’s setting has a sort of Wild West motif, except it takes place in the Wild East, and everyone is a robot. You play as TinStar, the new sheriff in the town of East Driftwood, taking on the Bad Oil gang with your sidekick Mo and your trusty robo-steed Aluminum. The visuals are bright and colorful in the best possible way, and they give off a great classic Looney Tunes vibe. Everything animates really well, and it all gives off a remarkable amount of character. It doesn’t really look quite like anything else on the console. One of the cool things about games on rails is that they have a tendency to look really nice because they don’t have to take into consideration the player making as many decisions about where they’re going. I can’t say for certain TinStar benefits from this, but the art direction is really spectacular.

For as good as the visuals are though, they wouldn’t feel half as good if it weren’t for the outstanding dialogue. Before every stage there’s some sort of cutscene that advances the game’s ridiculously silly plot. It’s been a few years since I’ve spent time with this one, but if memory serves me right, TinStar accidentally knocks over a flower pot that belongs to the boss of the Bad Oil gang, and that basically starts an all out assault on East Driftwood by the evil baddies, and TinStar has to stop them once and for all. A plot that stupid could only work if the writing can make it shine, and fortunately that is the case here. I’ll never forget this one scene where the Bad Oil gang is shooting up the town, except now they’re all wearing dresses. Mo rolls into TinStar’s bathroom where he’s taking a bath. It goes something like this:

Mo: Why are you looking at that Good Guy Code of the West?

TinStar: So these are just women on their own! Gety my guns, Mo!

That one still makes me laugh. Then there’s this little exchange between TinStar and one of the boss characters.

Bugsy: Go for your gun

TinStar: No need. I brought it with me.

The game’s humor reminds me a lot of the old The Tick cartoon. It actually still makes me laugh when I see it, and that’s not something that happens too often with video games and me. Yes, it’s stupid, but charmingly so, and I love that so much about this game. 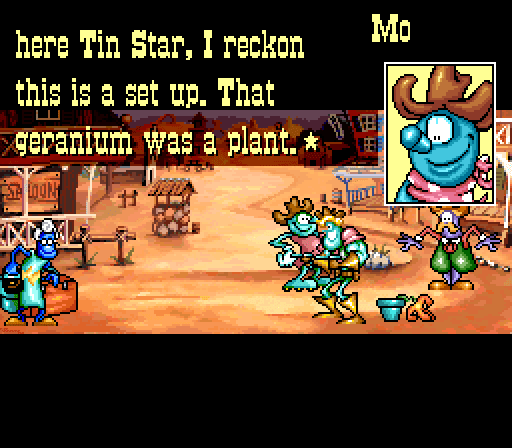 Then we have the music, which is about as perfect as can be. It’s got the mandatory-for-the-genre classic spaghetti western flavor to it, with just the right amount of goofiness tossed in to fit the atmosphere that the visuals set. The instrument set they chose is just the right amount of loud, with plenty of guitar and banjo sounds filling up each unforgettable tune. It’s really catchy stuff, too. From the bold, energetic title screen theme, to the cool, calm quick draw and story segments, it’s one of my favorite SNES soundtracks, and if you know me, you know that’s saying something.

But none of that other stuff would matter much if the game wasn’t fun to play. Fortunately for TinStar, it’s a freaking blast. Like I mentioned earlier, this is an on-rails experience, but it plays things a little differently. There are basically 3 kinds of stages. First, you have the1st person segments where the camera slowly pans back and forth across a preset area. These stages play out pretty much like your average target shooting game like Area 51 or even Duck Hunt. Bad guys appear and you have to shoot them before they shoot you. There are also destructible pieces of the environment that can earn you some extra points if you shoot them, and the occasional good guy NPC that pops up where they don’t belong. If you shoot them, you lose health. 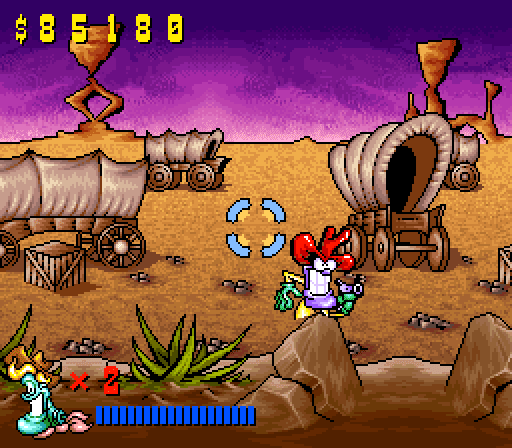 The other 2 kinds of stages are where the game gets more interesting. The second type of stage looks like a side-scrolling platformer. TinStar is there walking around and jumping on things, but he moves automatically. You move a cursor around the screen and shoot the enemies as they appear. It’s a really cool effect because TinStar will aim his guns at the cursor when he shoots, which makes the whole thing look like a run and gun platformer, even though it isn’t. These stages are usually either done with TinStar walking through a town, shooting up breakable windows and high-diving into water barrels, or fast-scrolling stages played on horseback with your steed Aluminum. It really does just boil down to some dynamic-looking target shooting, but something about the way it all comes together really works well. 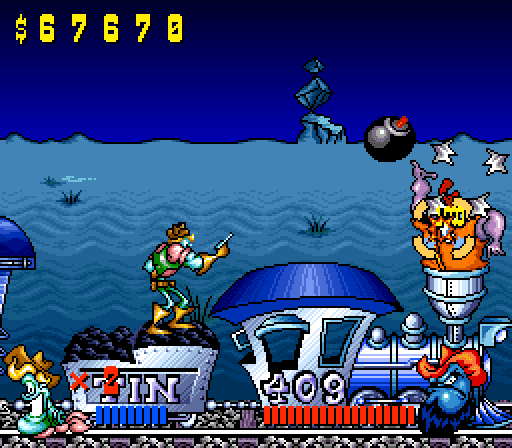 Finally, we have the quick draw stages. These are super-cool because of the pretty genius way they make them play out. You stand across from your opponent and wait for the screen to say “DRAW” on it. Once it does, a picture of your gun’s chamber will appear in one of the 4 corners of the screen. You have to move your cursor over to the chamber and hit the button to draw your gun, then aim at the bad guy and shoot. It’s quite challenging, but it gets very intense, especially in the later parts of the game. 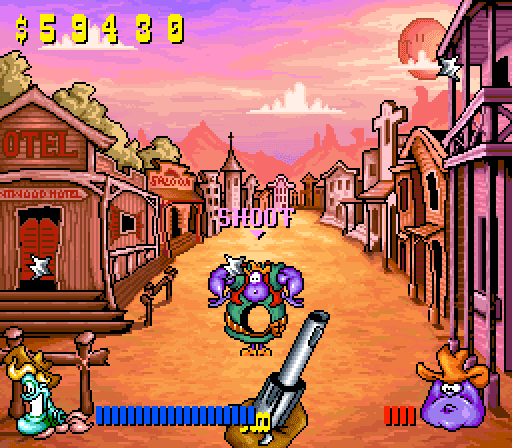 What else sets TinStar apart is its control options. You can absolutely just use the standard controller and move a cursor across the screen with a D-pad, but that’s hardly my idea of a good time. You could also use the Super Scope, but for as much as I love that thing, weilding a bazooka in a western themed showdown just doesn’t feel right. No, if you want to play TinStar the best way possible, you’ll need to bust out your Mario Paint mouse, and maybe a controller extension. The mouse works so incredibly well for this game. The precision it affords makes the later quick draw stages much more manageable, and it just feels really good to go through the game this way. The other modes are perfectly functional, but the mouse is definitely where it’s at.

The world created for this game is fantastic, and it’s a real shame this was the one and only instance of its existence. I’ve been patiently waiting for some sort of sequel to TinStar for years, but I feel like if it didn’t happen during the Wii era, it’s simply not going to happen at all. That’s a shame, because a game like this is ripe with possibility. TinStar and all the other colorful characters in East Driftwood are just teeming with personality. A TinStar stage in Smash Bros. would be pretty great, too. The one piece of good news though is that this isn’t one of those revered underrated classics that’s shot up in value over the years (I’m looking at you, Twisted Tales of Spike McFang), so if you’re looking to give it a try, it’s not too hard to come by at a fair price. I can’t recommend it enough. Now go out there and be the best darn robot sheriff you can be!

(Images used in this article were originally from Super Adventures in Gaming [http://superadventuresingaming.blogspot.com/2011/0...