Pinball and video games go hand in hand. They’ve been linked to one another since the golden age of arcades, so naturally, pinball video games were inevitable. For generations, game makers have been trying to bring the pinball experience home without having to spend thousands of dollars on an actual pinball machine. There are naturally a few intrinsic challenges in doing that. Pinball tables are inherently vertical experiences, and home televisions are not. Pinball’s physics are important to get right or your game isn't going to feel like pinball at all. It has to be interesting, but not overly complicated. You need to be able to follow the ball’s position. The flippers have to feel fun to use since they’re pretty much the only real interaction you have. The targets the ball hits have to be rewarding. Pinball may seem simple at a glance, but a lot has to go right to make the game properly fun.

Way back in the old days, when Atari was still king of the hill in terms of the video game market, they made a few attempts to successfully translate the arcade’s favorite pastime to their 2600 console. They had just about all the other basics down pat, and a pinball game was an important thing to get right, which eventually they did. It wasn’t their first attempt, or even their second, but the resulting game was, well, magic. 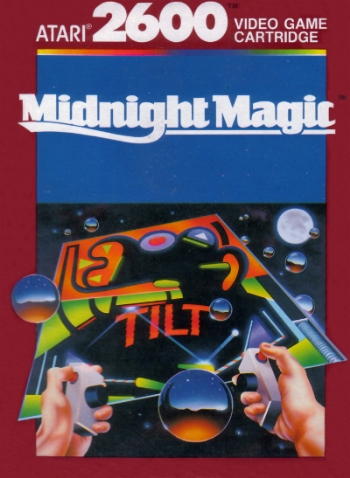 The Video Before Midnight

Midnight Magic released for the Atari 2600 in 1986. It’s a simple, yet fun pinball simulation that takes the best of what came before it and applies the most realistic simulation of actual pinball the meager Atari 2600 had ever seen. Toe road to get there was not without its bumps though. The first pinball game to grace the 2600 was Atari’s own Video Pinball. I’m not here to bash on that game by any means. It’s actually still incredibly fun. It’s also pretty weird, and ultimately not a great interpretation of actual pinball.

Probably the most notable thing about it was the ball physics, which they more or less nailed. The ball moved around in this game almost exactly how you’d expect a ball to move in a pinball game. By modern standards it’s all a bit rudimentary, but in practice it made for a genuinely fun experience. Still, there was one design choice that made the game never quite feel like real pinball, and that was the screen orientation. The table in Video Pinball is horizontal, meant to fill home TV screens of the time. The flippers are still in the middle at the bottom of the screen, but there’s an absurd amount of flat real estate sitting along the bottom that the ball tends to bounce off of more often than not. 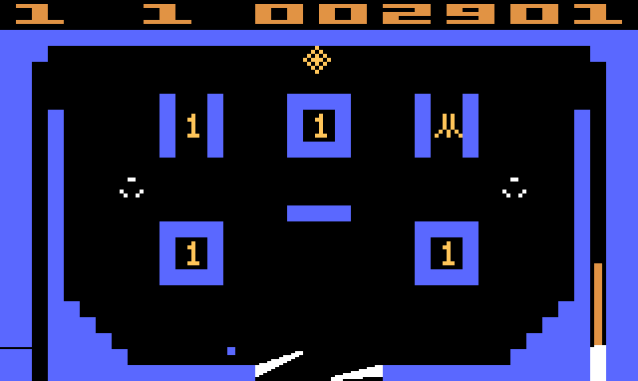 That said, the other hallmarks of a classic pinball experience were represented pretty faithfully. Targets made the screen flash and earned point bonuses, bumpers flung your ball away from them and helped keep things moving, weird little swirly things made your ball shoot off in different directions, it was all there, and the result was a very creative attempt to combine the traditional home video game with pinball. So in that respect, it was a complete success. But as a direct pinball simulation, it had a long way to go. It was a valiant effort, but it just didn’t feel right.

Video Pinball released for the 2600 in 1980 and was a pretty decent success for Atari. It carried a recognizable name thanks to their previous standalone Video Pinball products, and it’s got some of the best box art of all time, but video games were evolving at a rapid clip. The desire for a new take on video game pinball was real. Enter Midnight Magic.

As far as pinball video games go, Midnight Magic felt much more authentic than its predecessor. Not only did Atari fix the play field and flipper orientation, but the physics were faster, there were four flippers instead of two, and the experience was all around more fun. Now there were objectives, like a series of colored targets at the top of the screen, if when hit, made the table change colors. You could earn bonuses like stoppers to prevent your ball from going where you didn’t want it to. All of this, plus an even cooler swirly thing! Can’t have a good pinball video game with a good swirly thing, right? The bumpers were rounded, the sound effects were cooler, it was a massive step forward all around. 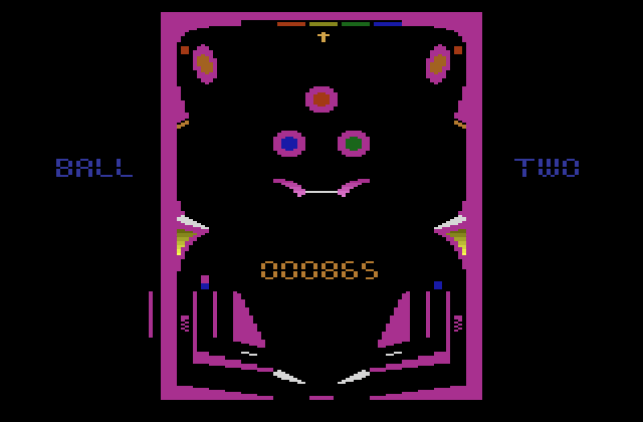 But where did this game come from? That’s something of a mystery that I haven’t 100% solved, but here’s what I know. Another pinball simulation was released in 1982 for home computers (including Atari’s 8-bit line) called David’s Midnight Magic. This game was developed by a man named David Snider, and published by Broderbund. At first glance, it would seem that Midnight Magic for 2600 is simply a port of this game, especially considering that the pinball table featured on the box art is clearly the table from David’s Midnight Magic, but the two games are apparently otherwise unrelated. Midnight Magic features a completely different table, and was seemingly developed by Broderbund and published by Atari. Strange things like that happened all the time back then though. Just look at Pole Position and Sprint Master.

All weirdness aside, Midnight Magic is a super fun game. It never really earned the notoriety that Video Pinball did though, likely due to its release timing. This is one of the “red box” Atari 2600 games that was coming out during the big US video game market crash. Video Pinball had the advantage of being released at the height of Atari’s home console dominance, and thus it remains the de facto pinball game on the platform. Unfortunately, this is probably a big part of why Midnight Magic has bever been re-released in any form. There have been many Atari compilations over the years, including the most recent Atari 50, but I’ve never come across this one on any of them. I can’t help but wonder if there’s any sort of rights issues with the game’s name involved in this not seeing any ports, but I honestly don’t know for sure. It’s a shame too because there’s a ton of fun to be had with this title. It looks great for the time, the sounds are awesome, and it plays like a dream. It’s also a pretty common cart. Even complete in the box, it can be found for only a few dollars.

Midnight Magic may be outdated, but if you find yourself in front of an Atari 2600 and you like pinball games, take some time to find this gem. You’re darn near guaranteed to have at least a few minutes of good old fashioned video pinballing fun.