The first time I played Space Invaders on my Atari 2600, I was hooked. I was pretty young, but I was still able to grasp the basic concept. Move the ship back and forth, shoot the invading aliens, try not to get hit, and stop them from reaching the ground. It’s one of the most flawless video game concepts ever created, and it’s still a fun game to this day. Naturally, there were many imitators over the years, and sometimes those games were every bit as fun as the game they were derived from. The one that always stuck out most to me though, was the Activision classic Megamania. 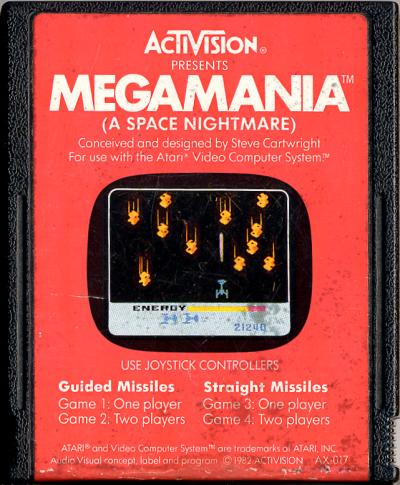 I wish I could remember where I got this game from, but for the life of me I have no earthly idea how it came to be in my posession. One thing I do remember was, for the first few months or so of having my Atari, all my carts looked the same. The label styles were different, but they all had the basic Atari 2600 cartridge shape. So when I got my hands on my very own Activision carts and realized they were different shapes, I didn’t really know what to make of it. In case you’ve never seen one before, Activision Atari 2600 carts have a very unique look to them. The first batch were all very brightly colored with actual screen shots on them (or close approximations of screen shots). Cooler than that though was the fact that the carts had these little slots in them that allowed other Activision games to lock in place when you stacked them. As a kid who liked uniformity, this was a blessing and a curse. On one hand, the few Activision carts I amassed didn’t match any of my other games, while on the other hand their stackable nature made them look fantastic all lined up. I guess what I’m trying to say here is, I loved Megamania even before I put it in my system. I loved the bright orange, I loved the cool screen shot on the cart, I even loved the name. Megamania. A space nightmare. There’s no way this game couldn’t be cool.

Boy, was I right! When you fire this cart up, you’re treated to the classic Activision start screen scroll thing. You know, that little Activision logo at the bottom that scrolls to the copyright year? I love that thing. Anyway, above that, there’s a gray HUD with what looks like 3 Starship Enterprises lined up, a place for your score, and an energy meter. When you hit the reset button to start the game, the energy meter fills up with a loud scaling noise and you’re thrown right into the thick of it. Unlike Space Invaders’ slow, methodical pace, Megamania is frantic right off the bat. There’s nothing to hide behind, your energy meter is slowly draining, and the enemies come flying across the screen fast and furious. Every piece of this thing is overwhelmingly cool, and it’s punctuated by the awesome sounds. Each enemy you shoot makes this incredibly loud booming sound. I had never heard anything quite like it before. And your laser shots also sounded like futuristic lasers instead of the more missile like sounds of Space Invaders. 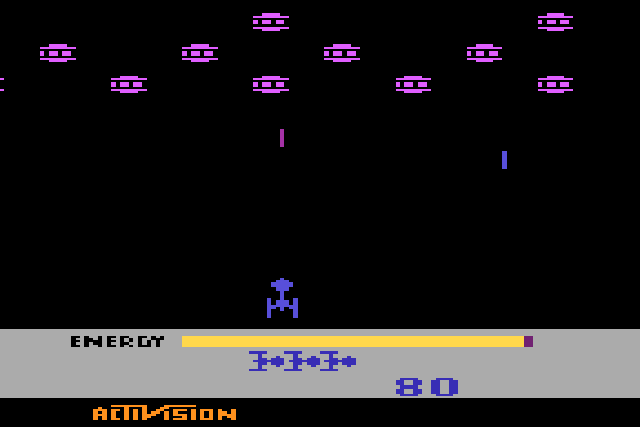 Once I got my bearings, I managed to clear the first stage without too much trouble, and the second my lazer hit that last enemy, an alarm sound started going off and my energy drained.

I remember this freaking me out for a split second, but before I could even process what was going on, my energy filled up again and and I was on to stage 2. I really can’t stress enough how intense this game’s pacing is, and especially how it felt playing it for the first time as a kid. Video games were all relatively simple back then, and they all had a pretty brisk pace when compared to the loading times and tutorial stages of today’s games, but Megamania doesn’t waste so much as a single frame on anything that doesn’t add to the intensity of the experience.

The second stage was the first time I died, and that’s because it’s where things took a pretty dramatic turn away from what Space Invaders had taught me. There was no stopping these little yellow Oreo cookie looking things from reaching the ground. Fortunately, that was just fine. Where in Space Invaders, the game creates a time limit by making it so you die when the invaders make it to the bottom of the screen, Megamania sets a time limit with your ever-diminishing energy meter. The enemies can blow through their attack patterns as many times as you let them, but if you don’t manage to shoot them all before your energy gauge runs down, you’re toast. 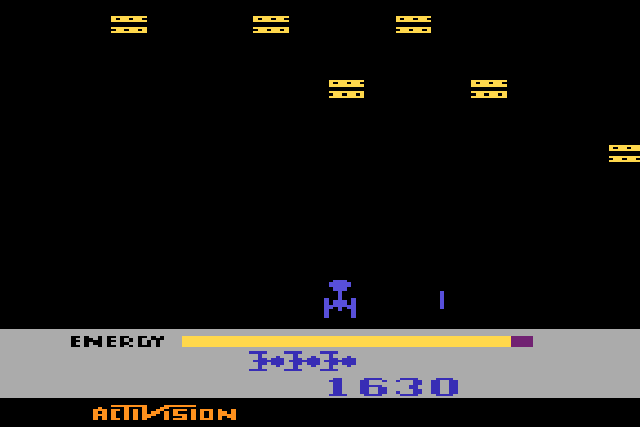 Speaking of being toast, the death animation in Megamania is also infinitely cooler than the one in Space Invaders. Don’t get me wrong, as a kid I loved how in Space Invaders when your ship blew up it basically made a hilarious fart noise, but Megamania has that beat with it’s super-slick fading away sound. When you get hit, everything freezes, and your ship slowly dematerializes with this awesome buzzing noise. It’s one of the more memorable death sequences on the platform. And if that sounds like a weird claim, think about it. Atari 2600 games almost always did something cool when you died. The eyes spinning around in Haunted House, your stick figure frying in Berzerk, your ship exploding in Defender, great stuff, all. Megamania still has one of the best though.

Naturally, there’s a finite number of enemy patterns that come flying at you in Megamania, but your first couple times through, especially at the time, it was hard not to be in awe at how many different things were moving in different directions from stage to stage. There are levels with giant asteroid-looking things falling straight down, ship things with some very unpredictable patterns slowly moving back and forth and up and down, and more. Intensity is the name of the game, and Megamania nails it in every regard. 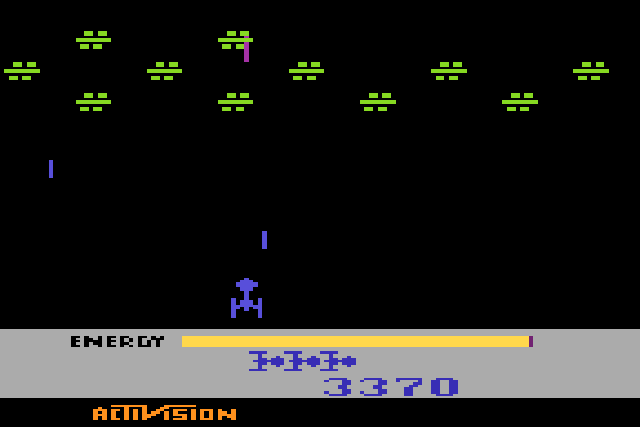 Megamania is far from the only Space Invaders clone on the 2600. Games like Demon Attack and Astroblast offer their own unique takes on the formula that are equally worth fawning over (and I probably will sometime. I love Astroblast!) but Megamania is probably what I would consider the best in the genre. It’s one of my go-to Atari 2600 titles, and if you’ve never had the pleasure of spending time with it, I can’t recommend it enough. It’s simple challenge at its finest.

(All the images in this article were found at www.atariage.com)