Sega’s arcade classic Altered Beast is not a good game. It’s a remarkably cool game, with its awesome transformations, cool monster design, and legendarily silly voice acting. But a quality gaming experience, it is not. It’s slow, clunky, and especially if you’re playing the original Arcade version, cheap as all heck. But that coolness factor is undeniable. Playing as a dude who gets to transform into rad-looking monsters and kill various zombies and whatnot is a great premise. The name is also fantastic. Altered Beast. It just sounds cool!

This being the case, it’s a wonder that there haven’t been more Altered Best games over the years. There have been rumors of Sega reviving the IP dating all the way back to the PlayStation 2, but the big-budget return of Altered Beast that fans have been clamoring for has yet to rear its beastly head. What many folks missed though, was that not only did Altered Beast actually get a proper sequel, but it was really quite good. Unfortunately, it was hard to tell because it took the form of a hideous Game Boy Advance game called Altered Beast: Guardian of the Realms. 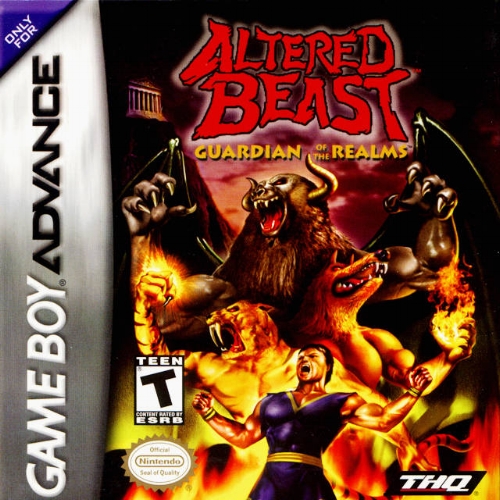 That box art may not be the easiest on the eyes, but there’s a certain degree of awesomeness on display there. But that’s about as good as this game is ever going to look because once you turn it on, everything goes downhill in a big, bad way. There’s no good way to sugar coat it. Altered Beast: Guardian of the Realms is hard to look at. It’s got that ridiculous “CGI” look going on that was so popular in its day, and it has not held up very well. Actually, “held up” is probably the wrong term. This game was butt ugly the day it was released, and the aesthetic problems don’t stop at the visuals. It doesn’t exactly have what I would classify as memorable music. However, Guardian of the Realms is more than the sum of its hideous parts. In fact, it does something so unlikely that it’s well worth a degree of commendation. It took the original Altered Beast formula and made it fun. Like, legitimately fun!

What we have here is basically an auto-scrolling beat-em-up, much like the original. It expands on the previous game's formula by adding a surprising number of new transformations, most of which are really cool. There’s plenty of content added too with 15 realms to bust up monsters in, and a bevy of new moves at your disposal to keep things interesting. Most importantly, the difficulty has been tweaked to be considerably more fair. Where the original was designed to eat your quarters, this game actually encourages you to try and beat it. 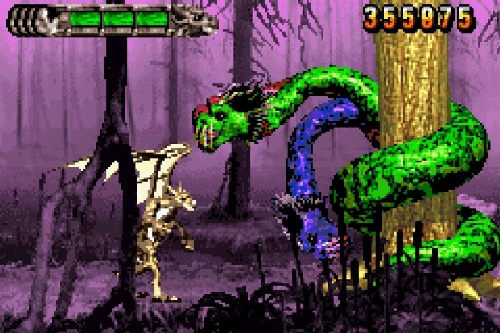 That said, all that good stuff lies buried under the game’s garish visuals, which are easily its weakest point. But in a weird sort of way, that kind of works in the game’s favor. Maybe I’m being too harsh on the visuals, maybe I’m not, but the actual monster designs are pretty great. There are some seriously freaky creatures trying to kill you too, ranging from your typical zombies and bats, to some bizarre blobs and bug creatures. Enemies explode and squish pretty nicely for the most part, and while there isn’t any blood, the whole thing still manages to come off as fairly gory. It’s a Game Boy Advance game through and through, which means tinny sound and a somewhat cramped playfield, but there’s a certain charm to games from on this platform, and while it certainly doesn’t reach the heights of some of the best on the GBA, it’s just weird and gross enough to warrant some playtime. And again, some of the new beast forms are pretty sweet. I mean, who wouldn’t want to play as this beefy eagle guy? 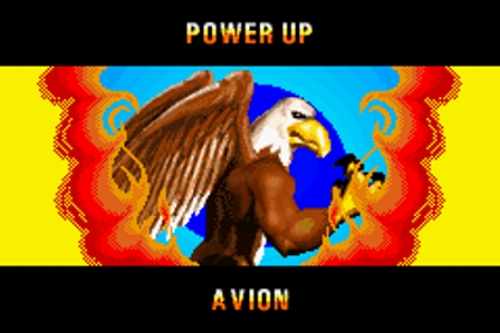 So, why has no one ever heard of this game? I have a few guesses. Namely, the publisher. While the property was licensed by Sega, it was published by good ol’ THQ, and it wasn’t exactly a success, much like a lot of what that company was up to in 2002. It didn’t get much of a marketing push, and by and large it just seemed like most people didn’t even realize it existed. I discovered the game while working at a Toys R Us and when I say store shelves were absolutely crammed with Game Boy Advance games, I mean it. At any typical retail location when Altered Beast was out, GBA space was at a premium, and priority game placement usually went to one of the half dozen Yu-Gi-Oh! games that were out at any given time, or the first-party Nintendo stuff. Or the bottomless pit of cheap shovelware games. Stuff like Altered Beast frequently got lost in the shuffle, doomed to land in bargain bins with little to no fanfare despite the fact that there was a successful revival of a classic beloved game property right under most people's noses.

Will the Beast Rise Again?

The developer 3d6 Games worked on a handful of other Game Boy Advance games, including the less-impressive Revenge of Shinobi, and has been defunct since 2013. It’s a bummer too because I can’t shake the feeling that if this game were to come out today it would have a much better chance at survival. Having been made in 2002, it was chasing the aesthetic of the day. If it were being made as a smaller download title today for modern platforms, it could have been made with a more pixel art style, HD visuals, a nice low price point, and likely made a fun little splash. Ahh, what could have been.

The good news is, since nobody seems to care about its existence, it’s a pretty easy find. It’s not exactly the cheapest game on the block, especially if you want it complete in the box, but loose carts are fairly reasonably priced.

I know there aren’t a ton of Altered Beast fanatics out there, but when I was a kid, I thought it was one of the coolest games on the planet. And that’s coming from a die-hard Nintendo fan. I’ll never forget seeing a commercial for the Sega Genesis with Altered Beast running on it looking darn near arcade perfect and secretly wishing to myself that my parents owls get me a Genesis to sit next to my beloved NES. It was just so dang cool! Anyway, if you were a fan of the original arcade/Genesis Altered Beast, track this one down. It may not be perfect, but it’s well worth your time.