Is that an arcade in your pocket?

Chances are, you’ve seen these tiny arcade things around. We’ve been posting about them on our social media platforms for a couple of weeks, they’re on store shelves near checkout counters, they’re everywhere. They look neat too, but if you’re like me, you’ve probably never pulled the trigger and actually bought one.

I’ve been curious about how these things actually work since I first saw them. Being a kid of the 80s, all I could think of was the Tiger LCD games of my youth, but surely they couldn’t be as simple as that, right? Could they really be tiny little arcade perfect representations at that size? The fine people I work for at Stone Age gamer sent me a small sampler of the different kinds of units we carry, just so I could see what they actually are. (They also sent me this adorable tiny palate.) Let’s have a look. 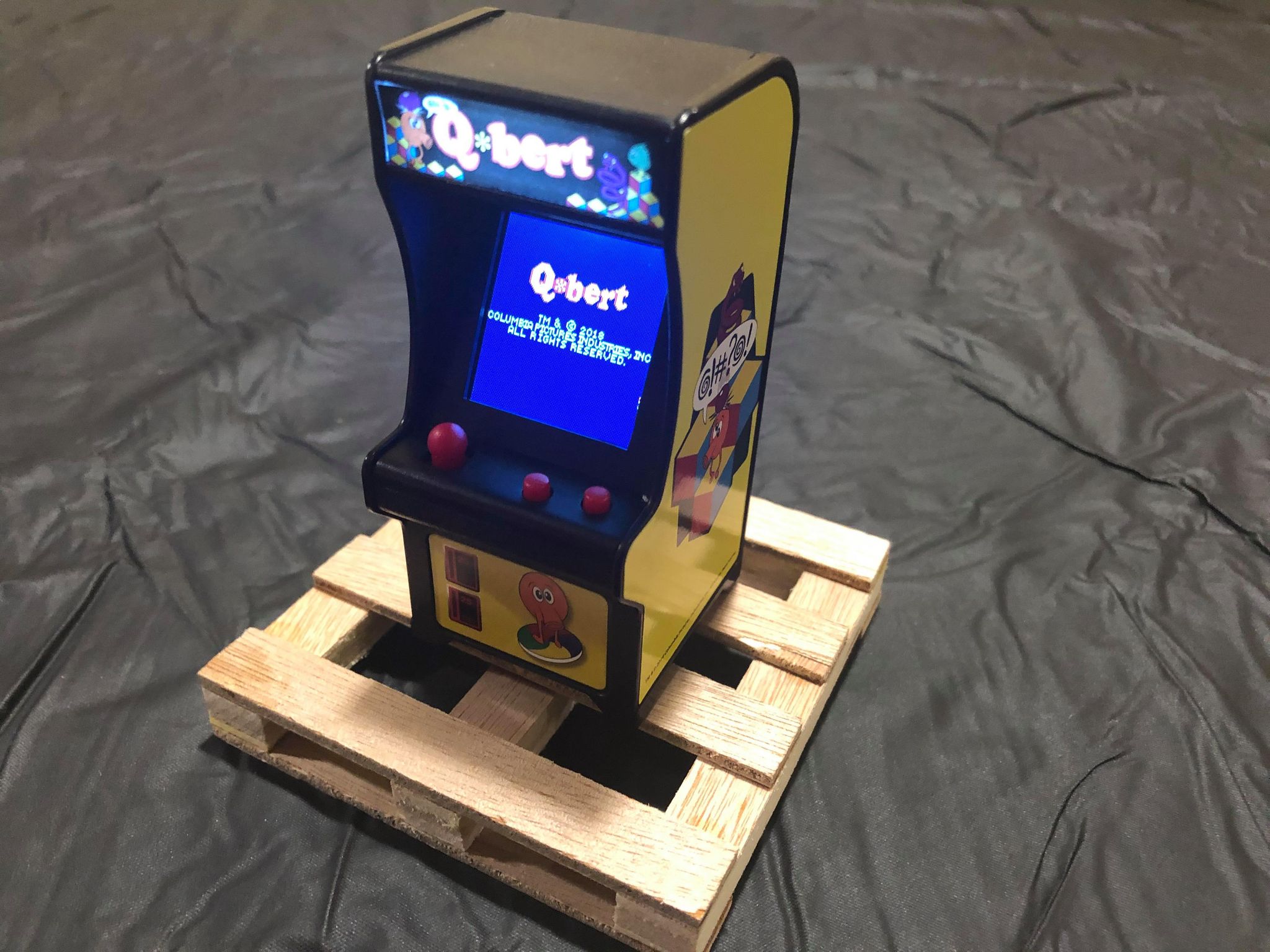 The upright they sent me was Q*Bert, and I’m sorry to say that no, he doesn’t make the kerplunk noise at the bottom of the cabinet when he falls down. That aside, this thing is remarkably accurate.

It’s the right color, and the marquee art is spot on. The side art looks right too, though it's placed a little further down than usual, probably because of the size of the unit. The joystick panel art isn’t there, and there is some art where the quarters would go that doesn’t exist on the original cabinet. All in all though, it’s a pretty adorable little arcade replica.

As for the display, it’s TINY. It’s supposed to be, but like the Game Boy Micro, it’s one of those things that’s hard to appreciate until you actually get your eyeballs on it. It’s hardly unplayable, but my 40-ish year old eyes weren’t exactly happy about trying to pay attention to something that small. That said, it’s not a bad image at all given the circumstances.

The screen is a legit screen, if that makes sense. This isn’t one of those crappy LCD games of old. It’s a tiny little Game Boy Color style screen (except backlit), and the game moves just like the arcade original.

Well, almost. I’m not sure if it’s the screen or the game itself, but the game doesn’t run quite as smoothly as the arcade original. It ultimately feels like the arcade game, with the timing seeming spot on, and the sound is perfect. But it seems kind of choppy, like it’s running at a lower framerate.

As you can imagine, playing it isn’t the most comfortable thing in the world either. It’s actually really impressive that this thing even works at all, but it’s pressing right up against the “they were so concerned about whether or not they could they didn’t stop to think if they should” department. It’s not terrible, but once the novelty wears off, it becomes very obvious that there are better ways to play Q*Bert. My kids think it’s really neat though!

Overall, I’m not sure I’d want to carry this around like a keychain, and the chain honestly only gets in my way, but all things considered, this thing is pretty darn neat. 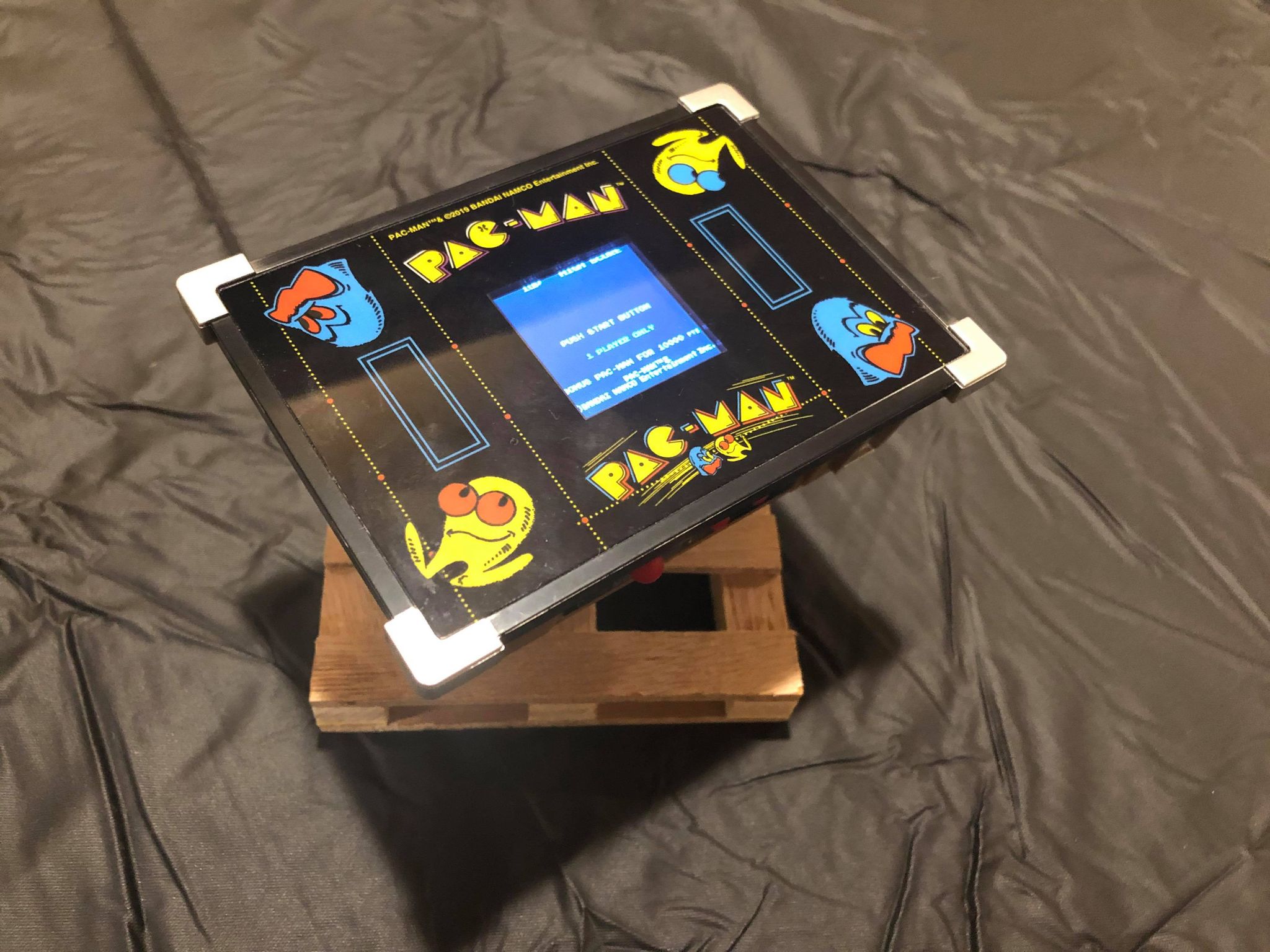 The tabletop unit they sent me was Pac-Man, and in terms of looks, this guy is a knockout. Given the inherent limitations of the size of the unit, and the fact that it’s actually playable, this thing looking as good as it does is very impressive.

Of course, I’ve never seen a Pac-Man cocktail unit that actually looks like this, so sure, the details are way off, but what’s here is attractive, and at least gives off the illusion of authenticity. If you’re a real stickler for details, that might drive you nuts, but otherwise you should be fine.

It doesn’t look like it at first glance, but the screen is actually the same size as the Q*Bert cabinet. It looks smaller because of the surface of the unit, but it’s not.

There are two things that make this particular unit a little worse than the Q*Bert one though. First, Pac-Man is a more fast-paced game than Q*Bert, so that framerate issue makes the game feel a lot more choppy than its actual arcade counterpart. Second, the placement of the controls is somewhat problematic.

I don't know how they could actually solve this problem, because the controls have to go somewhere, but I’ve never found this thing even remotely comfortable to play. It’s not awful or anything, but just like above, once that novelty wears off, well, it isn’t exactly hard to find ways to play Pac-Man. Here’s a video of me fumbling with it. (I was holding my phone in my other hand, so I was playing one handed). 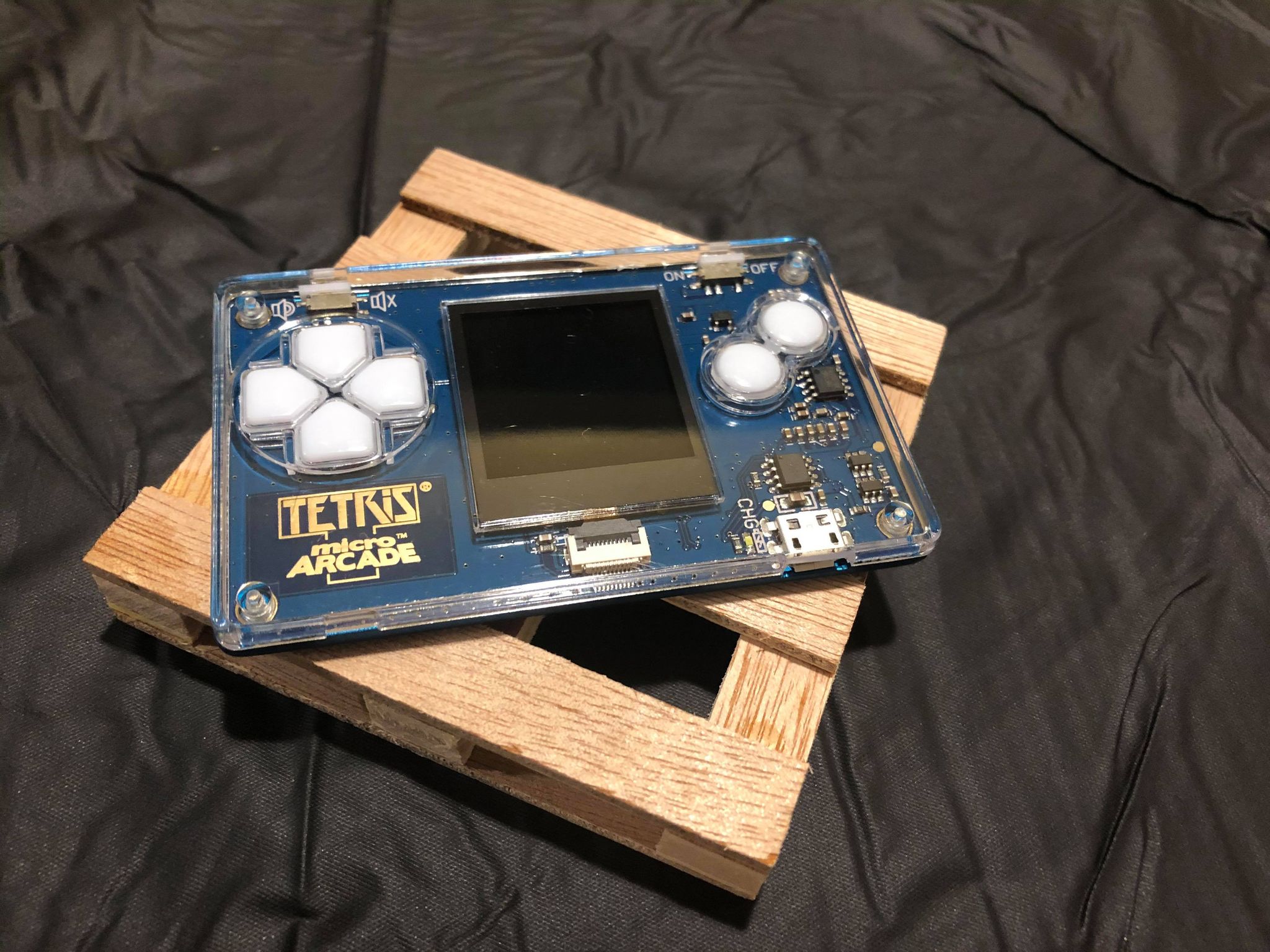 When I was a much younger man, I had a Tetris keychain called Tetris Jr. I adored that thing because it was this tiny little doodad I could play a functional game of Tetris on anywhere I went. And not tiny like a Game Boy or even a Game Boy Pocket. A legitimately tiny little screen about thesized of a postage stamp with buttons that worked for Tetris.

I miss that thing, but this thing is a suitable replacement.

It’s a bit larger than Tetris Jr., but not so much so that it isn’t reasonable to have around with you. It’s smaller than a Game & Watch, if that gives you a better idea of its size. The screen is the same size and style as the other units, but this little guy isn’t a port of the arcade version of Tetris. This seems to be a specific version made just for this item (or others like it) which makes me wonder if the upright cabinet Tetris game we have on our site plays this same game, or if it has the arcade version in it.

In terms of playability, it's pretty spot on. It controls well, and this is easily the most comfortable unit to play on since it doesn't have to adhere to the form factor of an arcade cabinet or cocktail table, two items that were never intended to be carried around in one’s pockets.

The only complaint I have about this is the sound. This sounds like an old Tiger LCD game. There’s a scratchy beep version of the Tetris theme we all know and love, which plays once before going silent and then playing various beeps for the game’s sound effects. It’s not a big problem, but considering that the other units I got played authentic arcade sounds and this sounds like an old Casio watch, it’s a little disappointing. 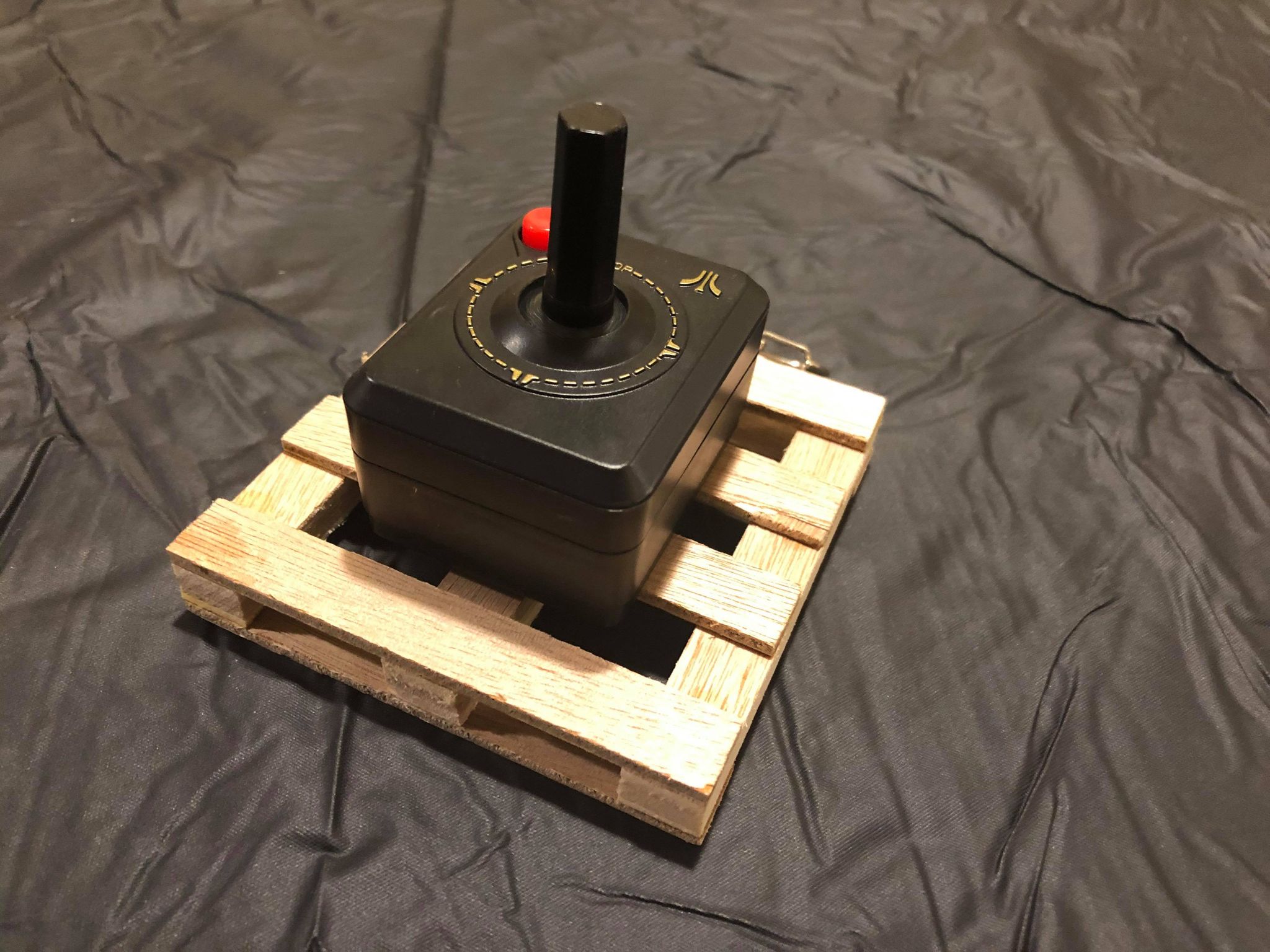 Finally, there’s this thing. It’s an Atari 2600 joystick that plays various Atari sounds. As far as I can tell, only one of those sounds is from an Atari 2600 game, with the rest coming from their arcade games. It’s a bit of a nitpick, but shouldn’t the Atari 2600 joystick only play 2600 sounds? (Yes, I know I’m a nut, but I didn’t buy the Donkey Kong arcade cabinet Hallmark ornament either because it played the NES game’s sounds, so yeah.) It’s still a neat little thing.

There you have it. These are neat. Really neat. They aren’t going to become your primary ways to play these classics, but they’re really cool looking things to place on a shelf, and while the novelty wears off pretty quickly, it’s quite a testament to how good these games are to begin with that it’s really easy to get sucked into playing them for way longer than you’d think you want to.

They aren’t perfect, they're cool enough to make that not matter.