When Runner 3 came out earlier this year, the reviews were pretty troubling. The previous 2 runner games were flat out obsessions for me, and especially after Runner 2 turned out to be one of my all-time favorite games, my hype levels for Runner 3 were unreasonably high. So when the game dropped and other Runner fans said things like “It’s good, not great” and “It’s the biggest disappointment of 2018” I was more than a little concerned. That concern continued after I downloaded the game and came to understand why people were saying what they were saying. Now, though, I think I may have changed my mind. Runner 3 is really, really good. 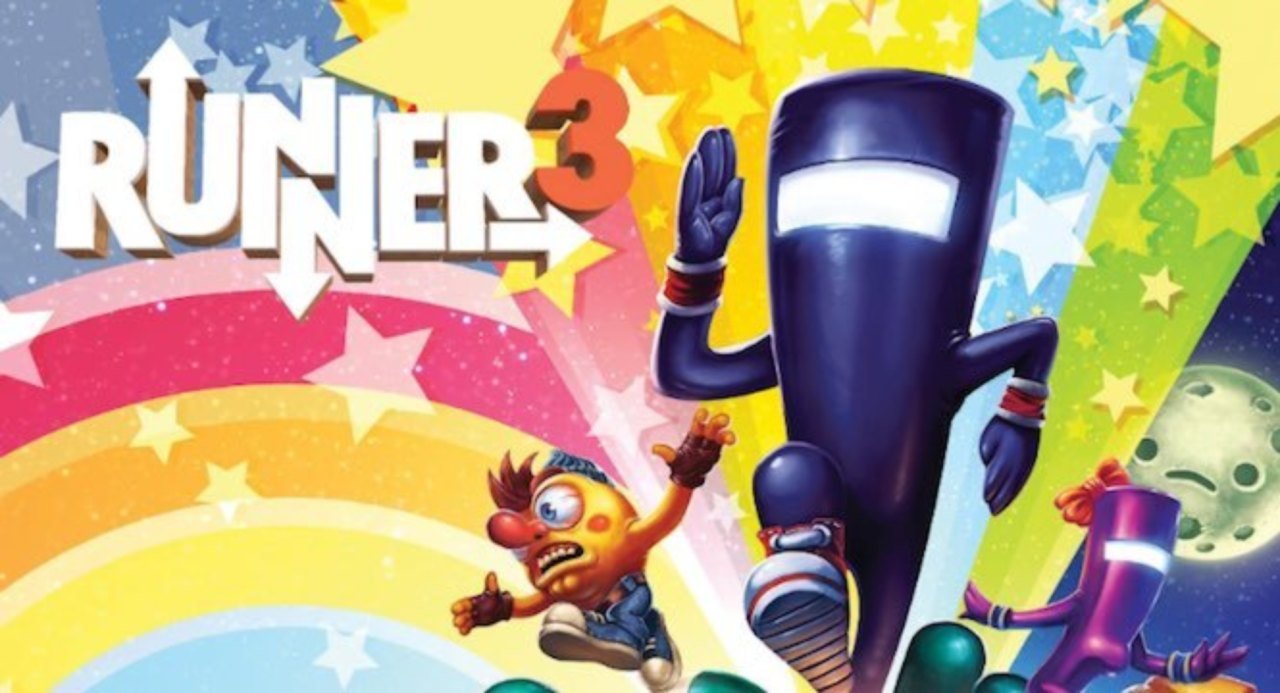 It’s easy to miss just how brilliant a lot of this game is at first glance. On paper, Runner 3 seems like a pretty huge step backward for the series. Bit.trip RUNNER had 3 worlds, Runner 2 upped the ante with 5, but then Runner 3 feels anemic by comparison by returning to just 3 worlds. And honestly, this is a valid complaint. One of the coolest things about Runner 2 was seeing all the weird stuff these worlds had to offer. Running through the incredible sights and sounds of places like The Emerald Brine, The Supernature, and especially the stunning stages of the Bit.trip, were amazing. The imagination of the folks over at Choice Provisions is something else. So when I heard we’d only be visiting 3 worlds in the new game, I was taken aback. Those worlds had better be impressive.

Well, they were, but I didn’t realize how much so my first time through. There is a LOT going on in these worlds, but more importantly, there are a ton of secrets. There are so many moving parts and branching paths that if you’re a longtime Runner fan your brain isn’t necessarily trained to look for. And each of those branching paths provides an unexpected amount of variety. There may only be 3 worlds, but what’s here is shockingly packed. 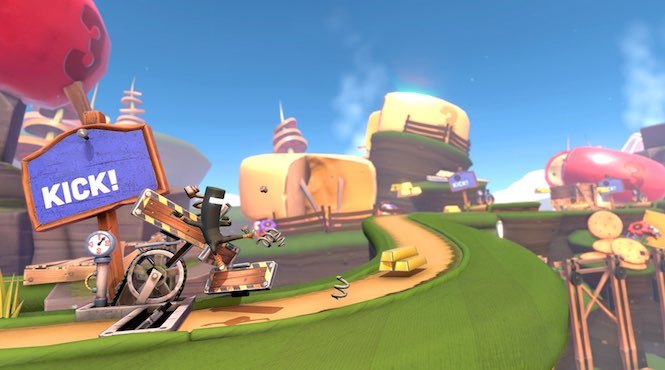 The way this was explained by the game’s official blog was that they wanted to add a lot of replayability to the stages. The developers want you to want to revisit the same stages multiple times to see what else you could find. Each stage presents you with what’s called a Gold Run. That’s where you play the stage like a traditional Runner level and try to collect all the gold bars. But when you beat a stage, that unlocks a Gem Run, where you get to travel along different paths and collect 25 gems instead of 100 gold bars. The way this is presented in the game turned me off pretty quickly. It’s felt to me like it was encouraging me to hit up the Gem Runs right afterfinishing off a Gold Run, and that to me made things feel pretty repetitive. My first time through, I did the first 2 stages like this, but after that I decided I had absolutely no interest in the gems anymore. It just didn’t feel different enough, especially after just having spent multiple tries getting all the gold. I decided the best plan was to just beat all the levels with just the Gold Runs and call it a day. Thing was, all the unexpected other stuff I found along the way started adding up, and by the time I beat the last boss, I couldn’t wait to go back to the beginning and try out the Gem Runs. 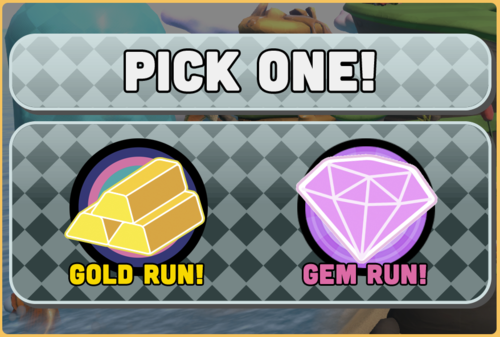 See, the gem runs aren’t the only other things in the game. There are also Hero Quests. These are where you find hidden paths along the way and meet some really weird characters. They task you with finding collectibles in other levels which get marked on your map. These things don’t exist until you find the hero quest though, so you can’t go looking for them until you are asked to. Then you go play through the levels again looking for the items. This sounds terrible on paper, but it’s far more fun than I thought it would be. You don’t actually have to complete the levels to get credit for finding the items. Once you get them, you can quit right out. You can even die. Doesn’t matter. Once you touch the collectible, it’s yours, and that makes this whole fetch quest bit not just tolerable, but downright enjoyable. It’s just the right amount of challenge.

But wait, there’s more! There are also puppets hidden around. The game’s story is told via these delightful (and bizarre) puppet shows. Just like the hero quest items, these puppets are marked on your map so it’s easy to tell which stages you have to start searching and which ones you’ve already found. Once you collect all the puppets in a given world, you’re treated to another chapter in the unfolding saga. They’re narrated by Charles Martinet, and they’re simply fantastic. And speaking of Martinet, he’s all over this game. He’s even an unlockable character! 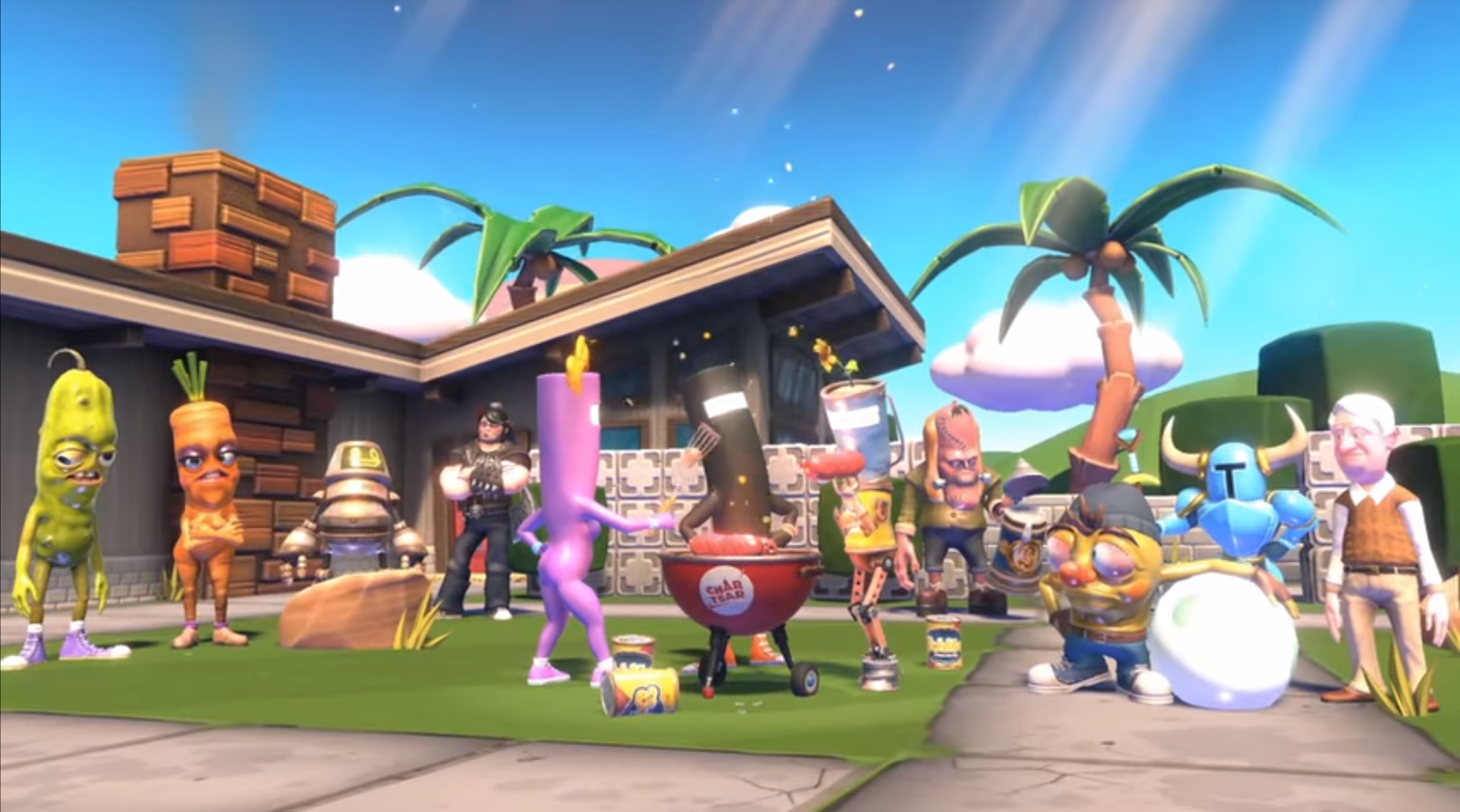 Finally, you have these character medallions. I found exactly one of these things on my own, and I was completely mystified by it. They aren’t marked on your map, and the game itself tells you almost nothing about them. But they’re hidden in some really incredibly clever places. I looked them up online, and thanks to the fine folks on Reddit, I was able to track them all down. Even after being told where they are hidden, it was still quite an accomplishment getting them.

As of this writing, the only things I have left to do in the game are the Retro Levels and the Impossible Levels. These bits are definitely some of the game’s low points, especially the Retro Levels. Mechanically, they’re perfectly sound. I’d even go so far as to say they’re kind of fun. But, there are much better super-challenging platformers out there, and since you have direct control over CommanderVideo while you’re there, these stages are decidedly un-Runner. They’re not bad, I guess, but they’re not what I’m here for. And it certainly doesn’t help that I don’t like the music in these stages even a little. Let me be clear, I’m only referring to the music in the retro levels. The music in the main game is beyond amazing. It’s at least as good as what was in Runner 2, and that’s one of my all-time favorite. The Runner 3 soundtrack is available on Bandcamp. Go buy it. But back to the point, the retro levels are, well, just weird. The same music plays over and over throughout all the stages in each world, and it’s just so… uninspired. I’m probably going to go through the rest of the retro levels before I declare myself done with the game, but I’m not itching to play them the way I was about getting all the puppets and Gem Runs. 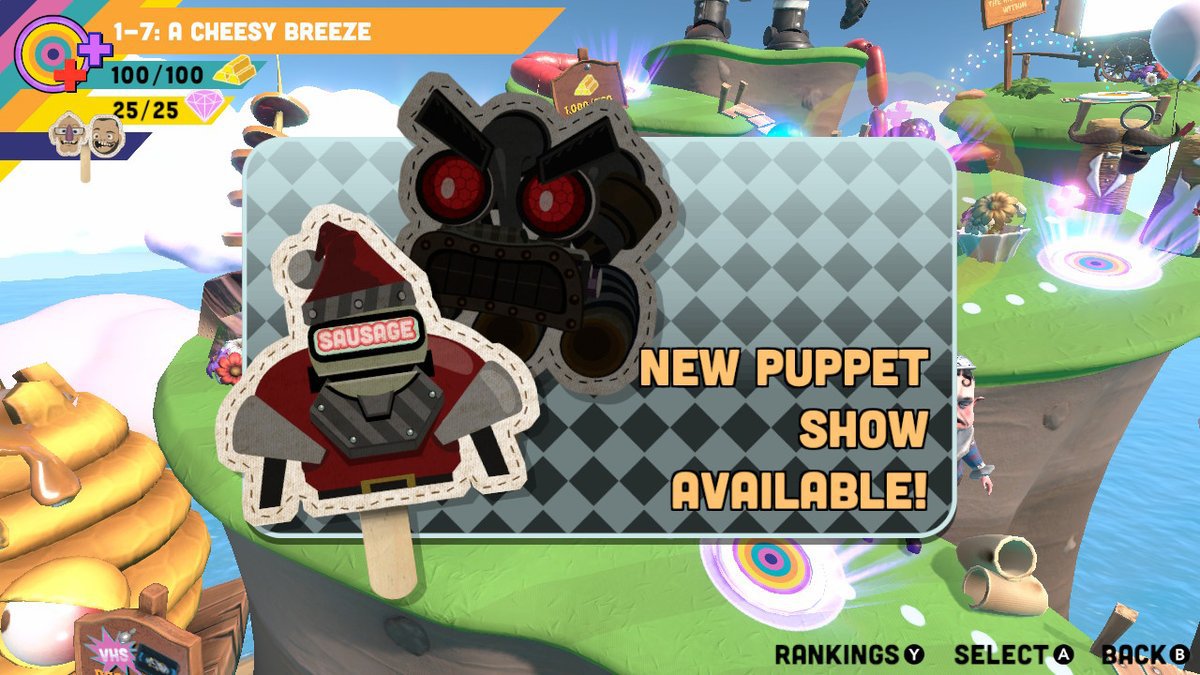 Then there’s the Impossible Levels. These things I certainly don’t begrudge the game for having, but they go a little far beyond what I’d consider a fun challenge. They’re completely insane, and they each have their own gold and gem runs as well. I’ll never be able to say I’ve 100% completed this game because I will never, ever be able to complete all these Impossible levels. I got a perfect Gold Run on the first one, and that’s all I have in me. I’ll still try from time to time, but much like the B-sides and C-sides in Celeste, I can’t see myself taking the time to actually pull this insanity off. It also kinda sucks that they all look and sound the same. 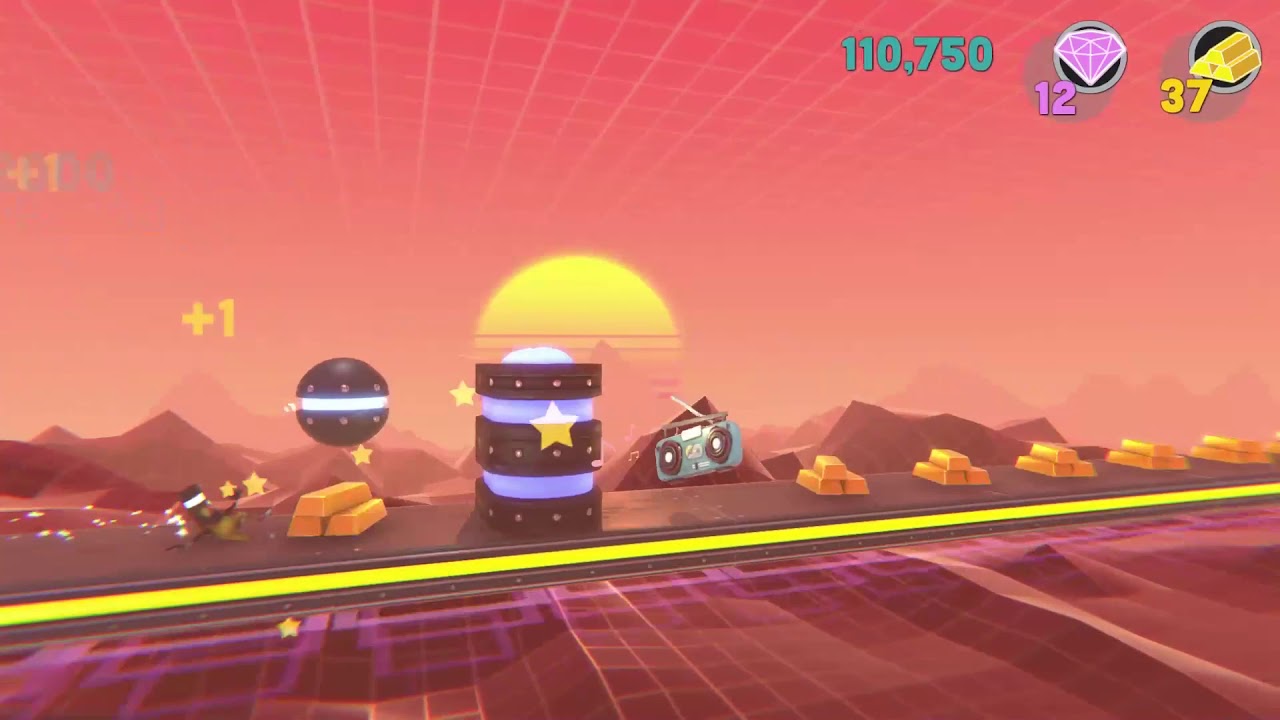 In the end, I think most of the review scores this game got were pretty fair. There are some real issues with it. The difficulty is pretty unfair at times. Many times you won’t lose because you did anything wrong, but because you hadn’t played the game before and you didn’t know the ground was going to fall out from underneath you at that specific time. The loading times are borderline unacceptable too. There are some speed issues where things don’t always run as smoothly as you’d expect, some iconic franchise sound effects (like the spring board) are absent, some stages feel a little too long, and the vehicle segments range from super fun to “oh crap, not this again.” That said, I didn’t expect to become as obsessed with Runner 3 the way I did. Runner 1 & 2 both completely ruled my life when they came out, and I was really bummed when Runner 3 didn’t grab me the same way. But then it did, and I couldn’t be happier about it. 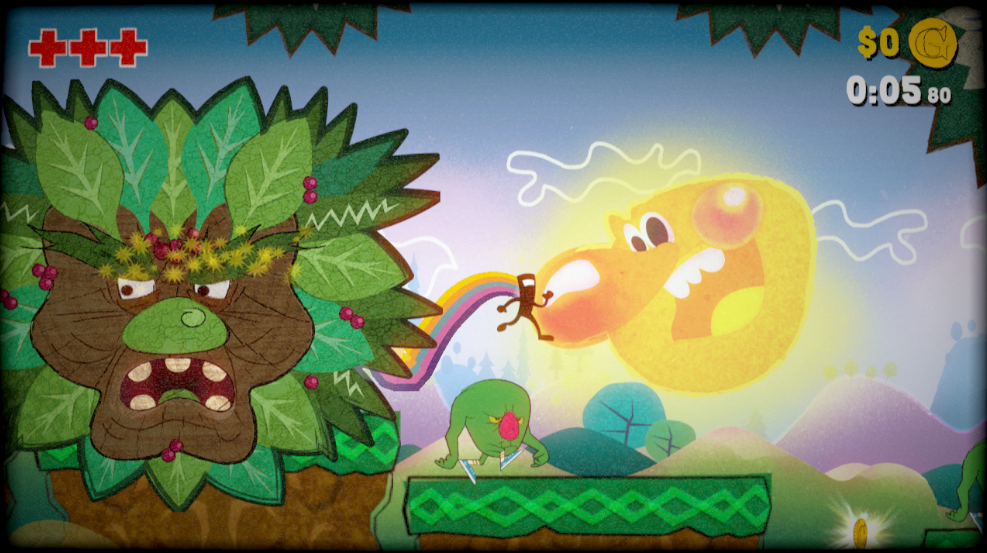 I still wish I could recommend this game to everyone, but its crushing difficulty stops me from doing that. Still, if you can push through it, and learn the game’s rhythm, it’s incredibly rewarding. It may still be a big disappointment when you consider the difference between Runner 1 & 2, (and the fact that aside from the final boss battle, the Bit.trip is nowhere to be found) but this disappointment is still one of the best games I’ve played in recent memory, and considering how many great games we've seen in lately, that's pretty darn good company.