Pinball video games will always be a little off. It’s pretty much impossible for a video game to ever completely capture the feel of playing a real, tangible pinball machine. That’s not to say they’re all bad, far from it. Pinball games that don’t try to aim for realism are usually pretty cool, like Kirby’s Pinball Land or Metroid Prime Pinball, but those are a different animal. Old pinball simulations like Atari’s Video Pinball and Midnight Magic or Pinball for NES that aren’t based on actual tables are super cool too. But again, different animals entirely. It wasn’t until relatively recently (and I do mean relatively in the much grander scheme of video game history) that pinball video games have made the bold attempt to actually recreate real life pinball tables to play on your video game console of choice. One of the most prolific of those is FarSight Studios’ The Pinball Arcade, and right now, that particular scene is looking pretty bleak.

FarSight Studios has always struck me as a developer that’s in a little over its head. Their hearts are clearly in the right place. These folks absolutely do what they do out of a deep love and respect for pinball. I don't’ mean to disparage them in any way, but their ambition has always seemed a bit higher than their expertise. This isn’t always necessarily a bad thing. It’s great to aim high when making video games. That said, for all the excellently detailed recreations of real-life pinball tables they’ve put together over the years, many of these games have been marred by technical difficulties and sometimes game-breaking glitches that have gone for extended stretches of time without being addressed. A quick look at their facebook comments section will point to full versions not booting up, tables with strange gravity mechanics that they promised would be patched (and still haven’t), and more. Still, even with those bugs running rampant, The Pinball Arcade, in my opinion, is still a pretty great package. When it works properly, it’s a really solid pinball simulation.

Quick story: When I was a kid, my family used to occasionally take vacations at a place called the Cherrystone Campground in Virginia. Some of my fondest memories of those trips involve the hours I spent in their awesome arcade. Besides the cool games I dumped a ton of quarters in, they had 2 pinball machines I played more than just about anything in the room, Taxi and Twilight Zone. The sounds of those machines will forever be etched into my brain in the best way possible. I love playing them so, so much, but I’ve rarely actually seen either of those machines since. The arcade at Cherrystone is basically a gutted hollow room of sadness now (my wife and I went there a few years ago and it was pretty brutal), and no arcades within a reasonable driving distance of me have either table. Yestercades in Red Bank has Twilight Zone, which I spend an inordinate amount of time on every time I go, but I haven’t seen a real live Taxi machine in over a decade. So when I found out The Pinball Arcade was a thing that existed and it had both Taxi and Twilight Zone available, I snatched it up immediately.

The version I picked up was for my Mac, because the version with Twilight Zone didn’t seem to exist on any of the consoles I had. That was certainly good enough for me at the time, but then I heard there was going to be a Wii U version. Honestly, I’m not even sure that ever came out. I remember keeping my eyes out for it, but I’ve never heard of an instance of someone actually having played it. I should probably check the eShop when I get home…

(Oh hey, it did actually come out for Wii U. Not all the tables are there, but the ones that are aren’t relegated to DLC packs. You can buy individual tables. That’s kinda neat.)

Anyway, after I got the thing, I not only played the ever-loving crap out of it as often as I could, but I started messing around with some of the other tables they had to offer. I had a blast. Sure, the physics were a little off from time to time, but it certainly beat not being able to play and hear those games at all, so I was happy. I eventually stopped playing it because playing games on my computer isn’t what anyone would call a comfortable experience, but I knew that if I ever really wanted to get my Taxi fix, all I had to do was pull up a chair and have some fun. Then, not too long ago The Pinball Arcade actually came out on Nintendo Switch, and I freaked. I immediately bought the first season pack that included 22 tables, Taxi and Twilight Zone among them, and I couldn’t put the darn thing down. Not only was it super cool to finally get to play these tables on my big TV, but I could pick up the Switch and turn it sideways in handheld mode. It’s a spectacular way to play these games, and I love it to death. My son got really into it too. He was particularly enthralled by Black Hole, and it sparked an interest in actual pinball for him. With that in mind, and my wife also enjoying the heck out of it, I decided it was time for me to maybe bite the bullet and drop another $35 on a second season of tables. I saw that one of them contained 2 Doctor Who tables, and since my wife is a HUGE Doctor Who fan, (she was obsessed with the original show as a kid) that season seemed like a great way to get something on the Switch the whole family would get a kick out of. But when I went to buy the pack, it wasn’t there…

I thought there must have been some sort of internet connection problem, and just decided to put the purchase off until the next day. While at work though, I checked The Pinball Arcade Facebook page and I came across this message.

A licensing issue? I immediately assumed it was related to the use of The Who’s Tommy as the theme song when you start up the game, but for as many folks asked what the actual reason for the removal was, FarSight never answered. Regardless, I’m a patient guy. I’d just wait till the game came back up on the eShop and buy the pack then. No rush. I was still having plenty of fun with the tables I had. No big deal. But then a few weeks went by with no word on a resolution, and I started to get a little concerned. Given FarSight’s track record with updates, I started to worry that the game might never show back up on the eShop. I would be bummed about not being able to buy more tables, but since the whole thing was removed, the image capture feature stopped working too, and I like posting my measly high scores on the internet. It’s fun!

Then, the other day, the big bomb dropped. 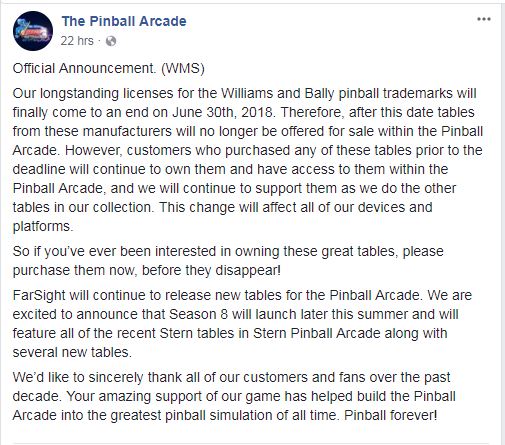 Ouch. I’ll give them credit for trying to toss some silver linings at the situation, but upon further inspection, this news is pretty devastating. After a day or so of fans asking all manner of questions, The Pinball Arcade released the following statements. 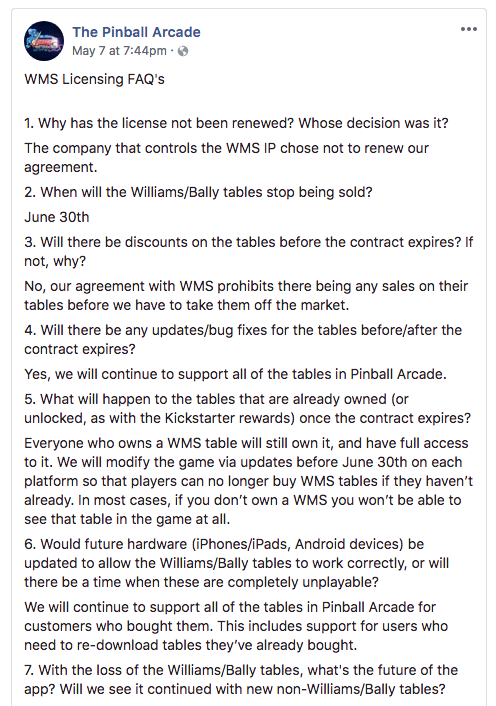 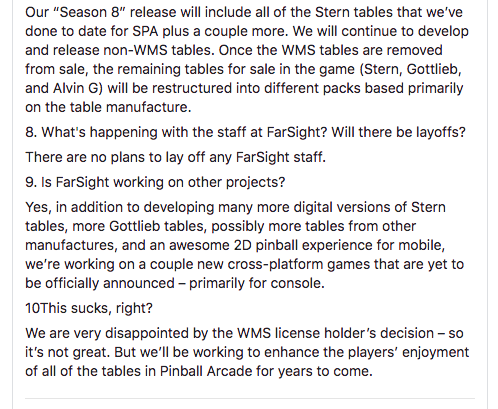 And last but not least, the real killer. 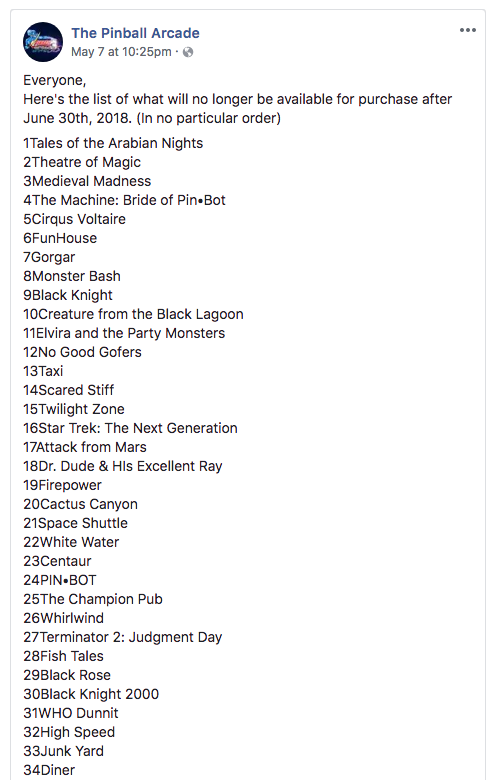 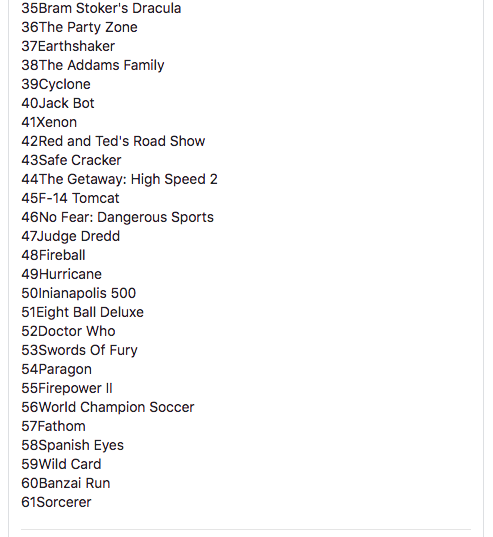 That’s brutal. If my math is right (and it usually isn’t) that’s well over half of the tables they have, and easily the majority of the best ones on offer. Not only that, but Switch owners don’t even get these last few weeks to pick up the remaining tables. The game isn’t going back up on the eShop until after the license is dead. Other platform owners still have time to stock up on any tables they've been on the fence about, so that’s certainly a good thing, but playing these tables in handheld mode on the Switch is now something only a select few will be able to do, which is a real shame.

As much as I respect FarSight for what they’ve done with these digital pinball tables, my hope now is that someone else will have the license for these tables and put out a new collection of their own. Maybe even someone a bit more technically savvy than FarSight. I’m not sure how likely that is, but I’ll be the first to admit I don’t know a ton about who holds the rights to these tables, so there isn’t a whole lot of a point to me venturing a guess. Still it does leave the question of where they go from here. Will adding their Stern tables to TPA proper be enough to keep them afloat? Will they seek out some Data East, Jersey Jack, or Sega tables now to fill the void? Will the license just magically come back to them in a year or two? Difficult to say, but I'll be keeping my eyes on it. I'm in the camp that really likes The Pinball Arcade, so I'm rooting for FarSight to be alright.

So, if you like pinball and you have access to a platform that runs The Pinball Arcade, now’s your last chance to pick up digital versions of some of the best pinball machines ever made. And if you do decide to pick it up, don’t pass on Taxi. It’s freaking great.