E3 is usually all about what new games are coming. This year though, I noticed what seemed like a larger than usual focus on some retro content. Sure, that kind of stuff’s been presented at E3 for ages, but I can’t remember a time when there was this much news focused on new old stuff. Honestly, it was pretty cool to see!

I think the biggest deal was the new “mini” arcade cabinets from Arcade 1-Up. These little things have garnered a lot of attention in the retro gaming community. They’re a really neat idea, but their physical quality leaves something to be desired. Of course, that’s also why they’re as affordable as they are. I’ve played with a couple of these things before and I can confirm that the physical quality isn’t exactly what I’d call arcade perfect. The ones I messed around with were the Street Fighter and Rampage machines. They’re perfectly functional, but the joysticks feel flimsy, like they wouldn’t hold up to a whole lot of use. Of course, these are designed for home use, not for public consumption (abuse), so I guess in the end that’s okay. But another issue is the value proposition. Yes, these are way cheaper than buying an original arcade cabinet, but spending around $300 for 2-4 games seems a little steep. Then again, I guess it really depends on what those games are. 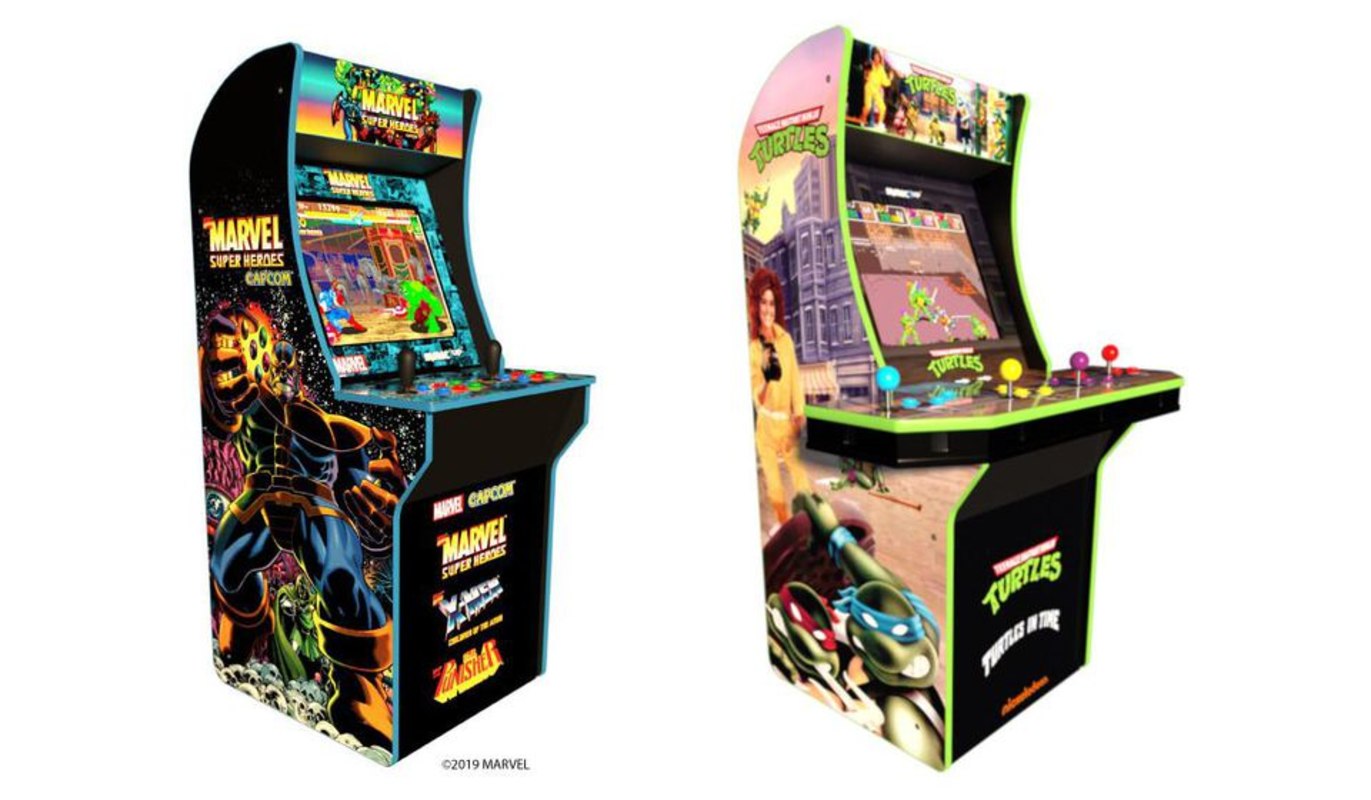 Take the new cabinets they announced at E3 for example. First you have the Marvel cabinet, which includes X-Men: Children of the Atom, Marvel Super Heroes, and The Punisher. On paper this seems like a pretty good deal, but for me personally, as much as I loved those games back then, I don't see myself actually playing them much now. Of course then you have the Teenage Mutant Ninja Turtles cabinet, and that’s a different can of wax. This one only has two games in it, but those two games are both of Konami’s TMNT games, TMNT, and Turtles in Time. These games aren’t super high on the regular replayability factor either, but they are really great to revisit, especially if you’ve got some friends over. It also has 4 joysticks and a wider space to house them than the 3 player Rampage unit which, in my opinion, is way too cramped to comfortably play with 3 adults. Dropping that kind of cash on just two games is bonkers, but as a collectors item, it really does look nice. Those games have wonderful attract modes, and the cabinet itself features the original game’s “wonderful” artwork. This was the first one of these things I’ve actually seriously considered purchasing. 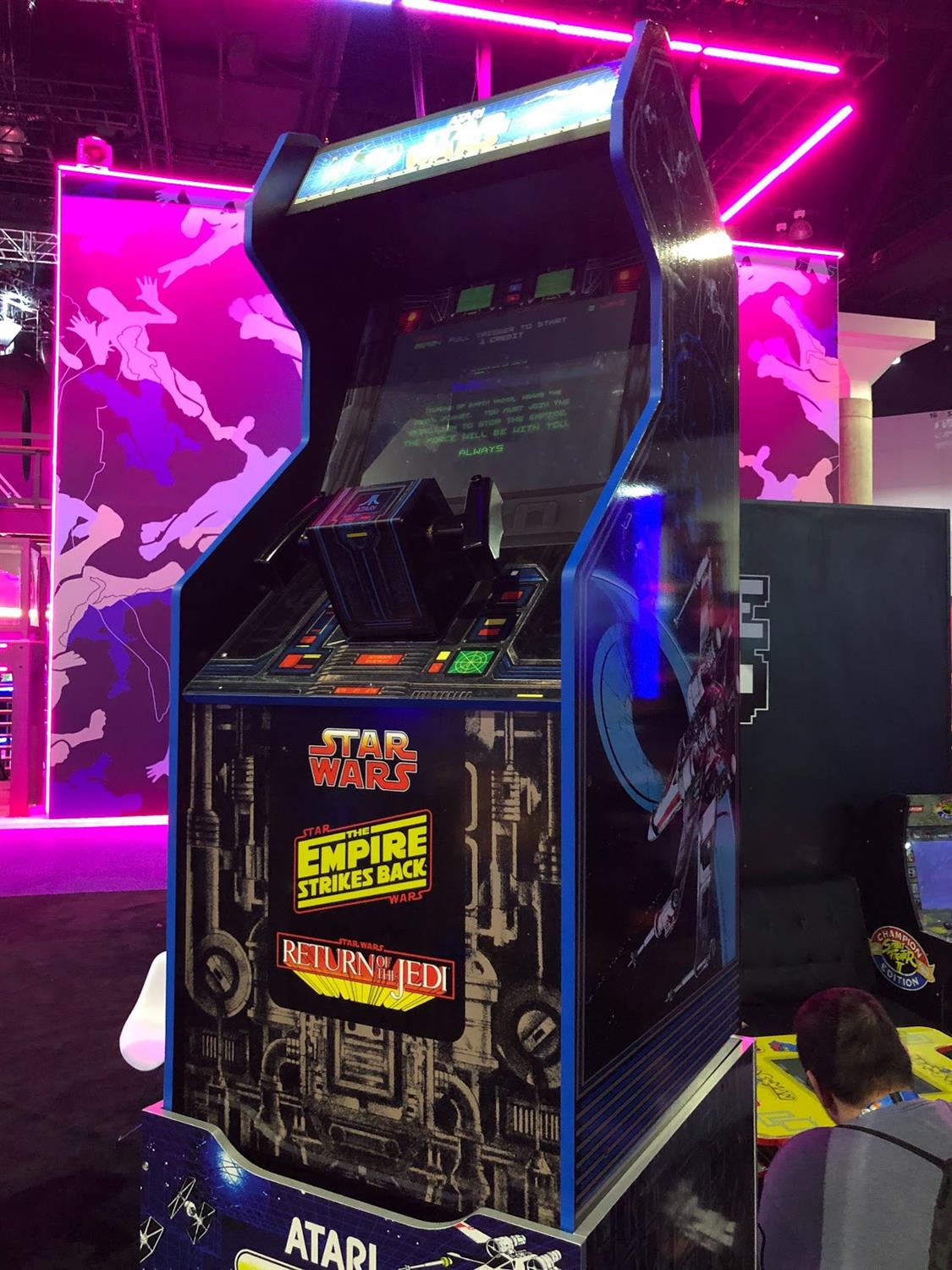 But then they announced the Star Wars unit and whoa, I don’t know if I can actually say no to this guy. It’s got the flight stick control thingy and everything. Most of the other games on these cabinets can be emulated in some form or another without losing much of the experience. But these games on a cabinet with that controller is a legitimately different experience, and a darn good one at that. The price is going to be something to pay close attention to, because I believe this one was announced to be “under $500” which is potentially $499. That’s definitely out of the whole “impulse buy” category, but I guess we’ll see. Because it looks amazing.

Konami had a few surprises in store at E3. Long-time fans of their games were delighted to see they were making some retro compilations a few months ago, and during Nintendo’s E3 Direct they not only announced that the Contra Collection was available now, but a brand new Contra game (of questionable quality, but hey, new Contra!) as well! They also announced the completely unexpected TurboGrafx-16 Mini. Tiny versions of retro consoles have been all the rage for the past few years, and it seems Konami is ready to jump on that particular train. Considering how well done their recent Castlevania and Contra collections were, it’s relatively safe to assume this little guy should function pretty well. And considering Konami owns Hudson, the company responsible for a considerable portion of the TG16’s library, it seems likely the game selection shouldn’t have much of a problem living up to its potential. Games are really where these things live and die. Both of Nintendo’s mini consoles sold like gangbusters because they had the right games on them. Sony’s PlayStation Classic, on the other hand, fared much worse, and that’s largely thanks to a rather unexciting game lineup. So far, Konami has announced six games for the unit; R-Type, New Adventure Island, Ninja Spirit, Ys Book I & II, Dungeon Explorer, and Alien Crush. Shockingly, they’ve also announced three distinct models. There’s the TurboGrafx-16 Mini, the PC Engine Mini, and the PC Engine CORE Grafx Mini. The only real difference that’s been detailed is that the Japanese model will have Castlevania: Rondo of Blood on it. Here’s hoping that comes to all territories as well. 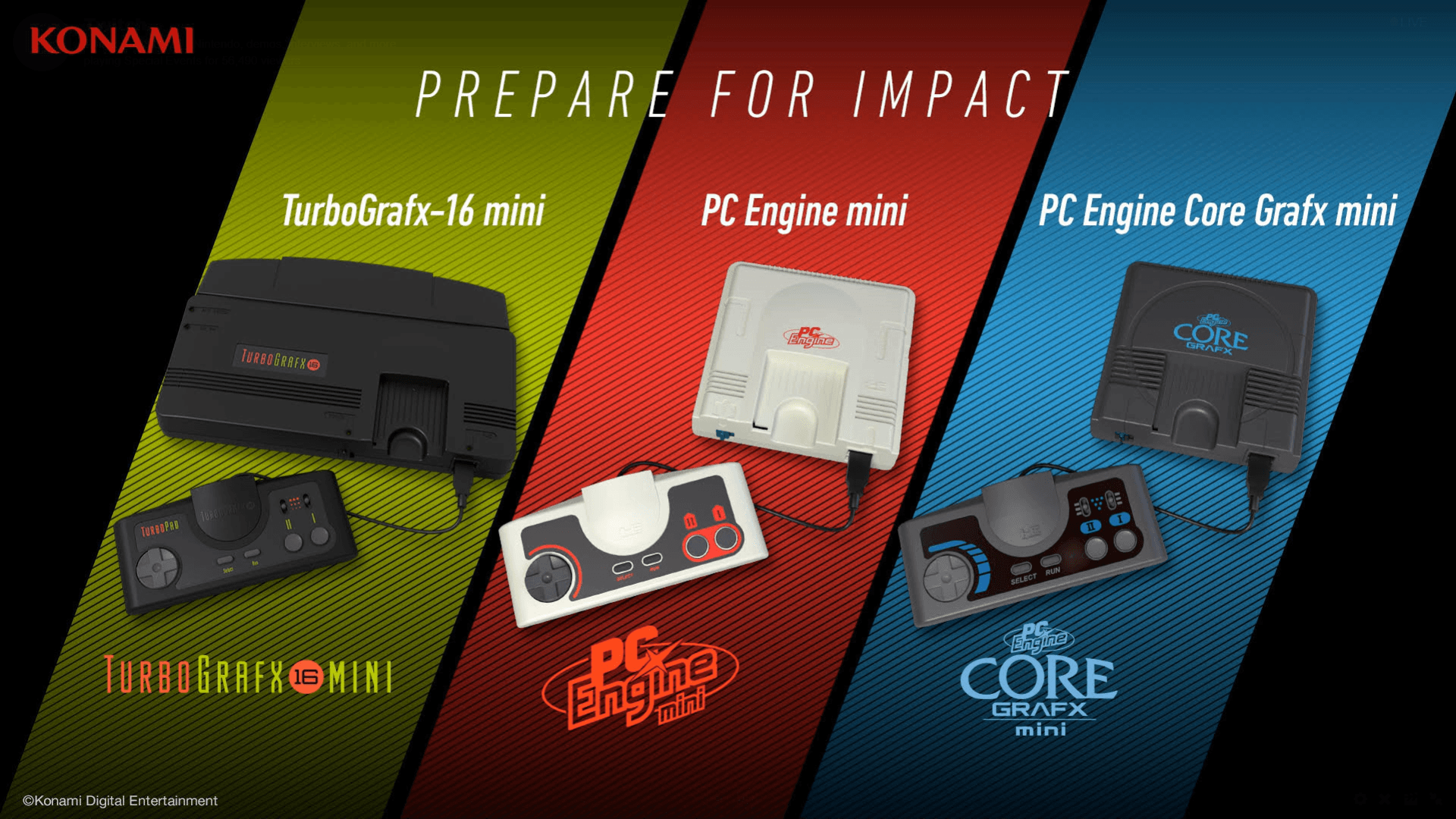 This is a strange move from Konami. The TG16 has a real cult following in the US, but it’s a far cry from Nintendo and Sega’s 16-bit offerings. It fared far better in other regions, but like the Commodore 64 Mini before it, this one doesn’t have the same mass appeal as the other units out there. I guess we’ll see if it can manage some success. I know I want one. 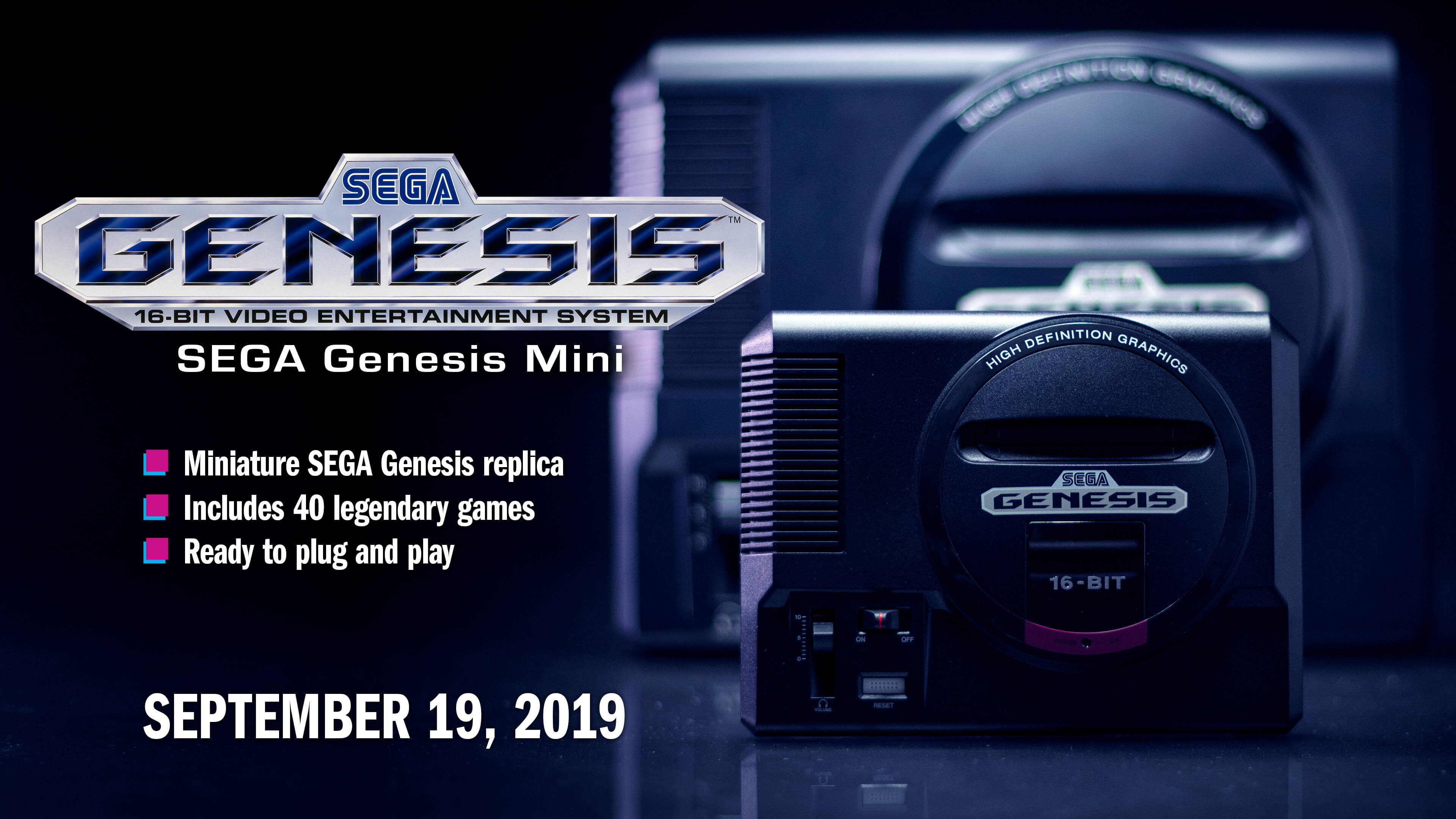 Speaking of mini consoles, Sega showed off their Genesis Mini running on the E3 show floor, and the impressions are very positive. We’ve covered its absolutely insane list of games before, so we already know this is one heck of a value proposition. The emulation is being handled by M2, so quality certainly isn't an issue either. This one seems like a real home run. It appears to be well-built, it’s got some of the Genesis’ very best games, including some expensive hits like Castlevania Bloodlines and Contra: Hard Corps, and oddities like the Sega Channel exclusive Mega Man: The Wily Wars, the unreleased Tetris by Tengen, and a brand new port of Darius. This thing is going to be wild, and it’s great to see these games finally re-released. 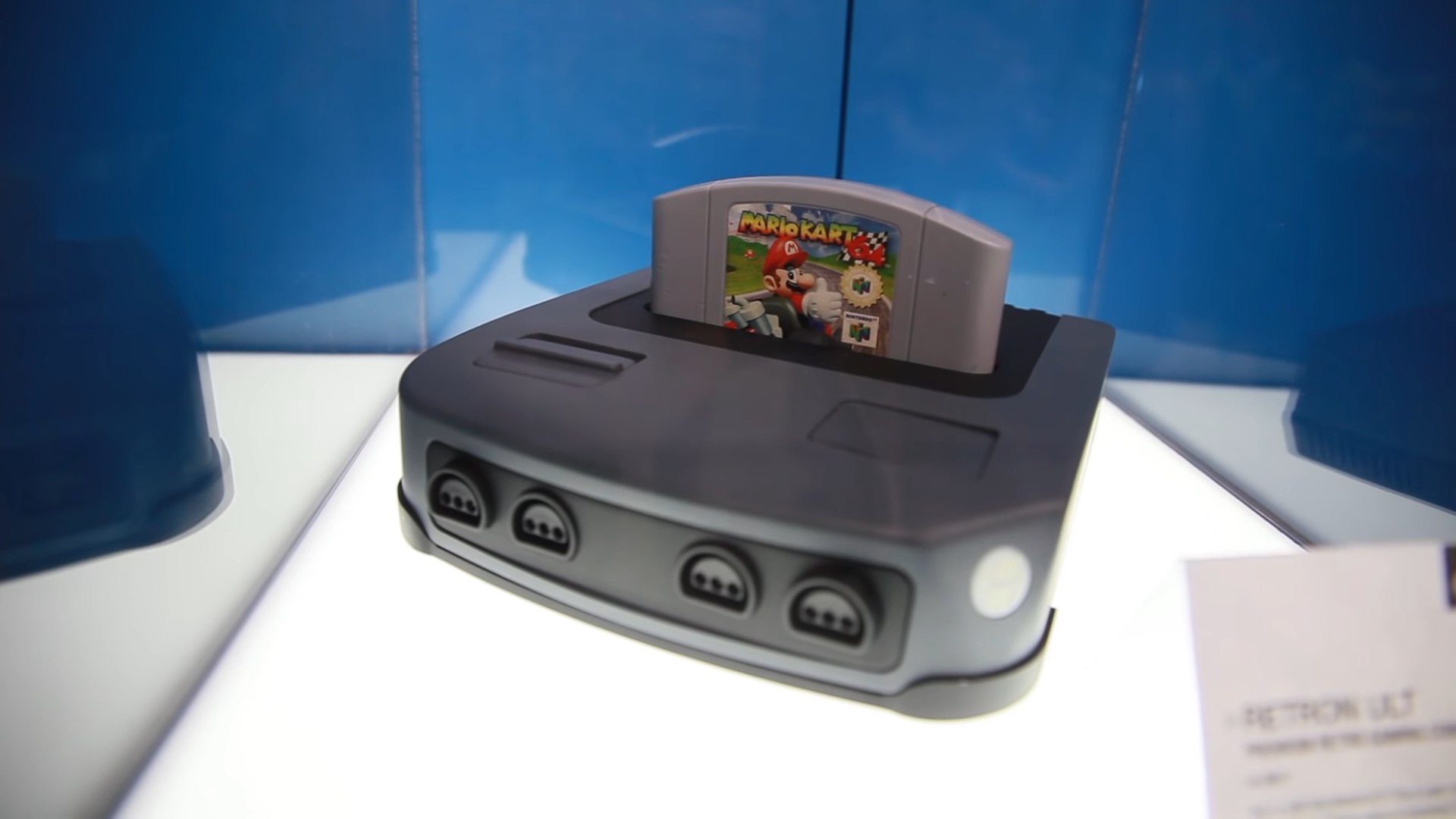 Hyperkin had their Retron ULT on display at E3, which is their new device that plays Nintendo 64 carts via HDMI. This is something people have been wanting for quite some time, and Hyperkin seems almost ready to make it a reality. I say almost because according to an interview, development on the unit still has a ways to go. The wording in the interview was pretty interesting too. They said it’s “compatible with N64 carts.” Not “plays N64 carts.” Not “all N64 carts.” Seems like a very specific distinction. This will be a very interesting thing to follow. Here's the interview I saw if you want to know more. 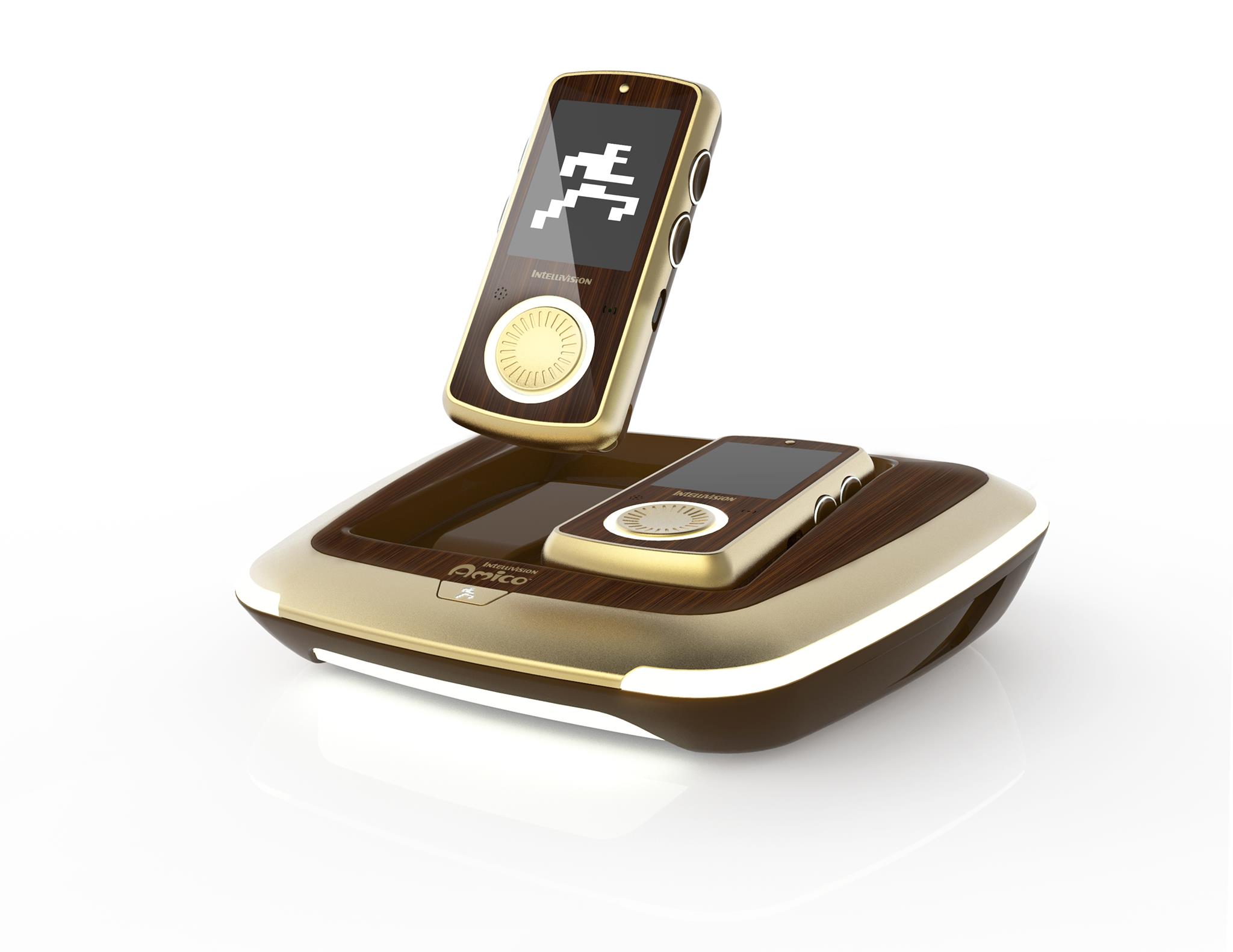 Apparently the Intellivision Amico was at E3, but it was only shown behind closed doors. This system is such an interesting animal. The whole concept of an affordable, exclusively family-friendly (all games released for it will be rated E) console is an intriguing one. But some of its PR has been, let’s say, questionable in the past few weeks. First they mentioned that the entire original team was back for a brand new Earthworm Jim, when in fact only 10 of the people who worked on the original games are involved. Then they showed off some new colors and an updated design for the system, which actually looks pretty cool. Then they showed off their new logo, which to my eyes is very unattractive. It's far more “Fisher Price” than “cool new piece of tech.” And then a few days ago, company spokesperson/owner Tommy Tallarico posted this strange article chastising the industry for glorifying violence at E3, even going so far as to call out that “Even the great Nintendo didn't stack up this year (from the article): ‘Only 7% of Nintendo's E3 Direct titles were non-violent, and only one of those was first-party: Animal Crossing New Horizons.’” So the adorable Link’s Awakening is too violent, but Earthworm Jim, who shoots a rabid junkyard dog with a blaster in the very first level of his original game, and the first title announced for the Amico, isn’t? I understand the point he was trying to make, and I think I see where his heart is when it comes to violence on the Amico and in video games in general, but this whole thought process surrounding this article is incredibly poorly laid out. I’m still rooting for this thing, but it’s getting harder to every time I see more. Here’s hoping we’ll get to see a game running on the thing soon. 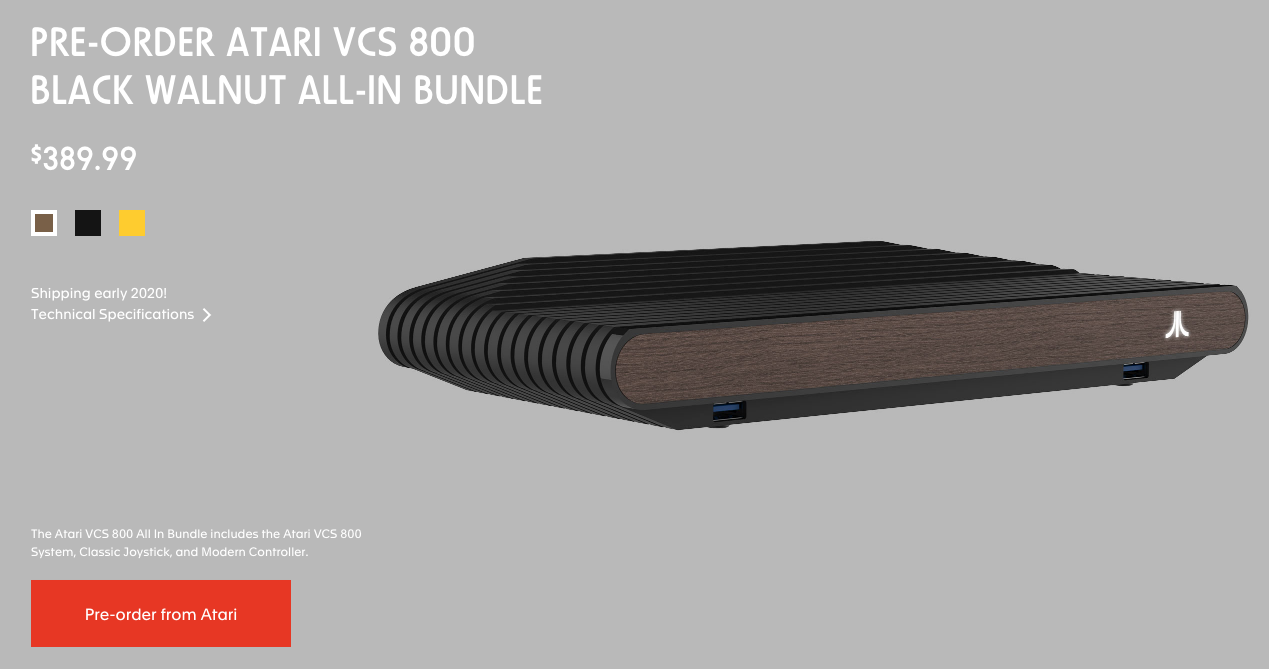 And then we have this… thing. Atari sent out an email saying that the Atari VCS was available for preorder now and, well, they weren’t wrong. You can certainly go to GameStop or WalMart and preorder the thing. What’s unclear is, to my knowledge, exactly why someone would want to do that. As far as I know there aren’t any exclusive games for it. In fact, it seems to just be a mid-range PC in a really stylish case. Not that that’s necessarily a terrible thing, but the marketing is very confusing here. It starts at $389.99, which is noticeably more than an Xbox One X or PlayStation 4 Pro. That’s going to be a very hard sell. I'm waiting for this to really be a thing, but when they sent out that email at the start of E3, I really expected them to have a presence at the event, and finally make an attempt to show the gaming world at large why they should care about the VCS. They didn't, and that's weird.

As always, I'm sure there were other announcements I missed, but even so, this was a lot of retro-loving goodness we got here. I'm excited to see where it all eventually lands.

Hopefully that Star Wars cabinet lands in my basement.