I’ve landed in a sort of weird area of video game collecting, video game music on vinyl. I love VGM, and I love listening to records. So it just makes sense, right?

My vinyl selection is pretty small, but it’s taught me some important lessons. Some vinyl records are made with more love than others. The first one I got set the bar VERY high for this kind of thing, but I quickly learned that different companies put a different amount of effort into their releases. In fact, it seems that some companies place way more emphasis on the novelty of the whole thing than the actual sound quality. They’re made for collectors, not necessarily for people who actually want to listen to the music.

This is a source of frustration for me because I’ve made a couple of purchases that are definitely worthy of being captured on vinyl, but the execution makes me not want to ever put them on my player again. In my opinion, the music itself is what deserves the most respect, and if you’re going to go through the trouble of getting a license to print video game music on vinyl, it should be treated in a way that makes for the best listening experience. Since that’s not always the case, and I haven’t seen too many VGM record reviews out there, let me break down what I’ve got and why I like and dislike it. 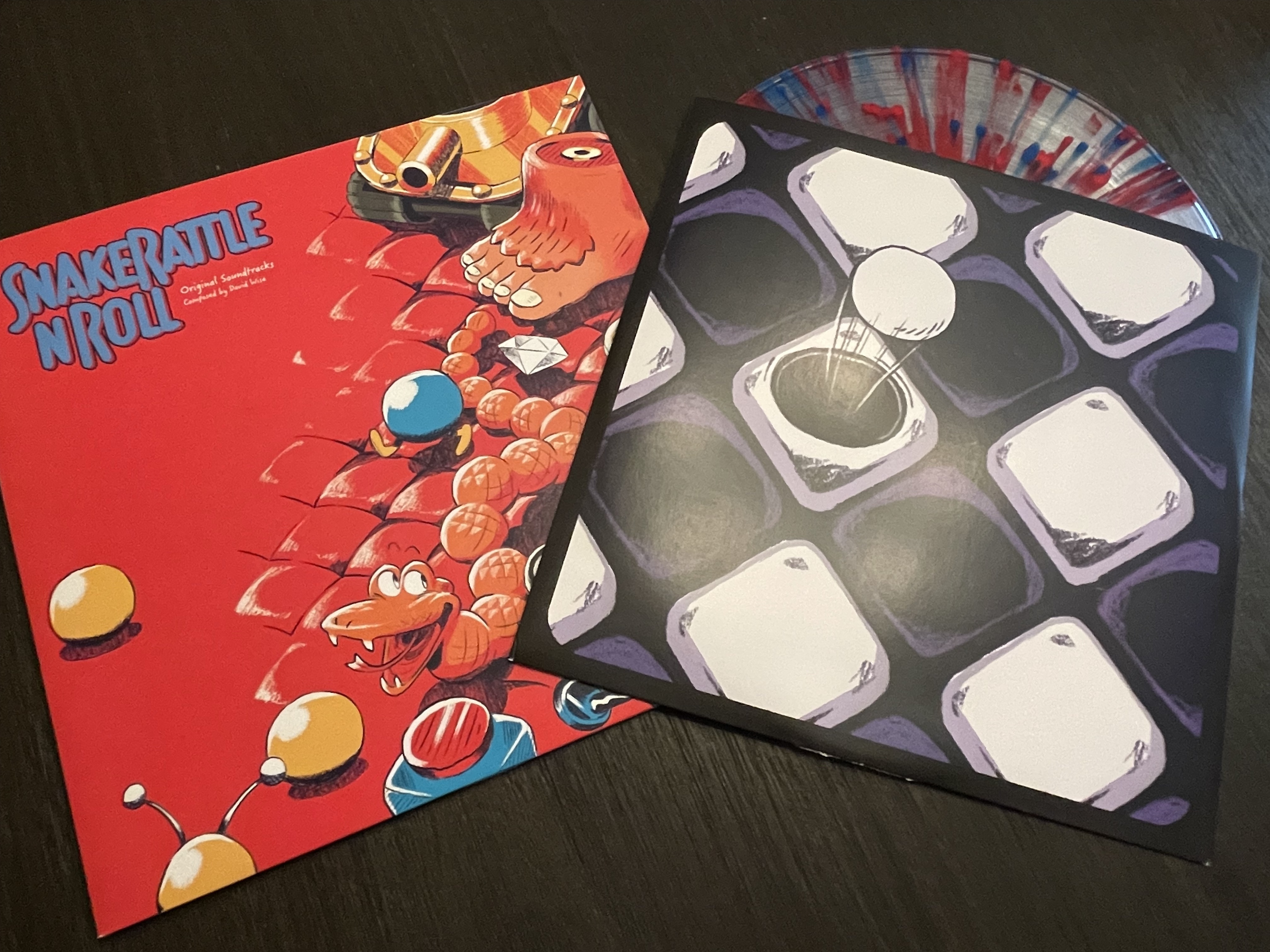 This was the first record I got with video game music on it, and it’s amazing. It’s a single disc with the NES music on one side and the Mega Drive version’s music on the other. The NES side does this weird thing where it plays the pause music between every track, and that doesn't necessarily make for the best listening experience, but I understand why it was done that way. Still makes for a weird listen.

The packaging is also absolutely stunning. The record itself is clear with this cool paint splatter going on, and the sleeve not only includes some breathtaking artwork, but also a brief interview from the composer, David Wise. It’s a fantastic package, and does the source material the most service I can imagine. Well done. I heartily recommend getting records from Fangamer. 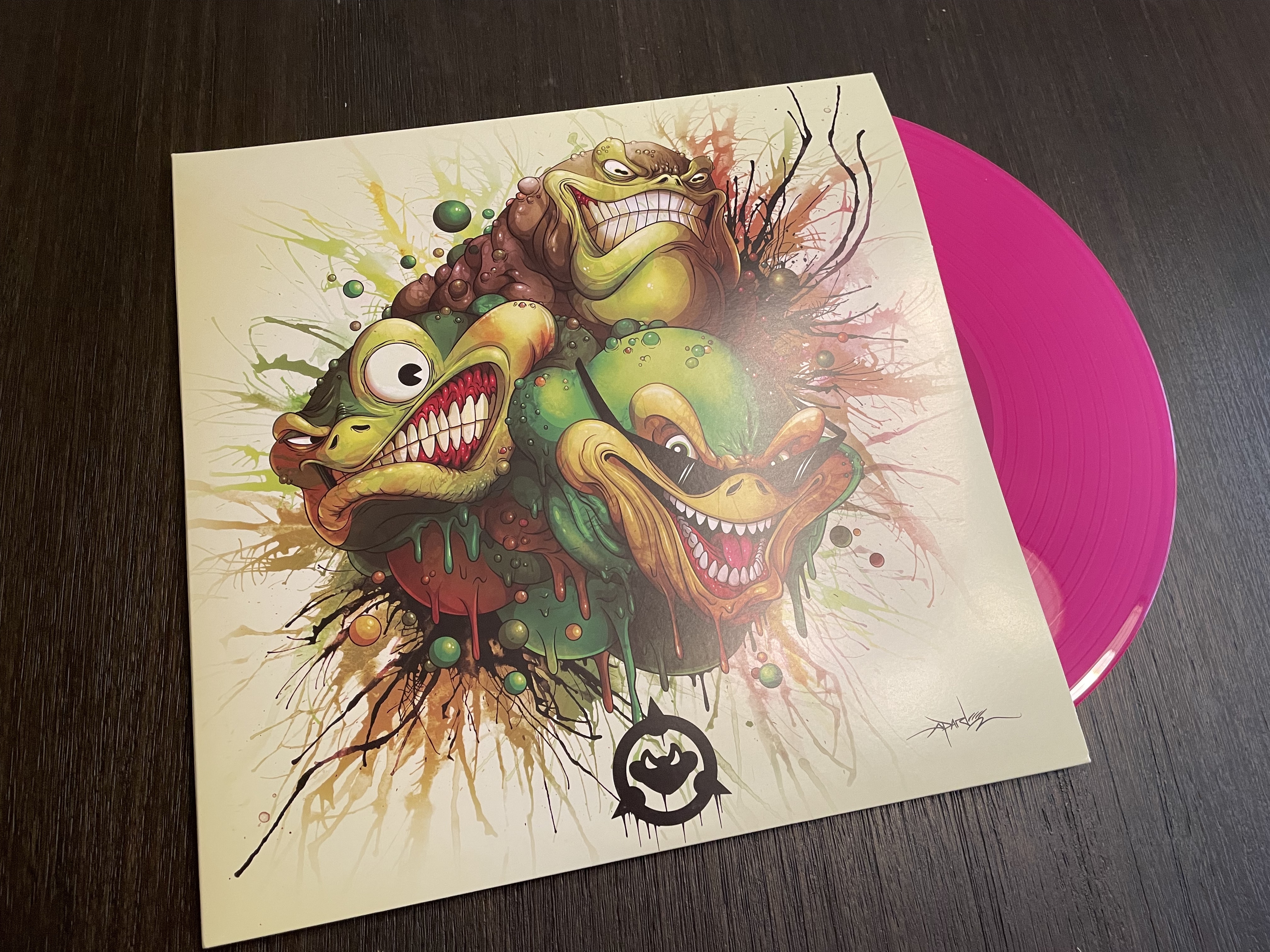 This is my first encounter with what I would consider “vanity vinyl.” This set includes the soundtracks for the original NES game and the new Xbox reboot. I can’t say I really cared all that much about the reboot stuff, but since the original game’s soundtrack by itself is out of print, I went for this one. The packaging is really great in concept. It has a pop up fist that punches at you when you open up the sleeve. Unfortunately, in practice, it doesn’t really work all that well. 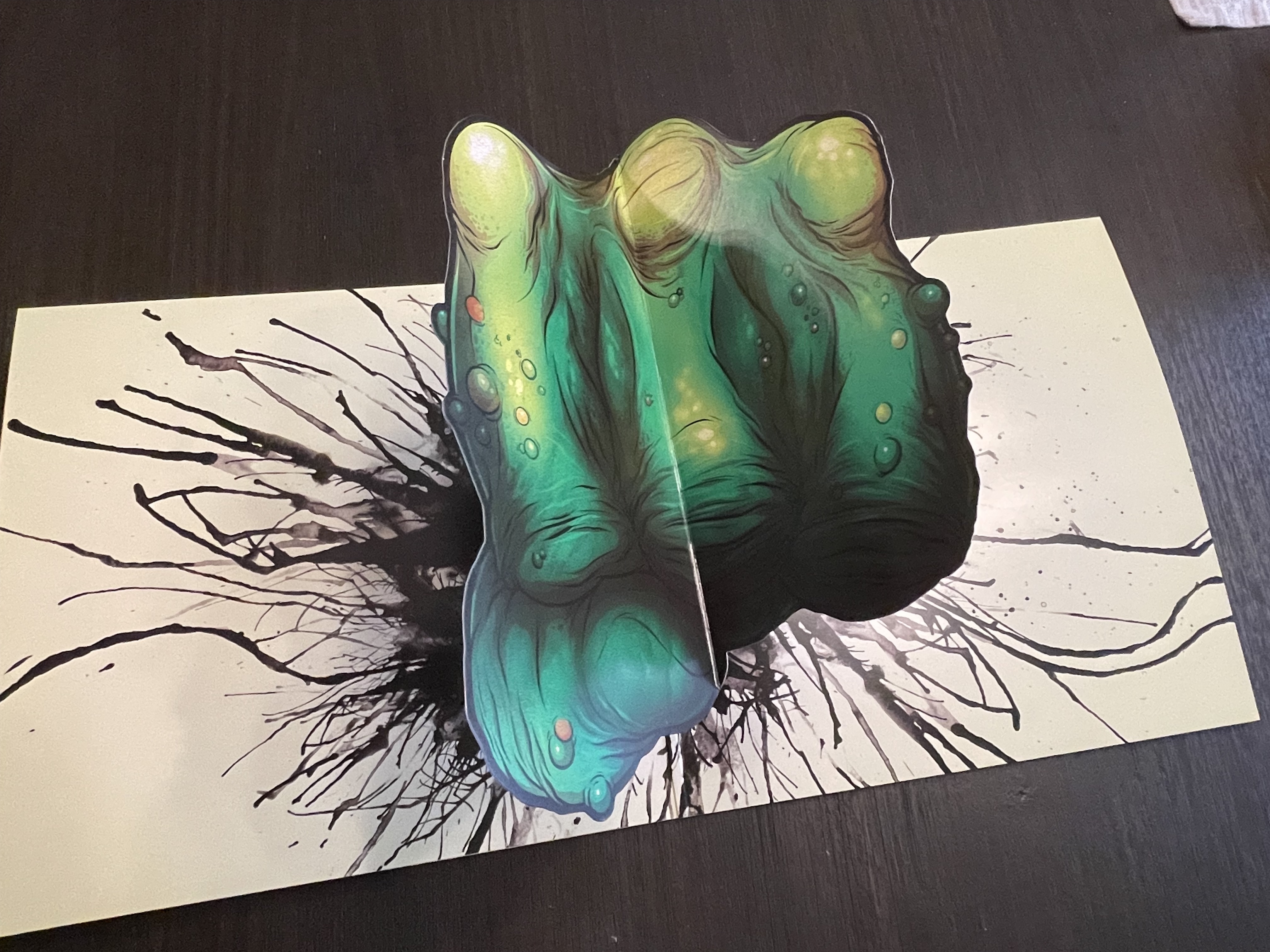 The fist kind of stays folded up because it’s made of such thick cardboard. Everyone I’ve ever showed it to has needed it explained to them. Neat idea, not so great execution.

The record itself sounds pretty good, except for one major issue. The last track on the first side is the game’s iconic pause music. At first, I thought there was something wrong with my disc, but after countless emails and several replacement discs from Iam8bit, it was concluded that what was happening was actually intentional.

What you’re hearing there (sorry for my kids talking throughout the video) is an attempt to make the pause music loop infinitely until you flip the record over. The problem is, it doesn’t work. They created this dent in the record to make it skip so the music loops, but the loop is in the wrong spot, so it doesn’t sound like the music is looping, it just sounds like the record is skipping. Like the sleeve, this was a neat idea, but the execution falls flat. It’s just one track, but it’s such a memorable one to mess up.

The only conclusion I can draw here is that they were more concerned with the novelty of their ideas than the actual usability of the product. I’ll be much more wary about buying any more vinyl from Iam8bit going forward, which is a huge bummer because they have some absolutely incredible soundtracks under their umbrella that I would LOVE to have, like Sayonara Wild Hearts, The Messenger, and Donut County. Those are all currently out of print, but if they ever make them again, I’ll have to think hard about whether or not to risk getting anything from these guys again. 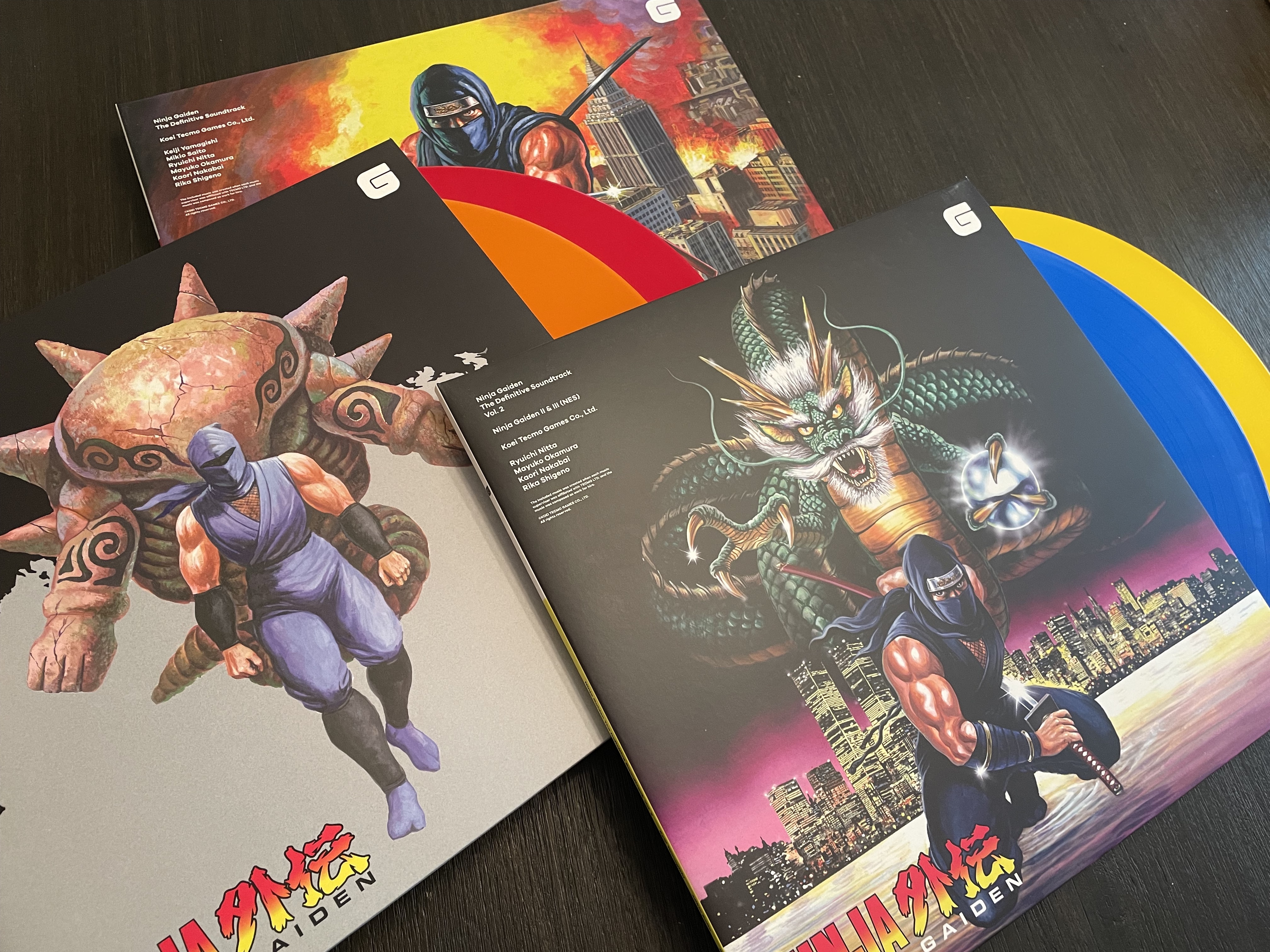 Back on the good side of things, we have these Ninja Gaiden soundtracks from Brave Wave. They were bundled together by Limited Run Games, which came in this gorgeous box with a full interview book detailing how the composers came up with their respective soundtracks. It includes the original arcade release and all three NES games. The sound quality is very good, and the records themselves look nice. They’re all solid bright colors. I can’t say I have any real complaints other than not really liking the arcade soundtrack all that much, but it’s worth having so I could have the other 3. What amazing music. 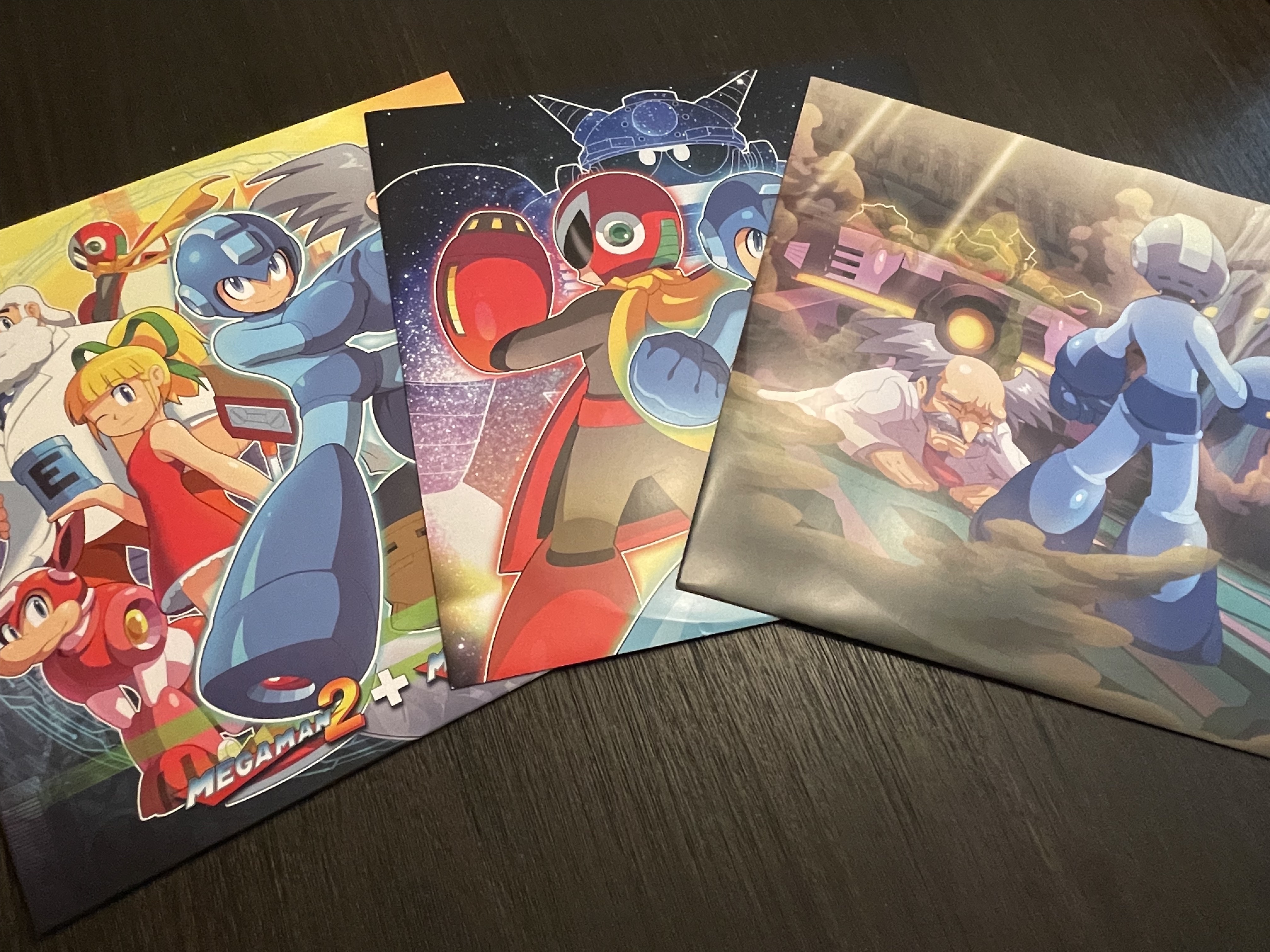 This one’s a real heartbreaker. Again, I can’t shake the feeling that these were produced for the novelty of having the music on vinyl instead of being properly mastered for the format. The packaging is gorgeous, featuring some absolutely breathtaking original artwork. Seriously, look at this. 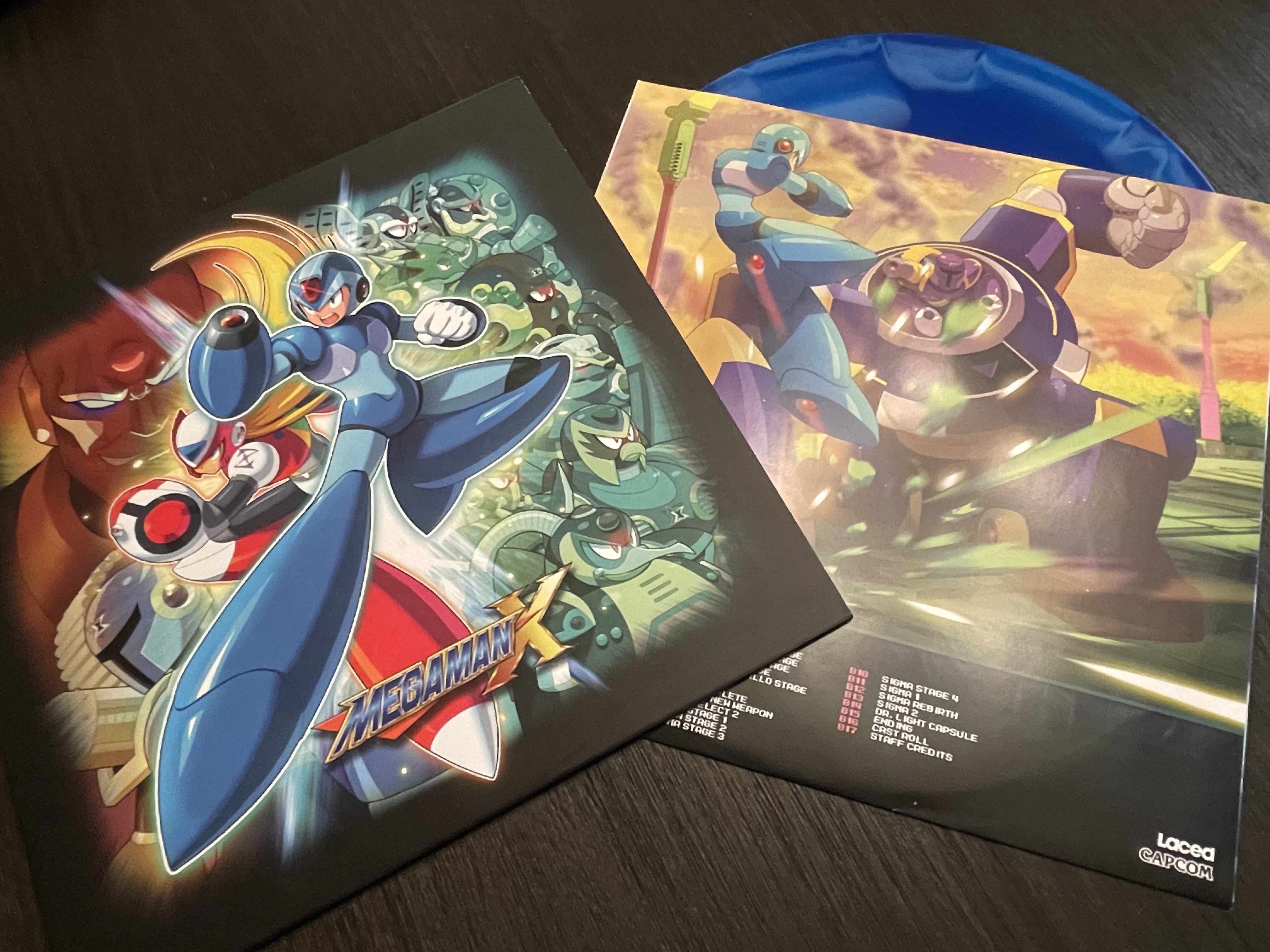 The discs themselves though… kinda not great? In the pictures on the site they look super cool, but both the first run and replacement discs I got from them (more on that in a bit) look pretty bad. Like the splatter effect didn’t work right when they were pressing them. 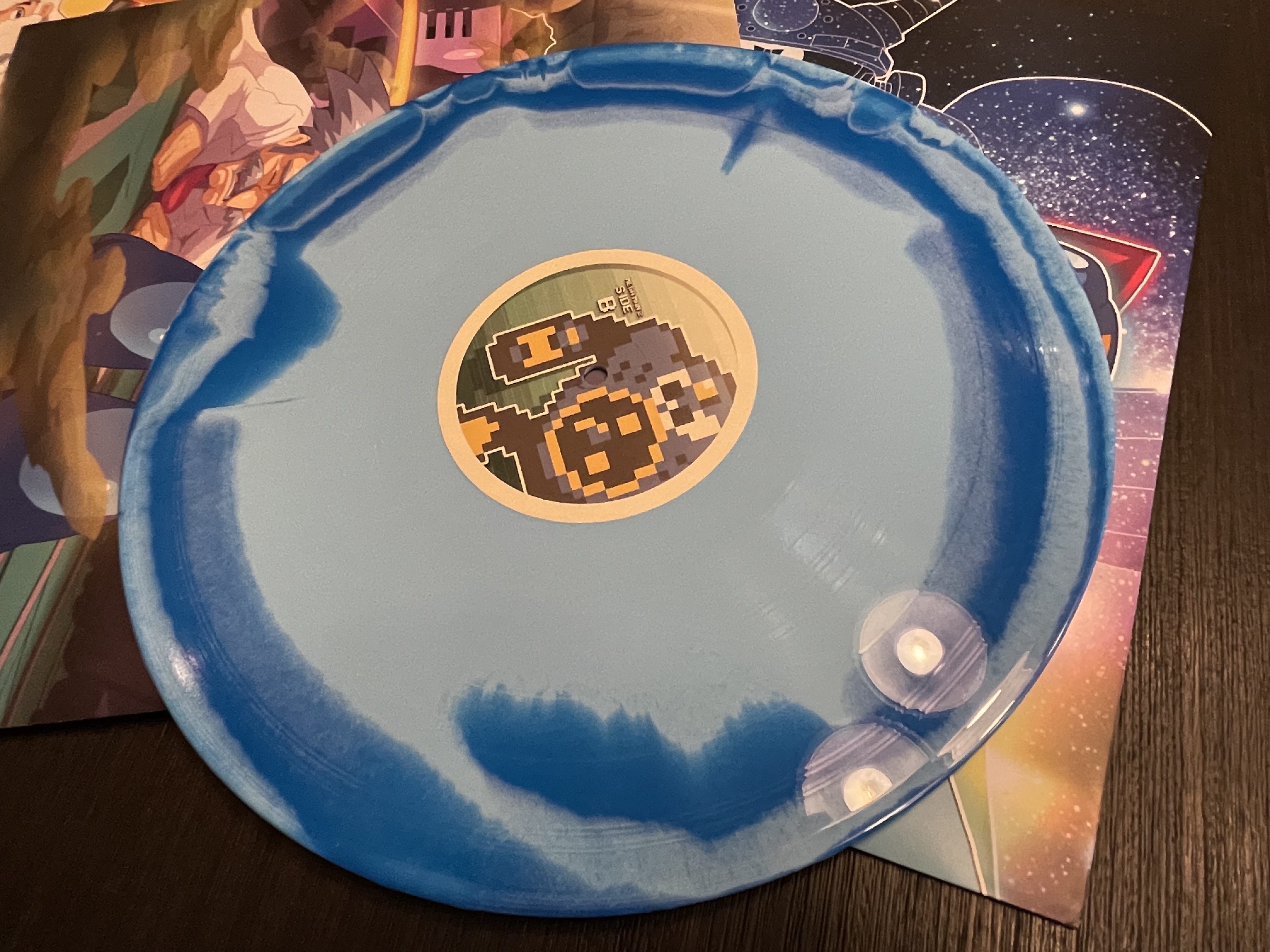 Anyway, the real problem here is the sound quality. On all three discs I got, Mega Man 2, Mega Man 3, and Mega Man X, the music starts out sounding more or less okay, but the closer you get to the center of the disc, the more “crunchy” it sounds. Especially in the case of Mega Man 2. The sound quality on the Mega Man 2 disc is just bad. The sound is constantly peaking, and sometimes the notes themselves are so distorted it sounds like they aren’t even playing on time. I feel like I lack the vocabulary to properly explain what I’m hearing, but it doesn’t sound right. This one sounds better coming out of my CRT than this record.

After asking me for some information to initiate my return, they didn’t respond to my emails for over a month. I eventually got their attention on Twitter and they sent me a replacement disc right away, but it sounds exactly the same as my first one. I thought maybe there was something wrong with my specific disc, but the other one sounds exactly the same. I can’t imagine anyone listening to him and thinking it was okay to go out to people who actually wanted to listen to it.

They also have a standard black version and I can’t help but wonder if the black one would sound better. Either way, I will definitely think twice before ordering from Laced Records again. 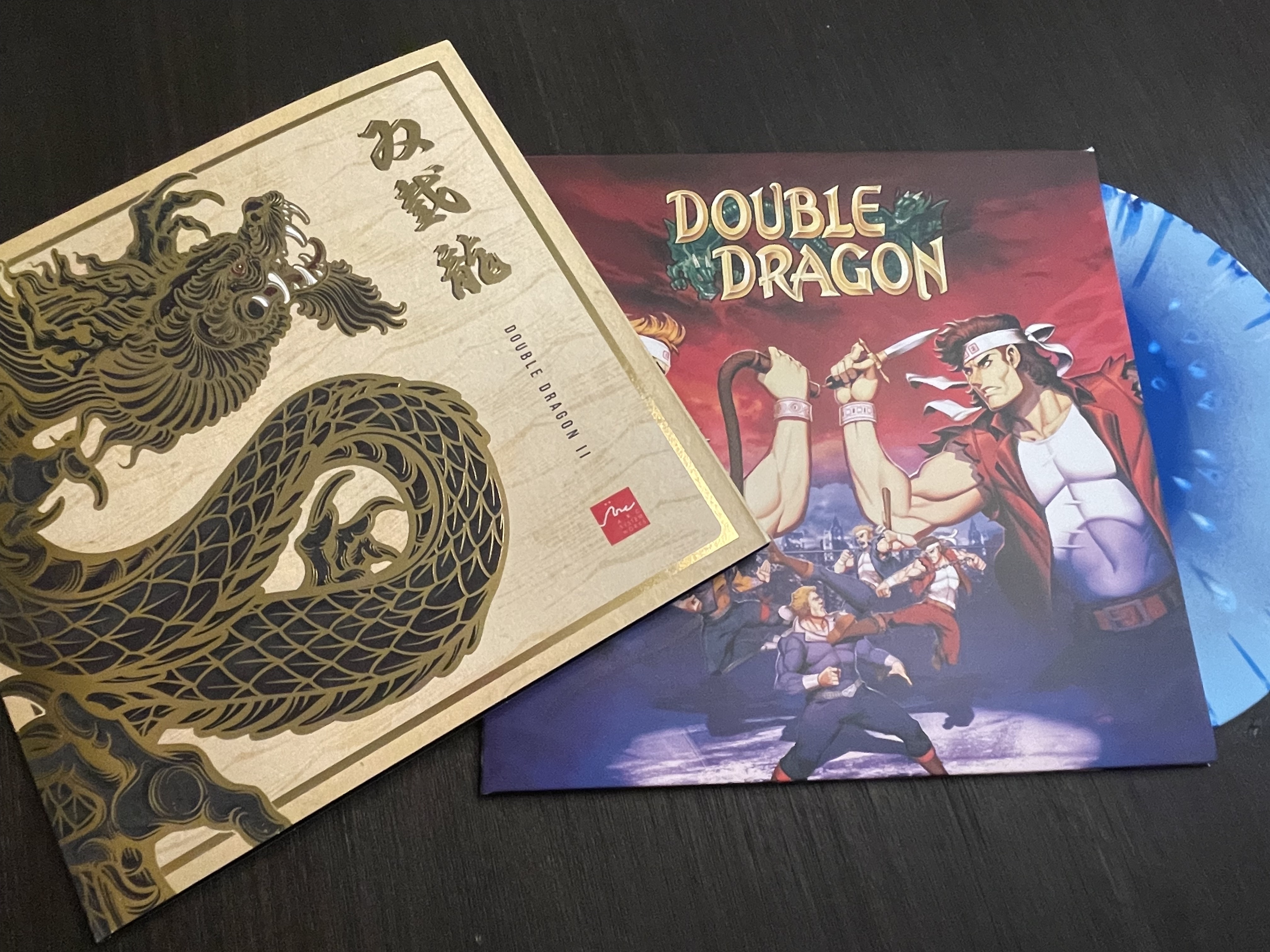 Now this is more like it. Double Dragon games on NES have outstanding music. They each have at least one track that I’m not overly enthused to hear when it comes on, but all in all they’re well worth listening to from top to bottom. The packaging is really nice too. They don’t have official art, but in their place they have these really nice recreations. The slipcover is where it's at though. That thing is double sided, and absolutely gorgeous.

The sound quality isn’t amazing, but it’s never what I’d call a problem. Things get a little crunchy toward the center of the disc like the Mega Man ones, but it’s really faint, so I’m more or less okay with it. They had color options on the discs too with matching headbands, which was a nice touch. I would have loved it if they had found a way to include Double Dragon III, which also has some great tunes, but if I was only going to get 2, it would be these two. Great set. Channel 3 has my trust. 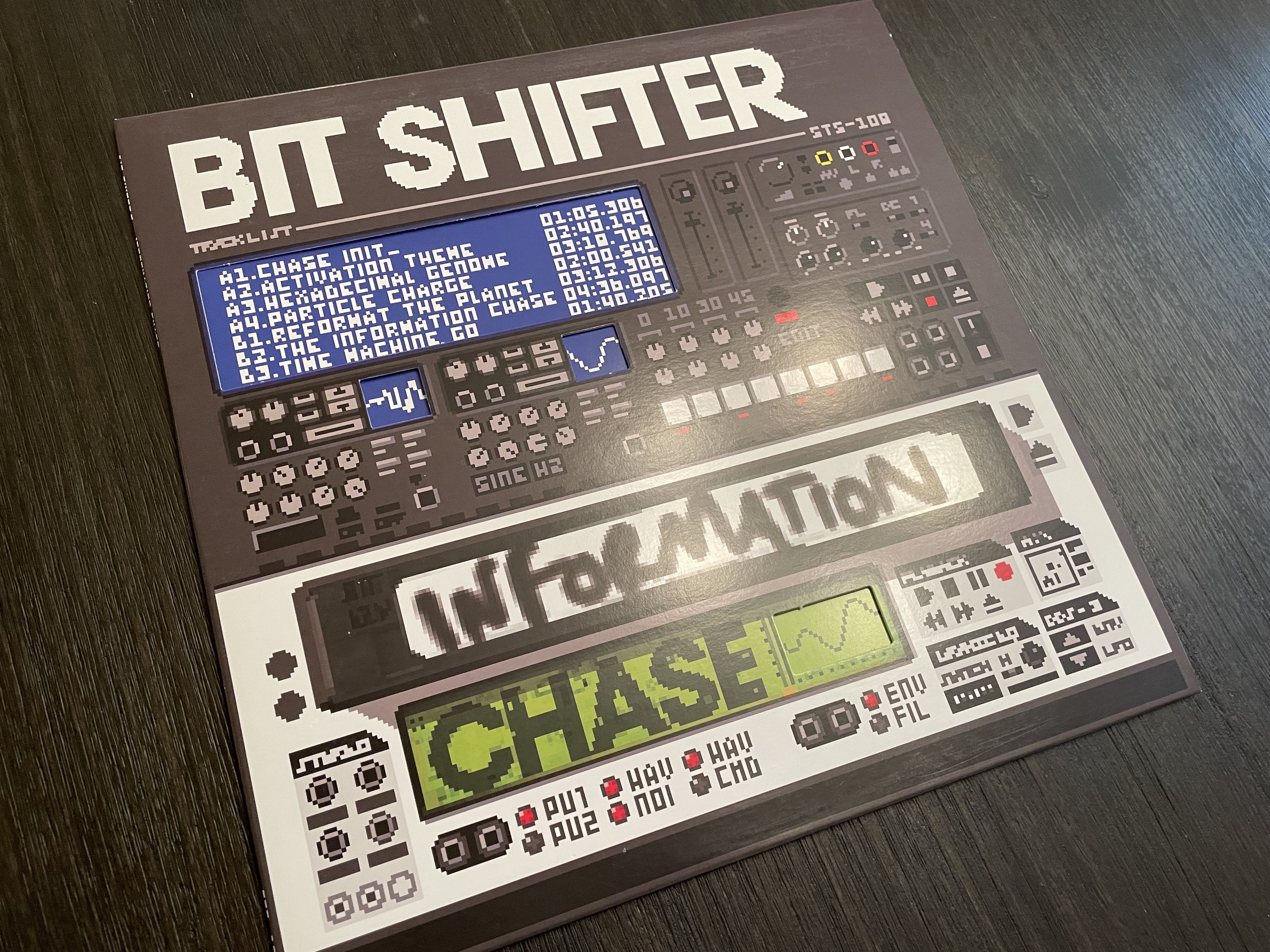 I don't actually own any video game soundtracks from these folks, but I do own this magnificent chiptune album by BitShifter. It’s actually one of my all time favorite albums in any medium, so the fact that it exists at all on vinyl is kind of amazing. And if the treatment of this music is any indication of how they treat their video game music, then I’m sold.

This record looks and sounds amazing. The disc itself is a cool clear blue, and the slipcover “animates” when you pull the record out. It’s such a clever thing. The sound quality is perfect as well. This album was created on a Game Boy, and it sounds incredible here. I had the good fortune to interview this company on the SAG Podcast recently, and they confirmed that they make these records to be listened to first and foremost, and that comes through brilliantly. Ship to Shore will absolutely get my business again in the future. In fact, I already pre-ordered the Gimmick! soundtrack from them. Can’t wait! 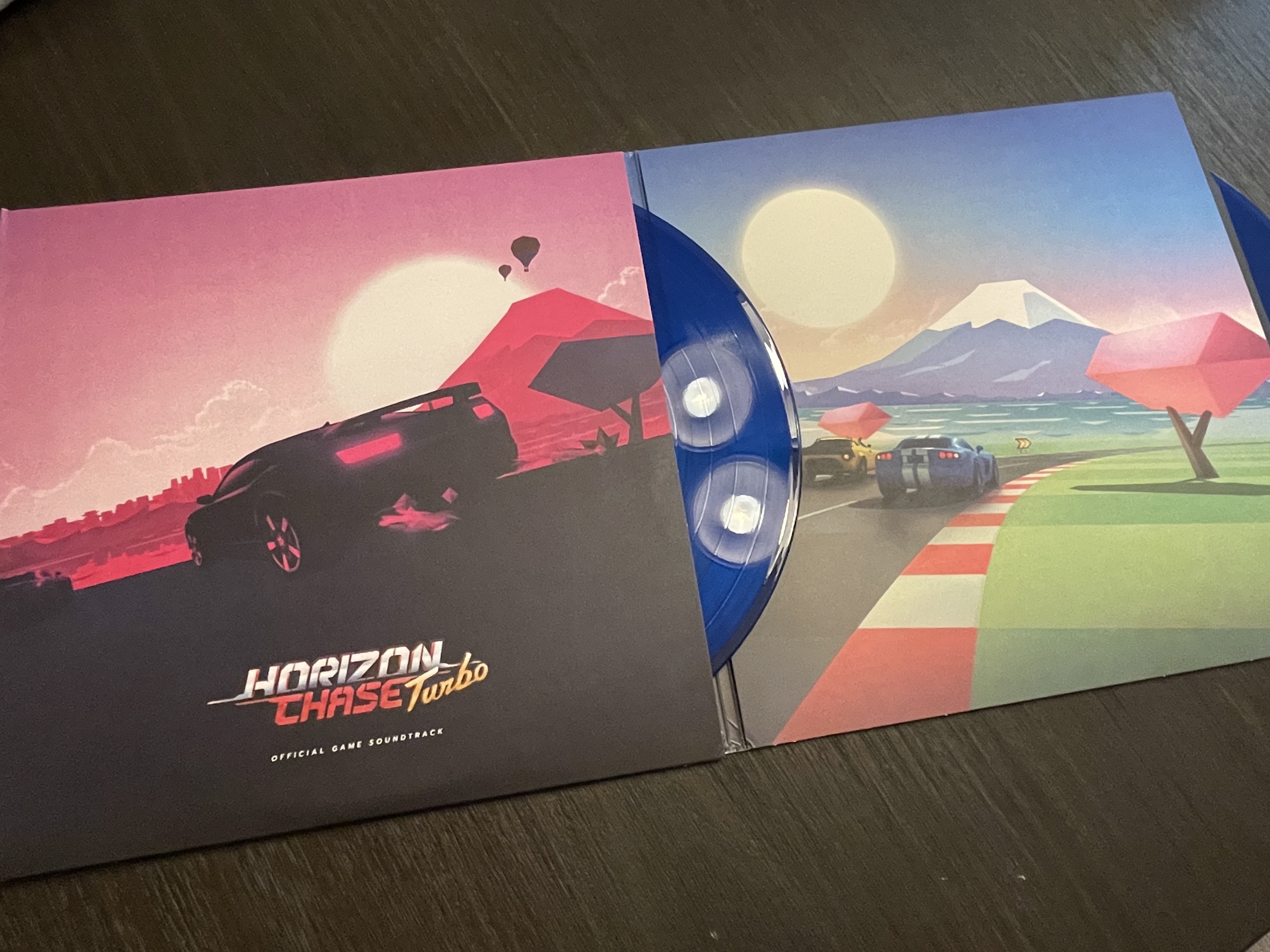 Unlike everything else I’ve gotten, Horizon Chase Turbo’s soundtrack isn’t a retro chiptune kind of thing. This is modern sounding music, and it’s incredible. I love this game to death, and its soundtrack is a big part of that. Thankfully this vinyl does it justice. The sound quality is great. If I had one complaint, it would be that the gatefold sleeve is a little hard to get the discs in and out of. It’s quite pretty though, and really it’s a small complaint. This is a great set, and clearly made with love and respect. Minimum Records has my trust.

That’s all I’ve amassed so far, but there’s a lot more I want to track down. Shame Nintendo doesn’t release any of their stuff on vinyl. That would be amazing. Anyway, as you can see, this stuff is a real mixed bag. Vinyl is a trendy thing to collect right now, and it seems that a few companies out there are more than happy to ride the wave of that collectors niche without much regard to how their records actually sound. Or at least that’s how things sound to me. Maybe it’s all in my head. Maybe my record player is just not all that great. I’m no expert, so take these reviews with a grain of salt. These were my experiences though, and at the end of the day, that’s all I have to go on. I hope this was helpful, and if you have any information that I don’t have, feel free to let me know! Either way, I hope you enjoy some killer video game music today.