We finally got some details on that new Pac-Man collection, Pac-Man Museum+ coming to PlayStation 4, Xbox One, PC, and Nintendo Switch. It’s honestly looking like a pretty great selection, with often overlooked gems like Pac-Man Arrangement, and other stuff like Pac-Man Battle Royale hitting home consoles for the first time.

For as great as the lineup is though, it’s hard to look at it and not notice some pretty big names completely missing. Surely it wouldn’t have been too difficult to get more Pac-Man games included. It’s not like they take up a huge amount of space. Well, for the most part.

But that brings me to my point. What if these big games aren’t included because they’re holding them for a potential volume 2? 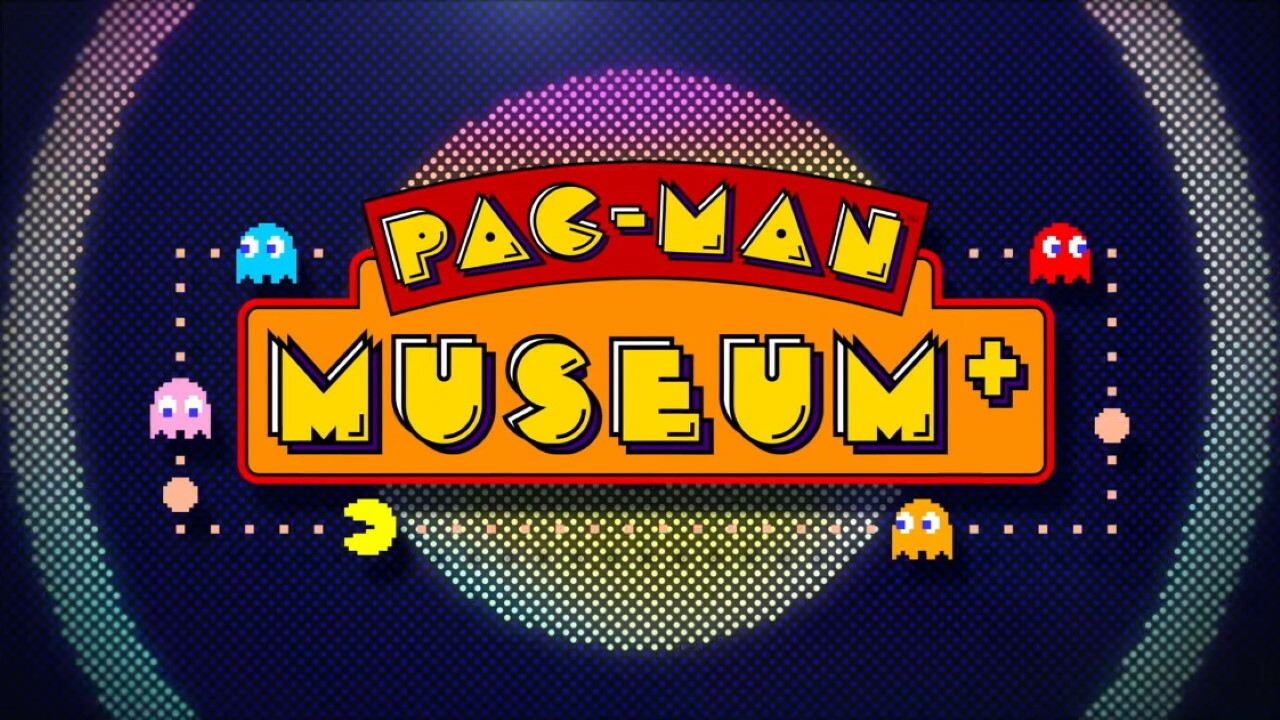 So this is purely going to sit in the speculation department. And even then, I can’t say I’m all that confident something like this would actually happen. But in the name of fun, let’s speculate on what games could potentially appear in Pac-Man Museum+ Volume 2!

The Wife and Kids

Ms. Pac-Man and Jr. Pac-Man. These two games right here are without a doubt the two that stick out the most in terms of stuff that’s missing. Ms. Pac-Man may not have been created internally at Namco, but it’s arguably an even more successful and enduring game than its predecessor, and it’s considered (with good reason) by many to be the superior of the two. Namco used to re-release this game all the time, but lately it seems like Ms. Pac-Man has been experiencing a lack of love from Namco. 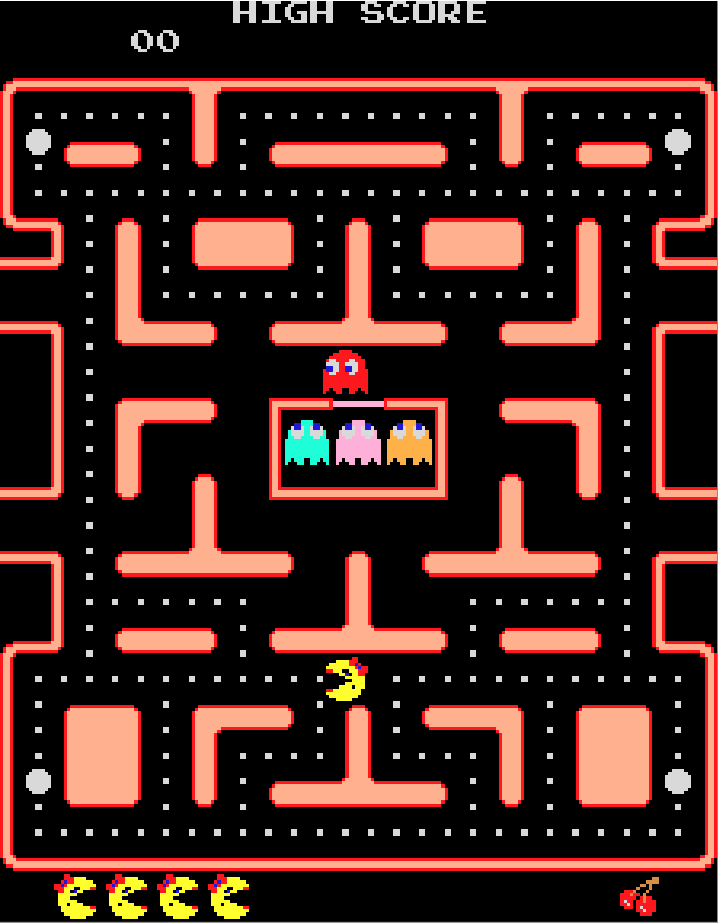 It’s the kind of game that, if it were me, I’d want to put front and center on a collection like this, like they did with Namco Museum Vol. 3 way back on the PlayStation 1 days, so I guess if there was ever any sort of plans on making a followup, this would make the most sense as a title to sell it on. 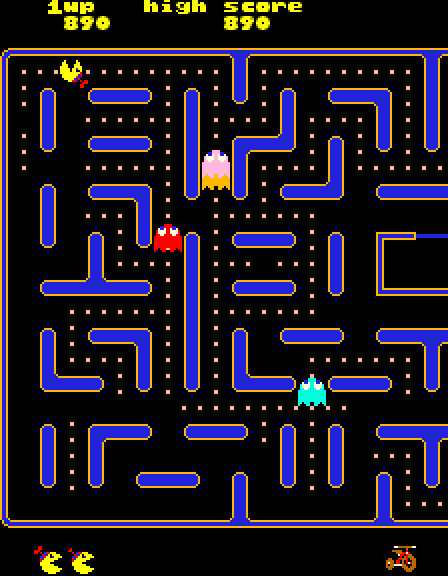 Jr. Pac-Man is a bit of a different animal though because it wasn’t anywhere near as successful as Pac-Man or Ms. Pac-Man, but it’s still a beloved classic by many, and a very interesting take on the Pac-Man formula in its own right. It absolutely deserves a proper home release and would serve as a great bullet point on a Pac-Man collection.

And the Baby Makes Three

On the other end of the spectrum, we have Baby Pac-Man. This one’s a bit of a challenge because of its exact nature. If you’ve never seen this wacky thing in the wild, it’s half Pac-Man game and half pinball table, literally. There’s an arcade screen that plays a Pac-Man style game, and underneath it there is a literal physical pinball table. It’s wild. 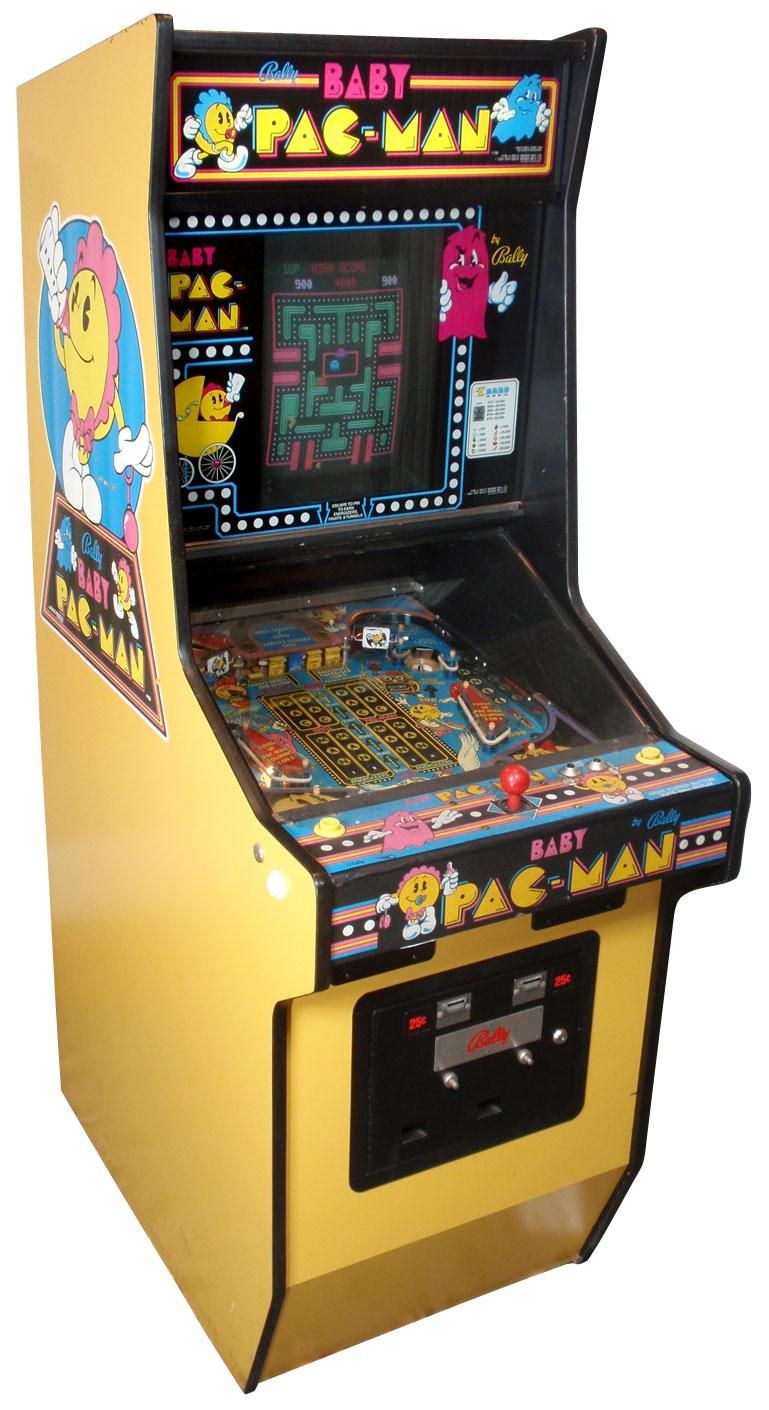 So for obvious reasons, Baby Pac-Man hasn’t been ported to a lot of home consoles. However, video game pinball has come a long way since the 80s, and it’s not hard to imagine someone at Namco working with one of those established companies with super realistic pinball simulations to get Baby Pac-Man up and running on modern consoles in a believable manner. Would make for a heck of a cool addition to a Pac-Man Collection, right?

Most home console ports of various Pac-Man games over the decades have aimed for a degree of arcade perfection. The Atari 2600 struggled in that area thanks to it being considerably less powerful than most contemporary arcade hardware. As a result, the 2600 ports of Pac-Man, Ms. Pac-Man, and Jr. Pac-Man are absolutely fascinating, and different enough from their arcade counterparts to warrant further study. 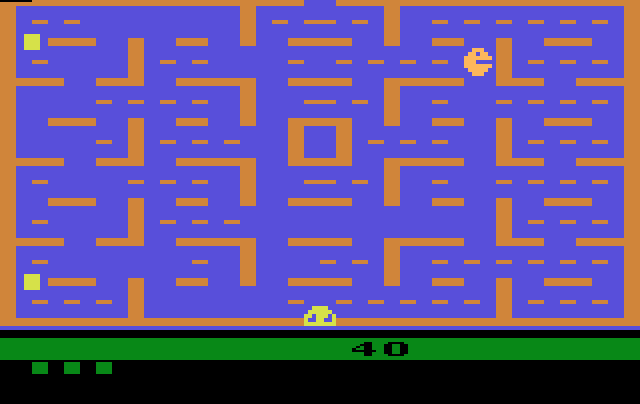 The original Pac-Man is often credited with kicking off the downfall of the US video game market, coupled with ET. And while it’s not exactly a great port of Pac-Man, it’s kind of... fun? It’s also an incredibly important piece of game history that’s never been ported to a modern console of any kind.

The 2600 version of Ms. Pac-Man is pretty neat too, especially compared directly against the first game. Strangely enough, it’s the opposite of its arcade counterpart in that it’s probably the least interesting of the three on 2600 but it’s still interesting enough to warrant inclusion. 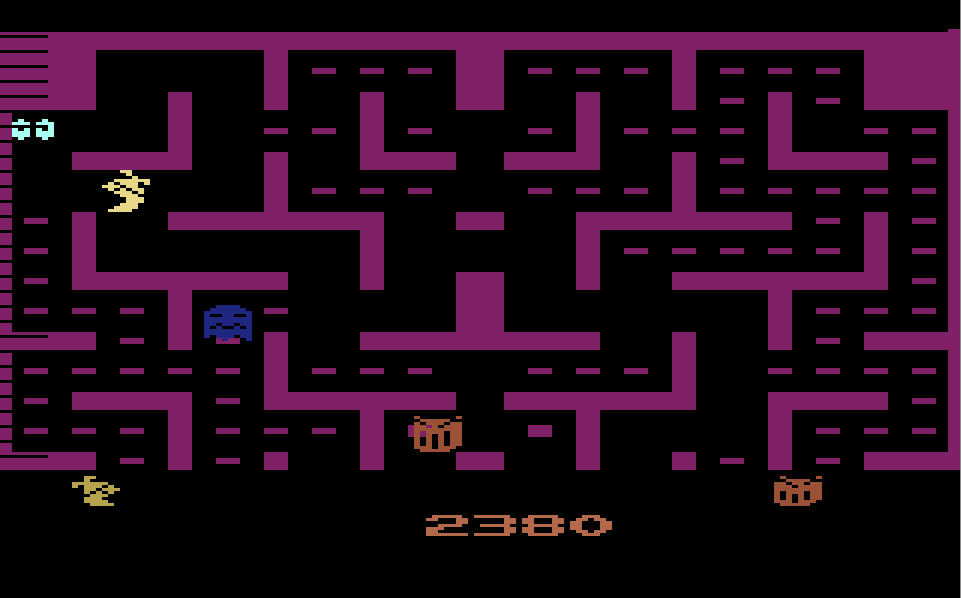 Jr. Pac-Man on 2600 is fantastic. It’s a master class in Atari 2600 game programming and a super fun game to play, even today. It’s also pretty different from the arcade version, and like the other two it’s never been re-released in any form since its 2600 debut.

Pac-Pix and Pac-Man Pinball Advance have been trapped on their respective consoles since they released, and in a lot of ways that makes sense. Pac-Pix was inextricably linked to the DS’s design. So while it’s completely understandable why this one hasn’t been ported anywhere yet (especially considering I don’t think it sold very well) Pac-Pix is a really fun game that’s worthy of being revisited! 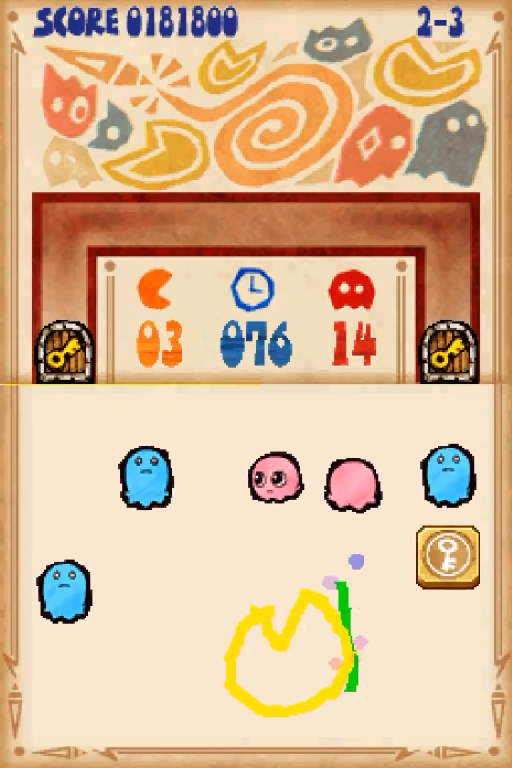 Basically you have to draw a pac man on the screen, and depending on how big said Pac-Man is, he will be able to eat different sized ghosts. You draw lines to direct him around, and no matter how ugly he is, as long as it’s even vaguely recognizable as Pac-Man, the game will animate it to life and it will start moving around the screen. The soundtrack is also quite good.

Pac-Man Pinball really isn’t all that special, but it’s still a fun little Pac-Man themed pinball game, so why not include it?

Pac-Man 2: The New Adventures is an awful, awful game. But it’s the official numbered sequel to Pac-Man so I GUESS it should be included. It’s just… so very bad. But for as much as it pains me to say, a comprehensive Pac-Man collection just doesn’t feel complete without it. 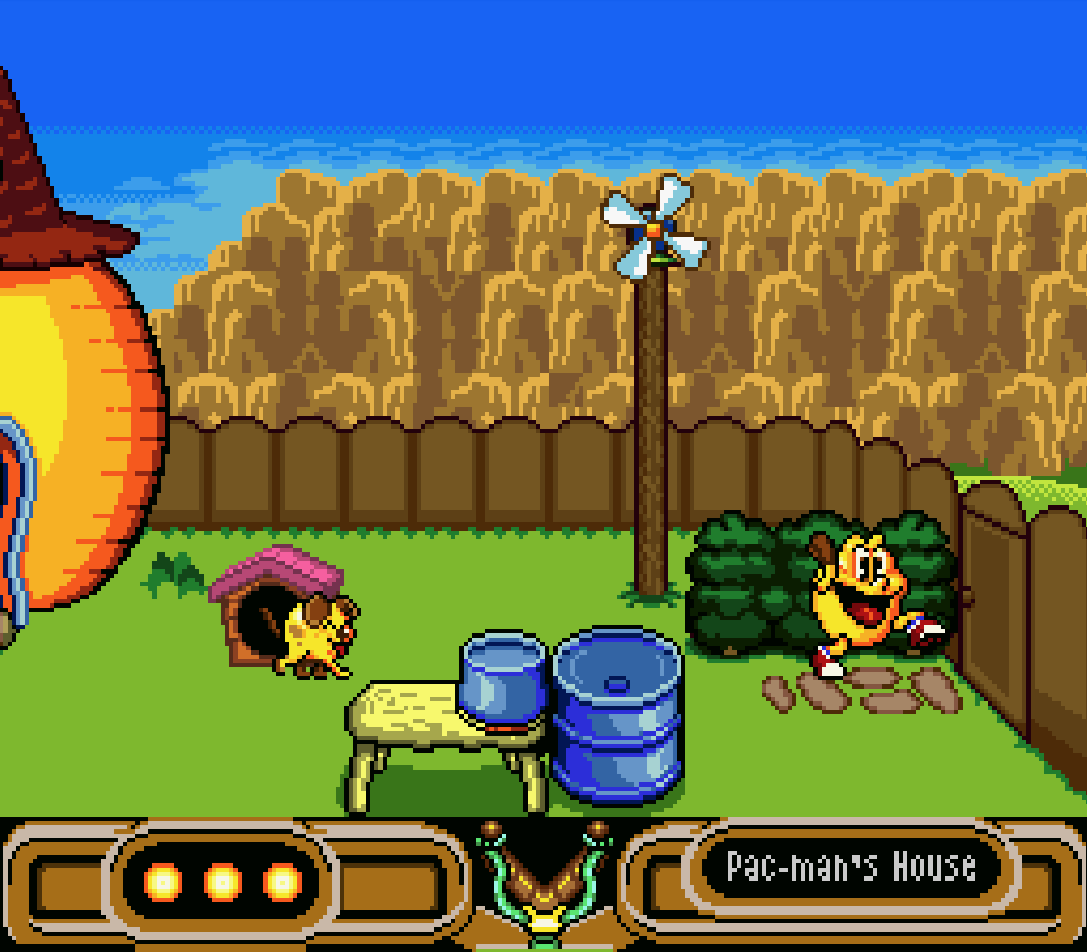 In order to balance that particular mess out, Ms. Pac-Man’s Maze Madness would have to be included. That game is a delight, and while it was on PSX, N64, Dreamcast, and GBA, it hasn’t been ported to anything modern since. It’s an incredibly fun game that would round out this collection beautifully. It would also help wash the putrid taste of Pac-Man 2 out of your eyeballs. 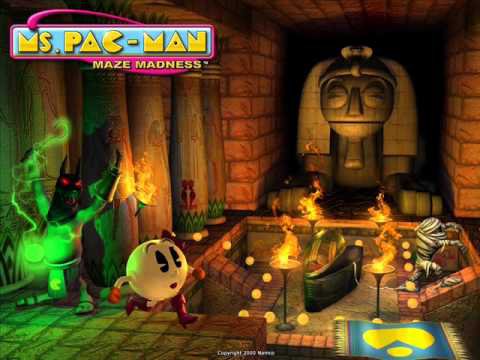 A World of Difference

That leaves the Pac-Man World games, which if I’m being honest would likely warrant their own collection. People love these games, and they’re pretty neat looking. Do they have the cache to stand on their own in a unique trilogy remastered collection? Probably. Would it be nicer if they were just included in this theoretical collection? Absolutely!

Pac-Man as a 3D mascot platforming hero is kind of a strange thing, but it did seem like a natural way to evolve the character past his abstract pizza shaped design. Heck, if Namco can put the effort into a second round of Klonoa remasters, why not do the Pac-Man World games too? They certainly would make for a heck of a selling point for a collection like this. 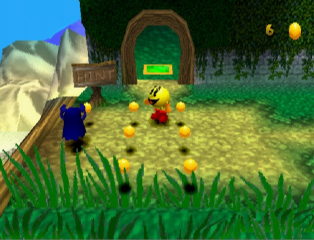 That leaves a decent number of other Pac-Man games left in the lurch, but if we’re talking about quality, this is how I’d parcel together a new Pac-Man collection. Well, Pac-Man 2 isn’t exactly what I’d call “quality” but you know what I mean. But what would you do? Would you buy this collection? Are you going to buy Pac-Man Museum+ when it comes out? What games would you include in a Pac-Man collection? Let us know!