The True King of Kong

This “Game Boy Sequels” series has been about how often-overlooked Game Boy sequels have influenced franchises going forward, and nowhere is this theory more obvious than in the form of Donkey Kong ‘94. Launching mere months before the earth-shattering success that was Donkey Kong Country for Super NES, Donkey Kong ‘94 tends to get overshadowed a lot, even though it resurrected the character several months before Country got the chance, and it did so by evolving the existing DK gameplay instead of reinventing the property from scratch. As the first new Donkey Kong game since 1983’s Donkey Kong 3, Donkey Kong took what made the first two arcade games tick and expanded on it to an utterly genius degree. 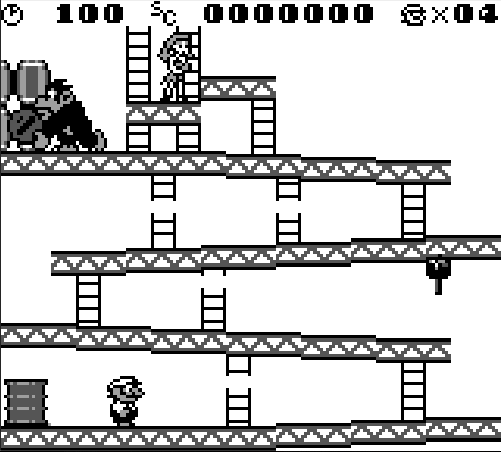 The game starts out just like the original arcade Donkey Kong, albeit considerably shorter. And I don’t mean shorter as in the game has fewer levels, I mean shorter as in the stage itself had to be shrunk down a bit to make it fit within the confines of the Game Boy’s meager screen real estate. Still, the action was undeniably Donkey Kong. Mario had a little bit more aerial control, but the basic premise of Donkey Kong standing at the top of the screen tossing barrels down for Mario to jump over was intact. Sure, it was easier than its arcade counterpart, but a solid conversion nonetheless.

The second screen brings you to the infamous “jacks” stage, and this time you actually get to see Donkey Kong himself throw the jacks down at Mario, which was pretty neat. Then there’s the lost Cement Factory stage, presented here in all its glory, and finally the last stage where you unlock the girders (or whatever they’re supposed to be) and make Donkey Kong fall on his head. But this time as Mario walks toward Pauline, the music cuts out as Donkey Kong stands back up, pounds the ground and to break the platform Mario is standing on, snatches Pauline, and goes on the run. 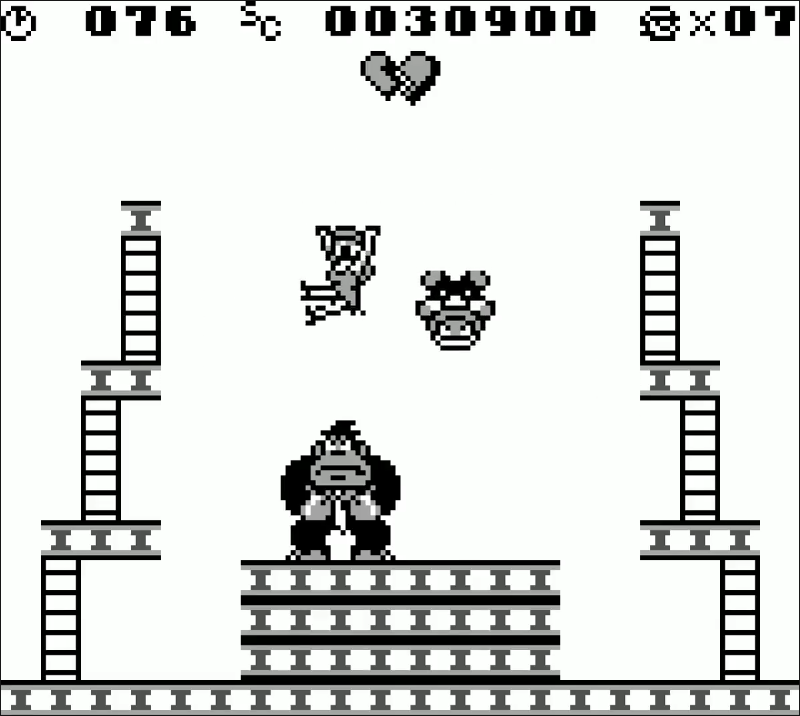 This is where things get interesting. What happens next is a quick cinematic of Donkey Kong running through a door and locking it behind him. Mario crashes into the door, but then he spots a key which he carries over his head Super Mario Bros. 2-style and unlocks the door. This is the first of many cutscenes that teach you about all the new mechanics that have been introduced to the game. And what’s extra cool about them is that they’re all actually available right from the start, you just don’t know they exist until you’re taught how to do them later in the game, or if you pull them off by accident. And boy does Mario have some crazy cool new moves in this game.

Mario’s basic acrobatic skills may be well established today, but things like the triple jump, handstand, and back flip that were popularized in games like New Super Mario Bros. and Super Mario 64 actually started here. See, if you aren’t familiar with the original Donkey Kong game, Mario used to be a pretty stationary guy. Jumping over a barrel was about the extent of his physical prowess. They expanded his repertoire greatly for this sequel, but they did so without making him work like he does in the Super Mario games. He still dies if he falls too far, though there’s considerable more leeway in that department, and his offensive capabilities are more in line with Super Mario Bros. 2 where he can pick up things and toss them instead of the act of landing on top of them doing the damage.

And then there’s the game’s length. There are so many levels. This game is absolutely HUGE, and each stage presents itself as a new puzzle challenge. In the main stages, it’s all about finding a key and getting it safely to a door without dropping it. Every fourth stage though is a Kong encounter where you either have to make it to the top like in the old arcade classic, or find ways to throw barrels back at DK. It all feels like a brilliant evolution of the gameplay introduced in that seminal classic, but they didn't stop there. They also incorporated elements from Donkey Kong Jr.

In several stages later in the game, Mario has to actually climb vines just like Jr. did in his arcade outing. Jr. himself even makes several appearances helping his dad thwart Mario’s ascent by flipping switches and generally being a nuisance. Sadly, there aren’t any stages where Mario grabs a can of bug spray and shoots DK in the crotch. Sorry Donkey Kong 3 fans.

Besides all of that wonderfulness, this was also the first game to give DK his iconic necktie, features a truly unforgettable final showdown, and it was the game that launched the Super Game Boy accessory. Most of the time when a game said it was Super Game Boy enhanced on the box, that meant a couple of pre-programmed color palettes and a fancy exclusive border. But in the case of Donkey Kong, it meant full color scenes, SNES quality music in the ending, and an actual voice clip of Pauline yelling “Help” at the beginning of each stage. Next to Space Invaders which actually had a full SNES rendition of the game stuffed in the Game Boy cart, Donkey Kong stands as the most impressive use of the Super Game Boy accessory ever put together. 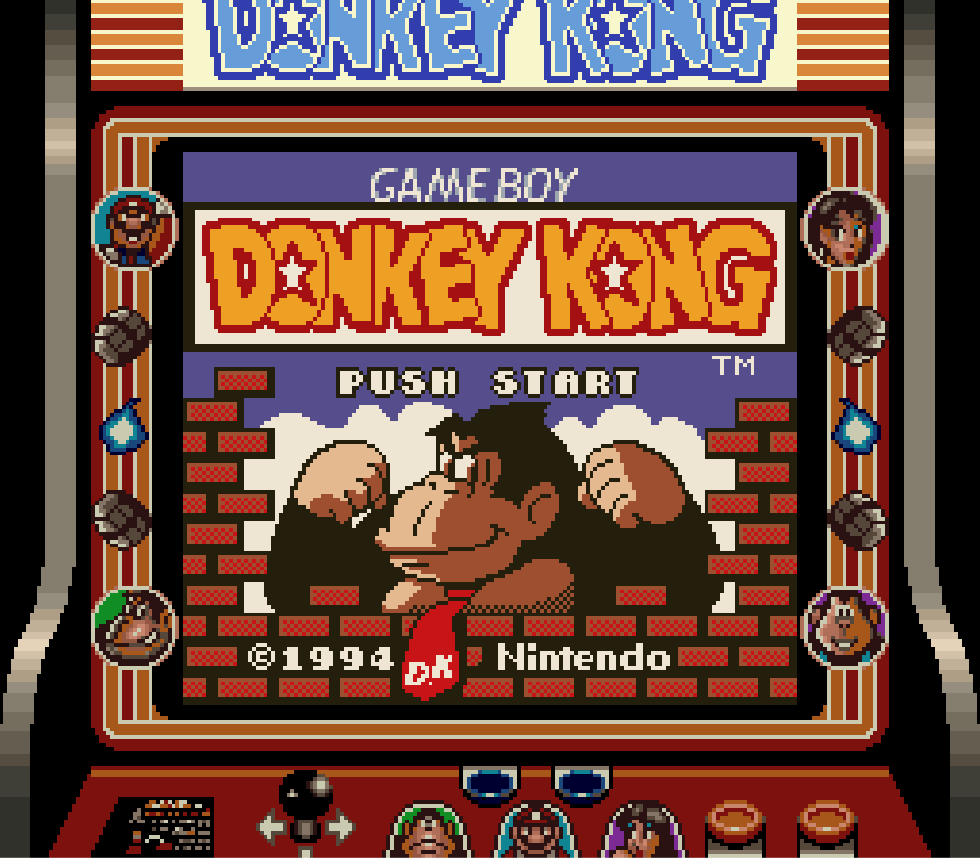 Donkey Kong ‘94 is a masterpiece, and one of the best games anyone has ever made for the original Game boy, or any system for that matter. The game did fairly well for itself, so much so that Nintendo kept the series alive for many years afterwards, though they did so in a pretty weird way.

There was a direct sequel for Game Boy Advance called Mario vs. Donkey Kong. It was good, but it didn’t quite have the same spark as the Game Boy original. However, that game introduced the concept of the Minis, little roy versions of Mario that Donkey Kong liked to steal. This led to further sequels being way more focused on the Minis, and the game transformed into something a little more akin to Lemmings than the original lDonkey Kong. They’re good, but they weren’t quite what fans like myself were looking for. 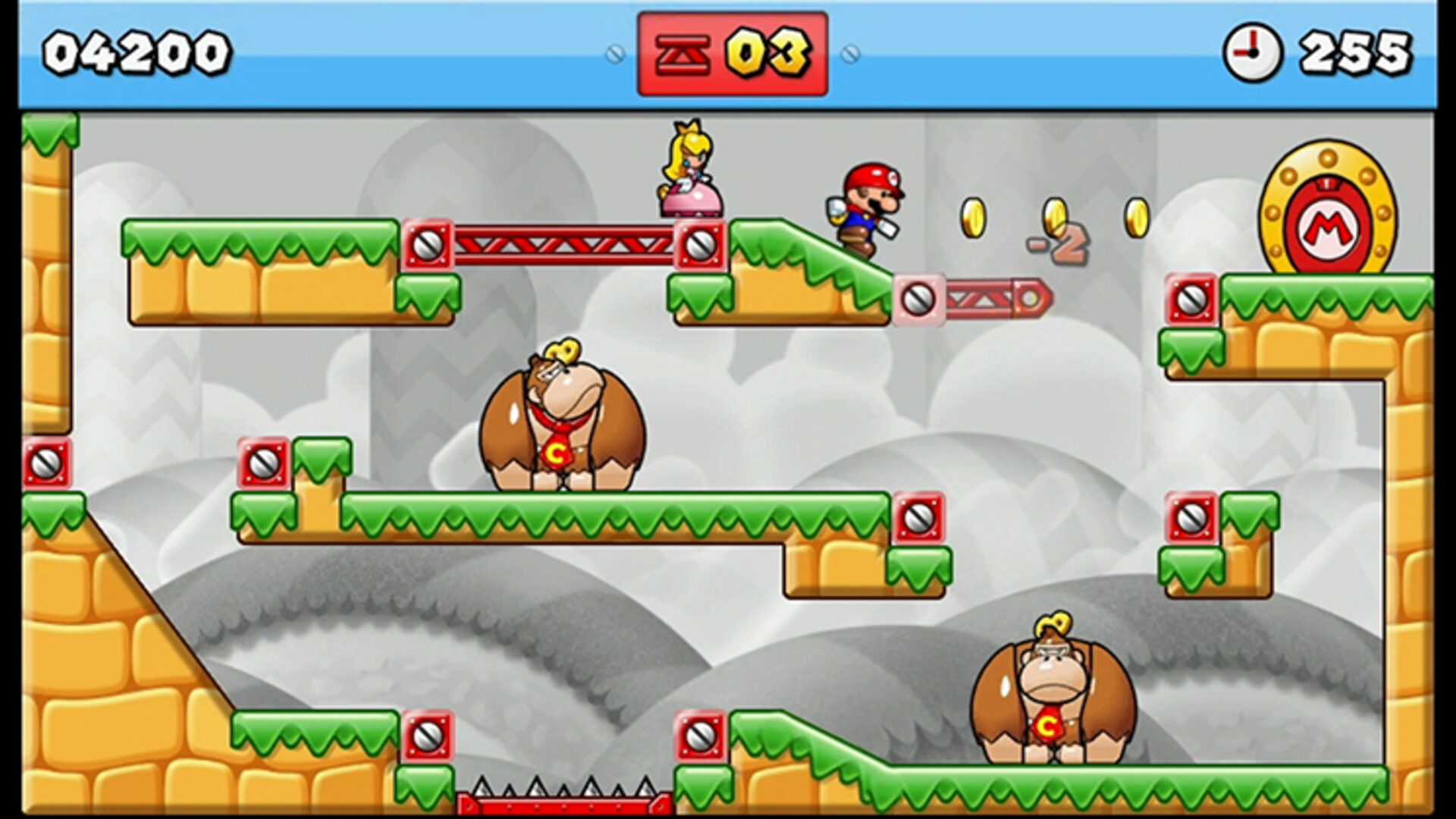 The good news is, this game is still available on the 3DS Virtual Console for a paltry couple of dollars. It isn’t even the most expensive Game Boy cart in the world if you want to go that route, and of course there’s always the EverDrive solution. But no matter how you do it, play this game.

Join us next time when we look at a somewhat less successful transition to the Game Boy’s small screen, but one that changed the course of a beloved franchise forever.