Remakes that are more than just remakes

When discussing the endless awesomeness that was the Game Boy Advance, the platform’s diverse library is undoubtedly one of the highest of high points. The genius design of the Game Boy Advance SP, the backward compatibility, these things are also wonderful, but like most systems, it’s the games that made the platform, and the GBA was home to so many great ones.

Original games are always a system’s bread and butter, but it’s arguable that the Game Boy Advance was equally defined by its remakes. Its primary launch title was Super Mario Advance, which was a remake of the Super NES remake of Super Mario Bros. 2, which spawned an absurdly numbered series of sequels which were also all remakes of SNES Mario games.

Tons of 16-bit classics of all sorts found themselves being remade and placed on the platform. Most of the time, these wound up being pretty basic, like Earthworm Jim or Pitfall: The Mayan Adventure. Simple straight ports designed to make a quick low-effort buck. Other times though, companies went the extra mile to create something special.

A War to End All Alien Wars

Let’s start with Konami and their venerable Contra franchise. Contra III: The Alien Wars for Super NES is considered by many to be the pinnacle of the series. It’s an outstandingly put-together game that showcased the power of the Super NES while maintaining the magic that made the first two entries the all-time classics that they are. Konami had tried once before to make The Alien Wars portable back on the original Game Boy with surprisingly good results given the technology, but with the GBA on their side, this game would finally be the perfect Contra on the go.

At some point in its development though, it was (arguably wisely) decided that the original game’s bizarre Mode 7 top down stages be removed for the GBA port. Maybe it was some sort of technical limitation, maybe it was the GBA’s lack of 4 face buttons, or maybe it was that most people considered those segments to be the weakest parts of the original, but for whatever reason they were taken out of the game. Left alone, this would have left Contra III feeling rather short.

For as loved as Contra III is, there’s another 16-bit Contra game that fans adore, and that’s Contra: Hard Corps for Sega Genesis. So, rather than try to create actual new content to replace those Mode 7 stages, Konami brilliantly decided to take levels from Hard Corps and use them in place of the overhead levels.

This made Alien Wars EX more than just a port, it was now a mashup of two of the most respected games in the franchise, and something enticing for long time fans other than just playing Alien Wars on the go.

This was made especially cool because the game mechanics in Alien Wars and Hard Corps are kind of different, so those Hard Corps levels felt like they were given a fresh coat of paint.

Unfortunately, the final result wasn’t the ultimate portable Contra experience that they were going for. It’s still a perfectly playable game and it’s incredibly interesting, especially for long time Contra fans, but the game’s speed feels off, secondary weapons are gone, and the adjusted aspect ratio makes stuff feel a bit cramped. Still, Contra Advance: The Alien Wars EX is a fascinating experiment.

Meanwhile, Capcom was taking a similar approach to one of their classic franchises in Super Ghouls n Ghosts.

The Ghosts n Goblins series is known for being incredibly hard, but it’s also well respected because most of the entries in the series are undeniably well made.

Again, with the Game Boy Advance being a great place to port Super NES games, Capcom decided to port their classic Super Ghouls n Ghosts to the platform, but much like Konami and Contra, Capcom went the extra mile here with some new old content.

You can play the game in its original form if you want, but also included in the game is an “Arrange Mode.” Here, the game plays out with different stages depending on how well you’re doing. These “new” stages are actually repurposed stages from the original Ghosts n Goblins and Ghouls n Ghosts!

This would be pretty cool on its own, but they updated the visuals in these stages to match the style created in Super Ghouls n Ghosts, so they look and sound better than ever before. Also, Super Ghouls n Ghosts introduced the double jump, which means you can now play these classic stages with all the powers Arthur was able to obtain in his SNES outing. 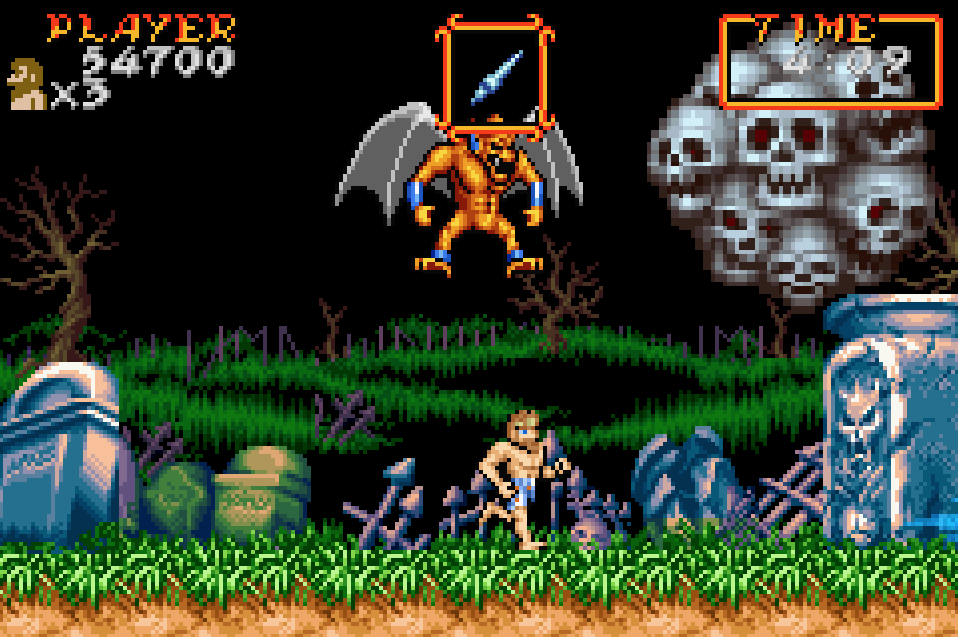 However, much like Contra Advance, this port isn’t without its compromises. The music, for example, took quite a hit. It doesn’t sound bad by any stretch, but when you compare it to the impossibly good sounding SNES original, there’s definitely a drop in quality. The new versions of the “new” stages sound pretty solid though!

Also, just like in Contra, the screen size becomes an issue. For this one, the screen does some weird panning to try and keep the action properly framed, but it reminds me a lot of the old pan and scan stuff they used to pull when they released movies on home video for full screen televisions. The new pans aren’t quite as jarring as all that, but they're very noticeable.

There have to be more examples of this kind of thing out there, but I’d love to see even more of it. The business of remaking old games isn’t going anywhere, and tossing content from other games in and applying the other games’ mechanics to them is such a cool treat when it happens.

Even when it’s flawed like these two games, I’ll take this kind of effort any day.