Mario Kart 8 is truly the game that will never die. Honestly though, I’m having a hard time seeing that as a bad thing. I still get plenty of regular play out of the game with my wife and kids. The only thing that’s really missing is new courses, and Nintendo has just solved that problem in a pretty creative way.

The Mario Kart 8 Deluxe Booster Course Pass will bring 48 previous Mario Kart tracks to Mario Kart Deluxe over the course of the next 2 years. Let’s get the bad stuff out of the way first.

As stated, the new courses aren’t actually new courses. They’re new versions of old courses from throughout Mario Kart’s history. They also seem to be pulled from the mobile game Mario Kart Tour, which has resulted in a somewhat jarring graphical appearance when compared to the existing tracks in Mario Kart 8 Deluxe.

I’ve seen this being called “lazy” and while it’s not quite as high-effort as I would like to see, it’s certainly not as bad as it's being made out to be. For me, it’s just nice to have this new stuff available to play on my TV instead of on my tiny phone screen with touch controls and an onslaught of predatory microtransactions. 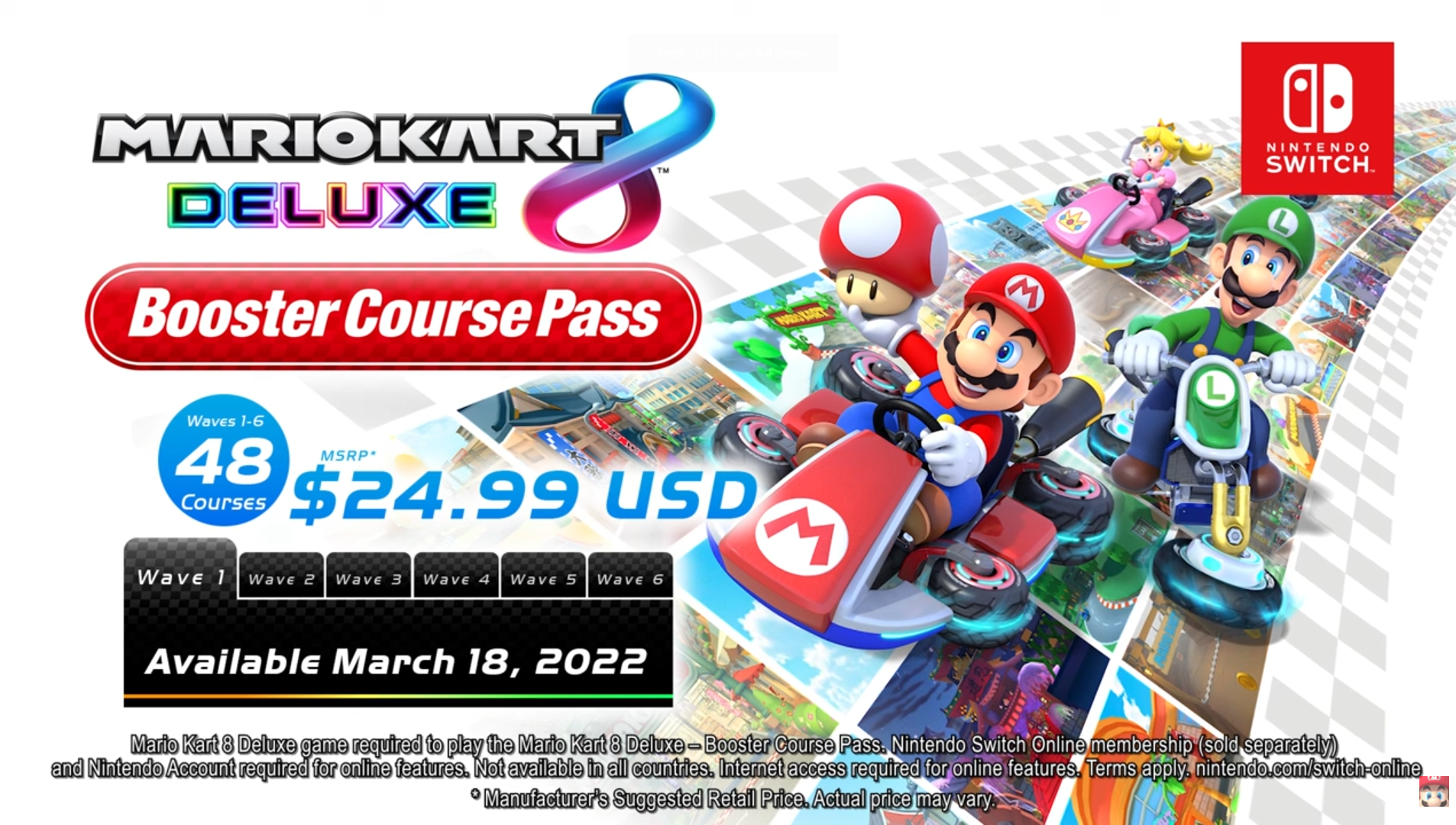 Then there’s the price. The pass is $25, which considering how many courses that adds, comes out to about 50 cents per track. Or, if you happen to have the Nintendo Switch Online Expansion Pack, it’s free with your subscription. This makes the NSO Expansion a little more enticing that it used to be, which is something it desperately needed.

Still, it’s been hard to ignore the swath of people who couldn’t possibly care less if game content is actually good, only how much “effort” needed to be put into it. Is it a quality product? Doesn’t matter. Aloy reused a jump animation in the new Horizon game? Lazy developers. Absolutely inexcusable filth. These courses were already created for another Mario Kart game you’ve probably never played? What a bunch of money-grubbing lazy slobs. They should have made them all from scratch, and they should have been given to us for free. This obsession with how hard it is to make something being the sole factor in whether or not it’s a viable product is absurd, and that’s putting it as politely as I can.

Imagine you’re the president of Nintendo. You currently produce a massively successful console with sales that just aren’t slowing down. It’s been out for a while and some people are likely expecting a new, more powerful console soon, but there’s also a worldwide parts shortage going on. You could certainly go ahead and move forward with launching a new console to make the tech enthusiasts happy, but that would cost a lot of money, and keeping the product in stock would be a considerable issue. (See PS5 and Xbox Series). It would also cannibalize sales of your already massively successful (and considerably easier to produce) console. There just isn’t a convincing motivation to release a new console right now.

New hardware is absolutely in your future though, and nothing sells new hardware like new software. And what’s the most successful software on your current platform? Mario Kart 8. This is a port of a game from the previous generation, but people keep buying it. And they keep playing it too. Demand for a proper sequel certainly exists, but as the game itself is still selling so well, what incentive is there to sacrifice further sales of the current SKU in favor of a new one? If anything, creating a sequel for your eventual next platform makes the most sense.

However, there is a spin-off mobile version of Mario Kart that you have put some money into developing. The mobile game is pretty successful, but its audience seems to be largely made up of people who aren’t also playing your console game. In an effort to please everyone, why not take content from that game that the majority of your console players have never played before, nor are likely to play in the future, and add it to your existing massively successful game? Do some minor cleanup work to make it function, charge a reasonable price for it, and even include it as a bonus for people who signed up for your premium subscription. It leaves Mario Kart 9 available to drive hardware sales for your next console, it adds value to your current online service, it adds a ton of content to one of your most successful games that the majority of players have never used before, and it doesn’t cost a ton of development time that could be used elsewhere.

There’s a difference between lazy and smart. This isn’t lazy, it’s practical. Would fully redeveloped tracks that match the level of detail in Mario kart 8 be better? Absolutely. But that doesn’t mean that the notion of something better existing makes what does exist bad. 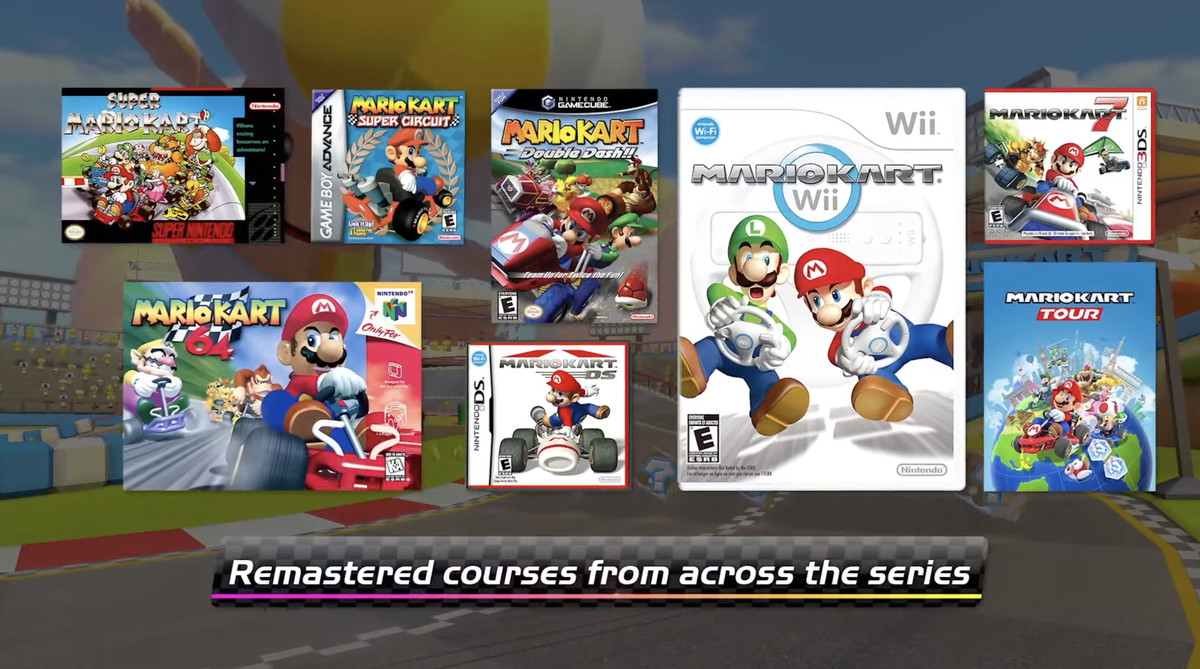 Anyway, let’s get to the fun part, which is trying to figure out what exactly this all means. Mario Kart 8 Deluxe currently features a total of 23 retro courses hailing from Super Mario Kart for Super NES, Mario Kart 64 for Nintendo 64, Mario Kart: Super Circuit for Game Boy Advance, Mario Kart: Double Dash for GameCube, Mario Kart DS, Mario Kart Wii, and Mario Kart 7 for 3DS. Of the remaining 58 courses from those games that have yet to find their way to Mario Kart 8, 37 currently have iterations in Mario Kart Tour. It’s also worth noting that the new courses included the expansion pass also include new courses that were originally made for Tour.

Now, we already know the first 8 courses coming to the expansion pass, so that leaves 40 unaccounted for. Of the courses announced, 3 are classic courses remade for Tour, 3 are original courses made for Tour, and 2 are entirely new for this expansion, sort of. There’s a supposed leak out there claiming that Tour has been datamined and those two courses will be coming to Tour in a future update, but while that’s an extremely likely scenario, it hasn’t been officially confirmed by Nintendo, and as we all know, Nintendo can be quite unpredictable sometimes.

Now, let’s look a little closer at some of those numbers. In particular, Super Mario Kart. That game technically has 20 tracks, but most of those are repeated areas with just different actual track designs. It stands to reason that this expansion probably won’t include repeat assets like that, or at least I hope it won’t, which means that Super Mario Kart only actually has 8 different kinds of courses in total, Mario Circuit, Donut Plains, Ghost Valley, Bowser Castle, Choco Island, Koopa Beach, Vanilla Lake, and Rainbow Road. Of those, only Bowser Castle hasn't been remade in Tour or 8. 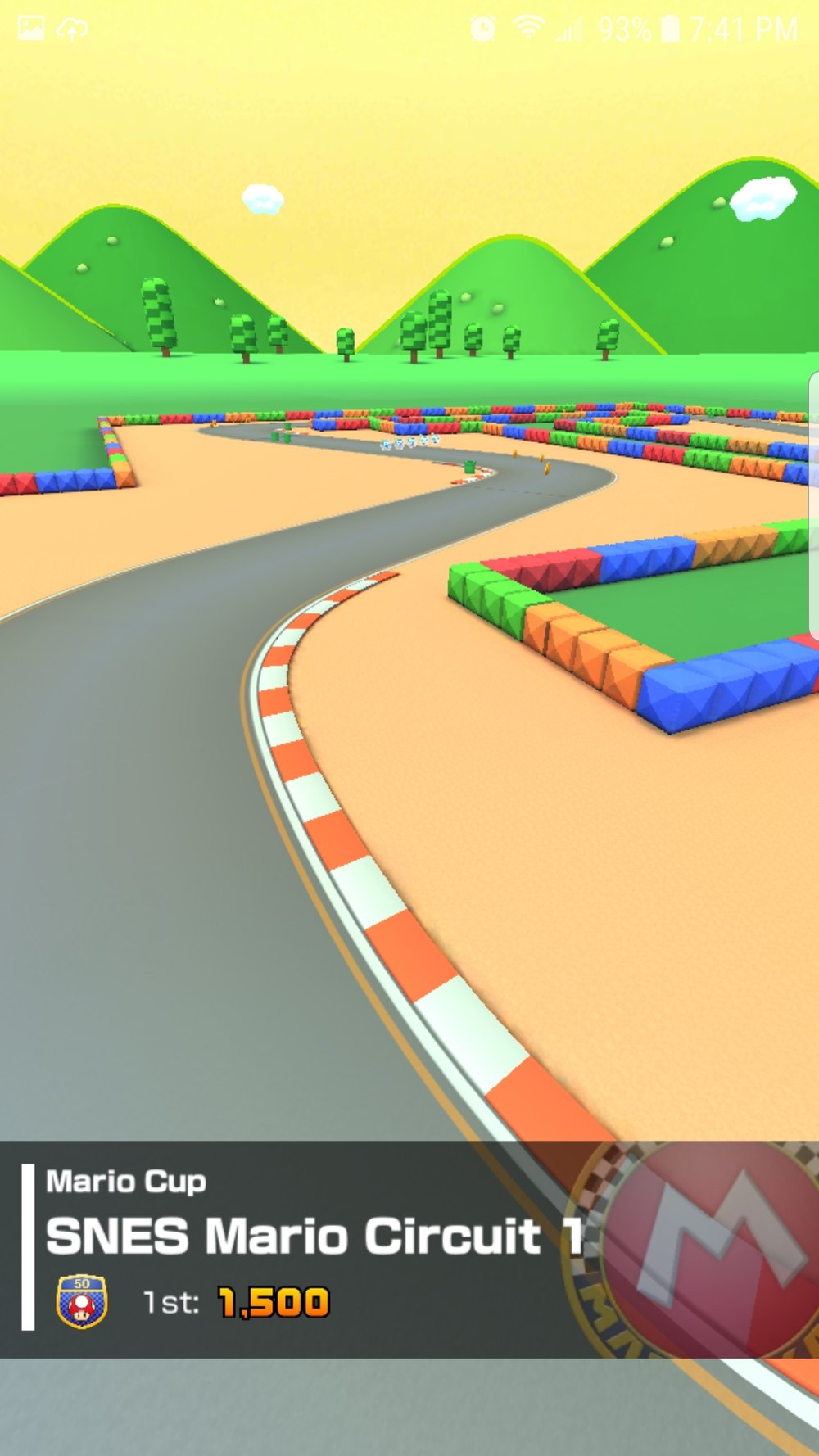 However, Tour has remade a lot of those duplicate courses, as well as the duplicate courses in Mario Kart: Super Circuit, which just so happen to be the Bowser’s Castle courses. Similarly, many of the original courses created for Mario Kart Tour work the same way, so while there are technically 22 tracks from Tour still available to come to the Expansion Pass, there are only a total of 12 course types to pull from, New York Minute, Tokyo Blur, Paris Promenade, London Loop, Vancouver Velocity, Los Angeles Laps, Merry Mountain, Berlin Byways, Ninja Hideaway, Sydney Sprint, and Singapore Speedway.

So while it’s technically possible that we’ll see multiple courses done in the same style in this new expansion, there’s more than enough unique stuff out there to still fill those 48 slots without duplicating any specific course style.

Of course, that’s not the whole story. This is a pretty unlikely scenario, but there’s an entire other pool of Mario Kart tracks to pull from in the world, and those are the unique tracks found in the Mario Kart Arcade GP series. There have been 3 arcade releases (plus 1 VR thing, but that didn’t have any new courses), and if my math is right, those games include a total of 30 mostly unique tracks. Mario Kart: Arcade GP DX features several previous course designs with enhanced features and completely different background themes and elements, so while they aren’t technically 100% new course layouts, I’m still counting them here because I can't imagine I'd really be able to tell the difference. The Namco-specific courses would be especially cool to see, like Pac Labyrinth or Namco Circuit, but I’m not holding my breath for that stuff.

So if we're including all the retro courses available to us from the previous Mario Kart games, the new ones in Tour, and the Arcade GP courses, that’s a total of 80 that Nintendo could pull from, which is just an insane number of tracks.

Personally, I’m all for this. I played Tour for about a week and decided it wasn’t for me, and Arcade GP content has never been ported to a home console for whatever reason. So getting this many courses playable in Mario Kart 8, which is arguably the best playing Mario Kart game ever made, is nothing but good news as far as I’m concerned. As long as Delfino Square makes the cut. I miss that course. 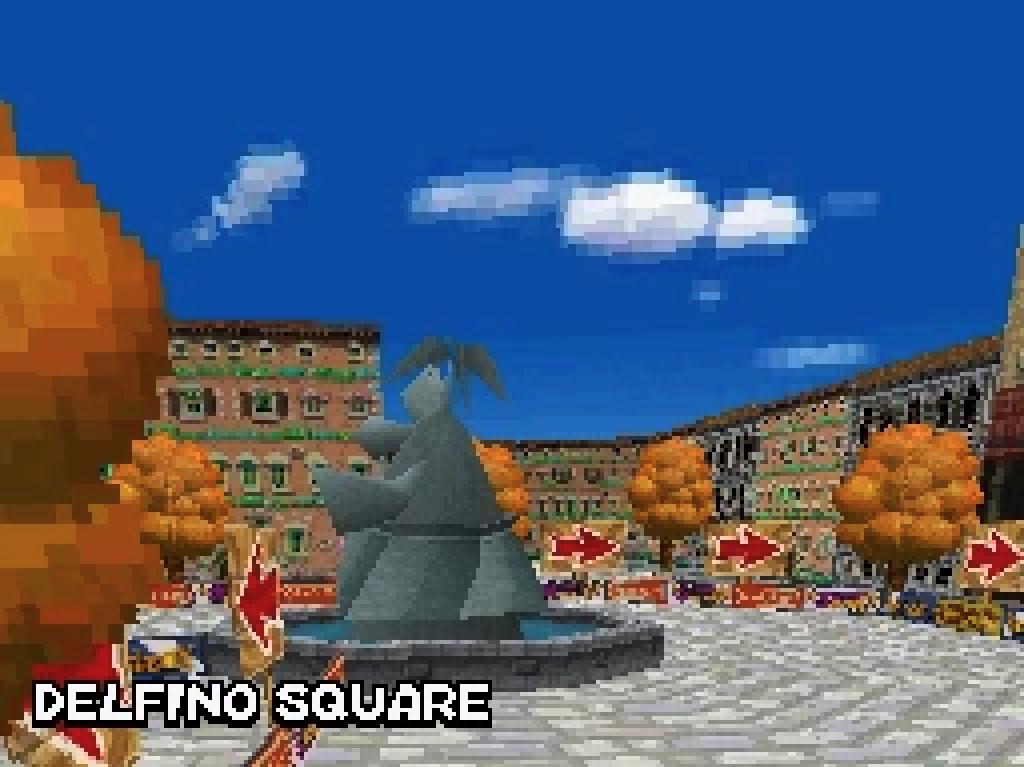 There’s obviously a lot to unpack here, and at this point just about all of it is speculation. We won’t know for sure what’s going on with this expansion until it actually releases, but it’s going to be fun getting new Mario Kart content finally, even if it isn’t exactly what us Wii U owners were necessarily hoping for. Which retro Mario Kart courses do you hope to see come to the new expansion?