When you’ve been collecting video games for most of your life, there can come a point where you basically have everything you’ve ever wanted. I’m sort of at that point now, having collected games since I was a little kid with an Atari 2600 Jr. What I tend to focus on now is completing sets. I wrote about completing my Atari 2600 color box set a few years ago, and while that particular thrill was awesome, there are still so many more to do. Trouble is, even when I think I’m done completing a set, something else tends to pop up and show me just how much farther I have to go. 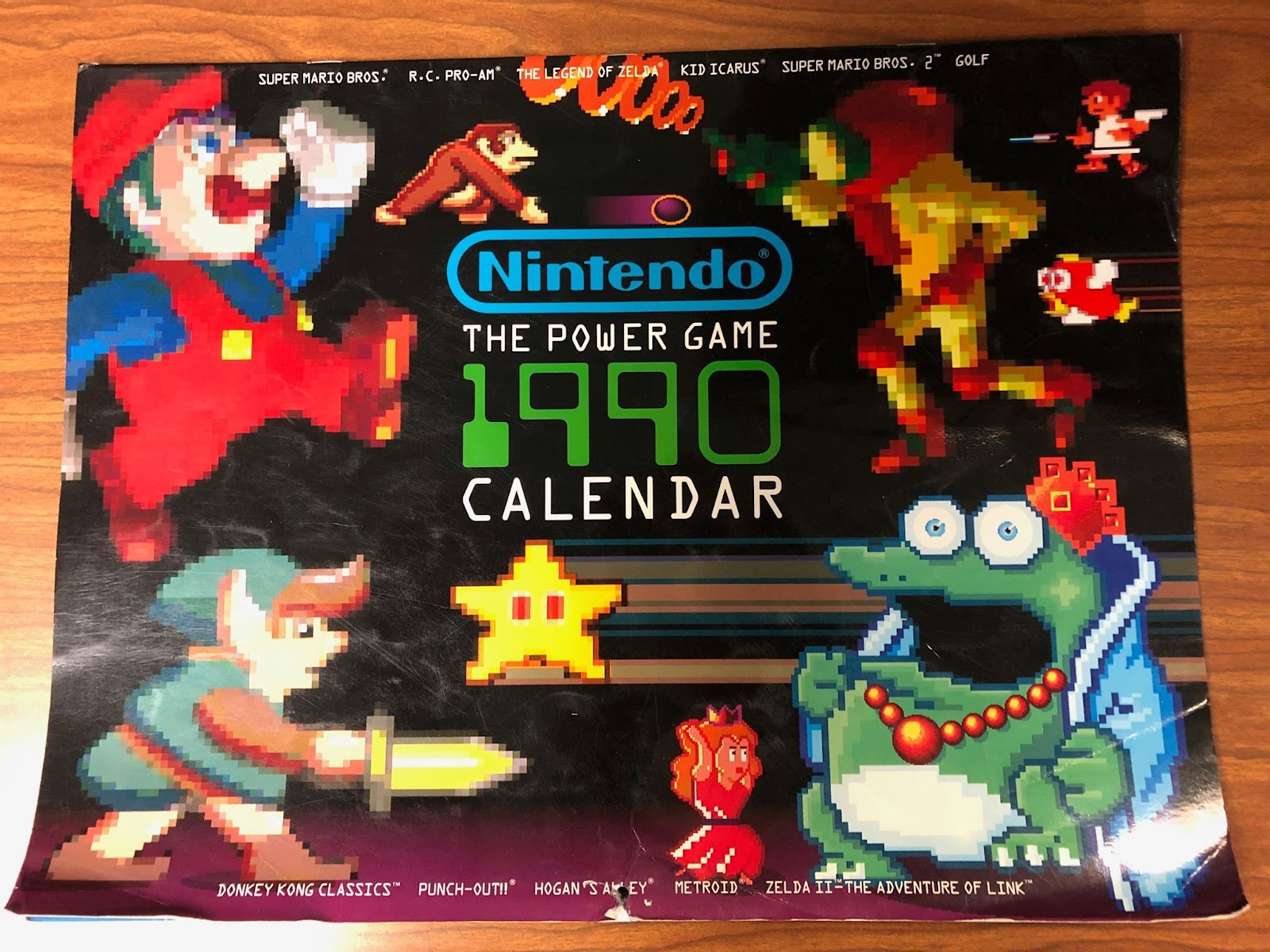 The first instance of this that’s been a thorn in my side for years in the Nintendo Power Game Calendars. I don’t remember the circumstances of how I got the first one, but I think it was at a school book fair. Regardless of how it came to be in my possession, the 1990 Nintendo Power Game Calendar was easily one of the coolest things my young eyes had ever seen. The whole calendar is made up of essentially fake screenshots of Nintendo games. When the 1991 Power Game Calendar appeared the following year, I was ecstatic. A whole new set of months to display! Then 1992 came and lo and behold, the 1992 Power Game Calendar existed! It even had Game Boy games in it this time!!

But when 1993 rolled around, there was no new Power Game Calendar to be found. I was pretty sad, but I assumed it was because they had moved on to Super NES and maybe those games wouldn’t look as cool in the Power Game Calendar style. I had three good years of calendars under my belt, so I wasn’t too disappointed. I could live the rest of my life content with the knowledge that I had all three of them, and I did for a time. And I was happy. I displayed them as often as possible, even when they were no longer valid. Seriously, the artwork is just so cool in these things. 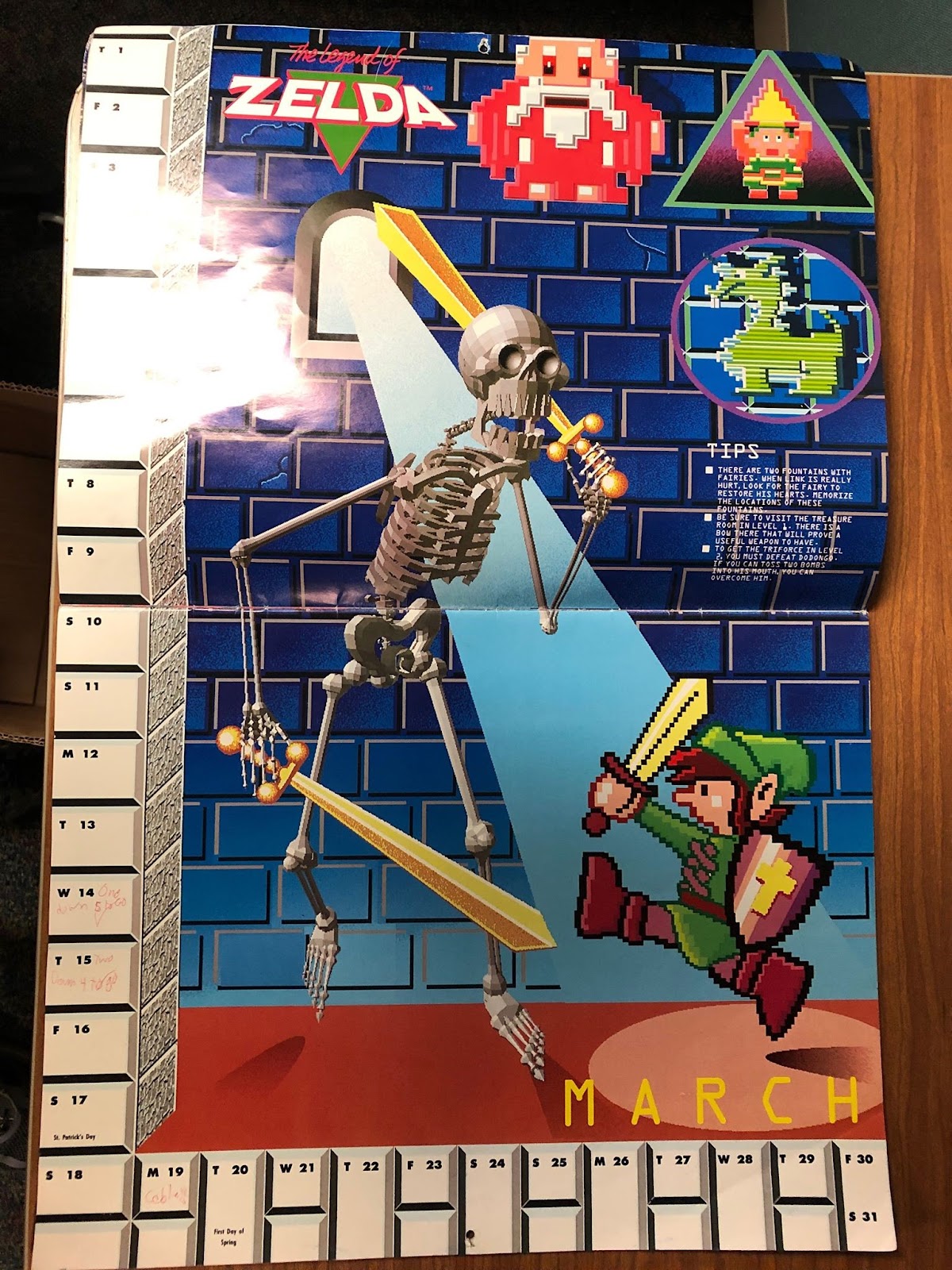 Then, I think it was three years ago, I was working on a project that involved me talking about the Power Game Calendars and I wound up doing some research into them. Trying to find out who made them, that kind of stuff. And I came across this. 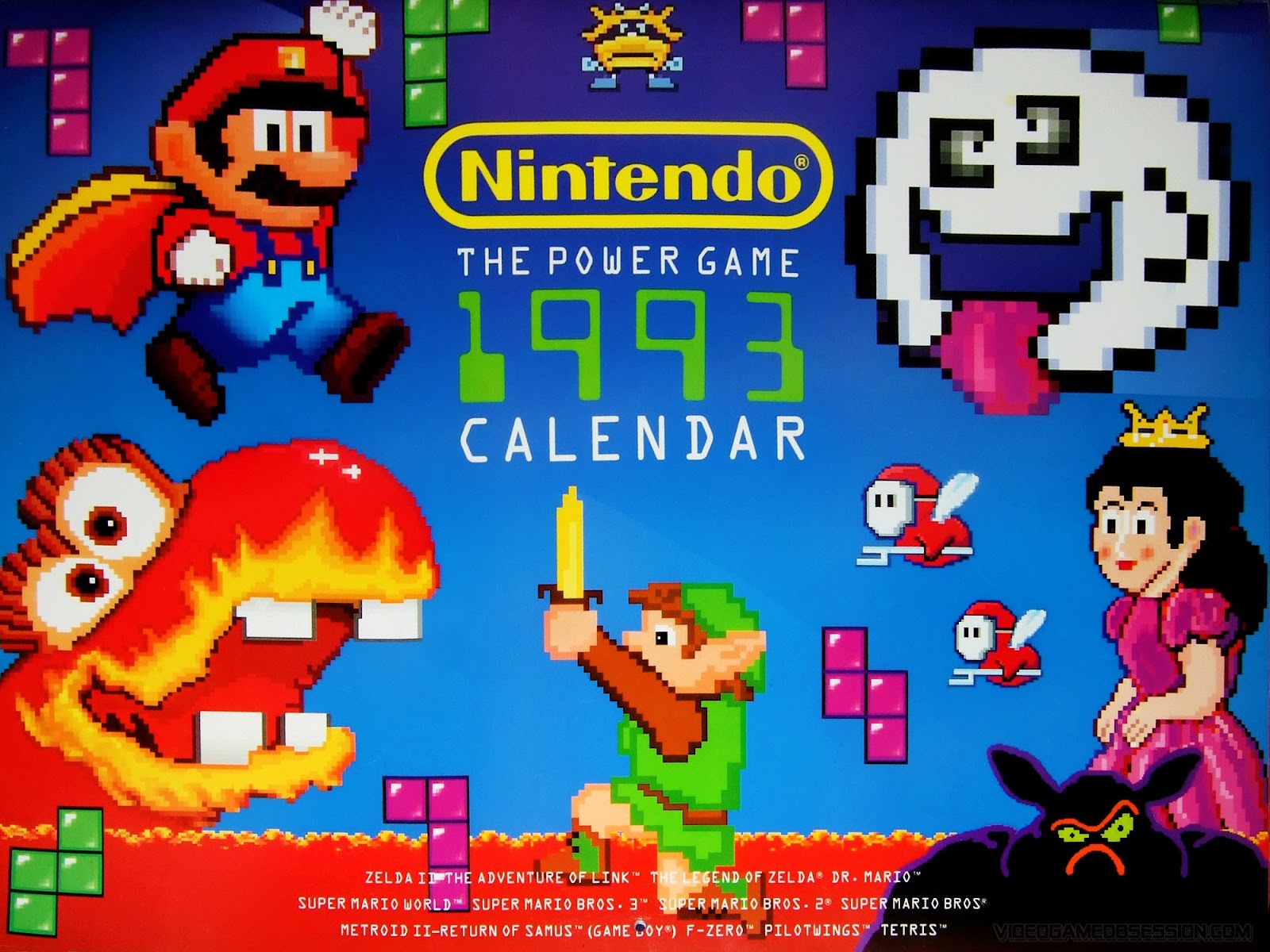 Are you freaking kidding me? There’s been a 1993 Power Game Calendar this whole time? Yes, apparently this thing is real, and it’s just as bizarre and awesome as the rest of them. It even includes Super NES games. I love it, and I want it so badly it hurts. Naturally, I set eBay notifications for anything 1993 Nintendo Calendar related, and even though I’ve had them on for THREE YEARS I still don’t own one of these things. Thanks to the reliability of eBay notifications, it seems I’ve missed two opportunities to grab this work of art, one as recently as 2 months ago.

Freaking May 4th! I was around! Why didn’t I know about this??? I try to check eBay every night before bed to see if one is listed and it somehow keeps eluding me. Thing is, I’m on a bit of a timetable with this one. Ever since last year, these calendars have been relevant again. The days totally line up now, which is great. That also means I only have the rest of this year and all of next year to find the 1993 calendar if I don’t want to miss my opportunity to have them as functional calendars again, at least for another long time. Fingers crossed that it pops soon.

This happened to me more recently than this, too. I love the Sega Saturn, and probably my favorite game on the platform is Panzer Dragoon II: Zwei. I love the Panzer Dragoon games in general, and have been very proud of the fact that I own them all for quite some time. That is, until I discovered there was a unique Panzer Dragoon released for the Tiger R-Zone. This was probably about 10 years ago. I was rooting through my collection and I wanted to get myself a picture of my 3 Saturn Panzer Dragoon games and Orta for Xbox. I couldn’t remember what years the games came out so I looked them up and I learned about the R-Zone game. I also learned there was a Game Gear game, but that was only released in Japan. So, rationalizing to myself that I’d go for a North American set, I started looking into buying Panzer Dragoon for R-Zone, and I’d look into Panzer Dragoon Mini for Game Gear sometime in the distant future. Thing was, at that time I was pretty broke, so spending more than a very small amount of money on a game that there was pretty much no chance I was ever even going to play (because it’s for R-Zone, and everything for R-Zone is terrible) just wasn’t in the cards. So I forgot about it for a bunch of years.

At E3 this year, they announced a remake of Panzer Dragoon for Switch, and it got my Panzer Dragoon itch up and running again. When I made my game room shelf a few months ago, I made sure all my Dragoon games were on it, and the franchise was fresh on my mind again. A few weeks ago on one of my nightly searches for the Nintendo Power Game Calendar, I remembered I was looking for the Panzer Dragoon R-Zone game, so I decided to check and see how much it was going for these days, expecting it to be something incredibly stupid because it’s Panzer Dragoon, and it’s not exactly common, especially complete in the box. In a surprising turn of events, I found a complete copy listed for about $20, and I immediately pulled the trigger. A few days later it came in the mail and I had done it! I completed my North American Panzer Dragoon set! Now all I had to do was start hunting for the Game Gear game and I’d have all the Panzer Dragoon games there are. (I’m not buying regional variants. That’s just not my flavor of crazy.) I snapped a picture of my games all together and went to post it in this Sega Saturn collectors Facebook group I belong to, and I was as happy as a clam. Fun side story time, then I decided to hop on Twitter for a moment, and I saw this. 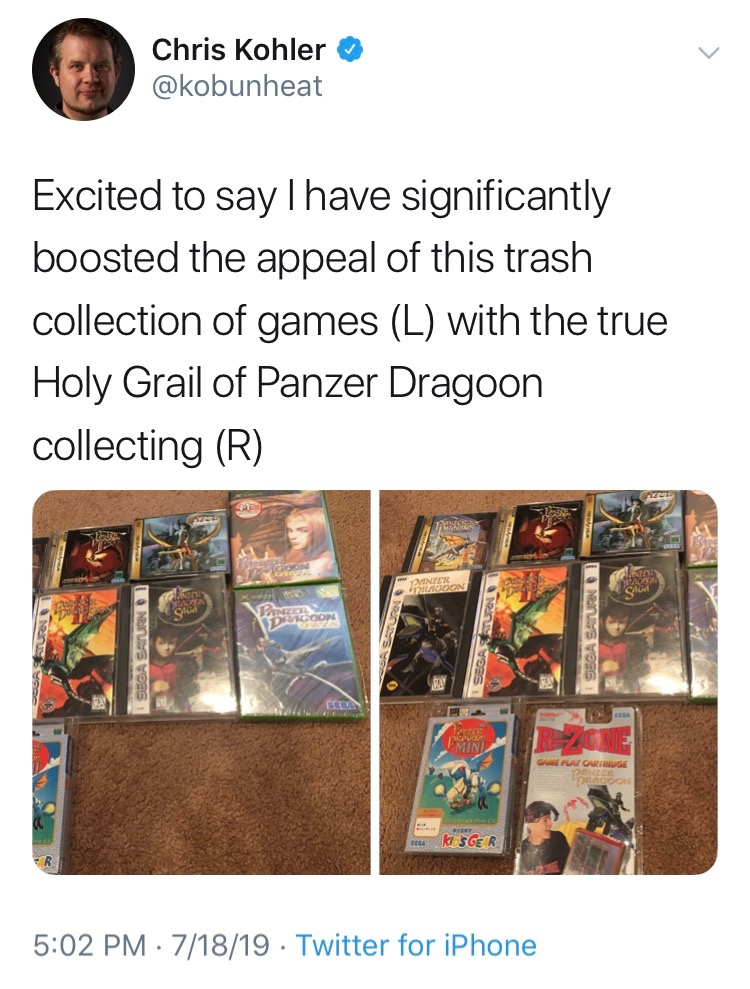 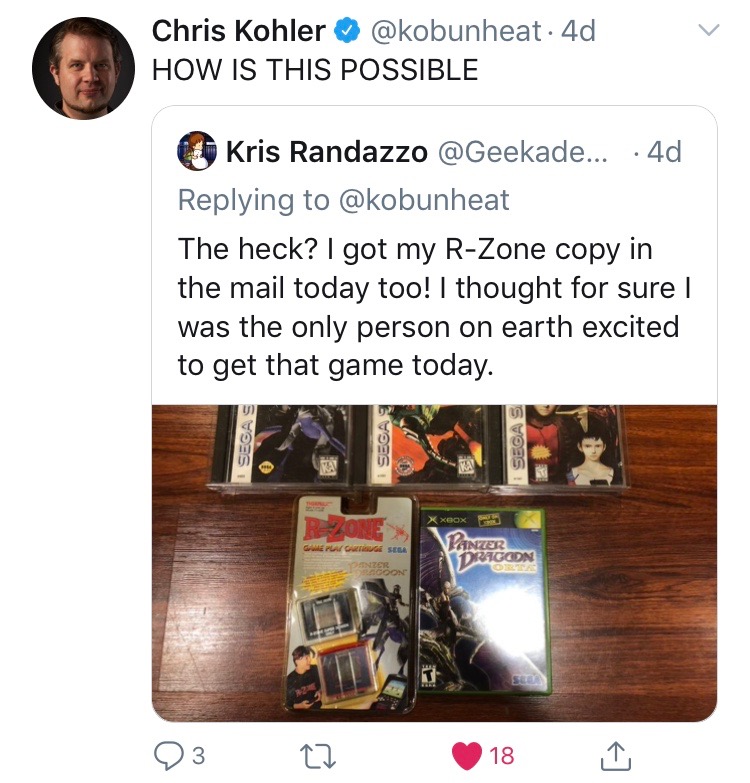 After this fun little Twitter exchange, I noticed I had some Facebook notifications, so I checked them out and I was not prepared for what I saw.

A handful of folks in the Saturn collectors group were congratulating me on my find, and a few others were telling me I still needed the Japanese Game Gear game (even though I specified it was a North American set). But that’s hardly out of the ordinary. No, what surprised me was that one commenter said I didn’t have a complete US set yet, because I was still missing this. 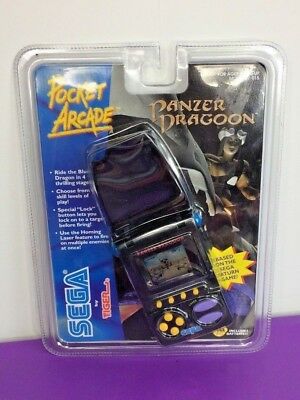 What the actual heck is this? I have never even heard of this before, nor is it listed on the Panzer Dragoon Wikipedia page as an entry in the series. I can’t find very much info on the thing, but based on what little I’ve gleaned, it seems like it’s just the same game as the R-Zone release, just with black graphics instead of red, and a cool background like other Tiger LCD games. But I’ll never know for sure until I get my hands on it.

So for a brief couple of hours, I thought I had finished my Panzer Dragoon collection. Now I have to find this dumb thing. And I guess I should grab the PC version while I’m at it, too. No sense in not going completely crazy at this point, right?

LCD games are a much more frequent pain in my backside than I ever thought they would be. I never liked the things, even when I was a kid, but they stand as consistent barriers whenever I think I’ve finished off a collection. I thought I had all the Zelda games for a while, until I remembered there was a Zelda Game & Watch, and a literal wrist watch by Nelsonic. I finally managed to get them both, but it took a lot more effort and luck than it should have. I was certain I had all of the Metal Gear games, until I learned there’s a Tiger LCD Game Talk version of Snakes Revenge. I thought once I got my copy of Mega Man Soccer for SNES that I had completed my Mega Man collection, but there’s still 2 terrible and ludicrously expensive MS DOS games, 2 Tiger LCD games, and let’s not gloss over this little number. 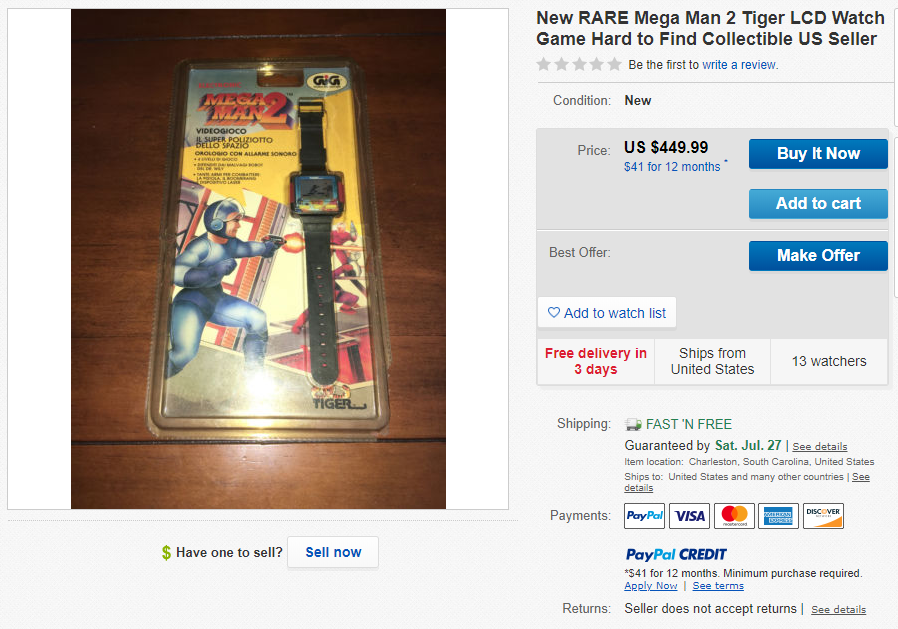 For the low, low price of $450? Guess I’m never finishing off that particular collection. I’m crazy, but I’m not that crazy.

So the moral of the story is, there’s always something else to collect. No matter how complete I think a collection is, there will always be something else I’m missing, some other piece of weirdness I have to track down. Sometimes, well, most times, it’s infuriating because the last pieces of the puzzle always seem to be the crappiest. But there’s a certain degree of fun to it too because yes, they’re awful, but they’re also super interesting.

What weird stuff has prevented you from completing a set?