As the story goes, a long time ago Nintendo was struggling to break into the video game market, particularly in the US. Their games up to that point had largely been clones of existing games, and their latest Space Invaders knock off, a game called Radar Scope, fared more or less okay in Japan but landed with a deafening thud in the US. The arcade market over here was pretty much over Space Invaders clones at that time, and even though Radar Scope was kind of a cool one with a neat 3D-ish perspective, it didn’t have what it took to catch on. 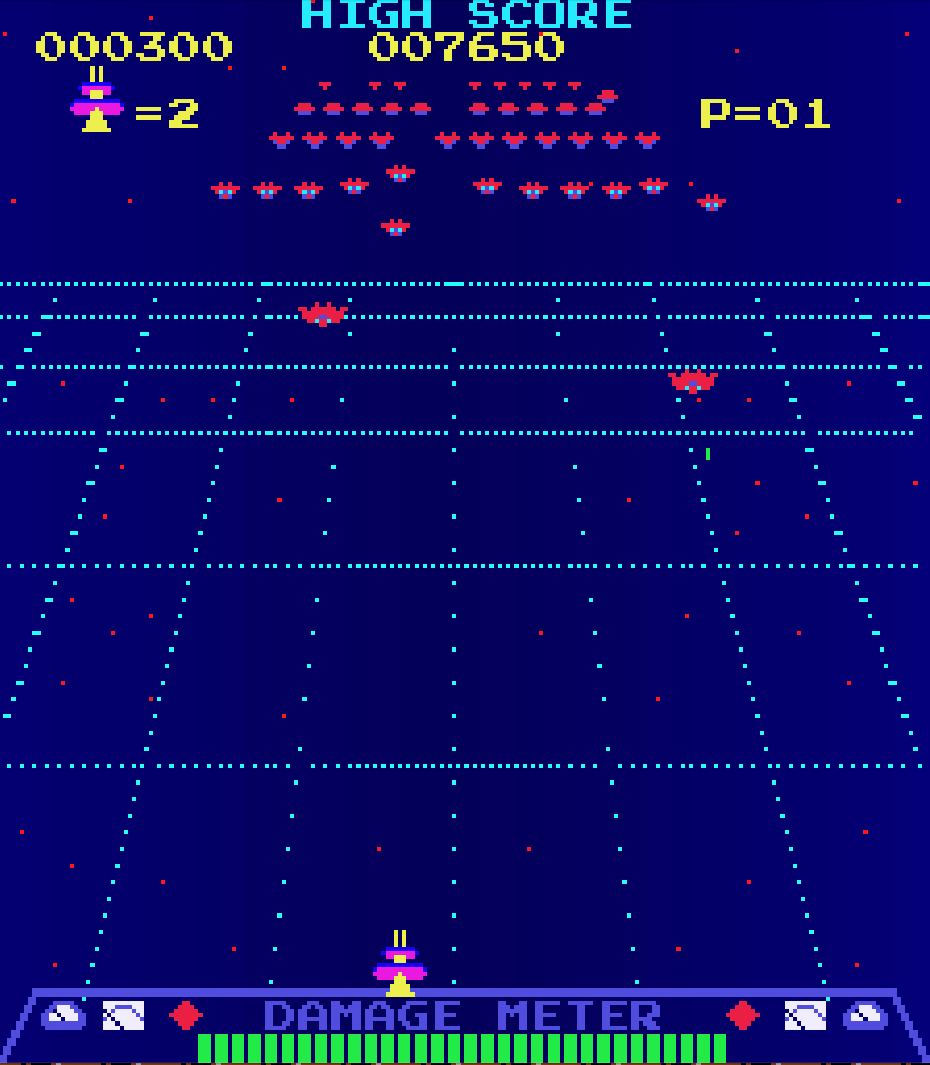 Nintendo president Hiroshi Yamauchi tasked one of his young programmers to create a game that unsold Radar Scope cabinets could be converted into easily so they wouldn’t have to take quite so much of an expensive loss on unsold units, and that task fell to one Shigeru Miyamoto. His idea was to make a game based on the cartoon Popeye, which Nintendo was already in the process of striking a licensing deal with to make other toys and playing cards based on. I can’t believe I have to write this because wow does it make me feel old, but perhaps Popeye the Sailor Man needs an introduction because he isn’t exactly what I’d call a relevant brand these days.

Popeye The Who Now?

So if you’ve never heard of him, Popeye was a cartoon character who first appeared in 1929. His cartoons maintained popularity through the early 80s and 90s when cable networks replayed them alongside classic Looney Tunes and Tom & Jerry stuff, and there was even a feature film starring Robin Williams in 1980. (That movie was a whole different can of spinach, but the fact that it existed still said something for the brand’s relevance).

Popeye was a sailor who had a rather unique way of speaking, or mumbling really. He had a love interest named Olive Oyl, whose affections were often also being chased by Popeye’s nemesis Bluto (or Brutus, which is anotehr weird sutuation, but for the sake of consistence let's just call him Bluto). Bluto was another sailor but he was brash, mean, and massive. Just a really big strong bad guy. Popeye wasn’t much of a physical match for Bluto on his own, but if he happened to eat a can of spinach, Popeye would effectively gain super powers and become more than capable of going toe to toe with the giant brute and win Olive Oyl’s affection, and that’s pretty much the formula the show followed episode after episode.

Arcade History in the Making

This sounds like a pretty good premise for a video game. Olive Oyl has been kidnapped by Bluto, and the mostly defenseless Popeye has to go save her, picking up cans of spinach as power-ups along the way. Nintendo sure thought so, anyway. Unfortunately, Nintendo couldn’t score the licensing rights from King Features in time, so Miyamoto went ahead and did the next best thing. He replaced the characters with ones vaguely inspired by King Kong. The details on exactly how this all went down are a tad murky, especially considering how close the Popeye Game & Watch’s release was to the arcade game, but it’s not hard to fill in the blanks yourself. Damsel in distress Olive Oyl became “Lady” who was later named Pauline, Popeye became a carpenter called Jumpman, later renamed Mario, and Bluto became the giant ape Donkey Kong. And thus, history was made. 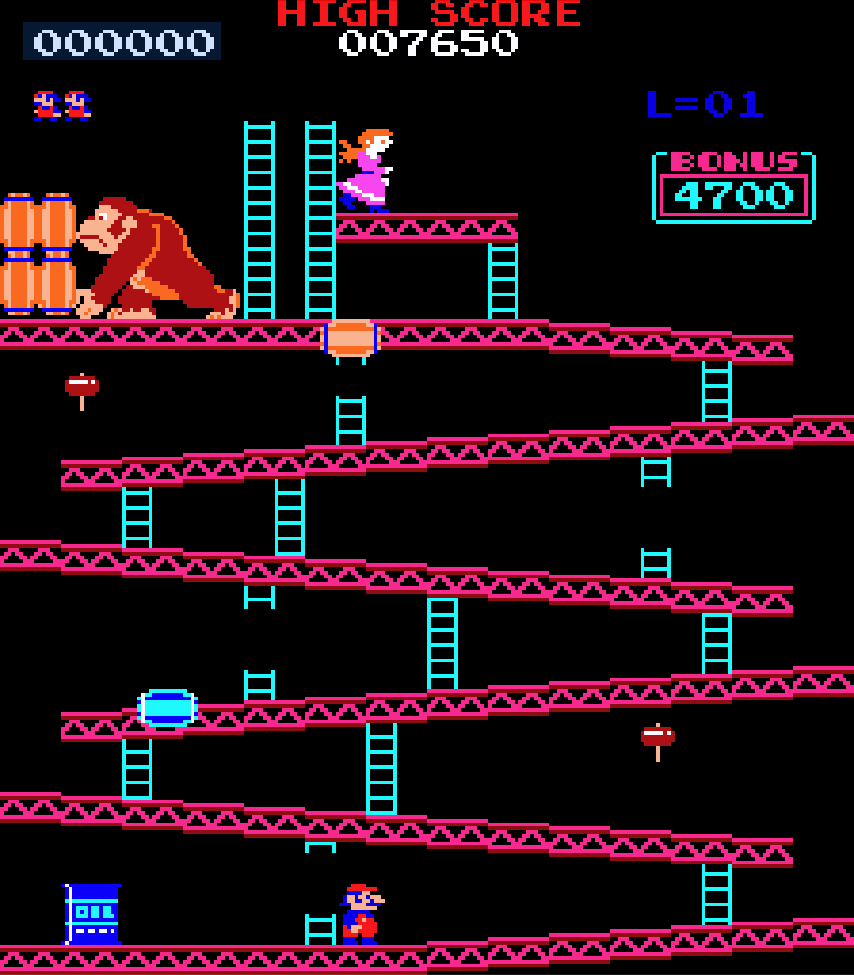 Donkey Kong was a huge hit for Nintendo, and as we well know spun off into Mario Bros., which itself spun off into Super Mario Bros., which changed the face of gaming forever. Nintendo didn’t give up on Popeye though, and eventually did manage to get the rights to make a Popeye game, which they did to great effect. Popeye hit arcades in 1982 and boasted some of the most impressive sprite work ever seen to that point. The characters were remarkable likenesses of their cartoon counterparts, and helped earn the game moderate success. Its home conversion in Japan was one of the earliest games released for the Famicom, and while it didn’t really capture the magic of the arcade original’s visuals, it was still a pretty solid conversion of a relatively recent arcade hit, and helped sell Japanese audiences on Nintendo’s fledgling home console. 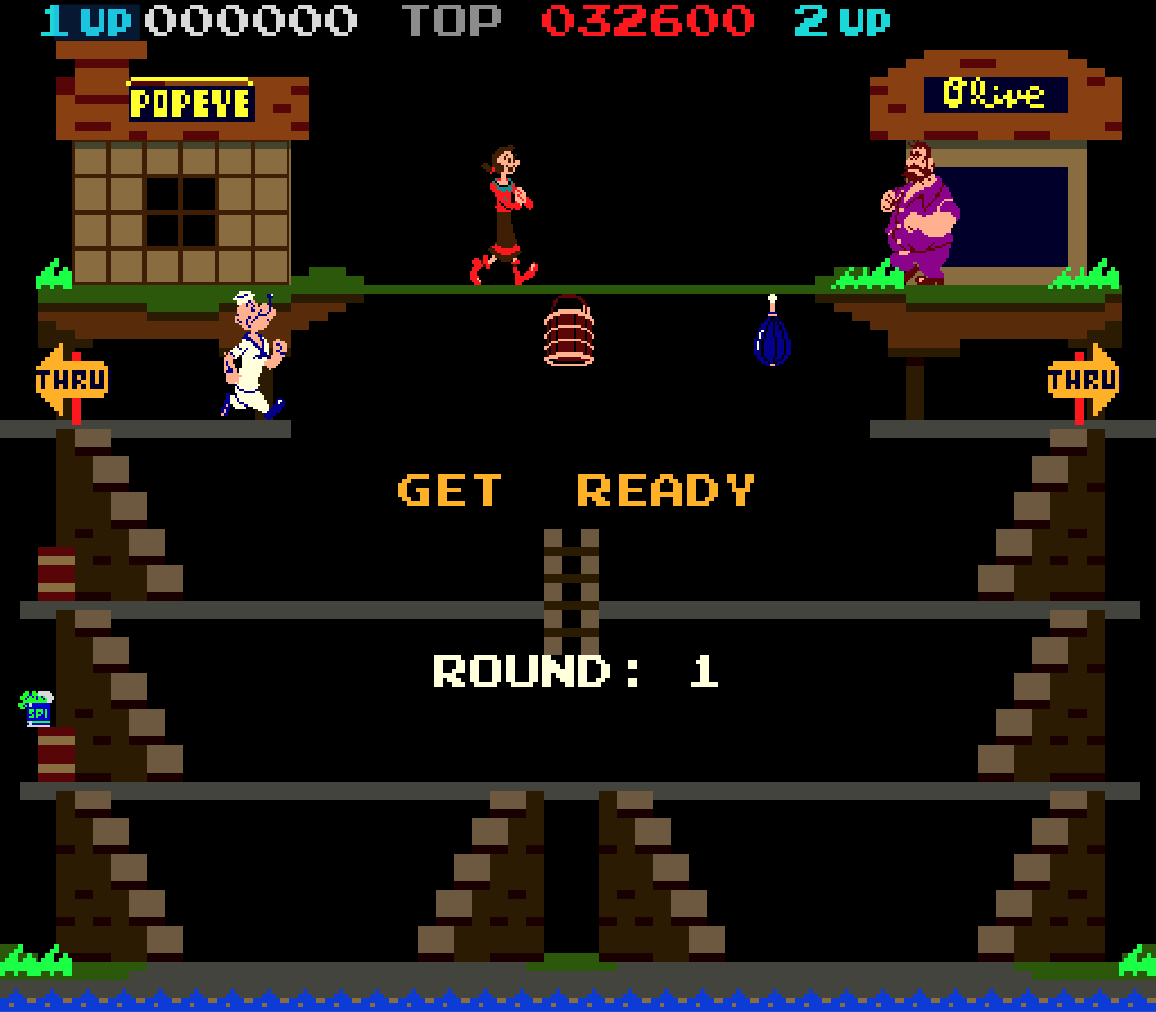 What this is all getting at is Popeye is an incredibly important brand to Nintendo's history, and as of this writing is one that’s basically completely lost to time. Eventually Nintendo’s contract with King Features expired and the Popeye game rights wound up in the hands of a company called Sigma, and there hasn’t been much of anything resembling a worthwhile Popeye gaming experience since. This includes Nintendo’s own popular Popeye arcade game which hasn’t seen any ports to any consoles since the NES conversion back in 1986. Neither the NES game or the arcade original it’s based on has been re-released in any fashion, and that’s a real shame because while it isn’t the best game Miyamoto has ever lent his talents to, it’s still a pretty good time, and a game very much still worth playing today. The trouble is, it’s extremely unlikely that the cost of obtaining the rights to release the game on any download services would be worthwhile considering that the Popeye brand is basically a non-entity today.

And that’s why Nintendo should just go ahead and purchase the property outright. Now, I’m not usually big on the whole “one company owns everything” concept, but this is one of those few exceptions that I think makes a ton of sense, especially today. Nobody has done anything of value with Popeye in quite some time. There haven’t been any new animated or live action projects that have gotten off the ground in over a decade, and the recent Popeye game released in 2021 for Switch and PlayStation 4 was pretty much a disaster. 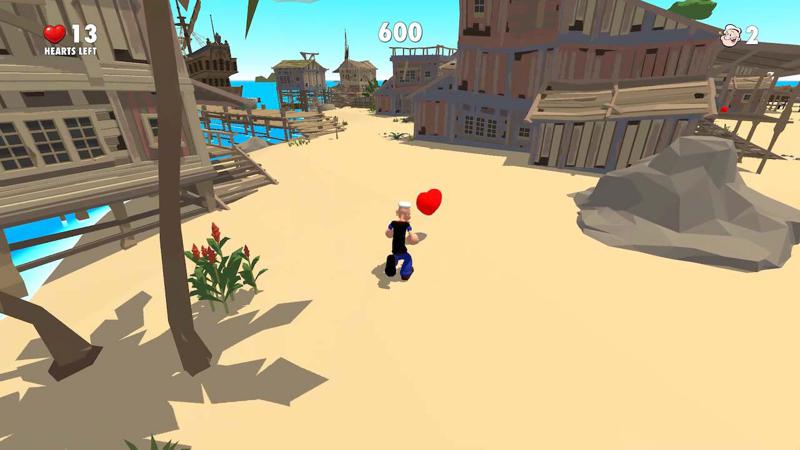 Now, as you may have heard, Nintendo has officially opened a movie entertainment division called Nintendo Pictures to go along with its upcoming Super Mario Bros. movie with Illumination Studios. They’re clearly looking to make some moves in the entertainment industry, and what better way to follow up a Mario movie than with a Popeye revitalization project?

I’m sure the brand isn’t exactly inexpensive, but it’s no Mickey Mouse either. Nintendo’s got quite a lot of money in its bank, and they could do some real good with the property. Not only could they finally re-release their classic arcade version and NES port, they could make new Popeye games, finance new animated series, movies, and more. The basic archetypes of the Popeye license are timeless. Sure, the military sailor motif has changed quite a bit over time, but that wouldn’t take much to tweak to jive with modern relevance, and then Popeye, Olive, Bluto, Wimpy, Sweet Pea, and more could find a whole new life.

Of course, I’m no expert. I don’t know thing one about what’s involved in purchasing a character’s rights, but from my incredibly ill-informed perspective, it makes way too much sense for Nintendo to purchase Popeye outright. If for no other reason than the brand is on the verge of being forgotten, especially in terms of Nintendo’s history with it, and that’s just not cool.

So what do you think? Am I crazy? Would you like to see Nintendo purchase Popeye? Do you like canned spinach? Let us know!