A while back I wrote about my time with a game called Axiom Verge. It took me a good long while to play the game to conclusion, not just because it wasn’t on any platforms I had at the time, but because of what everyone kept telling me about it. All I heard was “It’s basically Metroid.” or some variation thereof. Now, I love Metroid games. They’re some of my favorite titles of all time. But when you say that a game might as well just be a new Metroid game, that comes with a certain set of expectations. I feel going in that I have a basic understanding of how the game should feel to play. However, when I first played Axiom Verge, it immediately didn’t feel like Metroid to me. It felt wrong because I was expecting Metroid. I was expecting Samus’s weight and maneuverability, and all that felt very different. As it turned out, once I managed to get myself out of the Metroid mindset, I realized that Axiom Verge is very much its own animal. Sure, it’s heavily inspired by Metroid, but it does things Metroid not only would never do, but could never do. Axiom Verge is a masterpiece, but it isn’t Metroid. 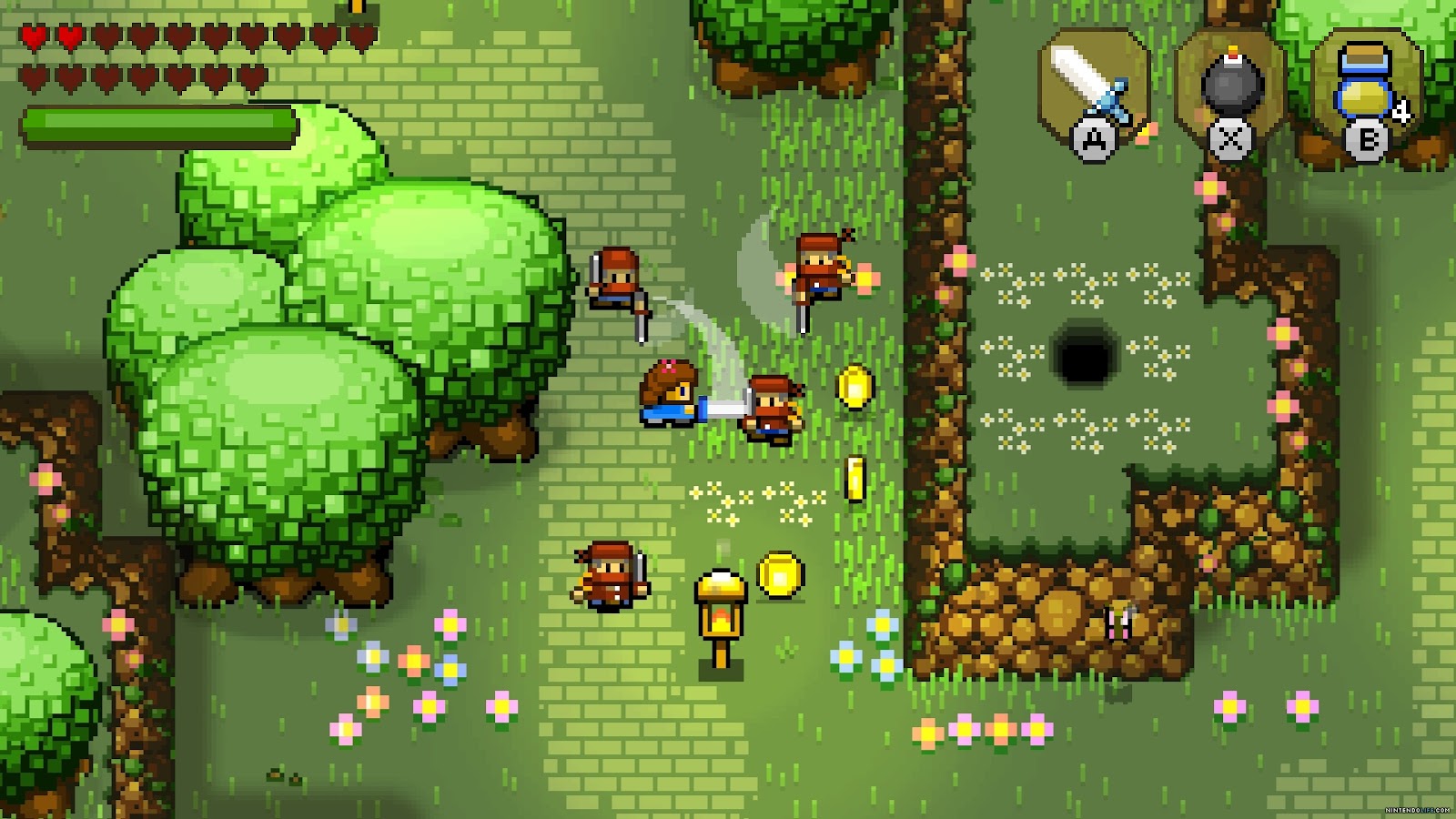 This year I had the pleasure of playing through another game that followed a similar pattern for me. Everywhere I looked, folks were saying that Blossom Tales is “basically A Link to the Past.” It certainly looked the part, but that is some pretty darn high praise. Much like Axiom Verge, I was hesitant to dive into something that was just imitating one of my favorite games of all time. And much like Axiom Verge was to Metroid, Blossom Tales is more than just a Zelda clone.

You would have thought I learned my lesson with Axiom Verge, but no. I went into Blossom Tales with a set of expectations, and when they weren’t met, the game immediately turned me off. There are a lot of visual cues taken from LttP, and more than a few structural ones too, but it’s more done as an homage than a straight up rip off. Take, for example, the way the game’s story is told. The whole thing is narrated in a sort of Princess Bride manner, with a grandfather telling his grandkids the tale of Lily and her adventures in the Blossom Kingdom. The grandpa actually starts to tell them the story of Zelda, but the kids cut him off saying something to the effect of “not that one again!” It’s quite charming. 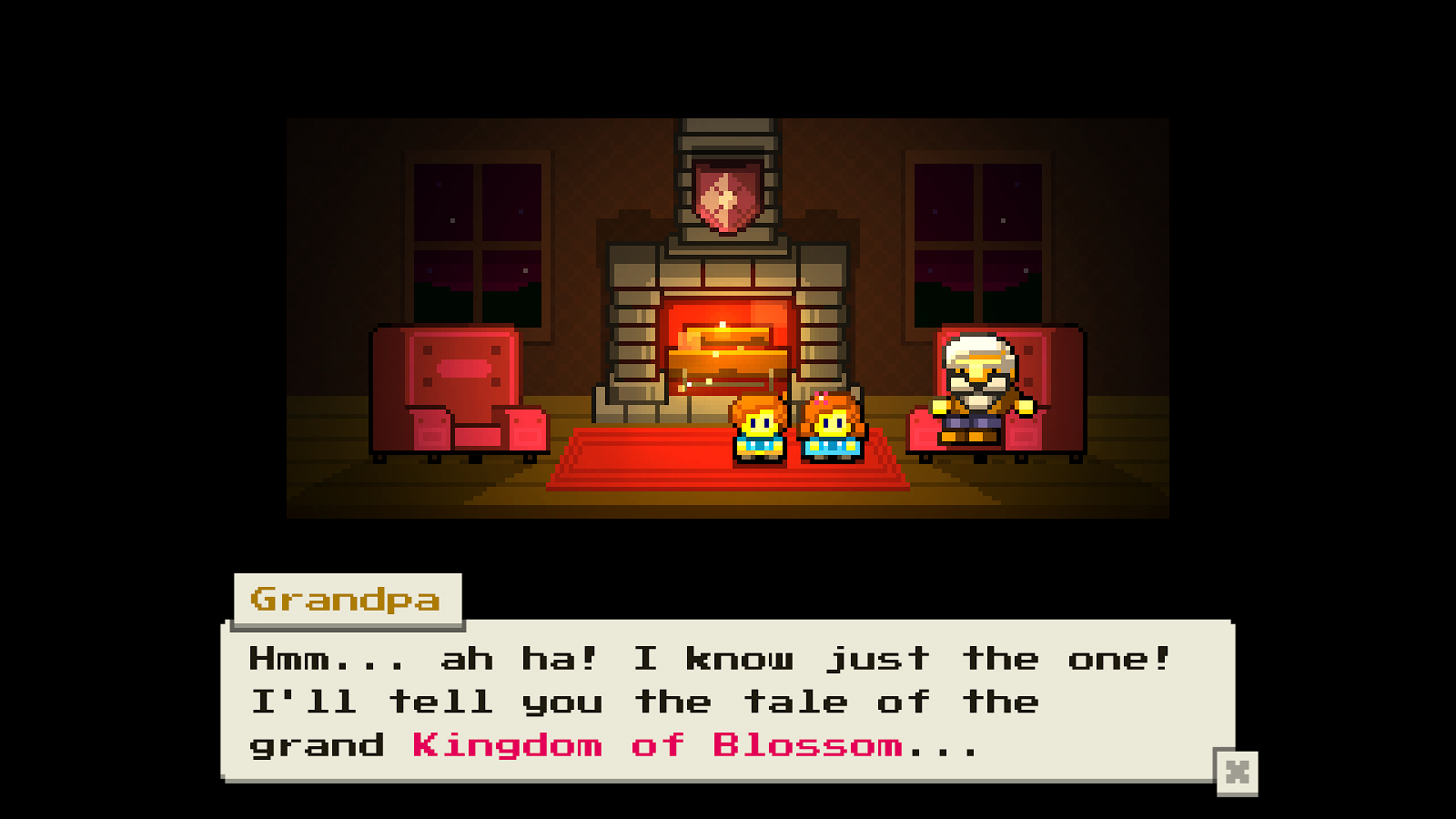 This storytelling method is quite a big part of why I loved this game so much. First of all, each time you start the game, you start with the Grandpa picking up where you left off, basically reminding you where you were when you last saved your game. This has been invaluable to me as I would sometimes go long stretches between plays. (Games like Runner 3 and Bomb Chicken demanded my attention. Priorities, man!) The other thing about this that’s so cool is that there are occasional bits where Grandpa forgets how the story goes, and it’s up to the kids to choose what happens next. Will you be attacked by ninjas or wizards? You get to pick, and then that’s the enemy that shows up to fight you. It’s not overused, and it’s really cool when it happens. 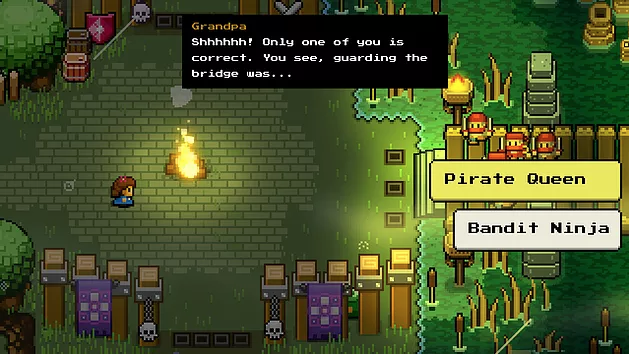 As for actually playing the game itself, one of the first things you’ll notice if you’re a LttP fan is how much looser it feels. Your movements aren’t very precise like Link’s, instead allowing for a much more fluid sense of movement. You can swing your sword while still moving, which is very nice, but the drawback is that freedom will sometimes lead you to take hits from running into things when they aren’t immediately defeated by your sword swings. Projectiles quickly became my best friend, but those items also worked very differently than they did in Zelda.

Sure, there are things like potions and stuff that work like a typical item, but most other things actually run similar to the runes in Breath of the Wild. Bombs, Arrows, boomerang tosses, and other such things are fueled by a green gauge that refills every few seconds. This is great because you never have to worry about being out of bombs when you need them, or not having any artrows when you need to hit a far away target. You can increase your green gauge by finding these green crystals hidden throughout the world. Just like heart pieces (which are also in the game) once you find 4 of them, the gauge gets bigger. You will need to develop a strategy of occasionally hanging back though, because toward the end of the game there can be dozens of enemies attacking you at once, and only so many boomerang tosses available to you before having to wait to replenish your gauge. Still, It’s a good system that doesn’t leave you cutting down bushes and breaking pots for constant farming.

Of course, I still cut down bushes and broke pots, not only out of habit, but because that’s where the money and health refills are. And it’s really fun. 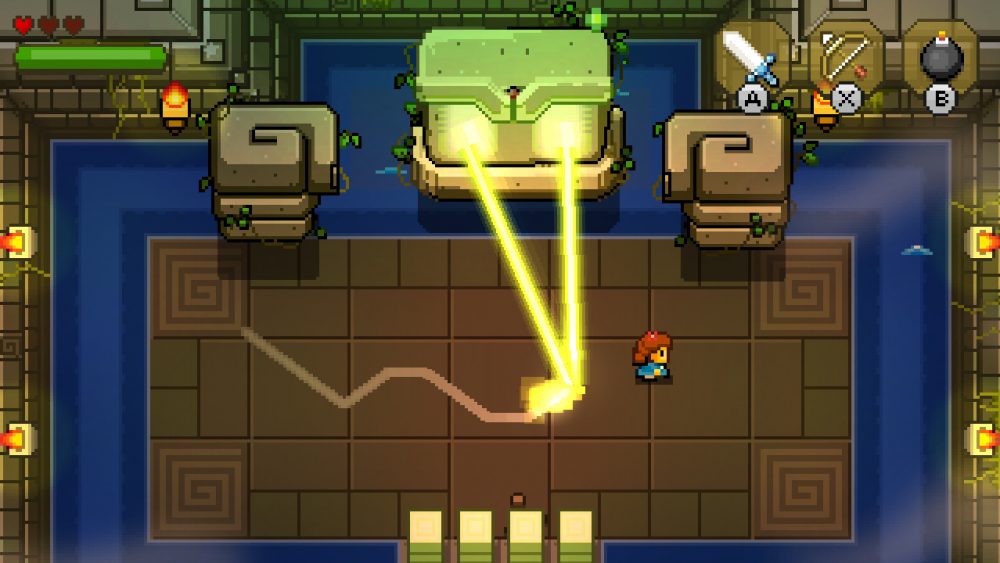 I have to also mention that the dungeon puzzles are really well done here. It’s not that they’re the types of things Zelda games couldn’t do, but sometimes they are things you haven’t seen them do before. There are these really fun recurring puzzles where you have to walk on all the spots in a path without stepping over your path that I always enjoy when I encounter them. The game really nails those “Ah-ha!” moments, and I always feel really good when I figure something out. They aren’t always obvious either, at least to me. I’m not ashamed to admit I’ve turned to an online guide once or twice when I got stuck. They often incorporate items in really smart ways. I remember doing more than a few cool things with my boomerang.

I’m about to enter the final dungeon and face off against the evil wizard in my playthrough, so I can’t speak to the game’s ending, but all the bosses I’ve encountered so far have been fun and memorable. If you have a Switch or a Steam account, I really recommend you give this game a try. But don’t go in expecting LttP. Liek Axiom Verge before it, Blossom Tales really shines when it’s judged on its own merit, of which it has plenty. Now go save the sleeping king! 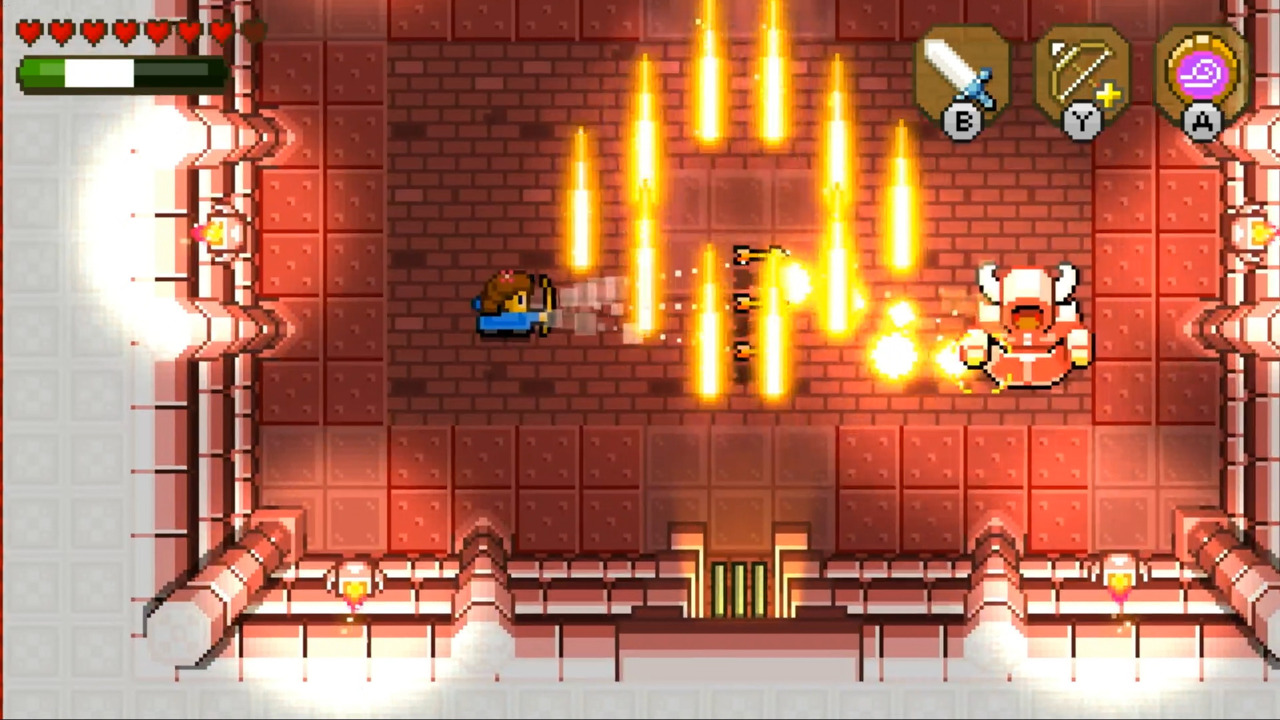 So, after recording this week’s podcast, I did, in fact, finish off Blossom Tales. There was one room that gave me some real trouble because of the somewhat floaty controls, but the miniboss and final boss battles were fun and memorable, if a little on the easy side. I will say that I was a bit let down by the ending of the game. Considering how well the story had been told up to that point, I kind of expected something a little more in line with LttP’s ending, maybe showing me how all the characters I met along the way are doing now that I’ve saved the kingdom. Of course, maybe that’s because the game lets me play around in the world post-quest to search for secrets and whatnot. It’s presented as something along the lines of “Just because the bad guy is defeated, doesn’t mean all his evil has immediately left the land.” Which is really cool. I have way too many games on my plate to make finding all the game’s secrets a priority right now, but it’s nice to know that if I want to I can do that without starting the quest over. But I also don’t think there’s a “real ending” hiding at the end of all this. But who knows? I could be wrong.

At the end of the day, I’m not going to be going back to Blossom Tales the way I go back to A Link to the Past. But I will go back to it someday, just like Axiom Verge. And more importantly, I’m glad I put myself in the mindset of judging the game against itself instead of its inspiration. Blossom Tales is a really great game.