Ports, amirite? There’s so many darn ports, especially on the Switch! Where are all the new games at?

I’m absolutely not here to tell you the current port to new game ratio isn’t problematic. It’s clearly working out pretty well for Nintendo, but the distinct lack of actual new games in comparison to how many Wii U and now even 3DS games are coming out on Switch is worrisome, especially for those of us who owned and thoroughly enjoyed those platforms.

However, the rate at which ports are coming out I would argue is actually right where it should be. It naturally would be better if they were also accompanied by more new games, but ports, especially right now are incredibly important. 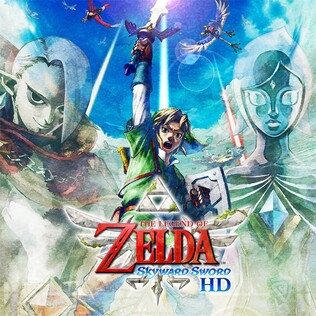 With the impending 35th anniversary of the Metroid series, I found myself with an undeniable urge to play some Metroid games. It’s been a while since I’ve seriously played through anything other than Super Metroid, and as I embarked on a journey to introduce my son to Metroid properly it became increasingly apparent that these games are a perfect example of why games need ports to modern systems.

Let’s start with the original Metroid. I like to mess with this game pretty frequently on Switch. The rewind feature makes some of the ridiculously unfair segments a lot more manageable. Nobody likes falling down a hole and having to bomb your way back out over and over. But if I’m being honest, the best way to play the original Metroid is Metroid: Zero Mission for Game Boy Advance. It stands to this day as one of the very best remakes of all time, and it fixes just about all the genuine problems the original Metroid has, especially its lack of a map. 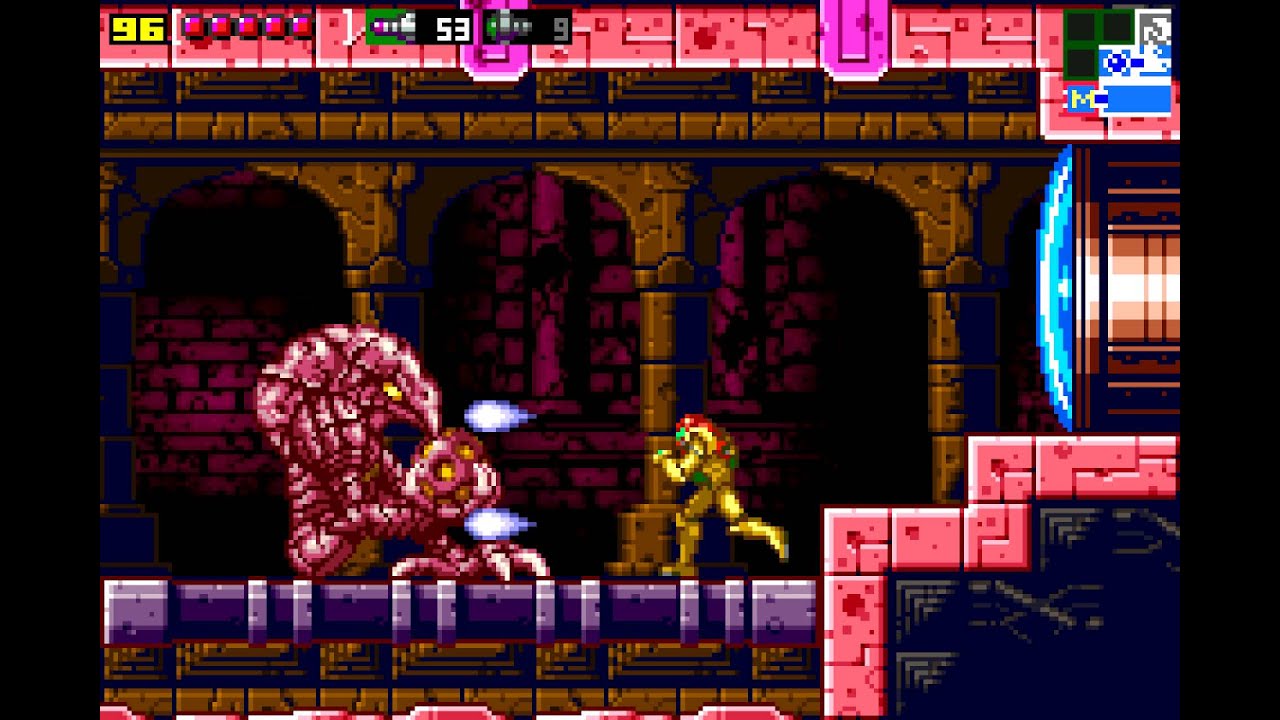 So when properly introducing Metroid to my son, I did so with Zero Mission. He had seen me play around with some key moments in the NES version over the past few months on the Switch, like Kraid, Ridley, and the ending, but for the most part his knowledge of the franchise came from Smash Bros.

Thankfully, Metroid: Zero Mission is available on the WiiU, which currently stands as the best way to play that game. The WiiU Virtual Console is fantastic for Game Boy Advance games, a fact that I often forget because of the nature of Game Boy Advance games themselves. Whenever I think of playing those games I think of cramped screens, blocky graphics, and of course incredibly low fi sound.

So while Zero Mission looks and plays brilliantly on WiiU, some pretty big problems persist, and these issues would be solved were the game to be properly ported to a modern console instead of just being available in its original form.

As such, while I’d be lying if I said Zero Mission didn’t look great on the WiiU, the GBA’s screen size created a visibility issue. Viewed in a vacuum, it’s not a very big deal, but when played next to something like Super Metroid which has the benefit of a full sized TV screen on its side instead of the GBA’s weirdly shaped screen, the world seems to just have more room to breathe around you, even in 4:3. 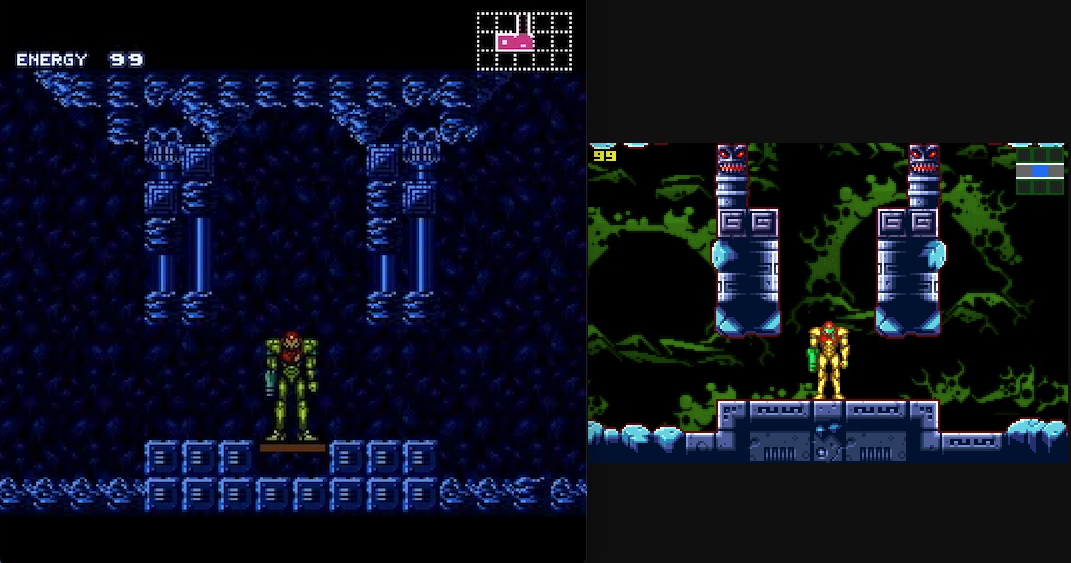 Then you have the issue of controls. The Game Boy Advance didn’t have enough buttons to give all of Samus’s functions their own dedicated inputs. So you wind up with having to manually aim downward diagonally, for example. It works fine given the limitations of the time, but when playing on a WiiU Pro Controller with all the buttons you could need it still feels a bit cumbersome.

Finally, and possibly most importantly, you have the sound. The GBA is home to some incredible soundtracks, Zero Mission being one of them, but they’re all severely hampered by the GBA itself. Everything is intensely low fi and crunchy. It always feels like you’re listening to something great through a wall or inside a cup of coffee, and it’s a huge bummer. 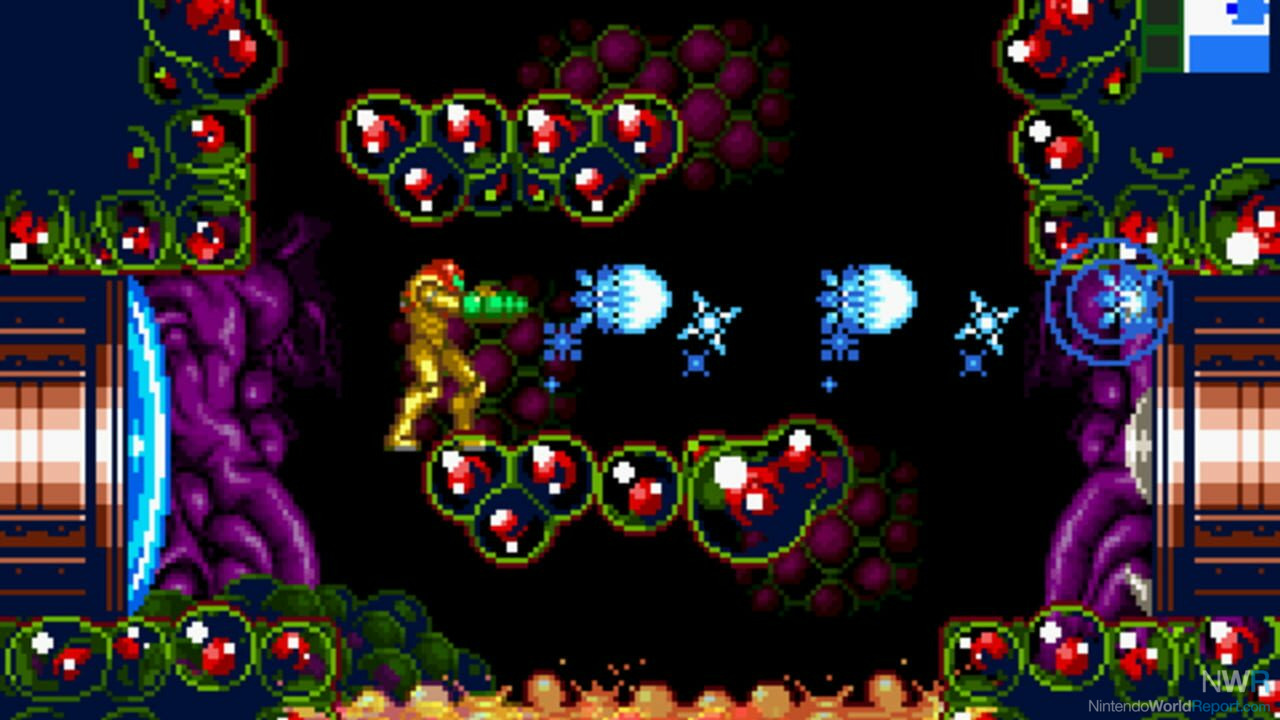 Now, imagine a proper port to Switch. I’m not even saying they would have to go as far as they did with Link’s Awakening. The game doesn’t necessarily need a full on remake because its sprite work is honestly just fine as is. Not that I’d kick a proper remake out of bed for eating crackers as they say, but it wouldn’t be necessary. A remaster that allowed the game to be played in a proper standard aspect ratio, mapped the controls for a modern controller, and remastered the sound so it didn’t sound crunchier than trying to open a package of Oreos, would mean we’d finally all be able to play this masterpiece the way it should be played.

After we beat Zero Mission, we moved onto Metroid II, and once again the best way to play that game now is through its incredibly well done remake Metroid: Samus Returns. A game that’s currently stranded on 3DS. 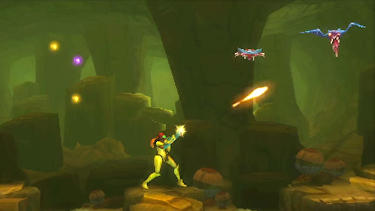 Samus Returns has the benefit of being the newest Metroid game in the franchise, and introduces some positively brilliant mechanics that make use of modern things like analog sticks. But as a 3DS game, it presents some other issues that would once again be solved by being ported to Switch.

First, there’s the visuals. Games like Samus Returns are very nice-looking 3DS games. They wouldn’t exactly be pushing the boundaries if left to their own devices on the Switch, but because they were created for the 3DS, the developers put a lot of work into making sure the art direction could carry the visuals since the actual graphical power likely wouldn’t impress without some really solid art. So when playing Samus Returns on 3DS now, it’s impossible to look at it and not constantly imagine how much better it would look in HD, and how much I wish I was playing it blown up on a TV rather than on my little 3DS screen. There are so many tiny details in the background that deserve to be seen. 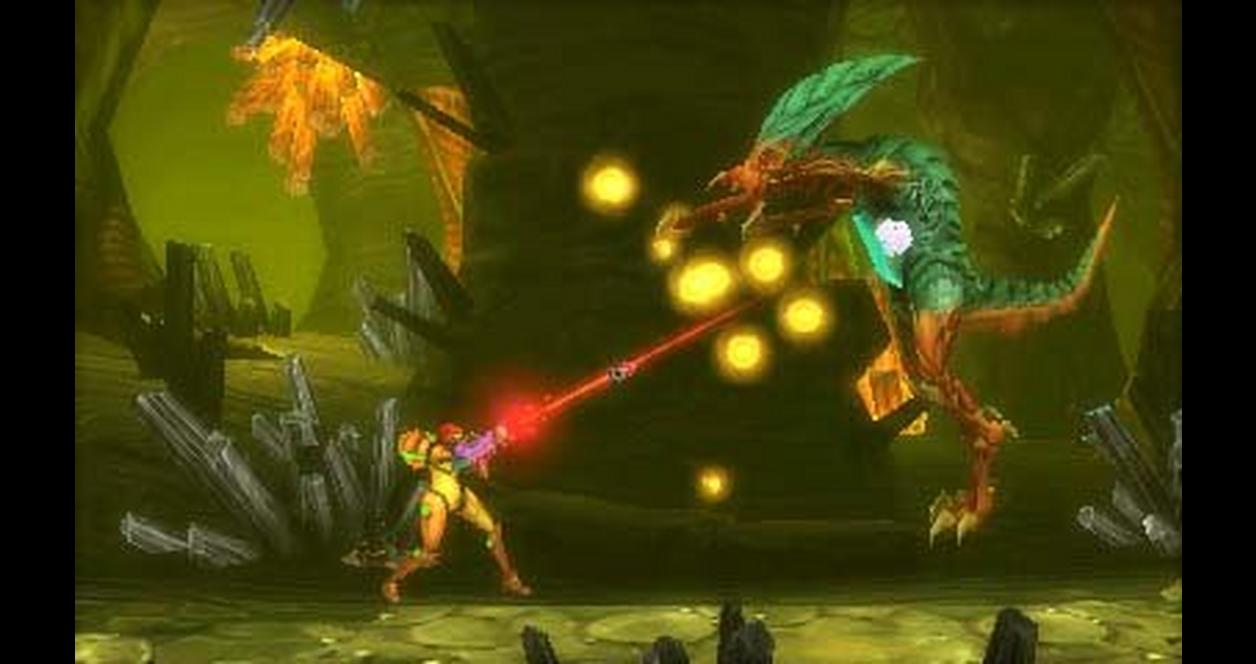 Fortunately the 3DS had a “normal” aspect ratio, so at least the screen proportions seem right.

Again though, controls are an issue. The 3DS has a lot more going for it than the GBA did in this department, but you’re still missing a second analog stick and a second pair of shoulder buttons. This game introduces full 360 degree aiming with the analog stick, but it’s only when you’re stationary since there’s no second stick to help with that.

Like Zero mission, it works, but it’s hard to not imagine how much better it could be with a simple port job.

So if they were to port this and other 3DS games to the Switch, the lack of HD would be solved, and you'd be able to play them on a big TV where all the incredible detail can be seen, and you could do so with standardized controls. No touch screen buttons to fiddle with while you’re trying to run around, just buttons that you can feel.

Touching is not so good

Similarly, we have Metroid Prime: Hunters. Not anybody’s favorite Metroid game in all likelihood, but still a pretty good time. This is also available on the WiiU Virtual console, but it again poses its own issues, particularly in terms of how it controls with the touch screen. When playing it and games like it on the DS or 3DS, it’s more or less fine, but there’s a reason first person shooters control the way they do on consoles, it’s just better that way, especially when it comes to the really modern stuff that incorporates subtle motion controls for precision aiming.

Then of course there’s the game's online mode, which would likely find a welcome home on a modern console. 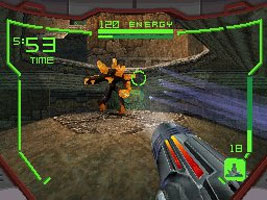 Again, we have a Metroid game that’s cool, but weirdly trapped behind unconventional controls.

Over on the GameCube, we have the masterpiece Metroid Prime. Now, it’s been LONG rumored that the Metroid Prime Trilogy is coming to Switch, but it wasn’t until I tried booting up my original copies that it became apparent just how badly this port needs to exist.

First, we have the original GameCube release. It still looks great, but those controls. They technically still function, but the way that game very specifically doesn’t use the right analog stick for movement is so difficult to get around. The GameCube controller is great for a lot of signs, but first person shooters isn’t one of them.

Over on the Wii, things aren’t too much better. The Metroid Prime Trilogy is readily available on WiiU, and while it isn’t true HD, it looks fantastic as it is. Well, almost.

In Prime Trilogy, since the first game was never originally designed for widescreen TVs, when they ported it they made it so the view in the game itself was expanded naturally, but instead of redrawing the HUD, they just stretched it. Circles are ovals, words look squished, and it’s just awful. Okay, maybe I’m overselling it, but it drives me nuts. 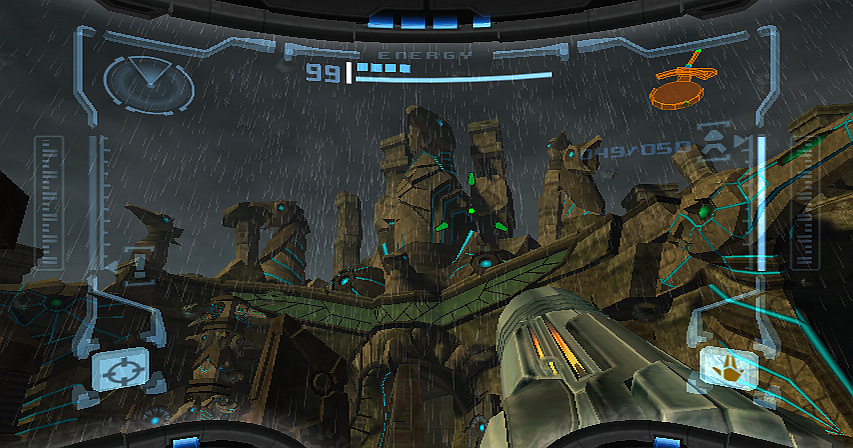 Then we have the controls. They’re great, really, but for my money I’d still prefer to just play the game with two analog sticks instead of a Wii remote and nunchuck. What they accomplished with that scheme is fantastic and was honestly some of the best FPS controls on any console at the time, but now that motion has been incorporated into traditional controllers, the Wii remote combo feels clunky.

Metroid Prime is one of the finest games ever made, and once again, there’s no way to play it properly with current video game standards. It’s only half in widescreen, and the controls are at best pretty okay.

While we’re talking about the Wii, let’s touch on Metroid: Other M. This game has problems that a simple port could never fix, but the biggest ones might be easier to swallow if we didn’t have to also deal with its completely absurd control limitations. 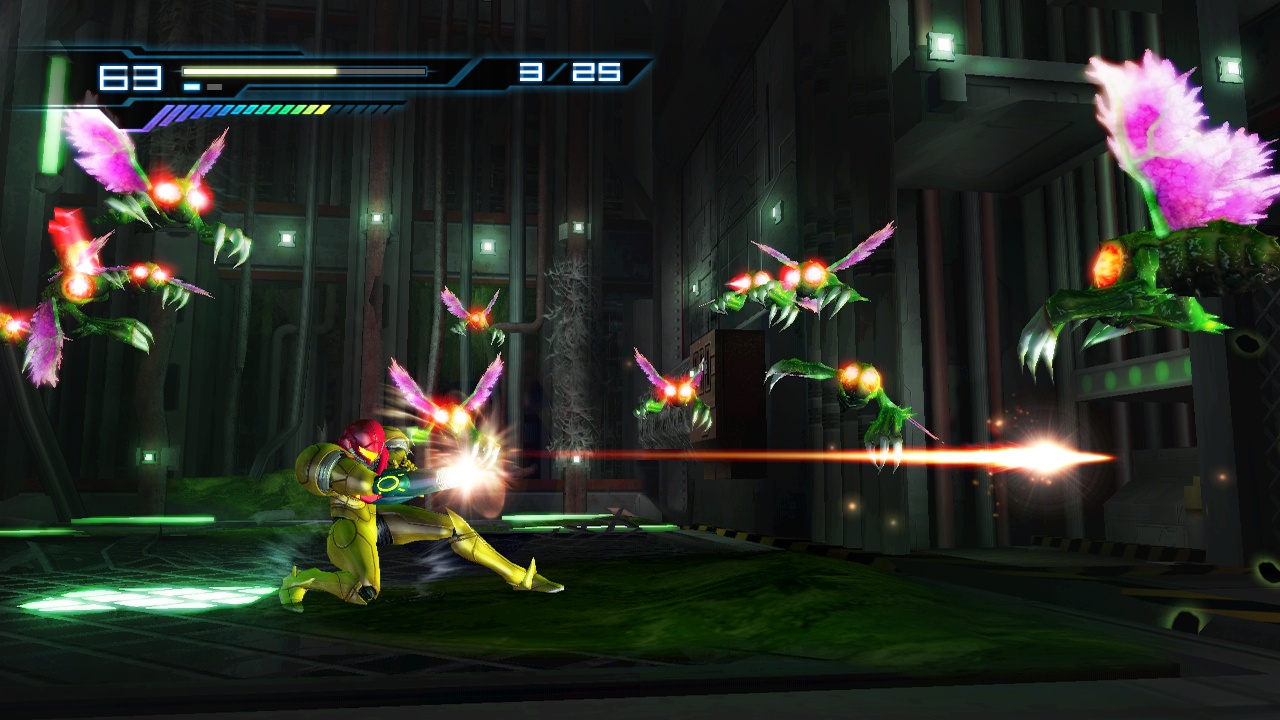 For reasons defying all sense of logic, Nintendo insisted that Other M control exclusively with the Wii remote held sideways. Other M is a 3D game, and moving a character around a 3D environment with a D pad is never a good idea. No, the cinematics wouldn’t be fixed and the gross character assassination on Samus wouldn’t be undone, but the actual gameplay, which was really quite fun, would be so very much better with the use of a standard modern controller.

There’s even a case to be made for the most hated of all Metroid games: Federation Force.

It’s actually not a bad game at all, just a completely tone deaf one. But in a world where we aren't starving for actual new Metroid content, on a system with at least a mostly functioning online infrastructure, Federation Force could actually shine. Blast Ball is no Rocket League, but it’s still a pretty good time.

The Importance of Ports

What Metroid illustrates so perfectly is that there are a ton of really great games that are trapped behind old technology. That games like Donkey Kong Country: Tropical Freeze, Pikmin 3, and Bayonetta 2 found considerably larger audiences on Switch is simply wonderful, and seeing games like Miitopia find their way to a platform where people actually play games is fantastic, but they only stand to prove that ports should absolutely keep coming. I love replaying my old games, that’s why I buy them, but as technology moves on it becomes more and more apparent to me that Nintendo’s old gimmicky systems, while brilliant at the time, make it hard to play some of their best games comfortably today. 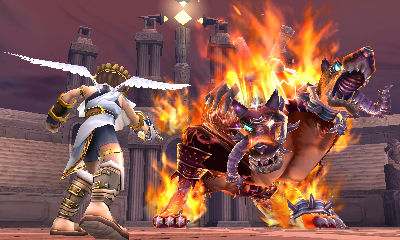 So no, Nintendo shouldn't slow down on the ports. Nobody should really, but Nintendo’s the biggest offender here by far. They just need to strike a better balance between ports and new content. In the meantime, I’ll continue to hope Samus Returns comes to Switch, because I don’t think I ever want to play on a standard definition screen again. Unless it’s on a big ol’ CRT.