How about that last Nintendo Direct, eh?

I’ve seen plenty of mixed reactions to it, and I get it. But for me, I loved it. And at the very top of that mountain of reasons I did was the Link’s Awakening remake. Never in a million years did I think Nintendo would issue a full-on remake for one of my favorite weirdo Zelda games that not nearly enough people have played, but here we are. The art direction isn’t exactly what I had in mind, but Link’s Awakening is being modernized, and I couldn’t be happier.

It got me thinking though, that Nintendo’s been doing this a lot lately. No, not remaking their classic titles. That’s pretty common practice for just about every game company out there. I mean specifically remaking black & white Game Boy games with modern flare. 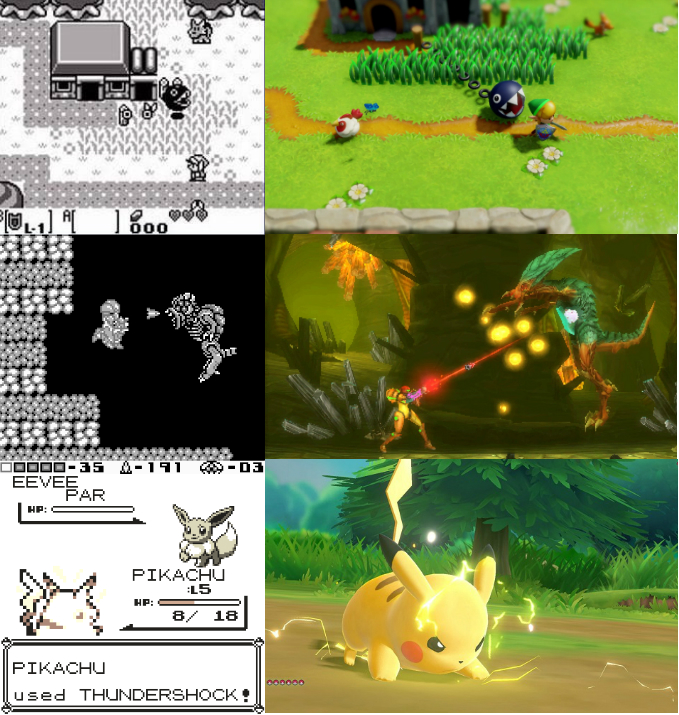 2017 brought us Metroid: Samus Returns for 3DS, a full modern remake of Metroid II: Return of Samus for Game Boy (which still needs to be HD remastered on Switch). 2018 brought us Pokemon: Let’s Go Pikachu/Eevee, a complete overhaul of Pokemon Yellow. Now 2019 is giving us Link’s Awakening. Metroid and Pokemon were both phenomenal in my opinion, and I have little doubt Link’s Awakening will follow suit, so I have to say I’m loving this trend. The Game Boy is a very interesting place in Nintendo history to pull remakes from because while a ton of its games are still very fun to play, there’s no denying they’re harder to enjoy today because of the technical limitations of the time, especially ones that just so happen to be a part of beloved Nintendo franchises today. So I thought it might be fun to imagine what other overlooked sequels Nintendo could potentially revive from the Game Boy era, and just how awesome they could be on modern hardware. (I know Pokemon Yellow isn’t exactly overlooked, but Metroid II and Link’s Awakening are!) 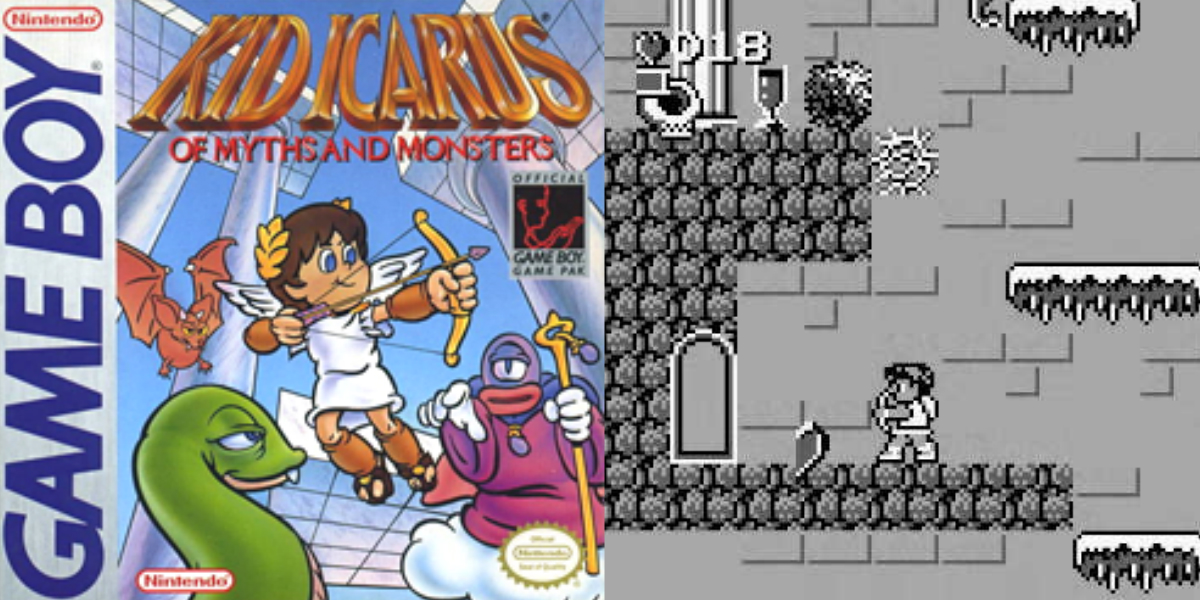 Kid Icarus: Of Myths and Monsters

Metroid and Kid Icarus have always been sister-series. Unfortunately for me and the other 5 Kid Icarus fans in the world, Pit hasn’t exactly seen the same level of reverence from Nintendo as Samus has since the old days. But back then, Kid Icarus was right on the same level as Metroid in the world of Nintendo. Pit was a regular character in the Captain N: The Game Master cartoon, he had a month dedicated to him in the Nintendo Power Game calendar, he played violin next to Donkey Kong in the NES version of Tetris, and most importantly, he got a Game Boy-only sequel in 1991.

Kid Icarus: Of Myths and Monsters did for the Kid Icarus franchise the same thing Metroid II: Return of Samus did for Metroid, it took what worked from the first game and improved in nearly every way. The controls were loosened up a bit. The screen scrolling allowed you to fall without dying. Pit’s wings can flutter, slowing his descent like Mario’s raccoon tail. Some of the enemy designs aren’t as creative as the first game, and while the music is still pretty great, it isn’t on the same level as Hip Tanaka’s NES original, but it's still a really good game. Now imagine taking the Samus Returns approach to modernizing it. They could keep the same basic design, but then take some Kid Icarus: Uprising inspirations and add a melee attack system to spice things up. Re-jigger the levels a bit to make them a little more dynamic. Maybe throw in some new weapons too. The Kid Icarus franchise could benefit greatly from not just a fresh take on its 2D formula, but also re-establishing Orcos as a non-Medusa threat to Angel Land. He’s a really cool villain design, and an update to his boss fight could be really cool. Throw in some trademark Kid Icarus banter throughout the adventure and you have yourself a winner. 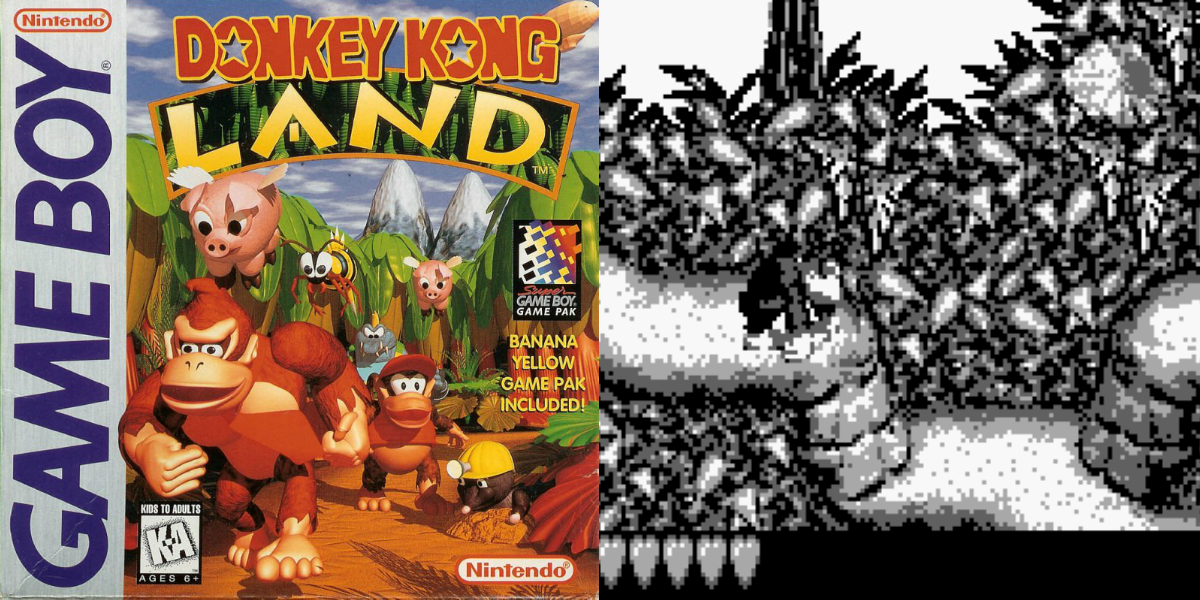 The basic premise of this one would have to be changed up, but this game is full of so many cool ideas that are just barely functional because of the Game Boy’s limitations it’s positively begging to be remade. For those unfamiliar, the story of the Game Boy original is hilariously meta. Basically, Cranky Kong is convinced the only reason Donkey Kong Country was a success was because of its graphics. So he has King K. Rool come back and re-steal DK’s banana hoard so Donkey and Diddy can embark on a platforming adventure of monochromatic 8-bit proportions, so they can settle once and for all whether their success is based on more than looks. Turns out Cranky was at least partially right. Donkey Kong Land is perfectly playable once you get the hang of it, but it’s at best a shadow of its full potential thanks to the limitations of the Game Boy.

Honestly, this game doesn’t really need a whole lot of work done to it outside of the visuals and physics. Its core design is completely sound. The Game Boy’s crowded play area would no longer be a problem for those platforms you can’t see beyond the edge of the screen, and the weird jumping physics could easily be replaced with the existing engine used for Tropical Freeze. And speaking of Tropical Freeze, a similar buddy system would be a really nice wrinkle to add. Between the wacky cloud areas, the city levels, and K. Rool’s ship, modern graphics would make this game really shine, and I’m sure they could get David Wise to come back and update his original compositions for the game too. Donkey Kong Land 2 and 3 were more or less just Game Boy retreads of DKC 2 and 3 for SNES, so they can more or less be ignored in favor of their 16-bit big brothers, but the original DK Land was completely original, and it deserves to be brought into the modern era. 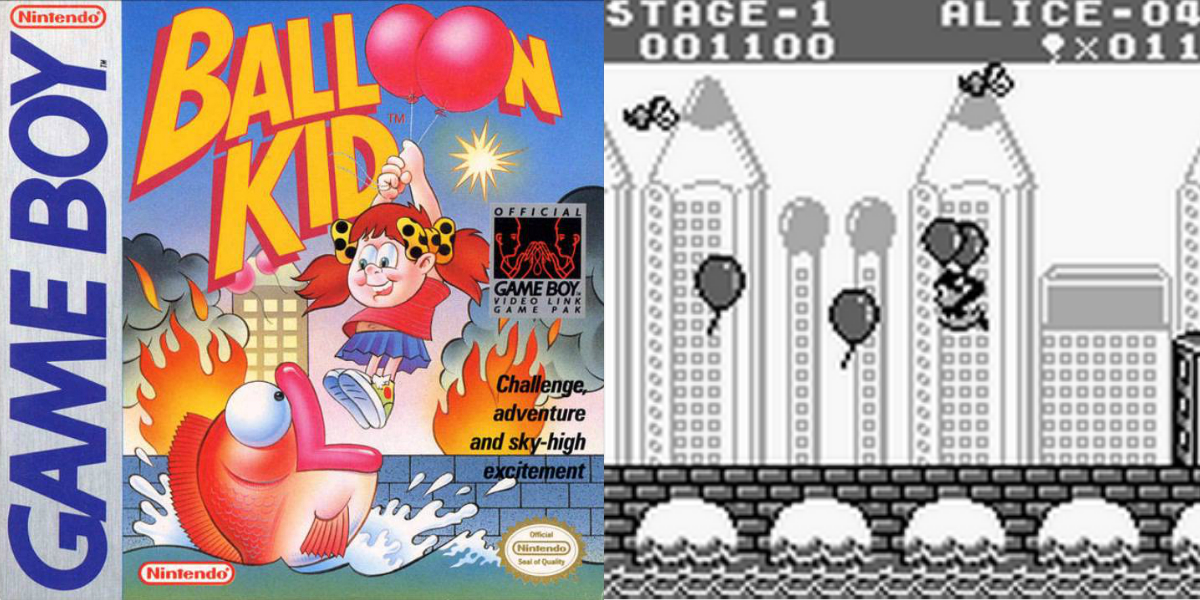 Everyone remembers Balloon fight for NES, but not enough people remember its Game Boy sequel Balloon Kid. This one’s seen some weird reinventions already, from a Japan-exclusive GBC colorization in the same vein as Link’s Awakening DX to a Super Mario Bros. 2-style reskinning as a Hello Kitty game on NES, but no matter how you slice it, this game is just plain fun, and perfectly positioned for the remake treatment. Taking Balloon Fight’s mechanics and letting them loose in a side-scrolling adventure game was a stroke of genius, and I really couldn’t tell you why Balloon Kid never took off. It’s a blast to play, it’s got nice-looking graphics considering it’s a Game Boy title, the music is more catchy Hip Tanaka goodness, and it’s a sequel to an established, popular NES game.

Well, Balloon Kid’s spent enough time in the dark. All Nintendo needs to do is give the game a fancy new art style, I’m thinking something akin to the recent Wonder Boy: The Dragon’s Trap remake, throw a Balloon Fight mode in, maybe some online multiplayer, a couple of new levels for kicks, and they can call it a day. Should it be full $60 release? Heck no. But as a $20-30 download game, this would positively rule. 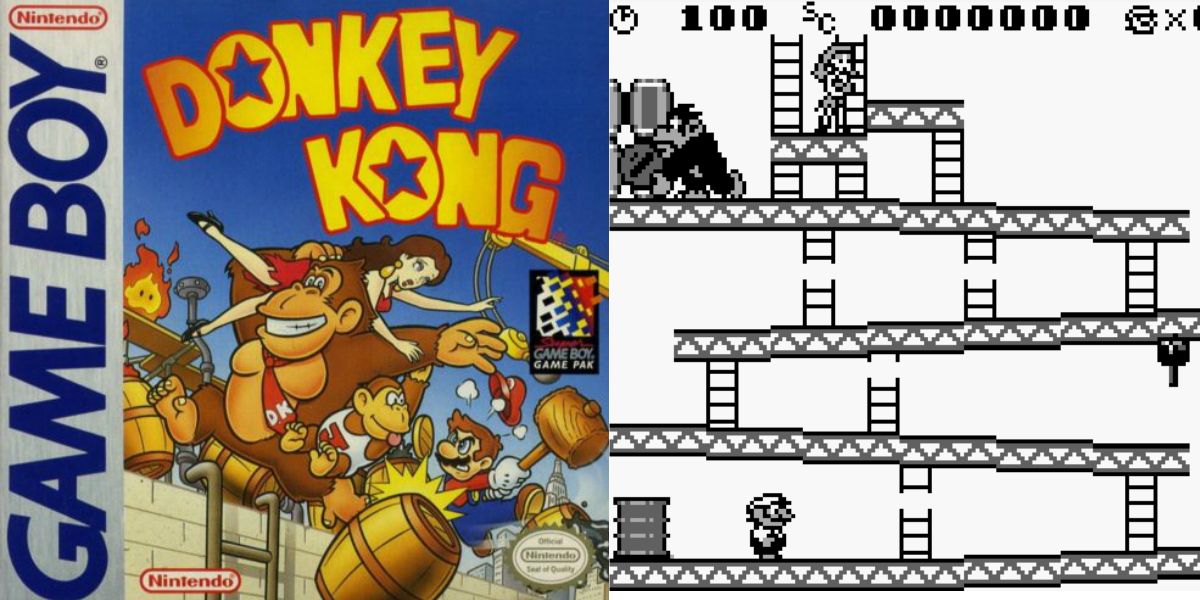 Oh, this game. Sure, it spawned the very successful Mario vs. Donkey Kong series that resulted in approximately 856 sequels featuring strange little robot versions of Mario characters called “minis,” but none of them, not a single one, holds a candle to the Game Boy classic simply called Donkey Kong. What starts out as a modern update of the 1981 arcade original quickly becomes a sprawling puzzle platformer that’s brimming with creativity. Not only does it offer a new concept built around the DK formula, but it also successfully incorporates elements from the original arcade Donkey Kong and Donkey Kong Jr. games, and has one of the most memorable final boss battles on the platform.

This game honestly doesn’t need much to make it modern other than graphics and music. It already plays near flawlessly, and it isn’t lacking on content. If anything, they could mash this game and the GBA’s Mario vs. Donkey Kong together for a gigantic onslaught of levels to attack, but they seriously don’t need to try that hard. This game is easily one of the best games the original Game Boy has to offer, and it holds up perfectly today. Slap a fresh coat of paint on it and I’ll be there cash in hand. 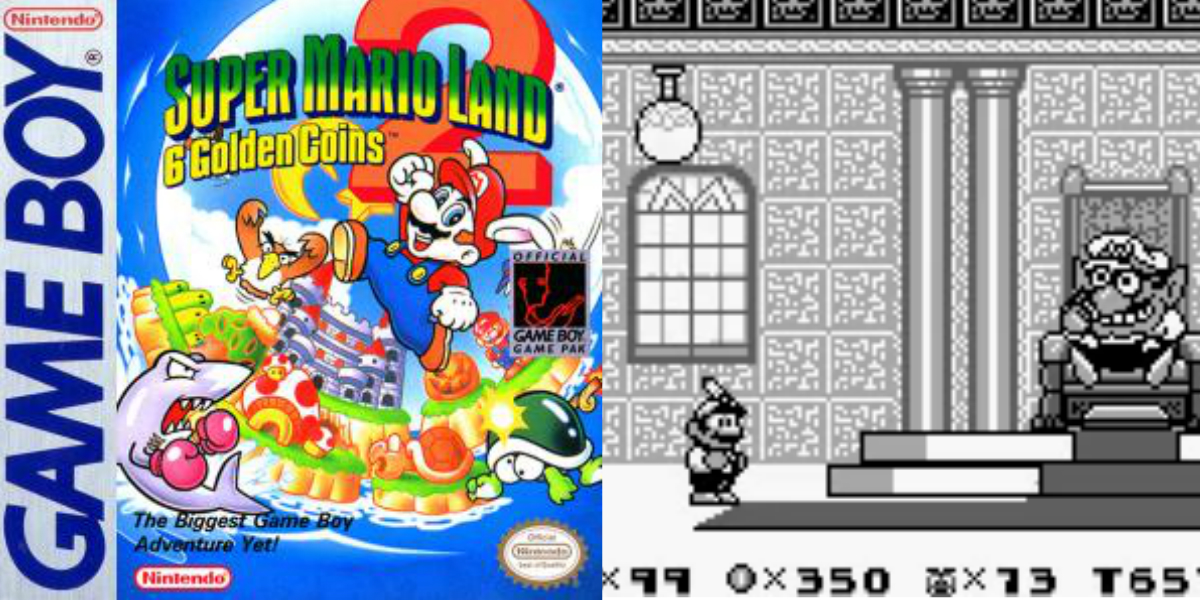 Above every other game on this list, this is the one that simply has to be next for Nintendo. Remaking the NES Mario games at this point is kind of a weird proposition because they’ve all been so readily available for so long. Even the SNES had Super Mario All-Stars. But Mario’s Game Boy adventures rest in somewhat obscurity, and considering they’re some of his weirdest and most creative adventures, that’s a real shame. It’s true that the original Super Mario Land needs the remake treatment way more than this one, and a proper modern remake would be incredibly cool, but it would definitely require a much more thorough overhaul. Super Mario Land 2 is already pretty great as-is, and is only really missing a modern coat of paint, proper Mario physics, and a larger screen to work with.

But man, if they wanted to really get crazy with it, Super Mario Land 2 could be really special. The game’s existing zones are super wild, and reimagining them with some sort of modern art style would be so much fun to see. As far as Mario adventures go, it’s a little light on content by modern standards, so some new levels would absolutely be warranted, but that shouldn’t be too hard for the minds at Nintendo to crank out.

But what else would really make this game stand out is Wario. This is the first game Wario ever appeared in, and it’s pretty much the only time he’s been the main antagonist in a Mario game. Can you imagine if they made a whole second part of the game where you play through as Wario trying to stop Mario from getting his castle back? (Why does Mario have a castle again?) There could be ties to Sarasaland and Princess Daisy. They could explain why Tatanga is still around except as a regular level boss this time. They could add multiple playable characters. They could have SO MUCH FUN WITH IT. Super Mario Land 2 is simply begging to be remade, and I can not wait for Nintendo to come to that realization.

These are just my top 5 picks, but honestly the Game Boy’s library is just lousy with games ripe for remaking. Mole Mania, Wizards & Warriors X, Gargoyle’s Quest, Wario Blast, Castlevania II: Belmont’s Revenge, all 5 Mega Man games, Kirby’s Dream Land 2, Ninja Gaiden Shadow, the list goes on and on. But what do you think? Should Nintendo keep diving into the Game Boy well for inspiration, or should the only concentrate on making new titles? I, for one, think they should keep digging. There's plenty of gold left to discover.