Battle of the Spinoffs

Kirby and Pac-Man have a surprising amount in common. They’re both video game characters, they’re both round, and they’ve both had careers filled with spinoffs.

Many of these games are unique to their respective brands. Kirby’s Dream Course is a brilliant take on golf, but as far as I know Pac-Man hasn’t hit the links in any major capacity. Pac-Man Fever is a funky take on the Mario Party formula, but Kirby hasn’t spent any time on a virtual board game competing in minigames.

However, there are many more instances where Pac-Man and Kirby have starred in spin off games that share some pretty significant similarities.

Today we’re going to compare some of these similar games to see which colorful mascot character does spinoffs better.

Note: We’re going to avoid platformers since that’s where Kirby games spin off from. Also, Pac-Man’s platforming adventures are mostly 3D ones, which Kirby has suspiciously never been involved in. Just trying to keep the playing field level.

Puzzle games were a staple on the Game Boy, and while there were 16-bit versions of both of these games, Kirby Super Star Stacker was only released in Japan, so we’re going to compare the Game Boy versions. 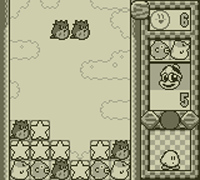 Kirby Star Stacker is kind of a weird puzzle game to wrap your head around, or at least that’s how it felt when I played it. I love well-based puzzle games and I love Kirby, so I was excited to give this one a try. Ultimately, it’s not bad, but it’s pretty forgettable. Unlike Kirby’s Avalanche which is just a version of Puyo Puyo with a Kirby coat of paint, Star Stacker is an original puzzle game, so it gets points for that. Still, the actual Kirby aspect of the game is more or less just cosmetic. Not a bad game, but not the best puzzle game either.

Pac-Attack is also an original puzzle game, but it is a lot more memorable than Star Stacker. The visuals have a silly 90s graffiti look to them in some vain attempt to be cool, but what makes it special is how it actually incorporates Pac-Man’s mechanics. 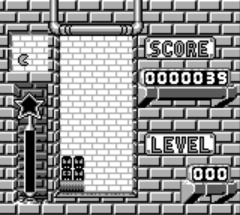 Blocks fall down into the well, and sometimes those blocks are attached to ghosts. Eventually a Pac-Man will fall into the well and turn whatever ghosts you have in the playfield blue, and if you land the Pac-Man near them, he’ll gobble them up. It’s actually really fun.

This round goes to Pac-Man, no contest. Neither game is bad, but Pac-Attack is way more memorable, and incorporates Pac-Man in a more meaningful way.

With both characters being basically balls with limbs, I suppose it was only a matter of time before they each got games made about them rolling around. The control method is different, but the basic premise is the same. 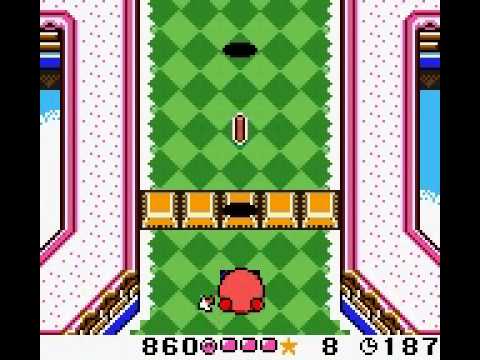 Kirby Tilt n Tumble came in a special Game Boy Color cartridge with gyro controls built in. It’s a really innovative little game that works remarkably well. True, the Game Boy Color screen isn’t the best in the world and having to tilt the console to play can make seeing what you’re doing a little tricky sometimes, but like most Kirby games, it’s charming, creative, and genuinely fun. 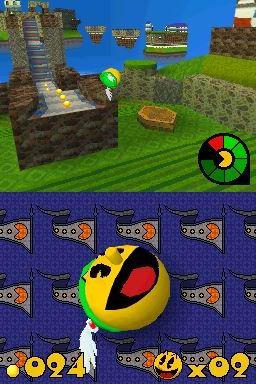 On the other hand, Pac n Roll comes from that wonderful time when the Nintendo DS was a playground for companies taking chances on unique ideas. Like Kirby Tilt n Tumble, Pac n Roll has you roll Pac-Man around a series of maze-like environments, except instead of gyro controls, you move Pac-Man around by using the stylus on the bottom screen like a track ball. It’s a little weird seeing a giant rolling Pac-Man at all times on the bottom screen, but the game is genuinely a blast to play.

This one was close, but Pac n Roll has the benefit of youth on its side, and therefore is a bit more fleshed out and polished. They’re both great, but I give the slight edge to Pac n Roll.

While we’re on the topic of the Nintendo DS, these two games are absolutely brilliant. Kirby: Canvas Curse was the first game on the DS that really showed what touch screen gaming could be. Up to this point, most of the best DS games were brilliant-yet-limited experiences, centered around a single gimmick. 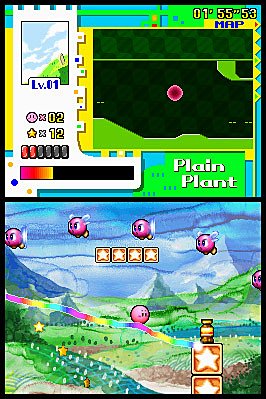 Canvas Curse showed that in the right hands, the Nintendo DS could truly replace the Game Boy brand with full, creative experiences. This game absolutely rules, and there was very little like it at the time.

You control Kirby indirectly by drawing paths on the screen for him to roll on. It can be a little tough sometimes, but once you get the hang of it, it’s a platformer that plays like no other. 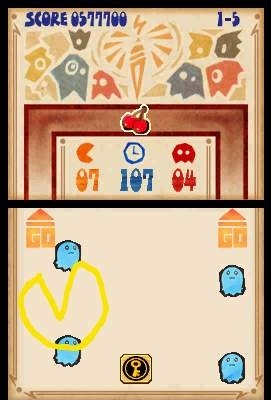 Meanwhile, we have Pac-Pix, another game based around drawing on the screen. This one falls in the brilliant-yet-limited category. In Pac-Pix, it’s your job to draw various Pac-Mans (Pac-Men?) of different sizes. Small ones move quickly, big ones move slowly. You have to draw your Pac-Man large enough to fit his mouth around the ghost on the screen, then steer him around by drawing various lines in his way. It’s ridiculously fun and very clever. It also has a killer soundtrack.

This one breaks my heart to say because I’ve been singing the praises of Pac-Pix since it came out and nobody else seems to want to give it the time of day, but Canvas Curse is just that good. Give Pac-Pix a try though. It’s great.

Pinball spinoffs rule. Metroid Prime Pinball is fantastic. Sonic Pinball Party is a blast. So how do Kirby and Pac-Man fare? 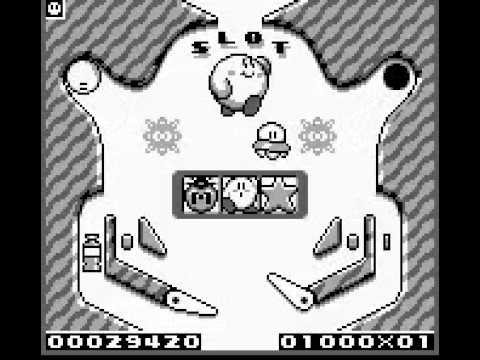 Kirby’s Pinball Land is wonderful. HAL cut its teeth on pinball games with the excellent Revenge of the Gator, but I think they perfected their skill with Kirby’s Pinball Land. Not only are the tables really fun to play on, but they did a great job of incorporating Kirby’s mechanics into it as well. It’s also worth mentioning that the box kind of looks like a pinball machine. Wonderful game. 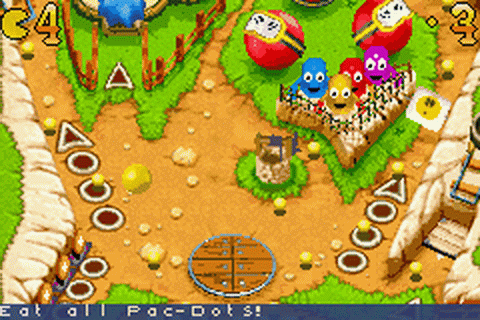 Pac-Man Pinball Advance is a game I’m honestly surprised didn't exist earlier than 2005, but as far as I can tell there weren’t any Pac-Man themed pinball video games before this, which is weird. Well, I guess there’s Baby Pac-Man, but that’s kind of a different animal entirely. Anyway, Pac-Man Pinball Advance is… fine. It’s pinball. It’s just not exactly special.

Not even close. Kirby’s Pinball Land is great, memorable, and Pac-Man Pinball isn’t.

Race to the Finish 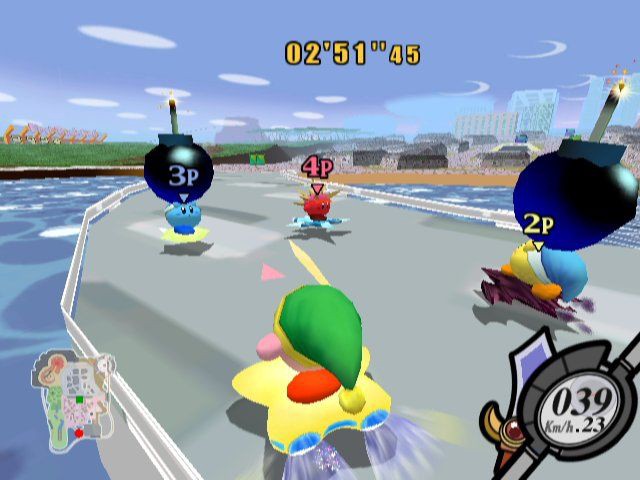 Ever since Mario Kart set the world on fire, every property under the sun has been trying to replicate its success. Unlike most, Kirby went in a different direction when it came to racing. There were no go karts, no zany cast of characters, just Kirbys on stars. Yes, it’s a bit basic, and one could argue it’s a little too simple, but it’s fun. It’s really fun. 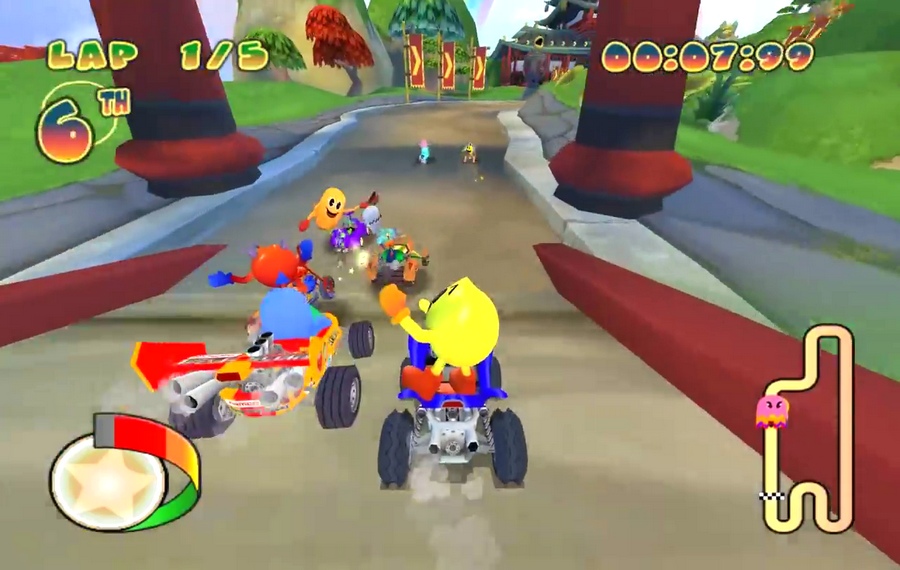 Another one that wasn’t even close. World Rally doesn’t really do anything wrong, but Air Ride does a bunch of stuff right. Creativity wins the day!

And so, we come to the last category: adventure games where you don’t directly control your character. 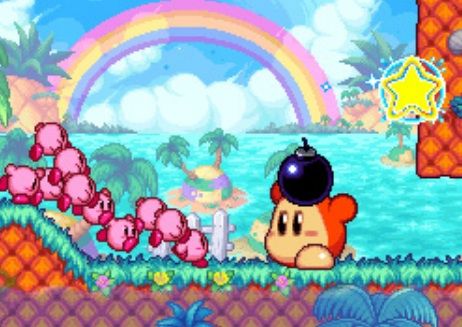 Kirby Mass Attack for Nintendo DS is a really interesting game. You “control” a rather sizable group of kirbys and direct them to do all sorts of things. It’s like a weird cross between a Kirby game, Pikmin, and Lemmings. I haven’t played a ton of it, but what I did play I really enjoyed.

Meanwhile, Pac-Man 2: The New Adventures is a travesty. I just played this game from beginning to end for the Podcast and I am amazed that it exists. It plays out like a point and click adventure, except instead of you giving your character directions to follow, Pac-Man takes your inputs as suggestions on where to go and what to do, and it’s up to you to convince him to follow through with said suggestions. 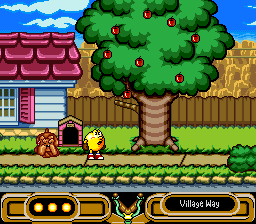 It doesn’t work for a couple of reasons. First and foremost, the AI isn't exactly advanced enough to handle the kind of game this wants to be. Second, Pac-Man is a complete moron in this game, often ignoring obvious answers to super easy problems.

The premise of the game is an interesting one, but the execution is awful. Just awful. I hate it.

So that makes the final score 4-2, meaning Kirby is the winner!

The competition was fierce, and more people should play Pac-Pix, but it’s clear tha Kirby has more quality titles under his belt than Pac-Man. Sure, his career has been much longer, and he's probably a more important figure in the history of gaming, but in the world of spinoffs, Pac-Man just couldn’t keep up.

What do you think?