Chiptunes on a cart

As a huge fan of video game music, I’ve been more than a little intrigued by Remute ever since his stuff showed up at Stone Age Gamer. We got his album “Technoptimistic” a while back and I was genuinely fascinated by the whole concept. Here was a brand new chiptune album that wasn’t a collection of MP3s, but instead was a functioning Sega Genesis cartridge that used the Genesis hardware itself to play the music. That’s pretty wild.

I’m not the biggest fan of the Sega Genesis’s sound output though, at least not in most cases. I’ve recently been learning to appreciate it much more on its own terms, but while Technoptimistic did sound like a really cool experiment, I couldn’t bring myself to actually pull the trigger and purchase it myself. In hindsight, I can honestly say that I was a fool. 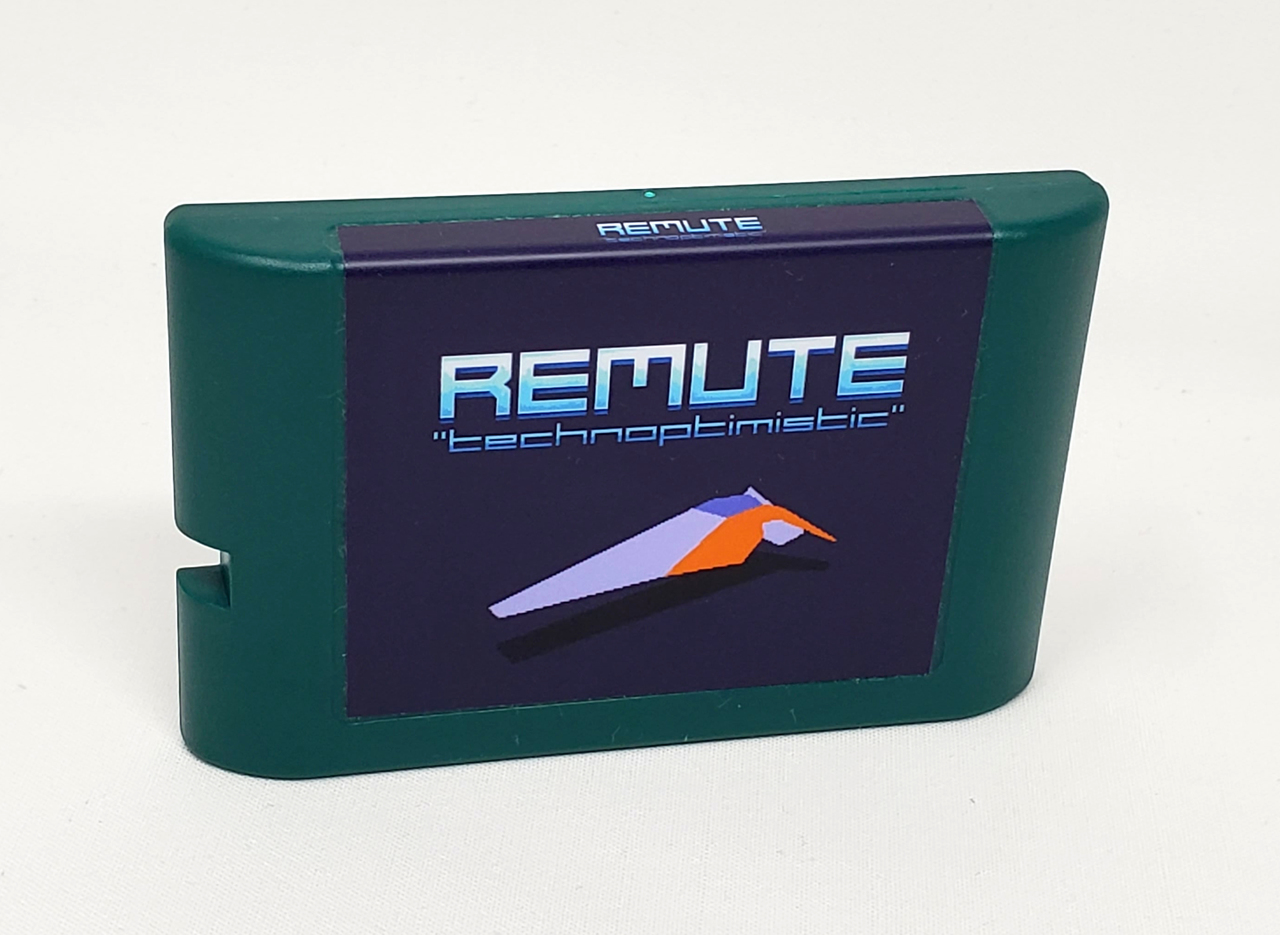 Fast forward to last week, when we got his new album “The Cult of Remute” in stock. This time, it was on a Super NES instead of a Genesis. This could go a couple of ways. SNES sound has the potential to be utterly amazing. See Chrono Trigger, Link to the Past, UN Squadron, etc. It can also be really muted and cruddy. See a large portion of the SNES’s licensed games. I feel like I don’t hear folks making original SNES style chiptunes as much as say Game Boy or NES, so this I had to hear.

Knowing how much I love video game music, the fine folks in charge of Stone Age Gamer asked me if I’d like to do a write up on the new Remute album, and I took them up on it. They sent me both Technoptimistic and The Cult of Remute in the mail, and I’m going to talk about my experience with them.

The first thing that comes to mind when I talk about these carts is surprise. Everything I had seen online about these things was just pictures of the cartridges themselves, and I couldn’t wait to see what kind of boxes they came in. When my package arrived, I was genuinely shocked to find that they both just came in clear plastic bags. That's it. No liner notes, no box art, nothing. 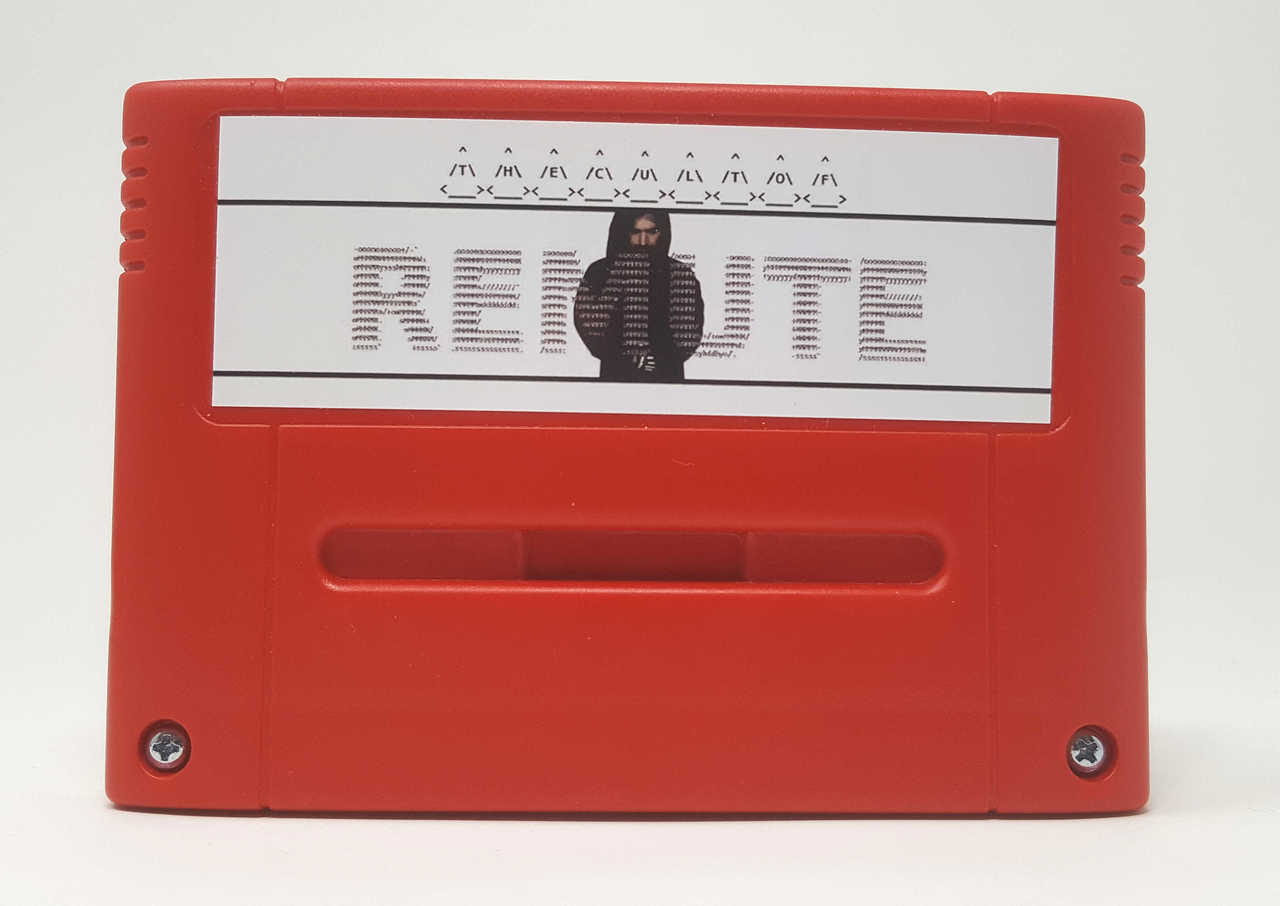 This struck me as particularly odd because this product seems very much made specifically for the collector’s market. Not just one collector’s market either. This stuff holds a heck of a lot of appeal for music collectors and video game collectors alike. Having a cool box and/or liner notes to physically hold and look at while the music is playing would really complete the experience for me. Not the end of the world or anything, just something that struck me as a bit odd. But as far as I know, official packaging simply doesn’t exist for them.

Once I had the carts in my hands, I decided to start with Cult of Remute since I’m more of a Super NES fan than a Genesis fan. The presentation is a bit more sparse than I expected, but it’s still pretty darn cool. When you first turn it on, you get a basic instructions screen telling you how to operate the album. Again, I was sort of expecting a bit more flash here. Maybe something that showed off the album’s cover art or something, but what’s here certainly gets the job done. 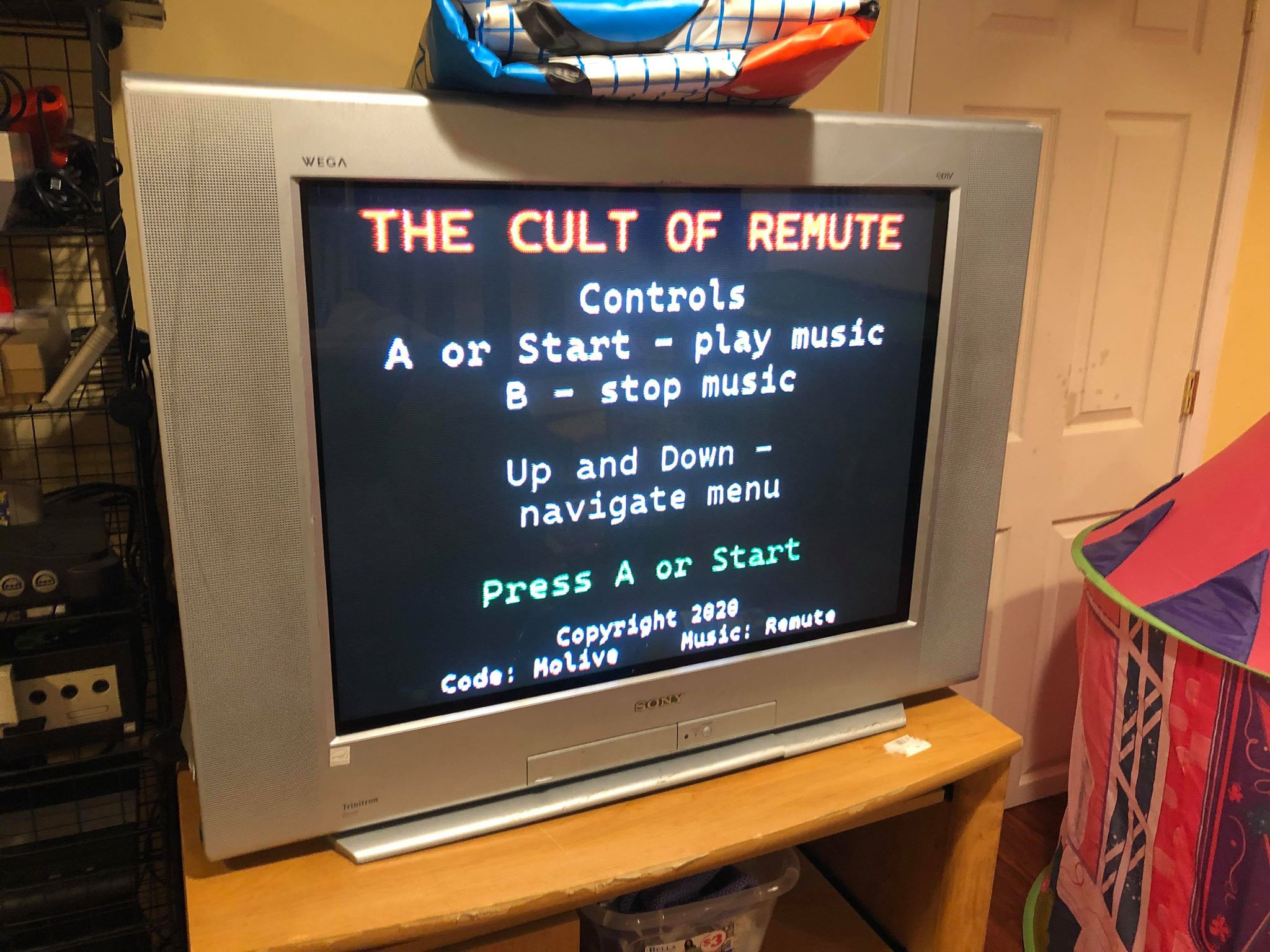 Once you get past the instructions, you’re presented with the actual album itself. It has a sort of ancient pyramid sort of look around the middle of the screen where the track names are, and as you scroll through them it has a sort of Mode 7 effect, like you’re spinning a cylinder around. The top and bottom of the screen show the album title written as it appears on the cart’s artwork, so that’s pretty cool.

I’m not sure what I was expecting out of the music itself, but I found myself rather surprised by what I heard. It’s got a lot of cool voice samples, and while the instruments are definitely high quality SNES stuff, it doesn’t sound structurally like video game music. It’s not built to loop infinitely or sound like background music for a particular kind of stage. It’s just music, and pretty neat music at that. 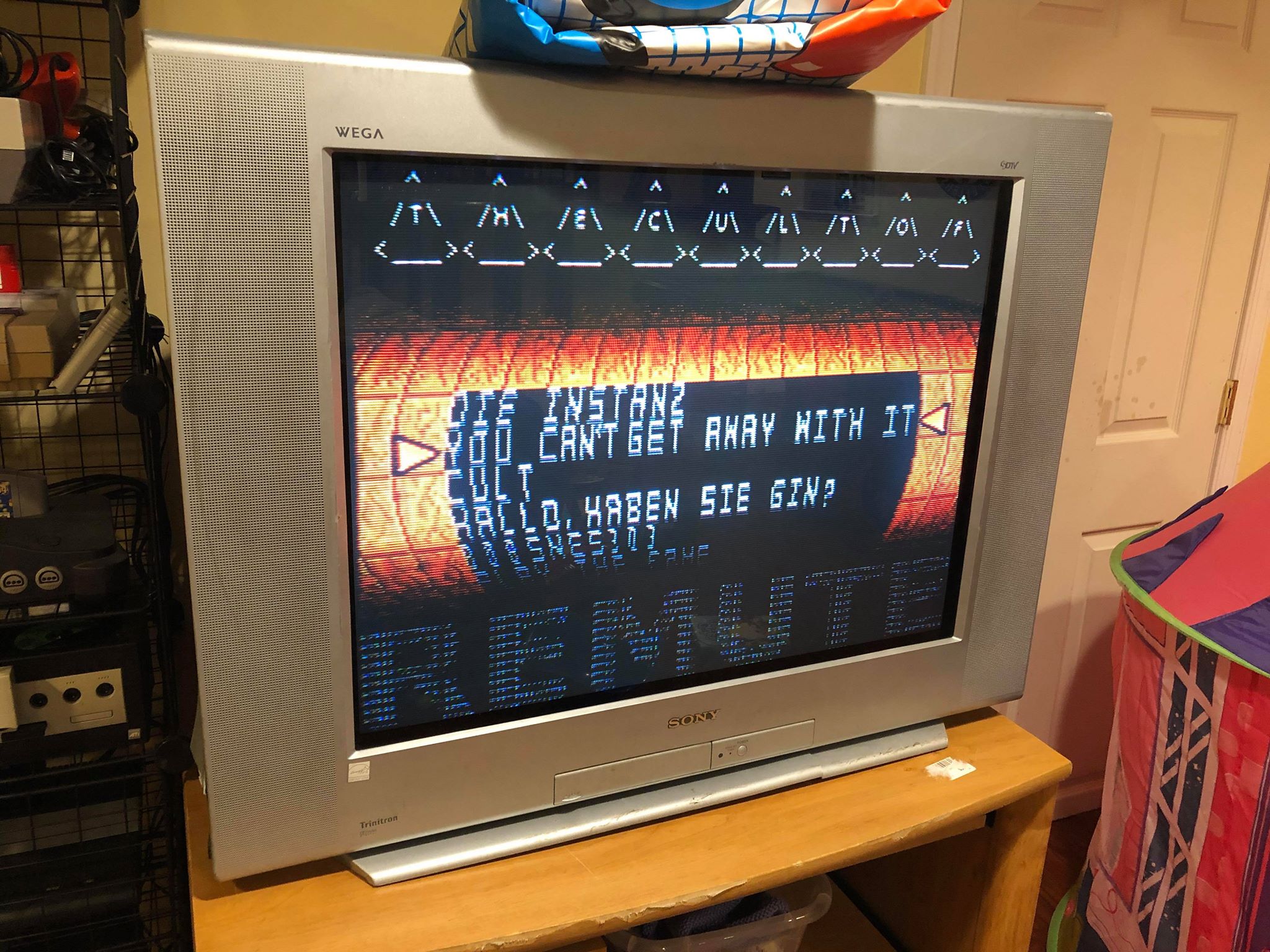 There weren’t any tracks that jumped out at me while I was listening that made me say “ooh, what’s this track called?” and jot it down. Instead, it all blended into the background and made for a great atmosphere. Since there isn’t any sort of visualizer on the screen, I found myself quickly just walking away and doing other things, which I guess is sort of the point, right? It isn’t a game, it’s an album.

Anyway, if you scroll through to the bottom, you can find listings for 2 bonus tracks. When you click on them, the screen displays a QR code that you can scan to give the tracks a listen, and they’re pretty wild. The first one is super energetic and really fun. The second one is a bit more atmospheric, but still a lot of fun to listen to. I assume these two are bonus tracks because they don’t sound like they’re coming out of a Super NES. Stylistically, they fit in with the rest of the record, but sound quality-wise, they sound a bit more high def than the rest.

Once I finished giving Cult of Remute a listen, I switched over to Technoptimistic. Packaging-wise, I like this one a lot better. Cult of Remute came in a red Super Famicom style cart with a couple of white stickers on it. It’s nice enough but it had a much more “homemade” feel to it. Technoptimistic just plain looks cool. The dark green cart works great with the label and artwork. IT has a much cooler feel to it that Cult of Remute did. That carries on through in the overall presentation, too. 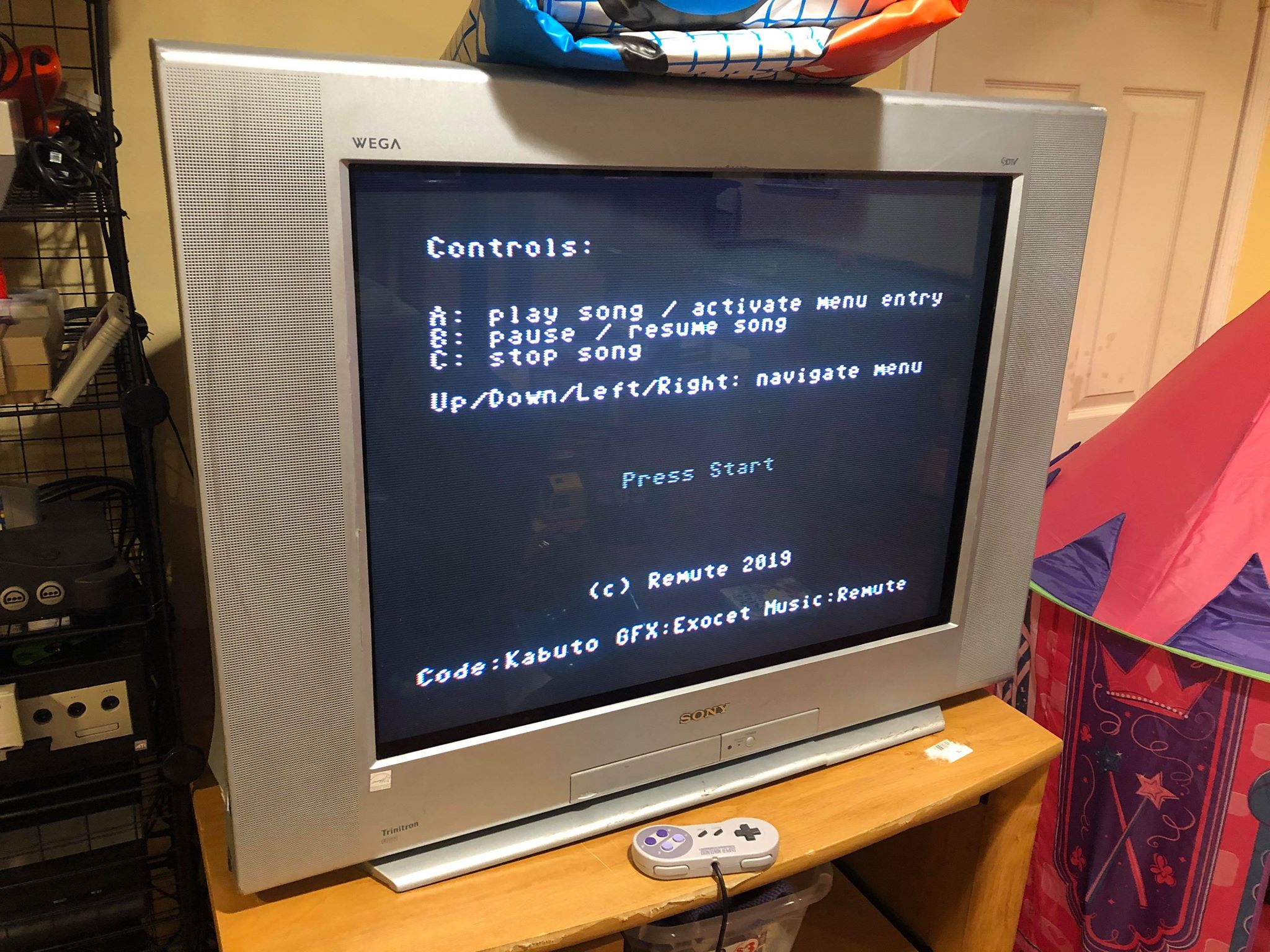 Where Cult of Remute felt neat but a little bare bones, Technoptimistic is a bit more full. The startup screen is a little more basic-looking than in the SNES album, but it honestly looks better this way. It’s cleaner, and it doesn’t come so close to the edges of the screen. It’s kind of a small thing to nag about, but I did notice it, and appreciate it.

Unlike Cult of Remute, this one actually starts playing music the instant you get to the track listing. I actually prefer being able to look through the tracks before sound starts playing, but again, that’s a really minor thing. 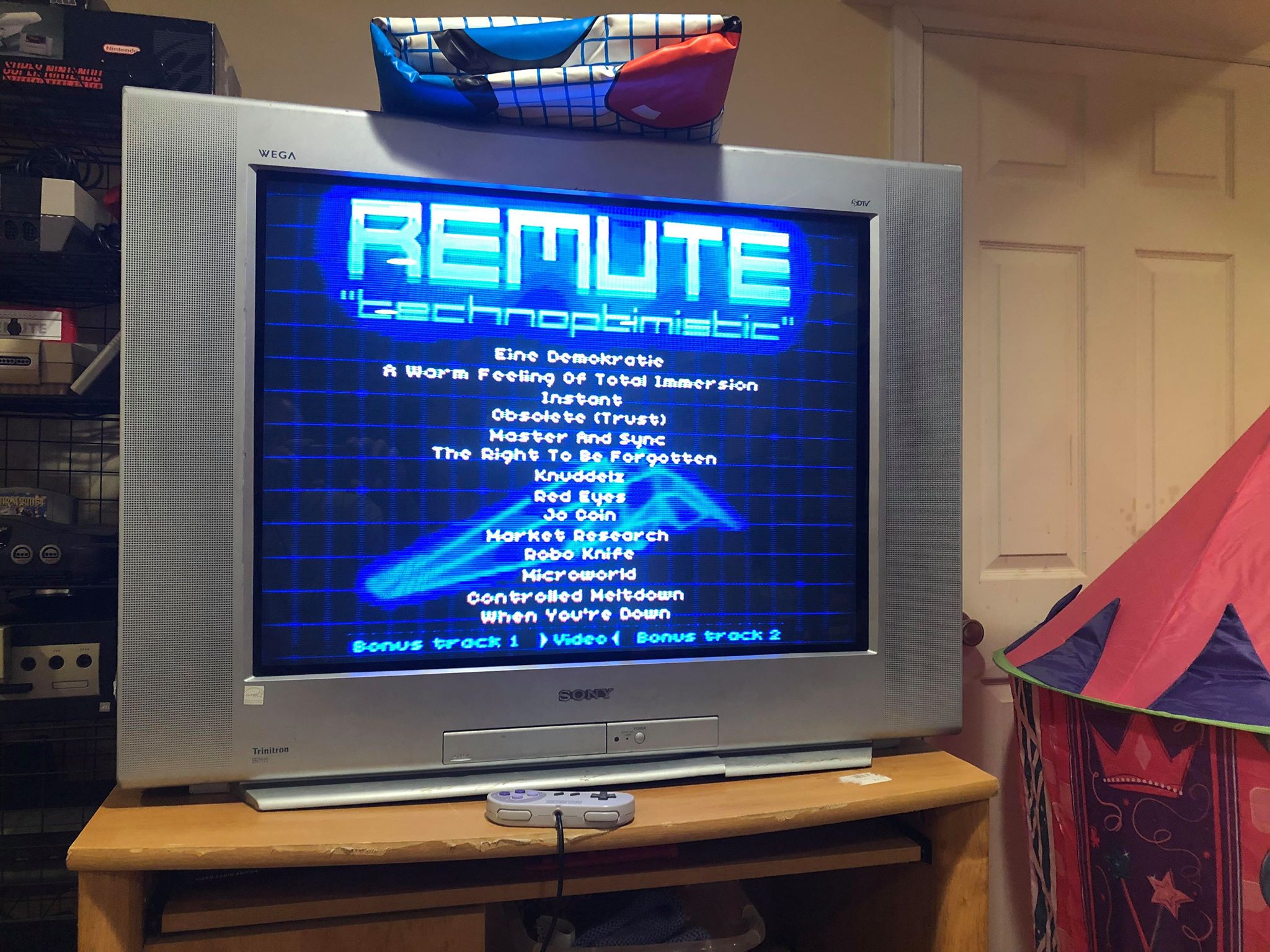 The art direction on this one is super cool. Cult of Remute had that cool rolling list of tracks, but even though Technoptimistic is just a static screen, it’s so much cooler looking. The lack of any sort of movement while the music is on is still a bummer, especially since if you were to just leave this running for the entirety of the album, you’re leaving a static image on your screen for quite a while, and some old TVS really don’t like that. Still, it has a really awesome look to it.

What really sets this one over the top is the music video that's included. It’s for the song Red Eyes, and it’s just awesome. It features actual video of a guy working at a desk, inserting a floppy disc backwards, and being teleported to this cool sci-fi polygon world, and it’s kind of nuts seeing it running on a Genesis. It’s some cool wizardry, and I loved it. 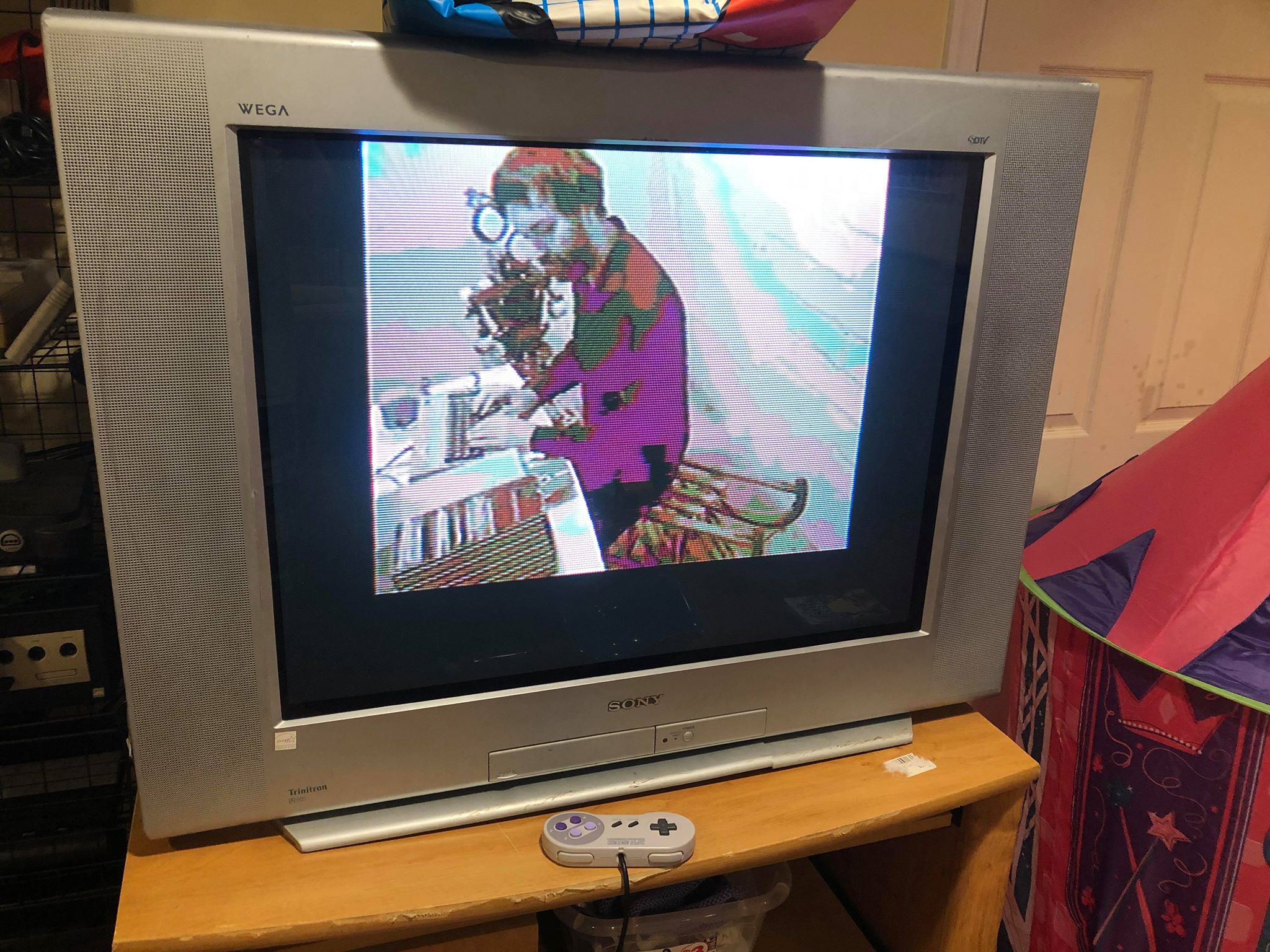 The music itself is pretty much in line with what I heard on Cult of Remute, except with a much more Genesis flair, obviously. A lot of the instruments reminded me of Ecco the Dolphin (in a good way) and I found it to be really fun to listen to. Again, less melody driven than the kind of stuff I typically listen to, but it’s really great to have on in the background while working on a project or something.

These both work really well as full album listens. Again, I didn’t have any specific tracks jump out at me so much as I really loved the overall feeling that came from listening straight through. I also didn’t dislike any specific tracks. It all just works, and while that may not sound like a huge compliment, I promise you that it is. Making a full album that’s a solid listen straight through to the end with no songs making me want to skip them isn’t a super common thing, and I was definitely impressed by both carts.

So if you’re a fan of video game music, unique game collecting, or unique music collecting, I definitely recommend these carts. What they lack in flash, they make up for in substance.

If you'd like to try them for yourself, here's where you can get yours.