I honestly didn’t think I’d be revisiting “Feeling Board” for quite some time, but I just so happened to pick up a couple of new board games at TooManyGames, so here I am! Let’s talk Turbo.

I was completely unfamiliar with Sega’s arcade game Turbo when I bought this thing. The only thing I actually knew about it is that it came bundled in with the ColecoVision Expansion Module 2 racing wheel. I’ve never played it, nor have I ever even seen the game in action. So unlike all the other board games I’ve played before, I was going into this one completely blind. What could possibly go wrong?

Surprisingly, not much! In fact, this game is a blast! I played it with my son (who LOVES cars and trucks) and even though it was just the two of us, the game was easy to learn, and wound up being really fun. 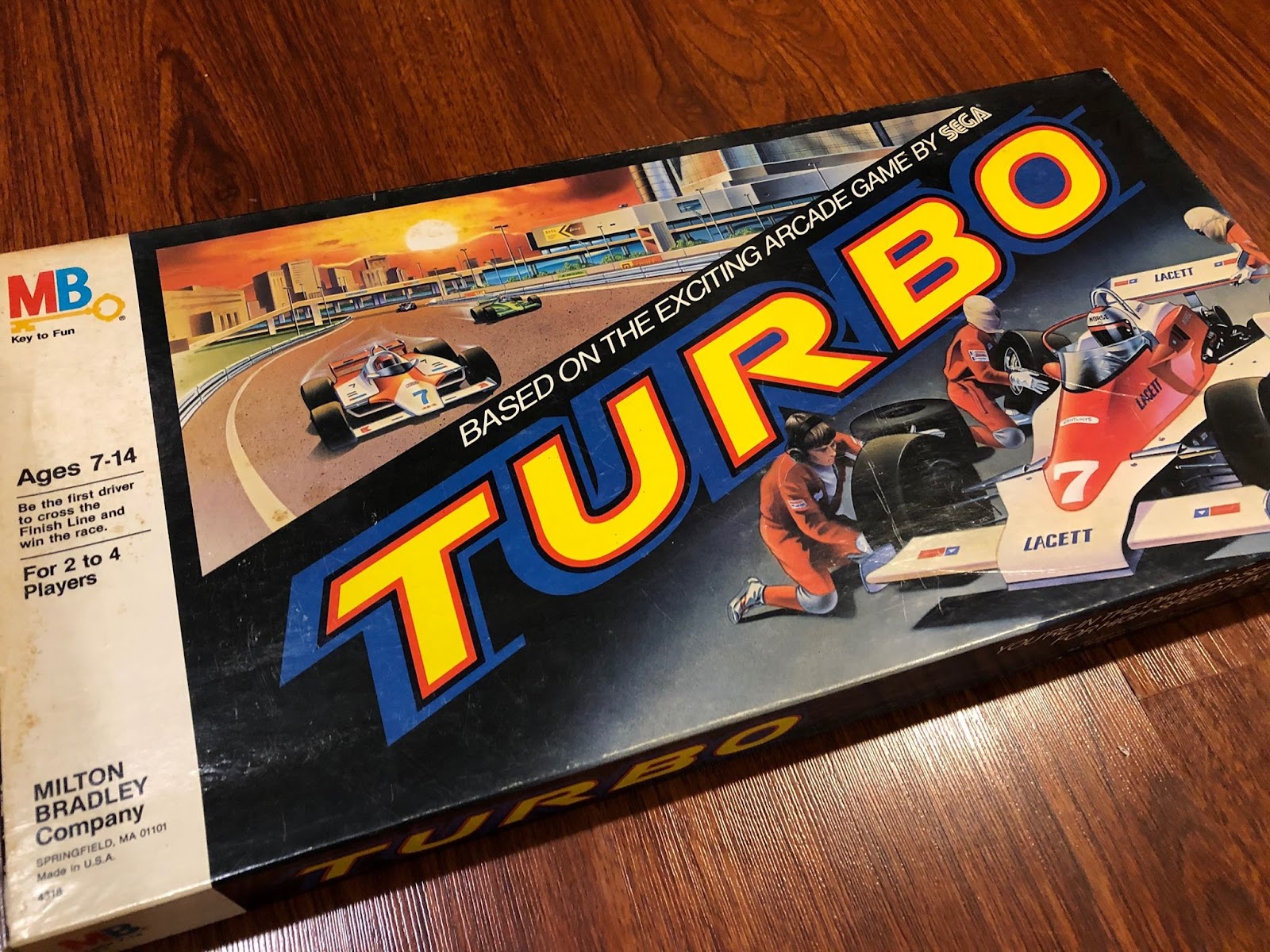 As you can probably guess, this is a racing board game, which seems like kind of a weird thing when you think about it. Racing is about constant movement, which isn’t really possible on a board game like this. But I know a Pole Position board game also exists in the world, so I guess the fine folks at Milton Bradley figured it out at some point. 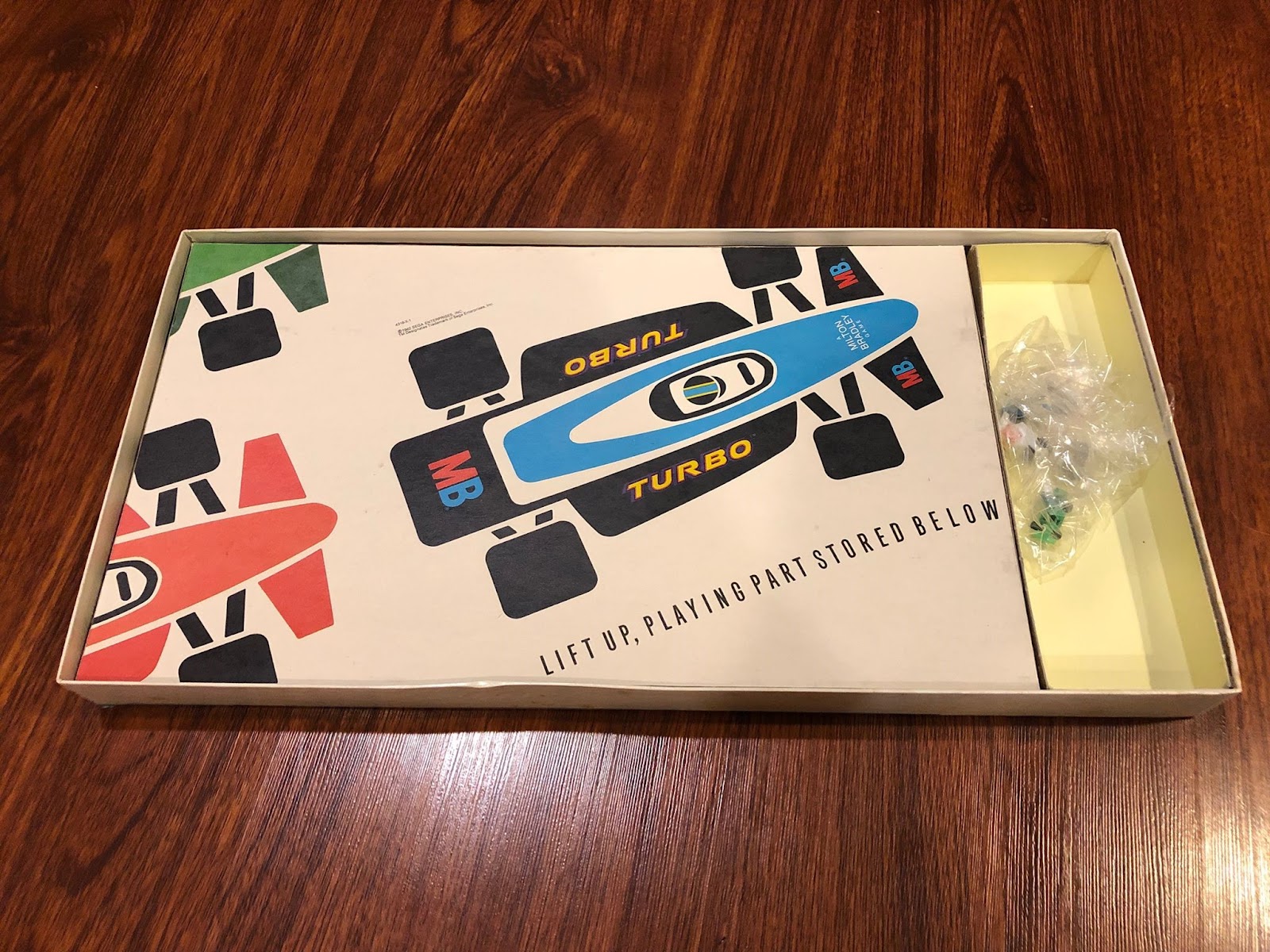 When you open the box, you are greeted by this awesome image. I love the artwork in these weird old things, and for some reason this one just tickles me. Anyway, having spent no small amount of time with MB’s previous board game adaptations, I expected there to be a whole mess of wacky stuff under this thing, but no. It was just a spinner. Well, technically a pair of spinners. More on that in a bit, though. The only other parts were in that crumpled up plastic bag on the side. Already I’m equal parts thrilled and pensive. On one hand, fewer parts means less complicated rules (theoretically), and after trying to play Zaxxon with my son before, a simpler experience sounds like a much better time. On the other hand, if the game’s too simple it might be boring. And while I didn’t exactly blow a ton of cash on this game, I’m always way happier when the games are actually fun to play. Thankfully, like I said before, this falls in the fun to play category. 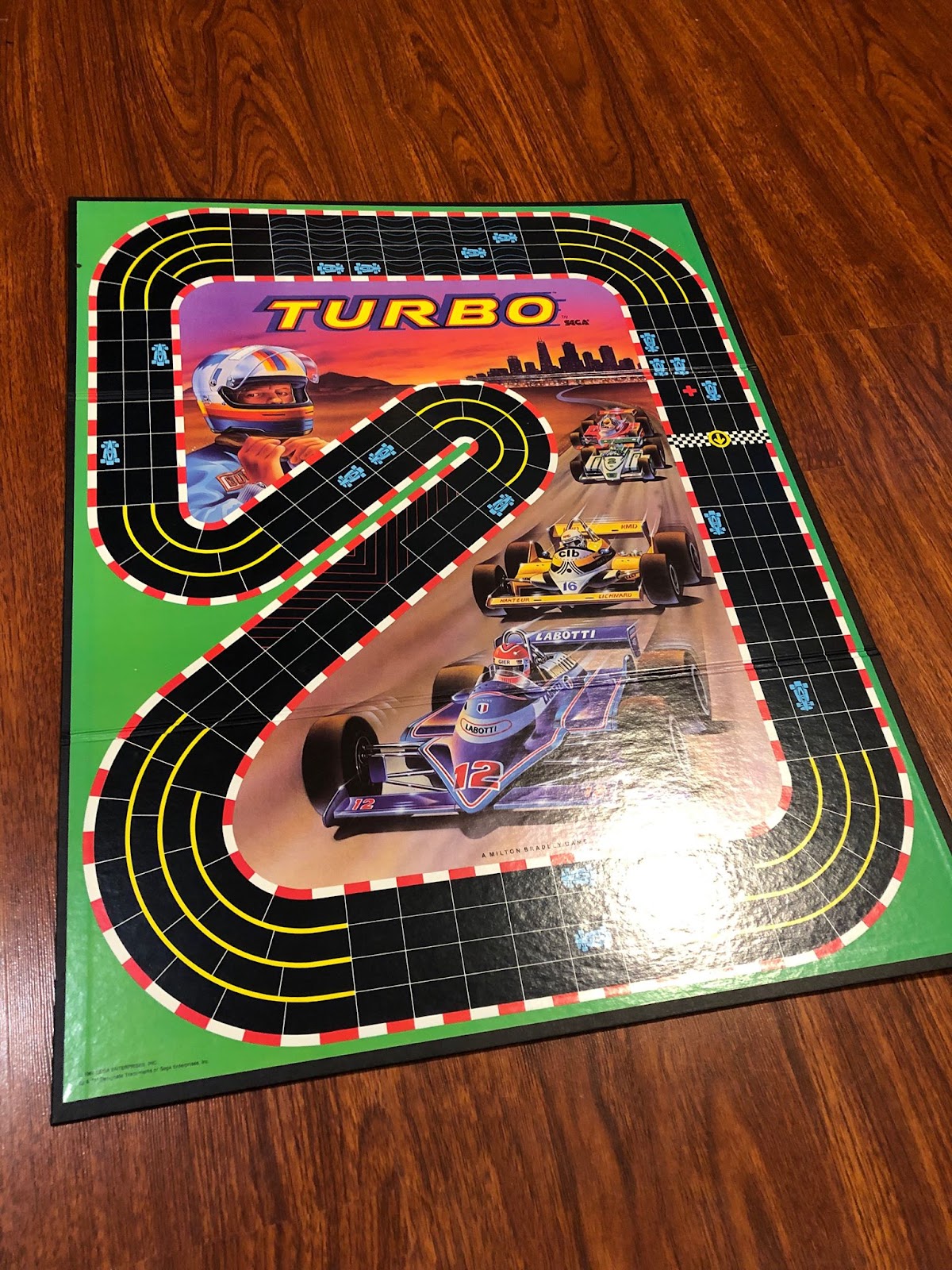 Surprising no one, the board itself looks like a racetrack. I have to say, I really love the artwork here. It’s a great design, with the driver looking all cool inside the sharp turns at the top, and the cars look awesome with the speed lines and whatnot. It’s a pretty big board, too. It’s a trifold sort of thing, so it’s a bit longer than your typical board in a game like, say, Chutes and Ladders.

The track is 4 lanes, and it’s designed to work like a real racetrack in that regard. The inside lane, or pole position, is the shortest distance from the starting line to the goal, while the outside lanes will make your journey around the track longer. You can also see the blue car icons on the board, and they work as sort of barriers. They can be driven past, but you can’t end your turn on those spaces. Then there are areas with track conditions. The thick yellow lines around the turns mean you can only change lanes inward toward the pole position, whereas the rest of the board allows you to change lanes in whatever direction you want. The red area is a sort of bottleneck. Basically the areas with the red lines you can’t drive on, so if two players are close to one another at that point, only one will be able to pass at a time. Then there’s the part with the blue wavy lines, which is the icy patch. This area is a total game changer, so I’ll go into that in more detail in a bit. But the basics are that any car can move in any direction here, even backwards. Finally there’s the red cross spot near the starting line, which is where the ambulance goes. Which makes this the perfect time to talk about the game’s pieces. 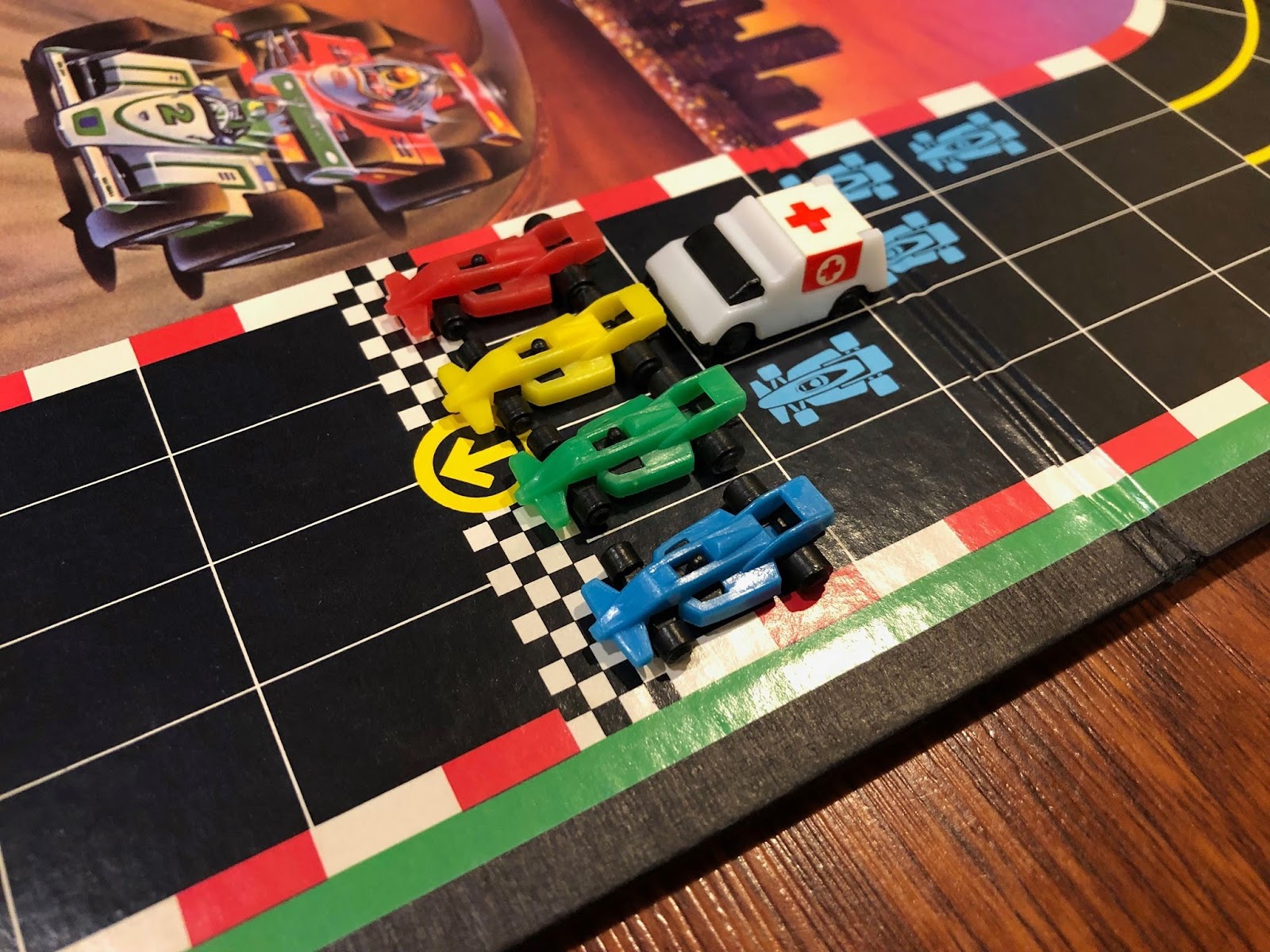 You can play up to four players, which after playing a 2 player game I can say would probably be a lot more chaotic and fun. Each player picks a car and their placement on the track is determined by who spins the highest number. Cars can either move straight ahead one space at a time, or move diagonally ahead to change lanes. Two cars can not occupy the same space, and you can’t land on one of the blue car spaces, so you have to either drive around, or get stuck, shortening the number of spaces you can move on your turn. Then there’s the ambulance, which works as a sort of moving hazard throughout the game. The same rules apply to it as do to your car, except it can’t actually win the game because, well, it isn’t racing. It’s got lives to save! 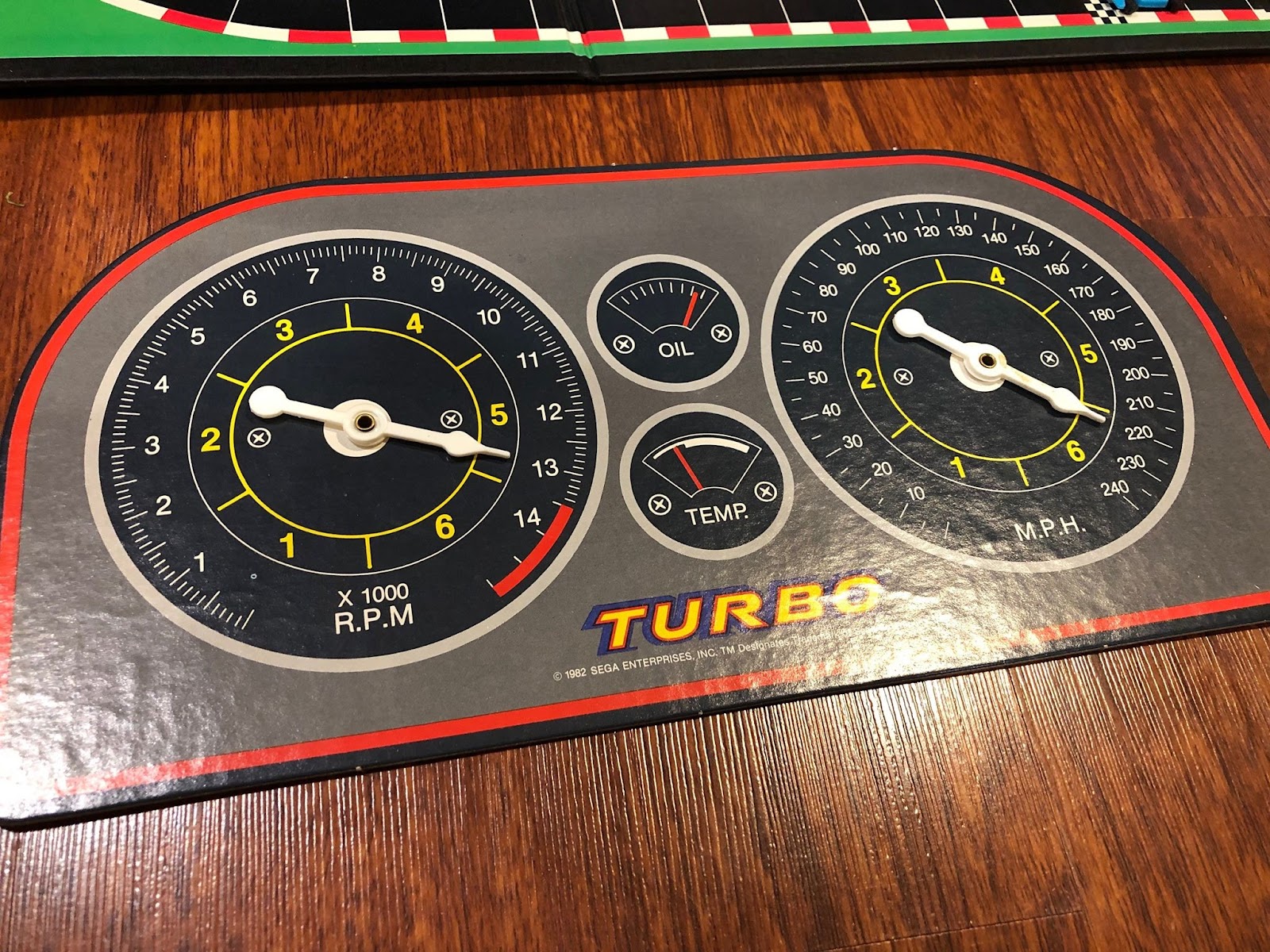 Now back to the two spinners. On each player’s turn, they have to spin both of them. One spinner determines how many spaces you get to move your car, and the other spinner determines how many spaces you move either an opponent’s car or the ambulance. That’s where the strategy comes in. Since you can’t just move your car, you have to put some real thought into which other piece you’re going to move. Sometimes moving the ambulance to block your opponent is the right move. Sometimes moving your opponent’s car out of the pole position will be best. You can choose which spinner corresponds to what move on your turn, so there’s plenty of room to strategize. During our playthrough, neither of us touched the other player’s car because it didn’t make much sense to. Since you can’t move backwards, any movement on someone else’s car gets them closer to the finish as well, so the ambulance pretty naturally kept pace with us as we went around the board. That is, of course, until we got to the icy patch.

Like I said earlier, when your car is on the icy patch, you can move them in any direction, even backwards, and this is where chaos ensued. We went back and forth moving eachotehr’s cars, trying to maneuver our way out of the icy patch for a solid bunch of turns. Sometimes we moved the ambulance to try and block someone from getting out of the patch, other times we dragged each other back from one end to the other. This is such a clever piece of the game it kind of blows my mind. Its placement right toward the end of the track leaves just enough afterwards so that a few bad spins can still leave tailing players a chance to win, but it doesn’t necessarily negate the strategy leading up to it either. And the amount of spaces a car can move on any given turn, and the fact that you have 2 chances to get a high numbered spin, means that the game is remarkably well paced. We only played it the one time so far, but it seems like it’s kind of tough to wind up in a situation where one player is miles ahead of the others. Color me impressed. 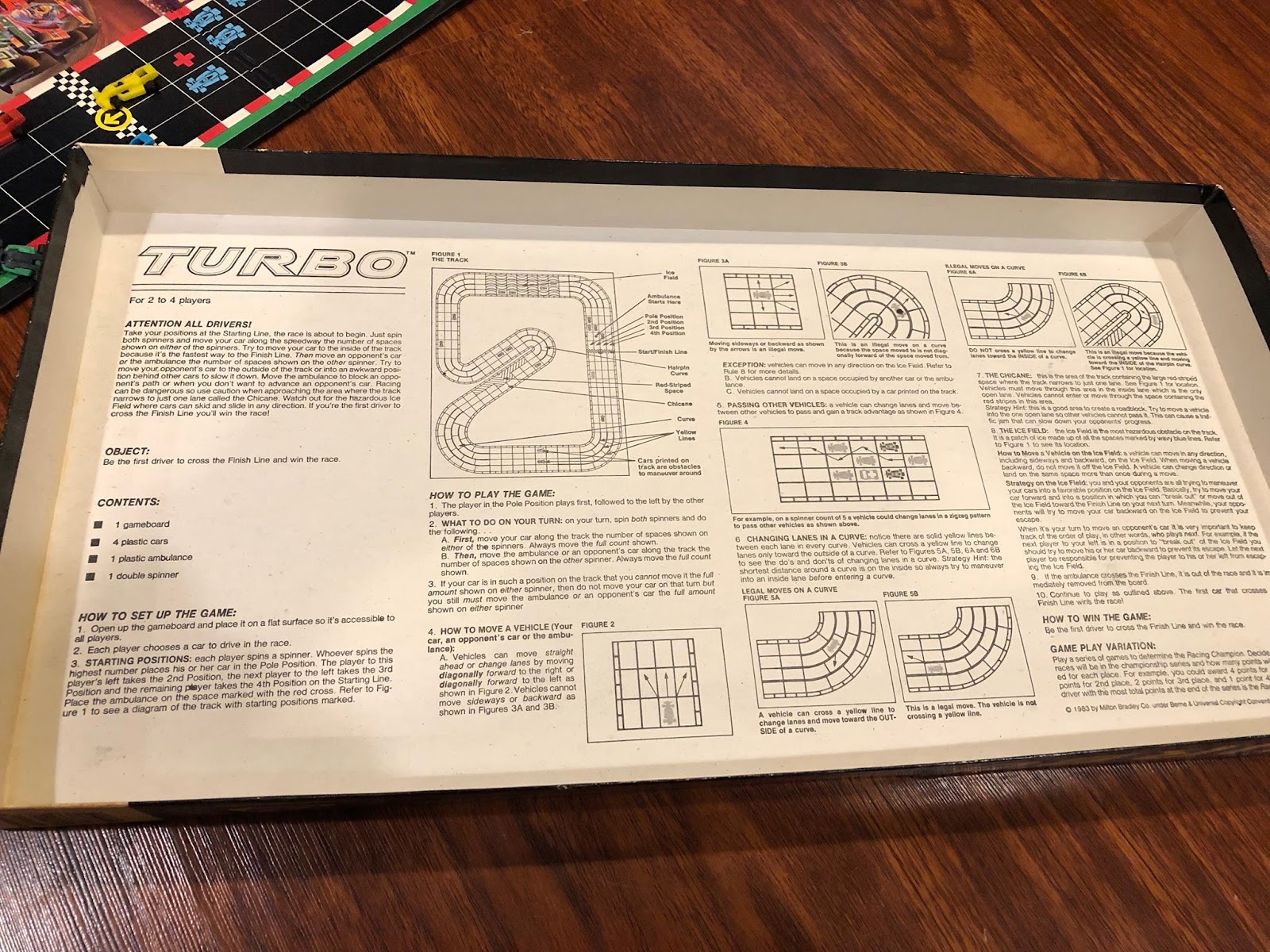 I also have to give a special shout to the game’s instructions being printed inside the box lid. I love it when games do this. It might not be the most accessible option, but at least the instructions are way harder to lose like this!

And that’s pretty much all there is to it. It was a really fun game and I can’t wait to play it again. Of course, after we were done, my son and I were curious to find out exactly what kind of game Turbo is, so we went over to my trusty Raspberry Pi and booted up the arcade version, and I have to say, this is a very faithful adaptation. 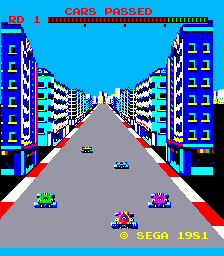 The game itself plays from a behind-the-car perspective, which wouldn’t really work in board game format, so the switch to top down is a sound one. Outside of that it seemed to just be a pretty straightforward racer. There were turns, ice areas, the whole shebang. They even have these bits where an ambulance rides through and you have to stay out of its way, which I think translated very well onto the board game. Well done, Milton Bradley!

I can’t recommend this one enough. The arcade game seems more or less forgettable, but this board game is super fun. It’s over relatively quick, and setup is almost nonexistent, which makes it perfect for short play sessions. It’s not very expensive either. Seems to hover around the $25 mark on eBay. Well worth it to me.

The other game I got at TooManyGames was Tetris. It looks freaking weird, and I haven’t tried to actually play it yet. I’ll check back in a couple weeks with my review. But honestly, it’s going to be tough to beat Turbo.