Video games are often great starting points for board games. Heck, this is probably the 7th or 8th one of these things I’ve written, and while the results are usually hit or miss, I really had no idea what to expect out of this one. On one hand, Tetris as a board game seems like complete insanity, what with its constant moving parts and literal disappearing blocks. On the other it seems like a perfect fit because puzzles exist, and there’s got to be a way to game-ify that kind of thing, right? Well, both hands were sort of right. Tetris is neither an amazing revelation of brilliant game design, nor is it a complete failure (like Milton Bradley’s Donkey Kong). What it is, is a simple, fun design that might not last you all night, but still manages to be worth your time.

I picked this game up at the same time as the surprisingly awesome Turbo at this year’s TooManyGames. Unlike Turbo though, I actually remember seeing this game in stores when I was younger. I may have even put it on my Christmas list one year, but I never got it. I have it now though! Take that, unfulfilled holiday wishes! 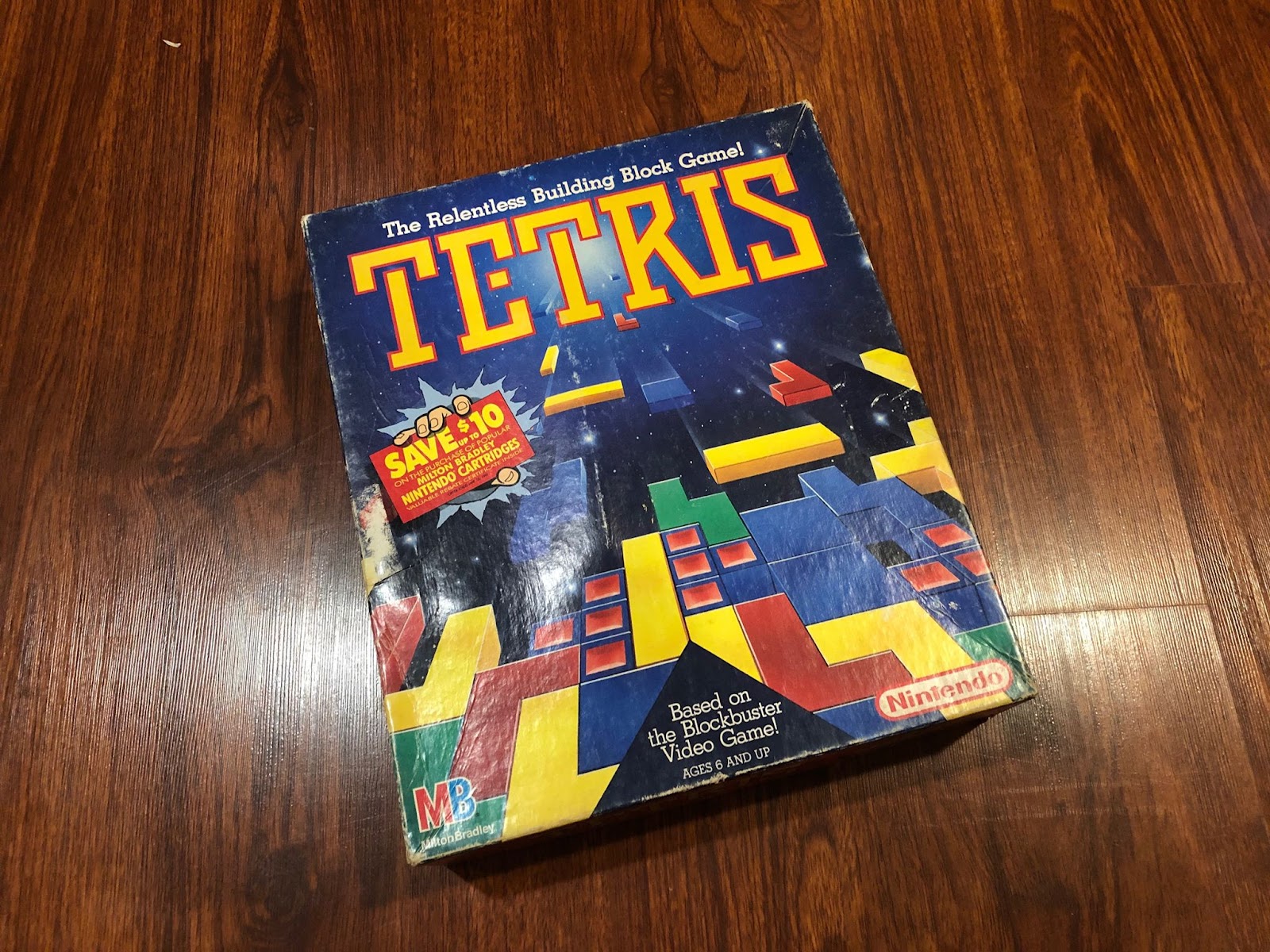 The first thing worth noting here is that this is very much inspired by the NES and Game Boy release of Tetris from Nintendo and not the arcade release. Even the box art here is just a slight recolored version of the same image from Nintendo’s games. The colors haven’t been changed all that much, but they’ve definitely been altered a bit to match the pieces in the board game. Nice touch, guys. But I think my favorite thing is the coupon for $10 off Milton Bradley Nintendo cartridges. The only one I could think of off the top of my head was Marble Madness, but after looking at the rebate certificate, I totally remembered those gray labels on Cabal, Captain Skywawk, etc. I love it when I come across old coupons like this. Anyway, back to business. 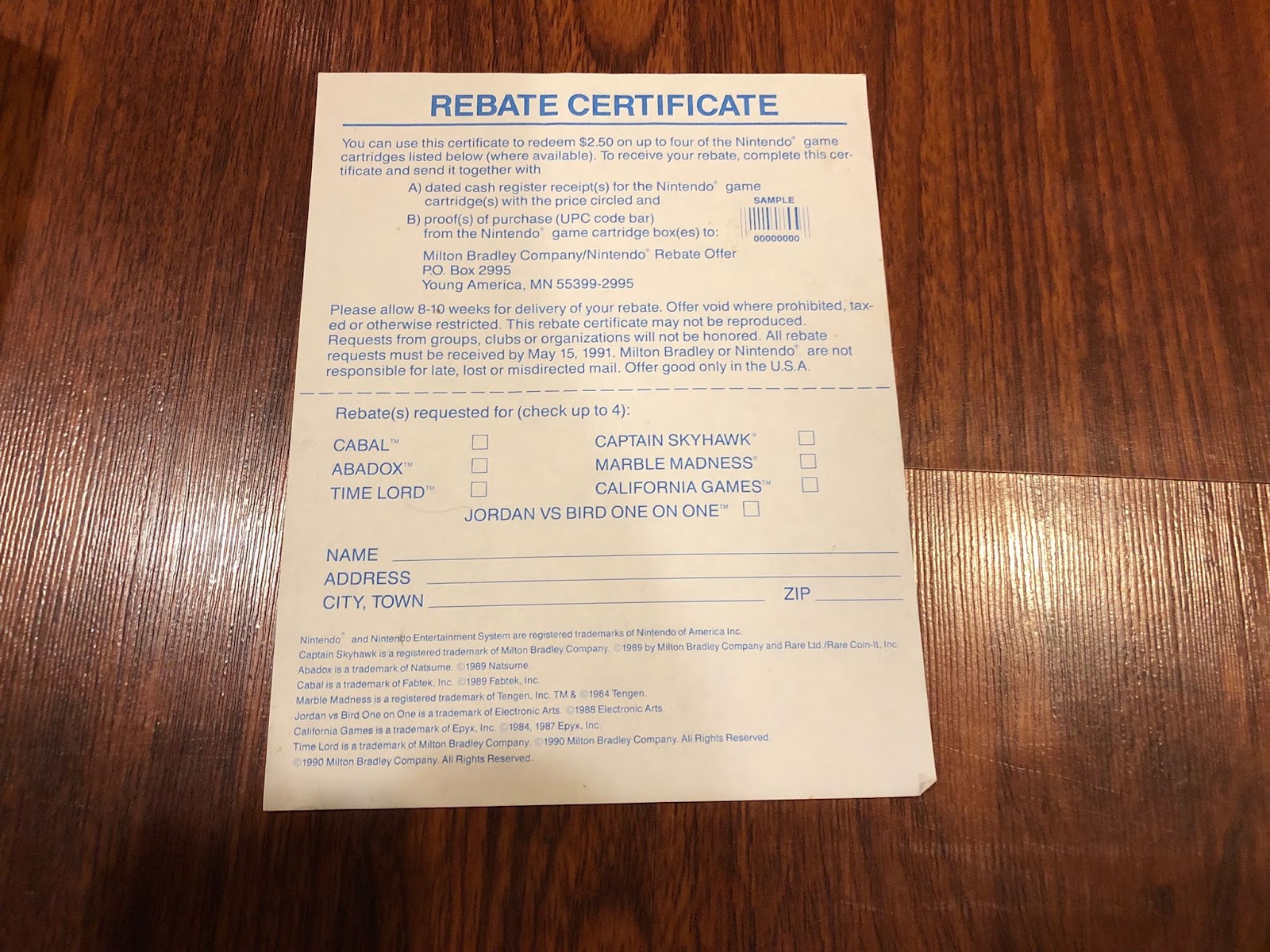 When I first opened the box for this game I assumed it was going to be super complicated. There were cardboard pieces everywhere and I couldn’t immediately see how they all fit together. Since this was a used game, I’m assuming there were some pieces missing that would have kept the innards a little more contained. Seriously, it was a mess. 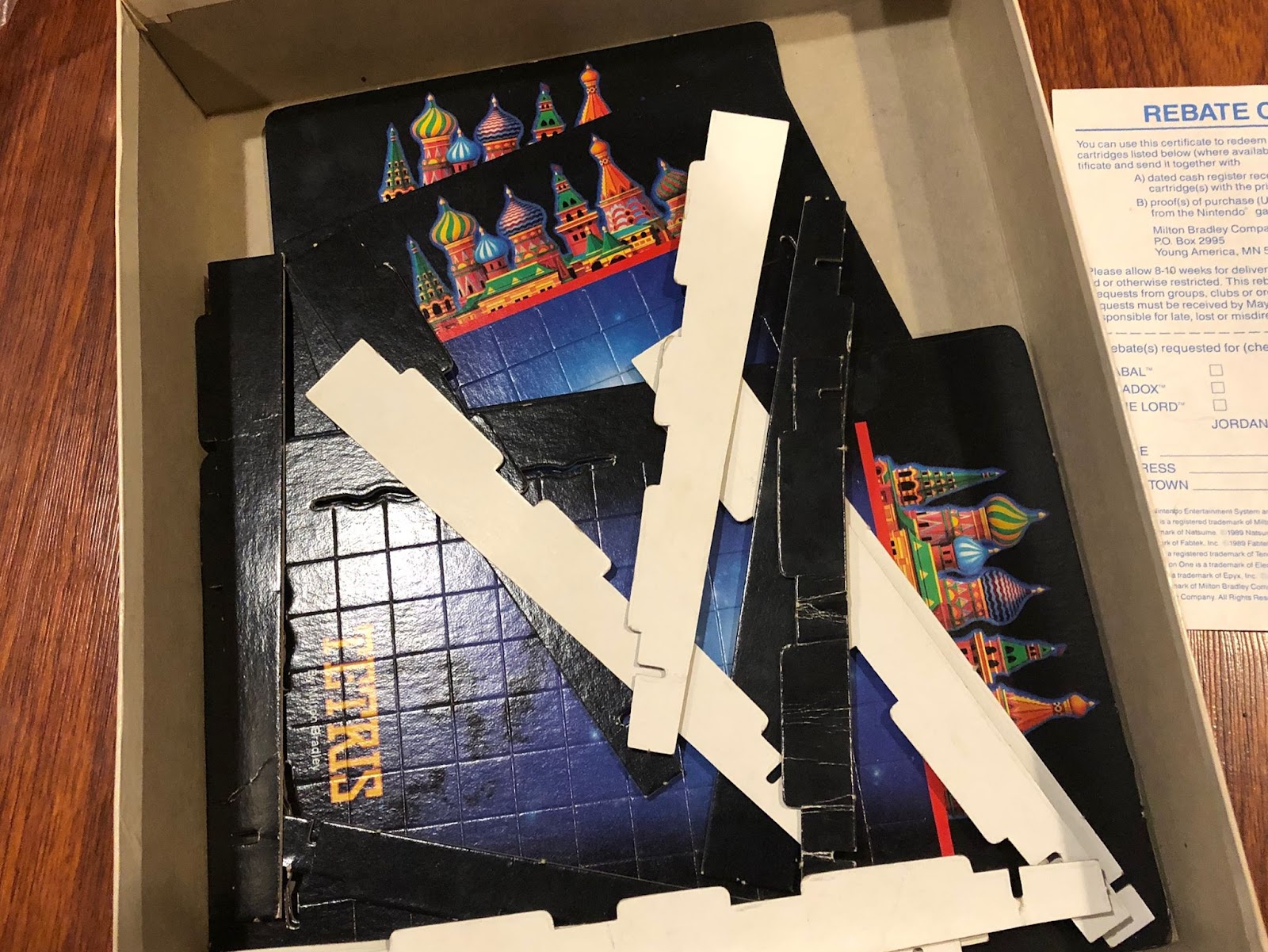 Fortunately, the instructions weren’t hard to find, so my immediate anxiety was quelled. I put the lid back on with the expectation that I’d eventually have the time to sit down with it and learn how it works, assuming it was going to take a decent amount of time. I started thinking of the fundamentals of Tetris and how they could possibly translate to a board game. How could lines possibly disappear while using physical blocks? How do you take turns and interact with other players? The answer turned out to be pretty simple, really. You don’t.

The Tetris board game is almost comically simple. It basically boils down to competitive puzzle building. The game can be played by up to four players, and each player gets their very own Tetris well. All those crazy cardboard pieces I was so concerned about were far easier to figure out than they seemed at first glance. Basically, they make up the walls of the well, which are where the Tetris blocks go, just like in the video game. Then there’s a box that goes in the middle of whatever play area you’re working with and that gets loaded with all of the cardboard Tetris blocks. These are all shaped like the Tetriminos featured in the source material, with no crazy deviations to throw you off. There were a lot of Tetris sequels that liked to throw fancy new shapes at you, but this board game si strictly built around the original recipe, which is more than fine by me. The object of the game is to take pieces out of the center box and place them in your well as tightly as possible. Everyone plays at the same time, and it’s essentially a race to the top, so sifting through the box to find the pieces you want will cost you precious time against your opponents. Where in the original game the point was to keep making lines so you never reach the top, in the board game you want to pack it like you’re making lines, but the first person to place a block over the top of their well ends the game. Once this happens, everyone has to stop taking pieces and the person with the fewest uncovered areas in their well wins. The play fields are set up like a grid, so every block has its place. Simple, yet effective. 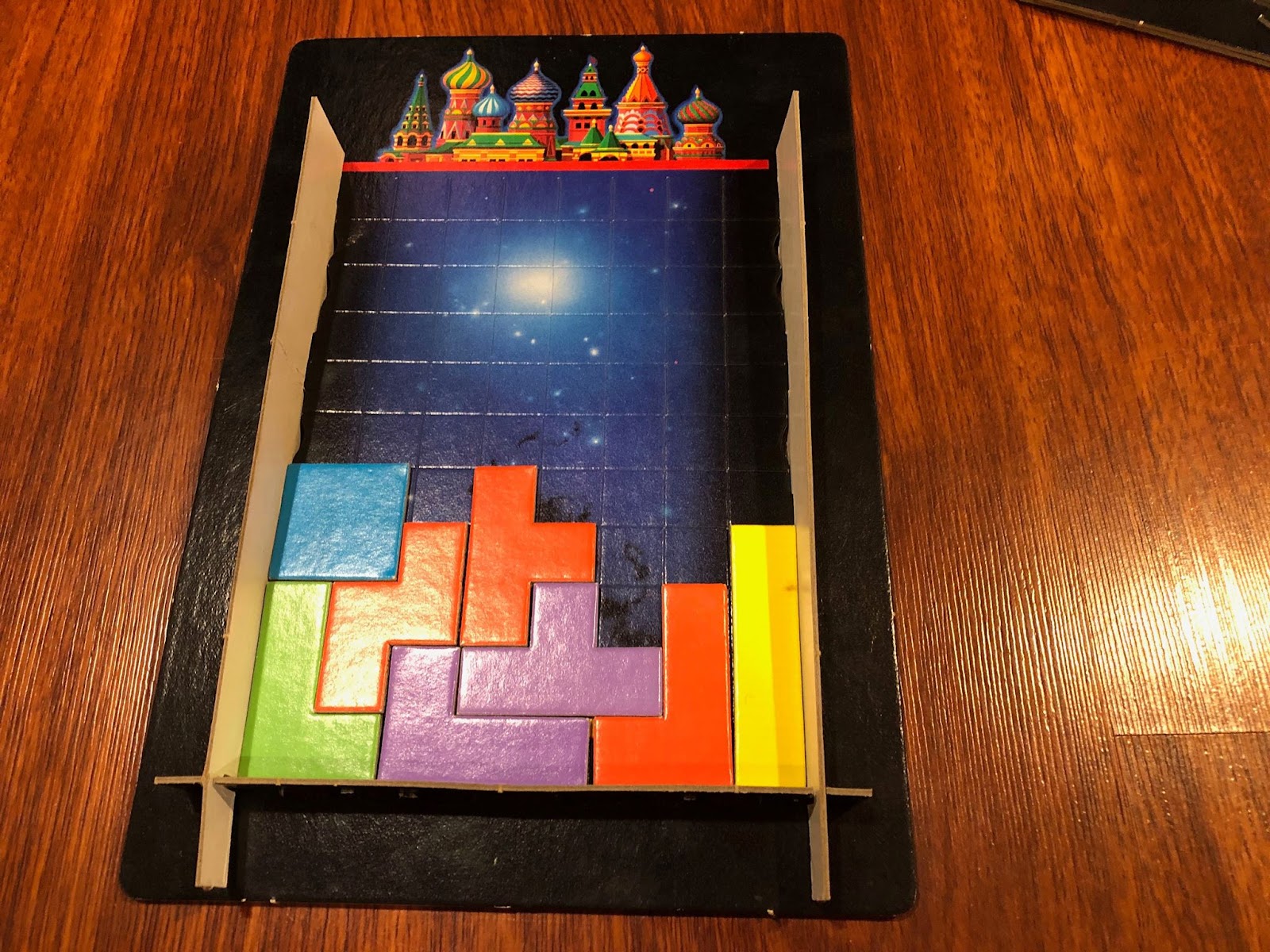 And that’s it. That’s the whole game. No crazy images to study with fascination, no ridiculous plastic pieces, no dice, no spinners, no insane rules that make the whole thing super complicated, no nothing. Just quick and simple fun, and honestly that really works. When I read the instructions I thought it was going to be pretty stupid, but when my son and I actually started playing it, the fun factor became apparent almost immediately. I can see it getting boring after a couple of rounds, but as a quick thing to play with some friends, especially of similar Tetris skill levels, this makes a great opener for a game night. Good job, Milton Bradley!

The one caveat to this, at least in the copy I have, is that the wells take a little bit of effort to build, possibly more than the amount of time you’ll spend with the game is worth. They don’t actually fit in the box after they’ve been assembled, so you have to take them apart whenever you’re done playing, and while they aren’t exactly the most complicated things on the planet, they aren’t the most intuitive things either. It seems to me there might have been a better way to do that aspect of the game, but it’s a minor quibble in an otherwise excellent package. I also like how they’re all built out of cardboard instead of hard plastic. It does make it a bit less durable in the long term, but hey, less plastic is almost always a good thing, right?

UPDATE: Turns out I’m an idiot. I took the photos for this article after I had written it, and when doing so I noticed that there are specific instructions for how to stack the completed Tetris wells into the box. It’s not small either. Not really sure how I missed it the first time around. They fit like a glove. So remember kids, always read the instructions! 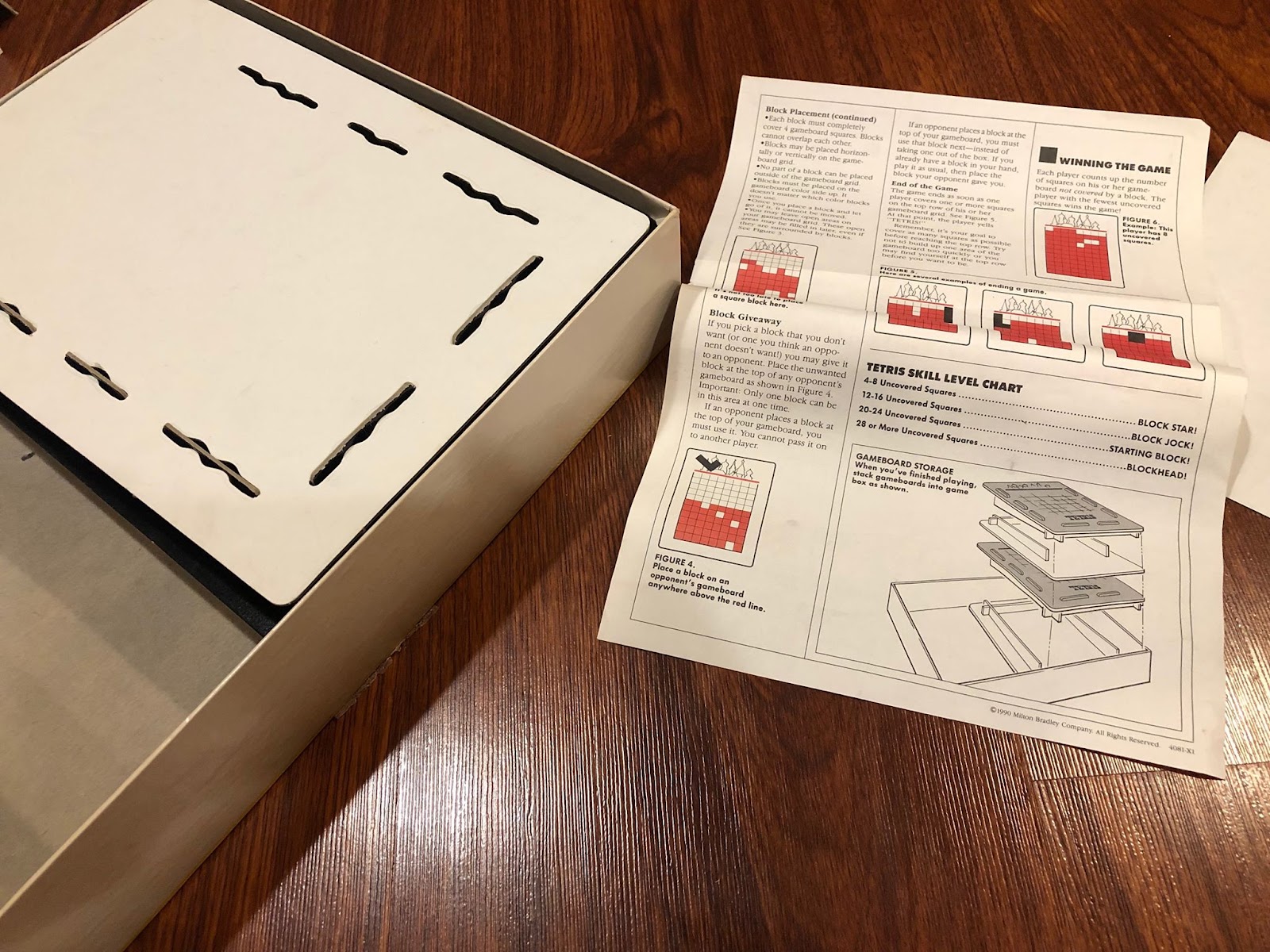 It probably won’t come as any sort of real surprise to you to learn that this is not the only Tetris board game on the planet. Not by a longshot. I did a quick search on boardgamegeek.com and found a litany of other Tetris games that all look strikingly different from one another. Tomy made one (also in 1989) that seems to have been released only in Europe. It’s a 2 player head to head game where you press a randomizer that tells you which piece you have to pick up on each turn. It actually looks really cool. In 2011 a game called Tetris Link appeared that involved a vertical well that you dropped plastic pieces into like Connect Four. There’s a Tetris card game, Tetris Bop It, Tetris Jenga, and the list goes on and on. Pretty neat stuff, really, and after having the fun I had with this one, it makes me sort of want to track a few of them down. I still have plenty of other Milton Bradley games to find first though, so maybe I’ll keep that on the back burner for now.

What about you? Did you have any Tetris board games?