Now this is more like it. There have been some real duds in my board game lineup, including the abysmal Mario-fueled Donkey Kong, but this one here is way better. It’s far from a perfect game, and it isn’t exactly the most fun thing on the planet, but it’s got charm, and some wacky artwork, so it’s cool by me. It’s also fueled by some serious nostalgia, as it’s actually my game from when I was a kid.

The first thing I have to say about this game is just how freaking strange the board itself is. It’s in 4 pieces for absolutely no discernible reason. I distinctly remember when I bought it, it folded in half like a regular board game, but there were also three perforated lines between the stages. It didn’t take long for one of them to just fall off, so I went ahead and pulled the other ones apart. But there’s no advantage to having the game in four pieces! They literally connect at the end of each stage. Why was this a thing? It confused the crap out of me then, and it still confuses me now. 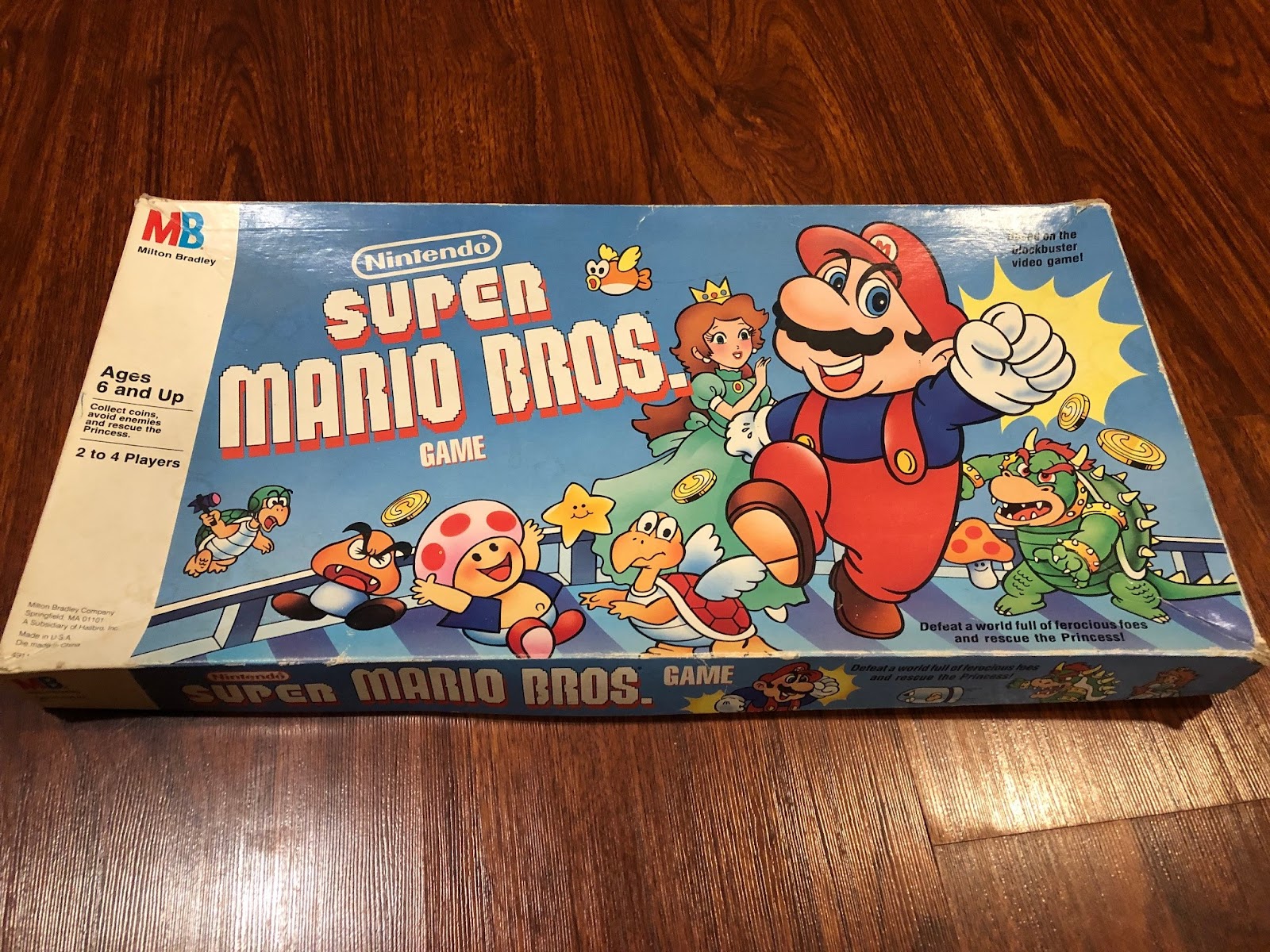 While we’re here in the land of strange things, let’s have a look at the box art. The artwork on some of these game boxes has been kind of all over the map, but this one here is pretty darn good. It all seems to be made up of official Nintendo artwork, and while I’m not sure where it’s supposed to be happening geographically (are we on a bridge? Is that poor Hammer Brother going to be okay?) this is a really great cover. Heck, it’s better than the US NES box art in my opinion, except for one very strange issue: What’s up with the Princess? Where did the green dress and brown hair come from? There are one or two other little things in this game where the colors are a tiny bit off, but these are hardly egregious errors, nor are they even that far off. But this, there has to be a reason, right? Maybe they were only supplied with black & white art to work with and they had to put together their best guesses for color? No, that can’t be it. 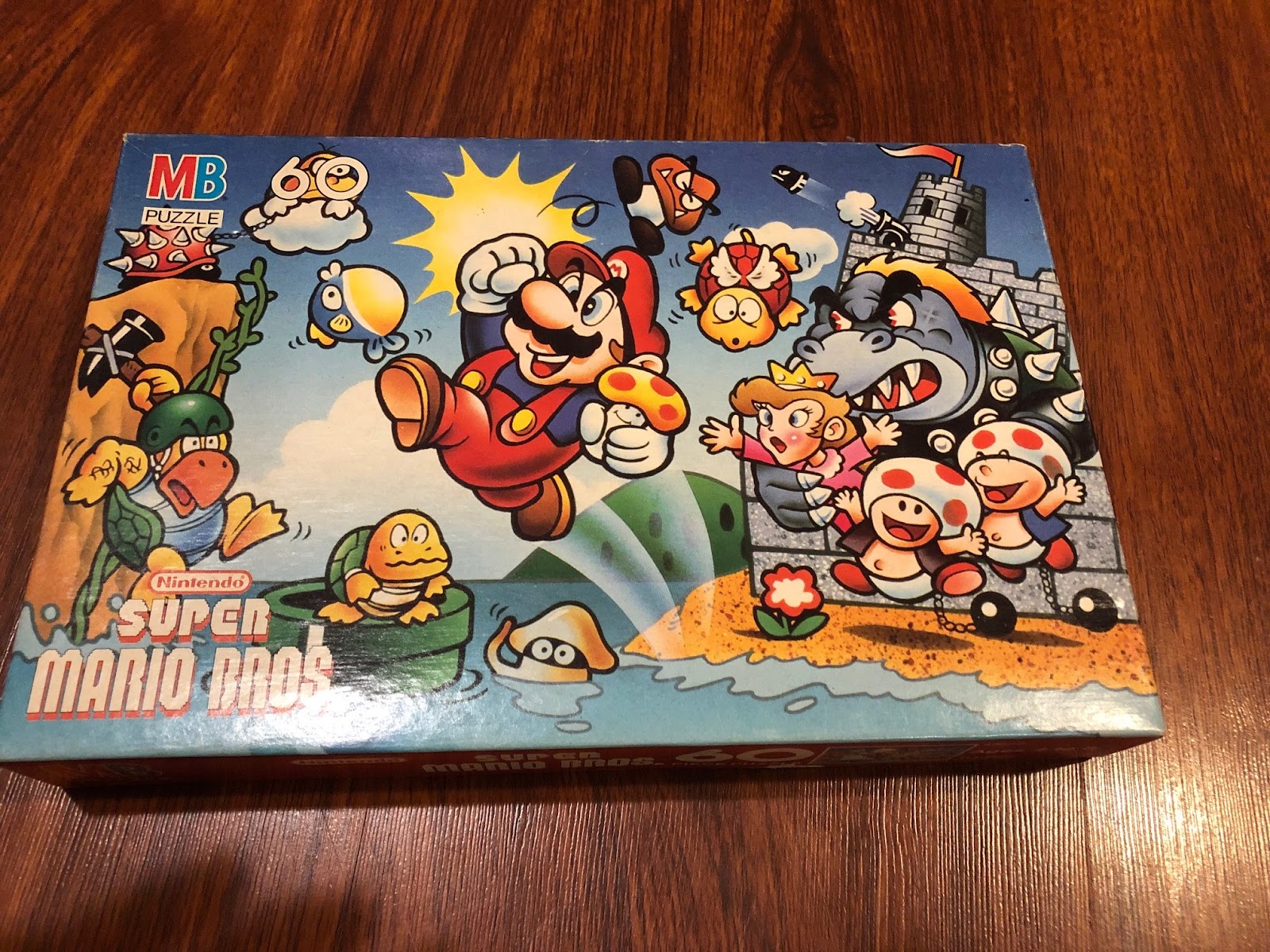 Because Milton Bradley also released this Super Mario Bros. puzzle, featuring the original Famicom cart’s art, and the Princess in a pink dress. Look, it’s not a dealbreaker, nor does it actually bother me at all, it’s just such a weird thing to change. I find it fascinating.

It’s also worth noting that this game is called Super Mario Bros., but Luigi is nowhere to be found. And Bowser is holding the Princess over water instead of lava, which seems more like an inconvenience than a fiery death trap. 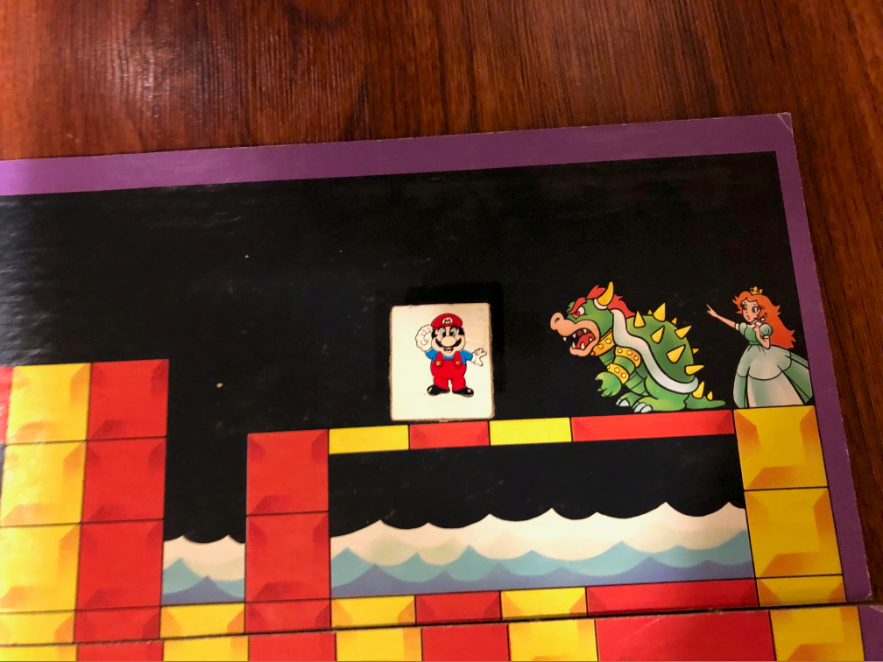 Anyway, let’s talk about the actual game. As I said before, the game board comes in four pieces, each representing a level. All players (Up to 4) control the same Mario. The object of the game is to make it to the top and save Princess Green Dress at the end of Level 4. You do this by moving Mario to either red or yellow spaces across the board. The game has a 6-sided dice (die? That word’s always confused me) with different colors on each side. There’s solid red, which means you can move to the next red space, solid yellow, which lets you go to the next yellow space, red/yellow which lets you choose which space you want to go to, and STOP, which means, you know, stop. At the start of the game, each player gets 3 cards. More on those in a bit. 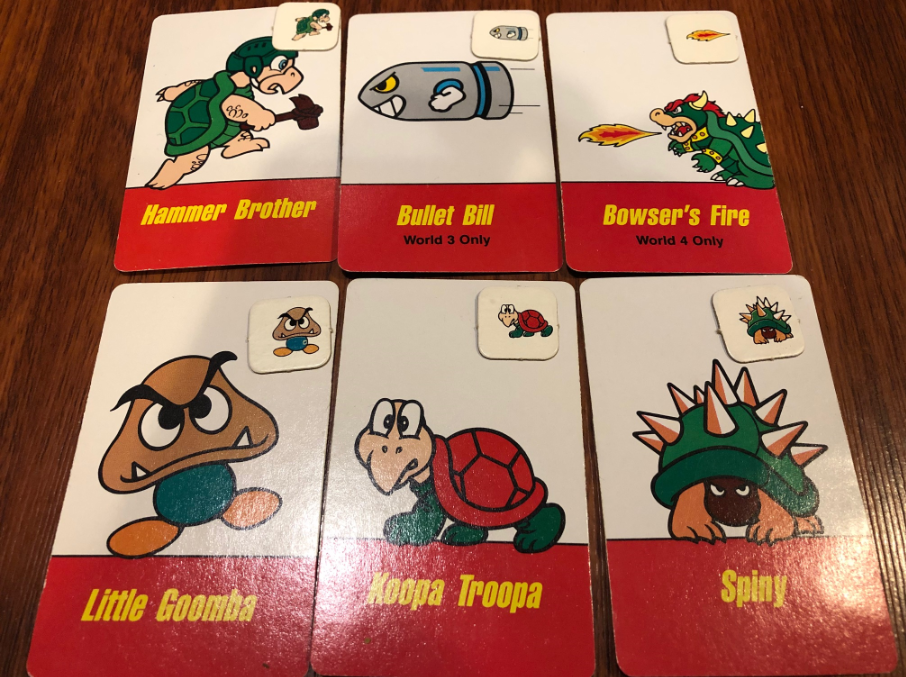 The cards are how hazards get placed. Each player can at pretty much any time throw down their hazard cards to place a bad guy on the board. The little bad guy tokens can be placed wherever you want, with the exception of Bullet Bill and Bowser’s Fire, which can only be placed in Worlds 3 and 4 respectively. Before we go on though, I have to comment on the art. Again, the actual artwork itself is fine. It’s official artwork, no question. I’ve seen these images before. But the colors are just a little weird. Like someone had seen these images somewhere before and was drawing their colors from memory. The Goomba’s green...umm...stalk?, The Koopa Troopa’s flesh-colored head and green body, the Spiny’s green shell and… I think I’ll leave whatever’s going on with his face alone. Unlike the Princess, these guys aren’t that far off, which makes their strange colors seem even weirder.

Back to business, these hazards, in addition to the permanent ones on the board like the fire bars in World 4, water pits in World 2, and so forth, cost you a life if you happen to land on them. Your only defense is to either make it past them with the right colored dice roll (die roll? Why is that word so weird?), or use a Fireball card, if you’re lucky enough to have one. 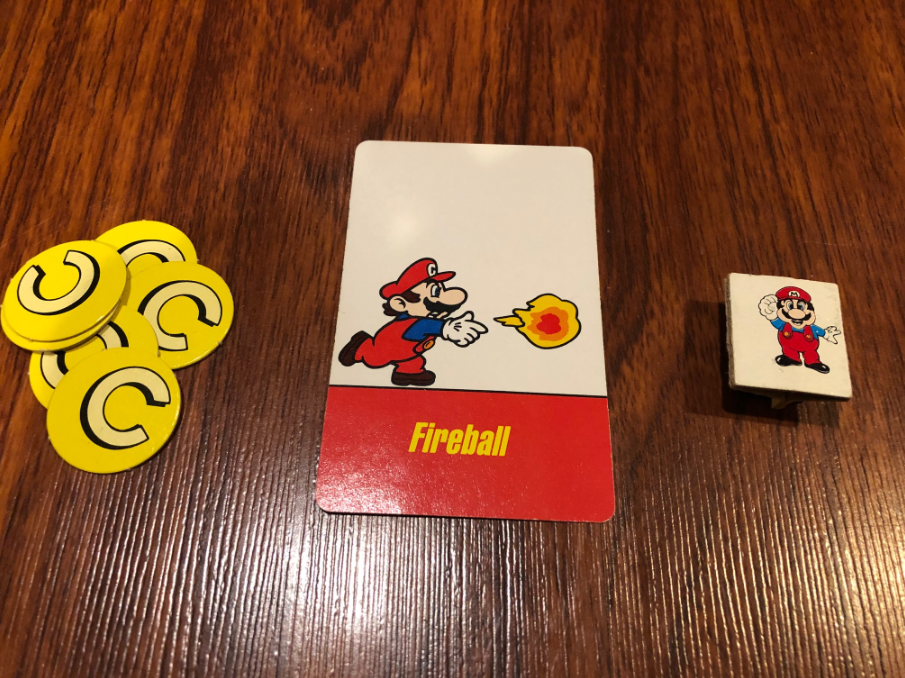 The fireball lets you take out any one enemy on the board. According to the rules, the fireball can be used on any enemy in the game, but when I was a kid, I was a bit of a stickler for accuracy, so I wouldn’t let my sister use it to kill a Bullet Bill or Bowser’s Fire. If you run into one of the hazards your turn is over unless you cough up 4 coins, then you can keep going from where you left off.

What makes this game feel a little weird when playing is that fact that the only way to actually end someone’s turn is to have them run into a hazard and run out of coins, or roll a STOP. If you’re lucky enough, you could potentially make it through a 4-player game with only the first player ever touching the board. It’s unlikely, sure, but it’s possible. Whoever is in control of Mario keeps going until they hit a hazard or roll a STOP. Really, any game where all the players control a single piece is kind of strange in my eyes, but I don’t play a TON of board games. What do I know?

As far as Super Mario Bros. being adapted into a board game, this could have been way worse. In fact, it actually was! Check this monstrosity out. 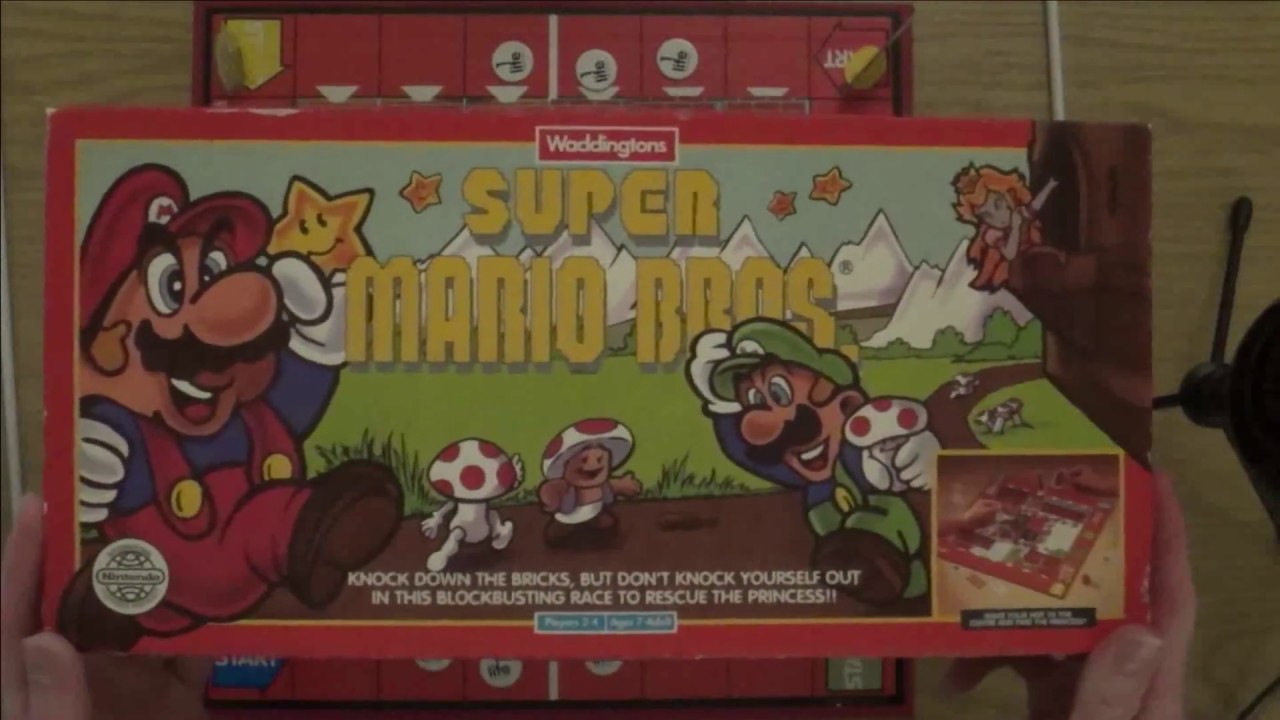 There was a whole other Super Mario Bros. board game out there from a company called Waddingtons. This image comes from a YouTube video called Nothing to Play, which is where I learned about this game’s existence. I’m not convinced that this was released in America, which would explain why I’ve never heard of it. Nearest I can tell, this game isn’t nearly as fun as the game I wrote about above, which is saying a lot because while my Super Mario Bros. game is pretty fun, it isn’t exactly my top pick for a board game to play.

Anyway, that’s about all I have to say about this one. It’s fun enough, and could have been a lot worse, but unless you’re a HUGE Mario collector, I don’t really recommend tracking it down. The next game, on the other hand, is freaking great. It’s my favorite video game board game by far, and even though it’s pretty simple, I always have a blast playing it. So I’ll be back in a few weeks with my final “Feeling Board” segment about The Legend of Zelda board game from Milton Bradley. In the meantime, have you ever played Super Mario Bros.? Do you have any fond memories of playing it as a child? Do you know why Peach’s dress is green?